Timing & Location Of Closed Low Crucial
To Heaviest Snowfall Totals & Who Gets Them. 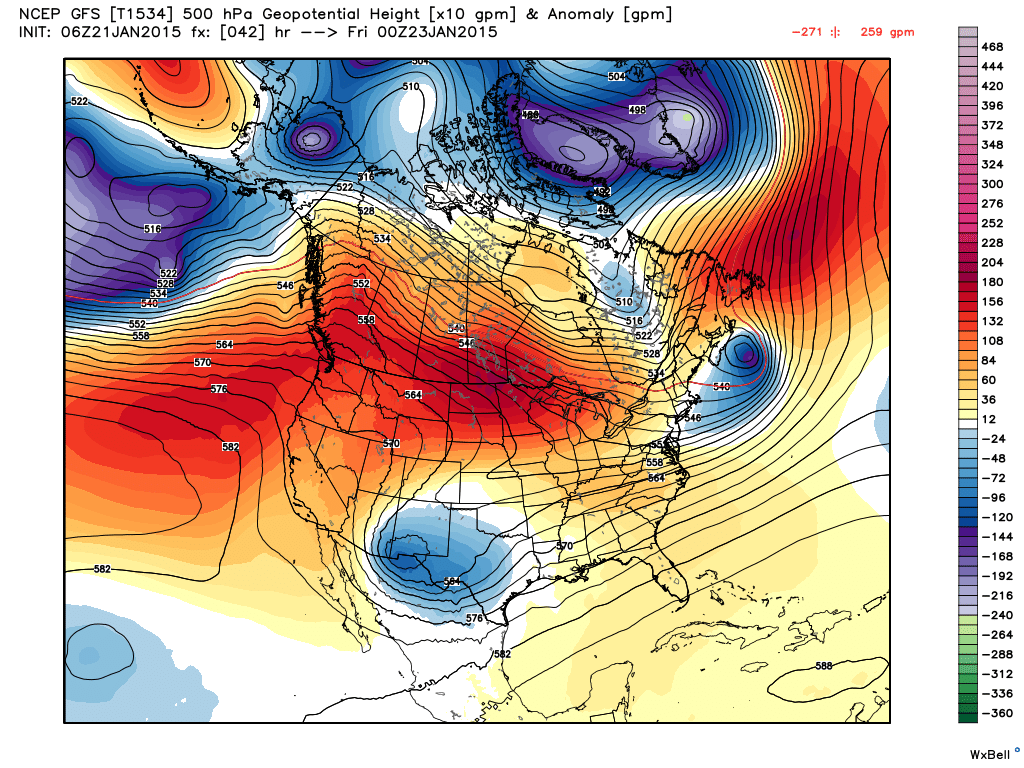 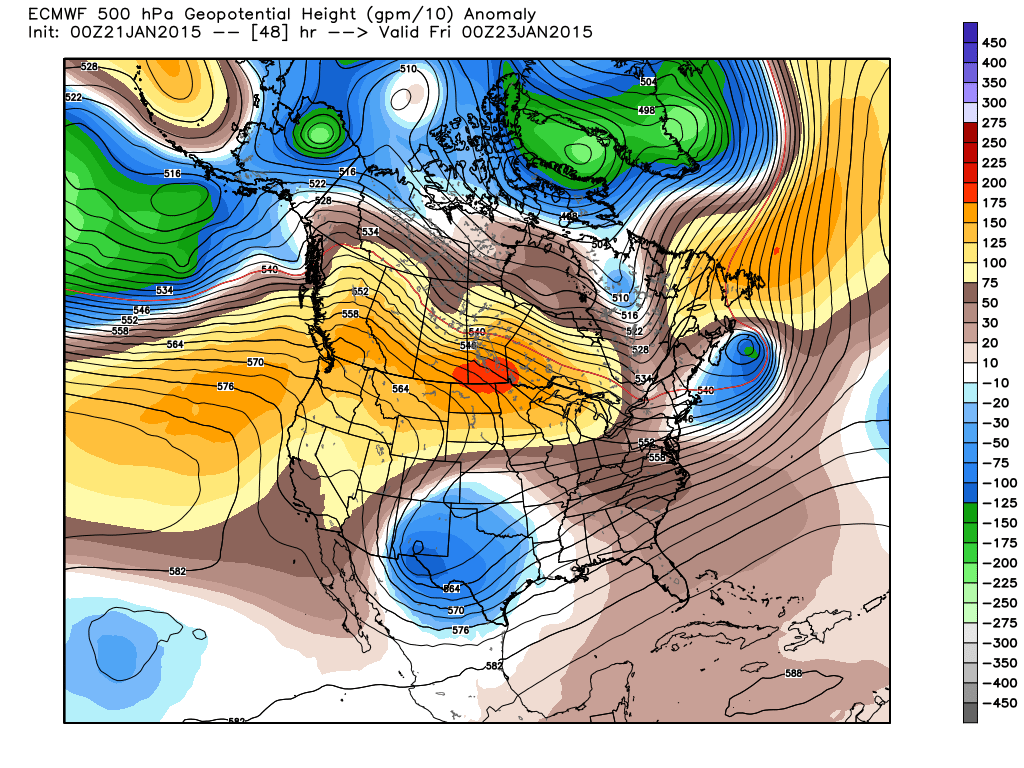 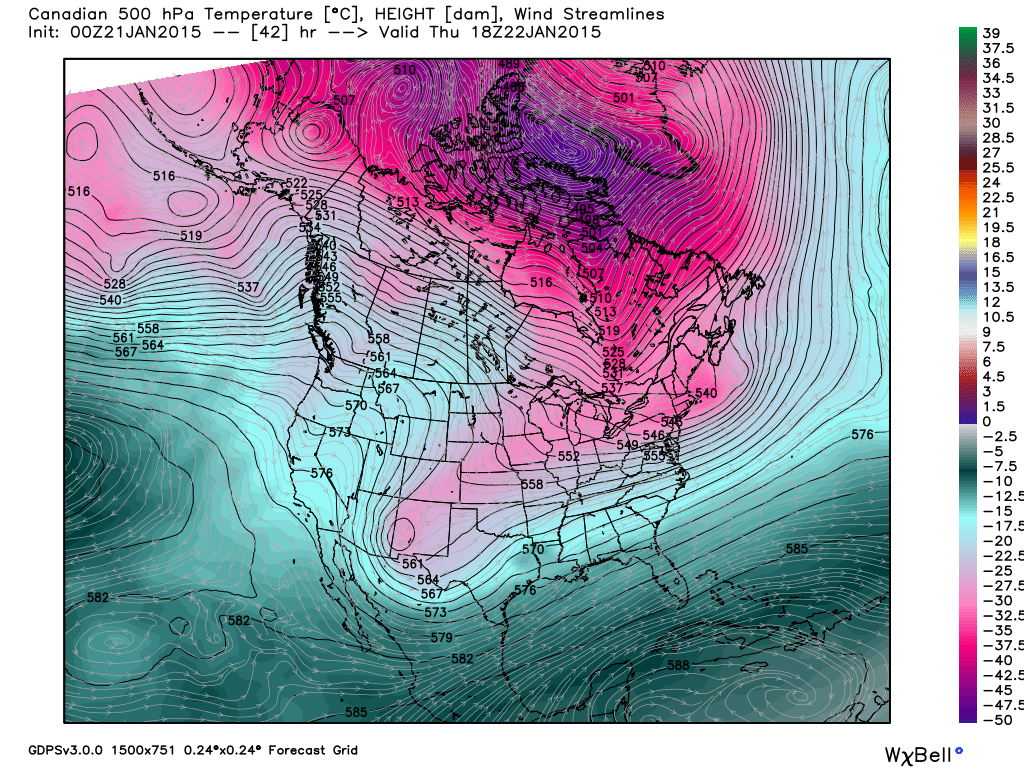 Now that the above is clear as mud this all could change somewhat. As always the fly in the ointment will be just how far south the closed 500 millibar low tracks, if it lingers over southern New Mexico or northern Mexico, and its speed and track when it begins to pull away from the state. This will be one of the key factors in just how much snow falls in southern and southeastern New Mexico. 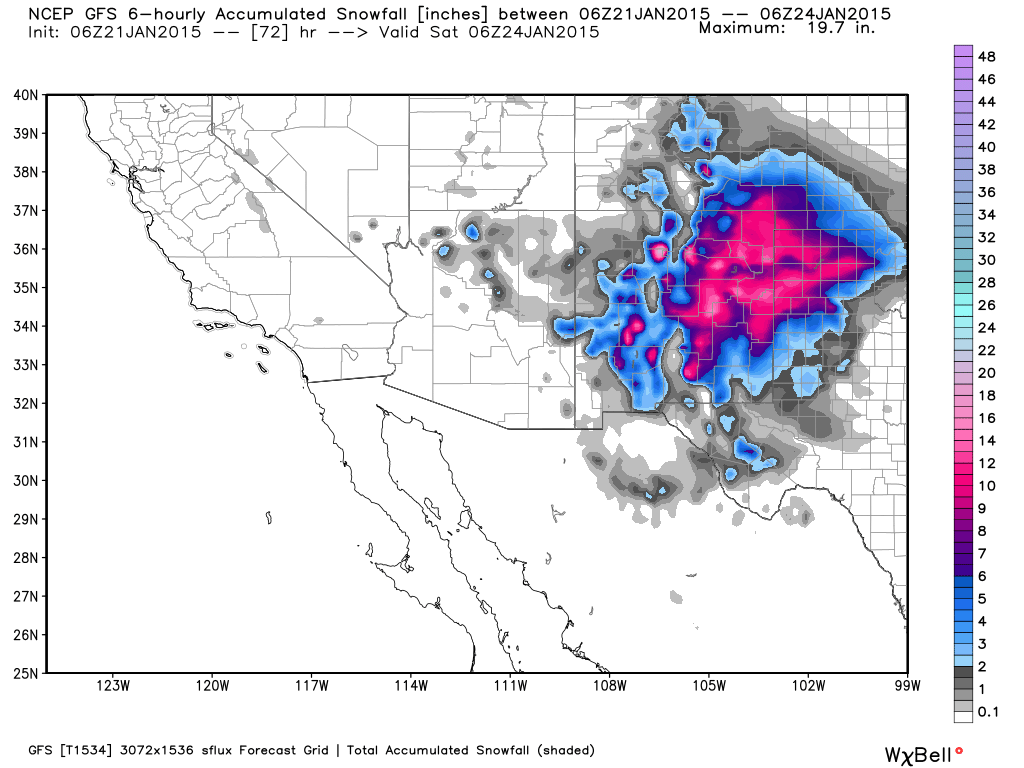 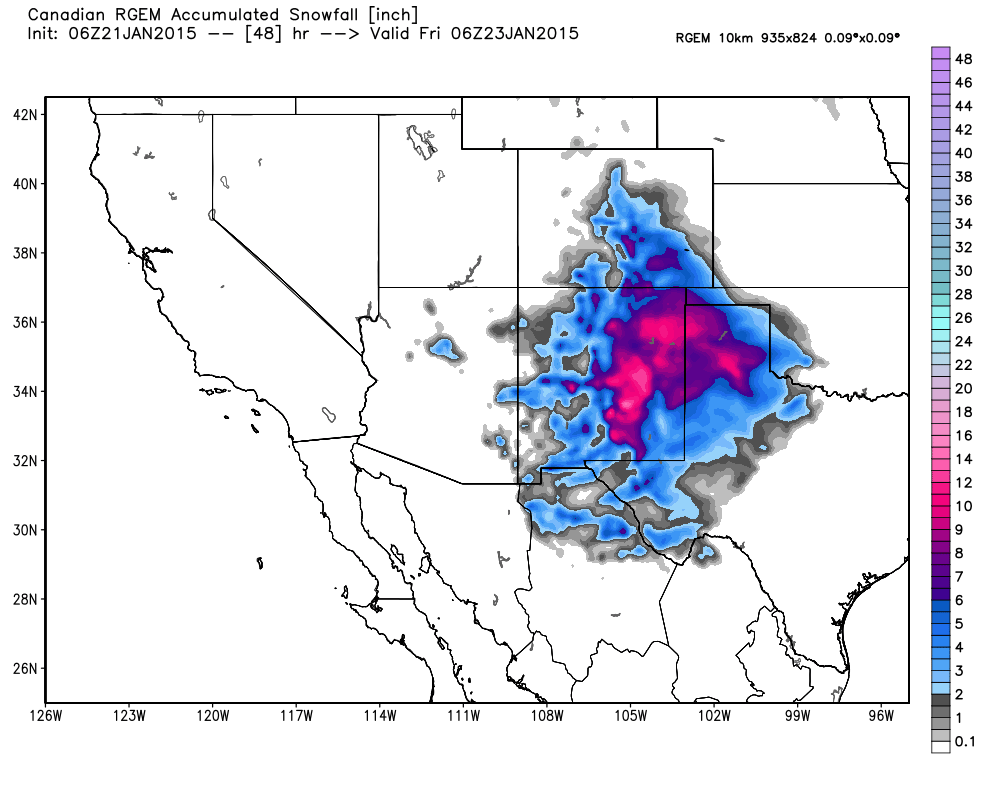 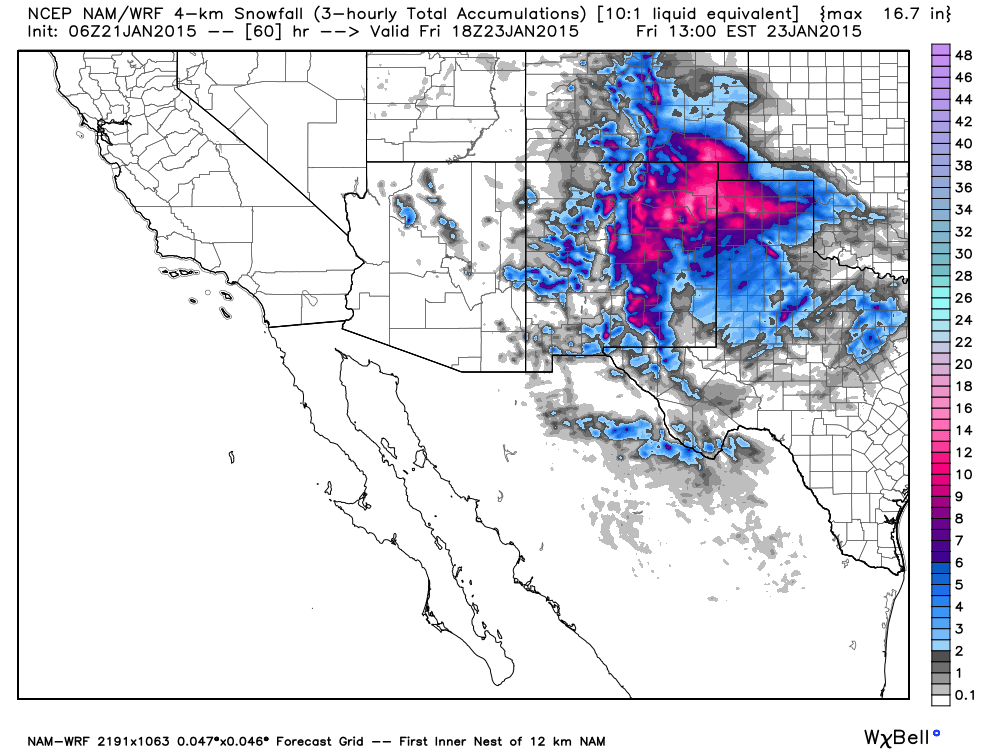 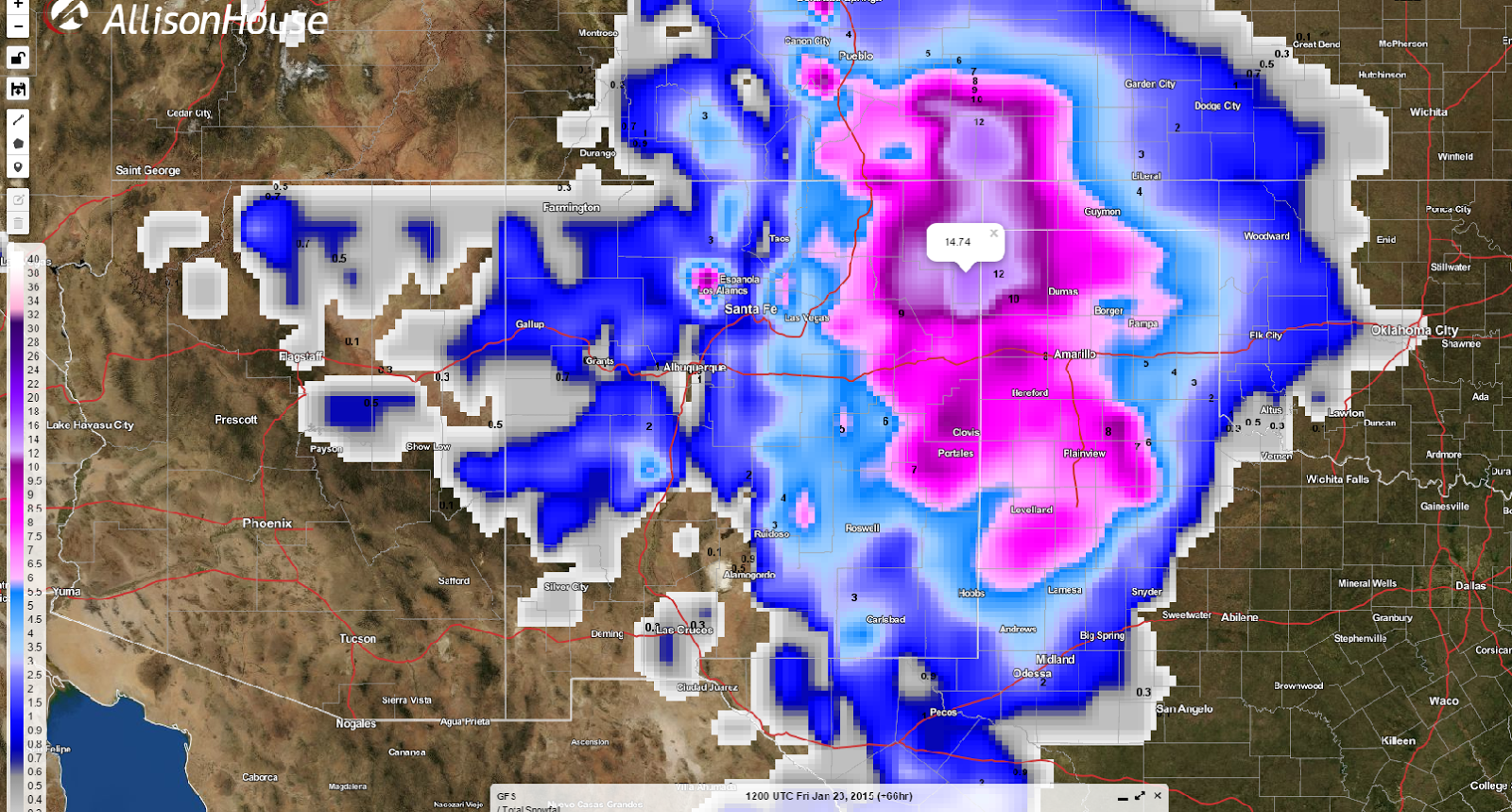 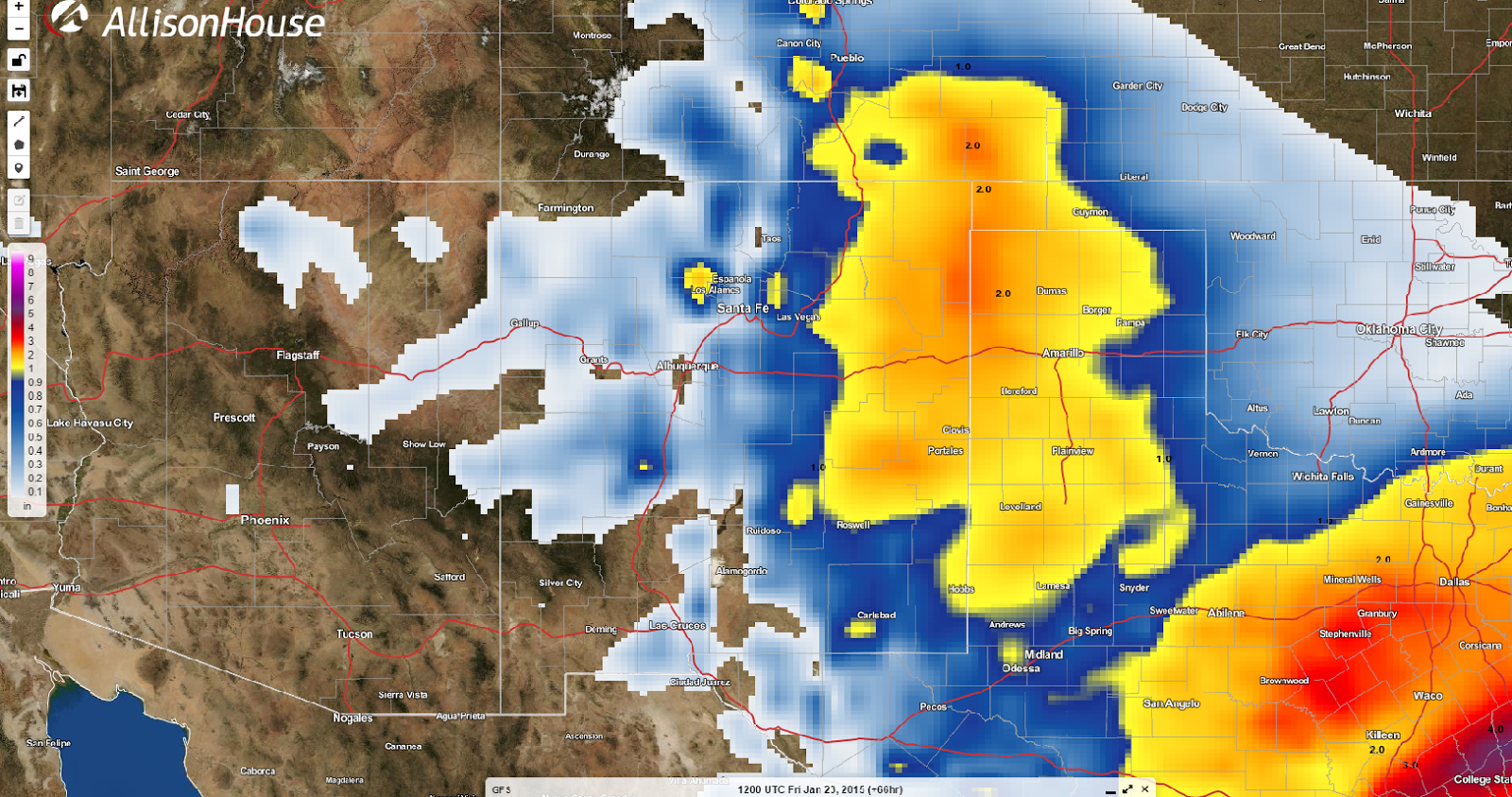 This version of the GFS model seems to be in the middle ground as far as snowfall totals go. It still forecasts the heaviest snows over northeast and eastern New Mexico. It bothers me that it doesn't have very high totals for most of the states mountains. So I think this model is under forecasting the snowfall totals from this storm.

Then We Have This! 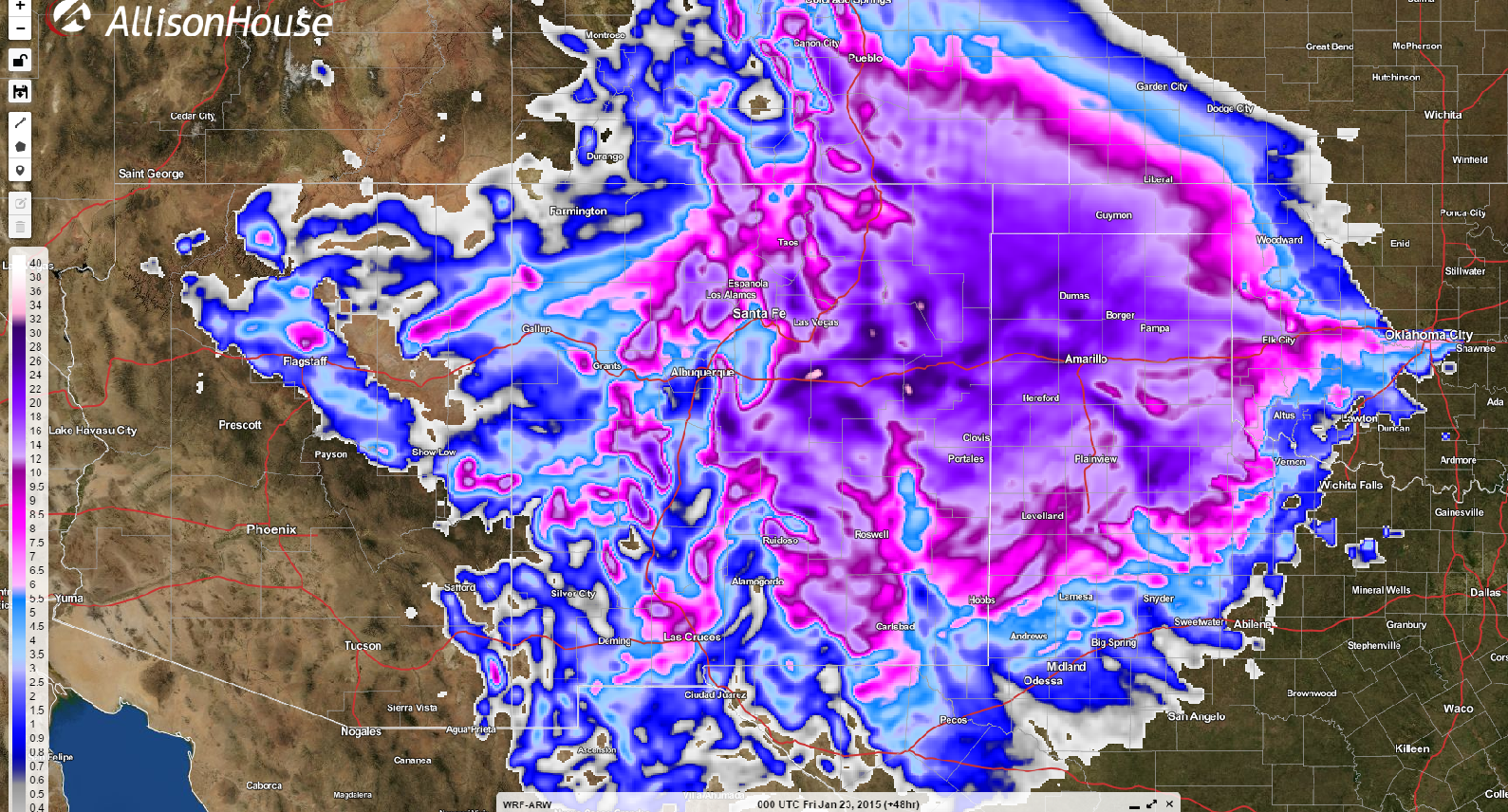 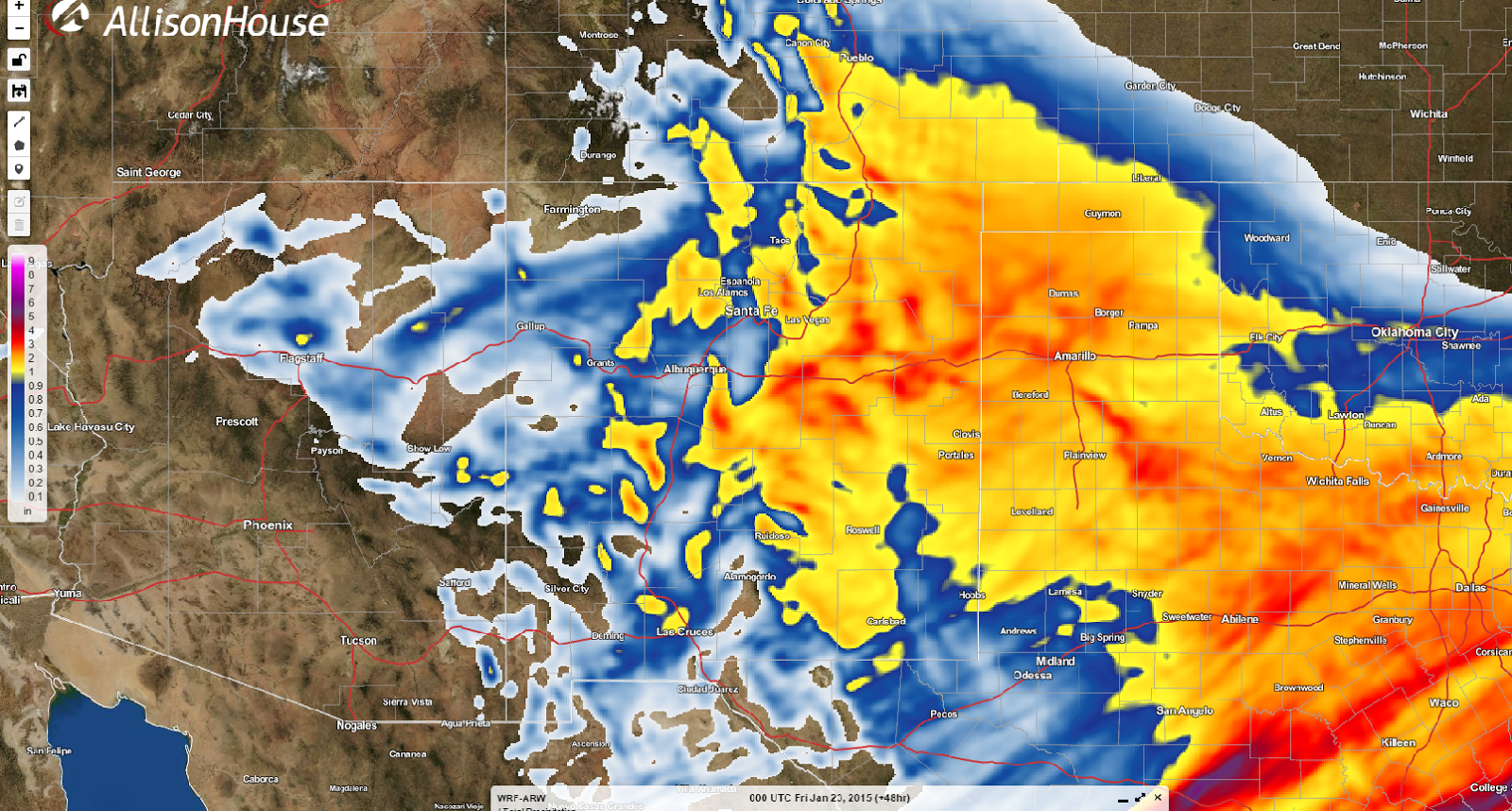 So after taking a look at this model you have to have had the same thought as I did,which was: Are You Kidding Me! Its forecasting a foot of snow up and down the Pecos Valley from Roswell to Carlsbad, 12" - 20" along the east face of the Guadalupe and Sacramento Mountains, around 10" for Hobbs, 12" for Tatum, 12" -18" for the Clovis and Portales areas, and up around the Vaughn and  Clines Corners areas 24" - 32".

The previous run of this model had the 32" bulls eye over extreme northeastern New Mexico. Now its shifted this excessive snowfall bulls eye southwest to the Clines Corners area, and eastward along I-40.

Do I believe this models forecasts? Yes and no. I like its trend of shifting the heaviest snows further south because the models are trending the upper level low further south with each new run. Do I think this much snow will fall? Its possible in some places. But honestly I can't tell you where or if 32" of snow will end up on the ground. Nor can I tell you at this time that this model is going to be dead on or way off. The potential for heavy to very heavy snows is there...just where is the problem.

Three storms back to back December 22-25, 1997 produced snowfall totals comparable to this across the eastern one half of New Mexico.

New Mexico's ranchers suffered tremendously from this storm. Several hundred thousand cattle, sheep, and antelope died from the cold, snow, and exposure. A Dairy in Dexter lost 3,000 calves alone with many more likely having died in the Pecos Valley and not reported. The New Mexico Air National Guard dropped hay and supplies for a week trying to save these animals. Some ranchers didn't get out of their homes for a month because of the high snow drifts. Snow drifts of 3' to 6" were reported across the southeastern plains, 10' in the Guadalupe, Sacramento, and Capitan Mountains. Drifts of 10' - 30' were reported across the eastern plains. Some 3,000 people were stranded in Vaughn and had to be rescued by helicopter and snowmobiles.

Do I think that this current winter storm will be this bad? No I don't think so. But make no mistake its going to be bad! So now is the time to get prepared. 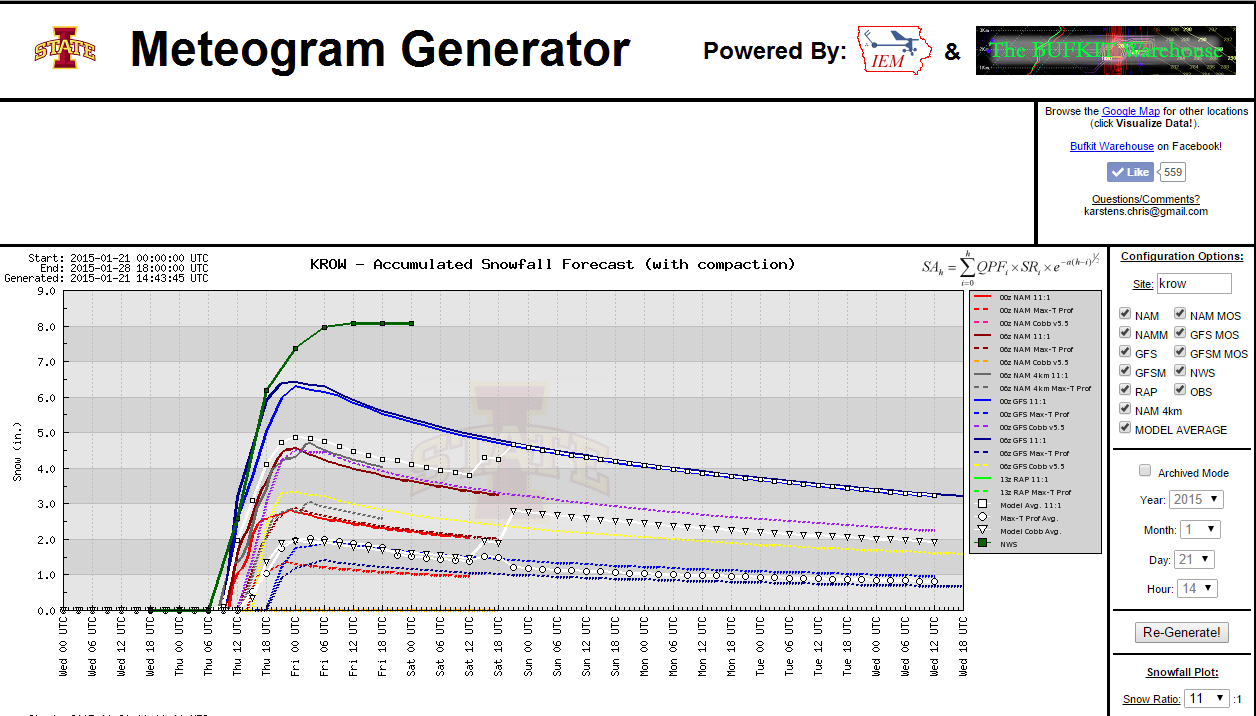 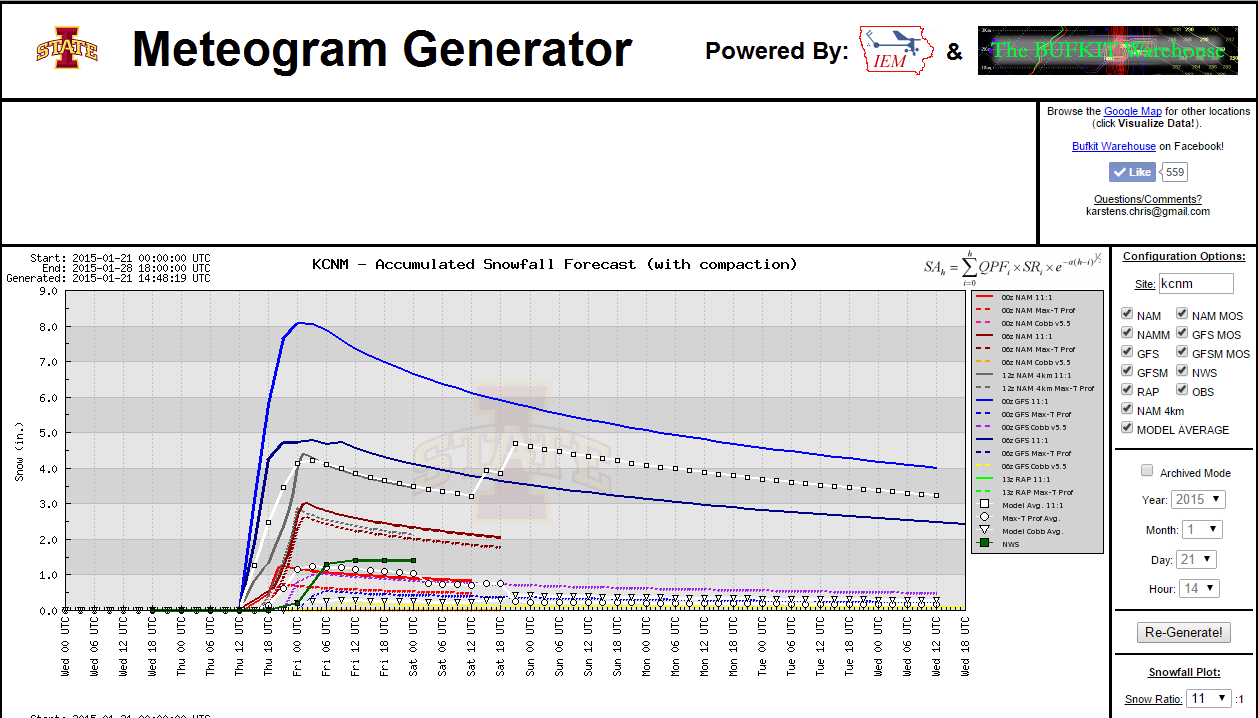 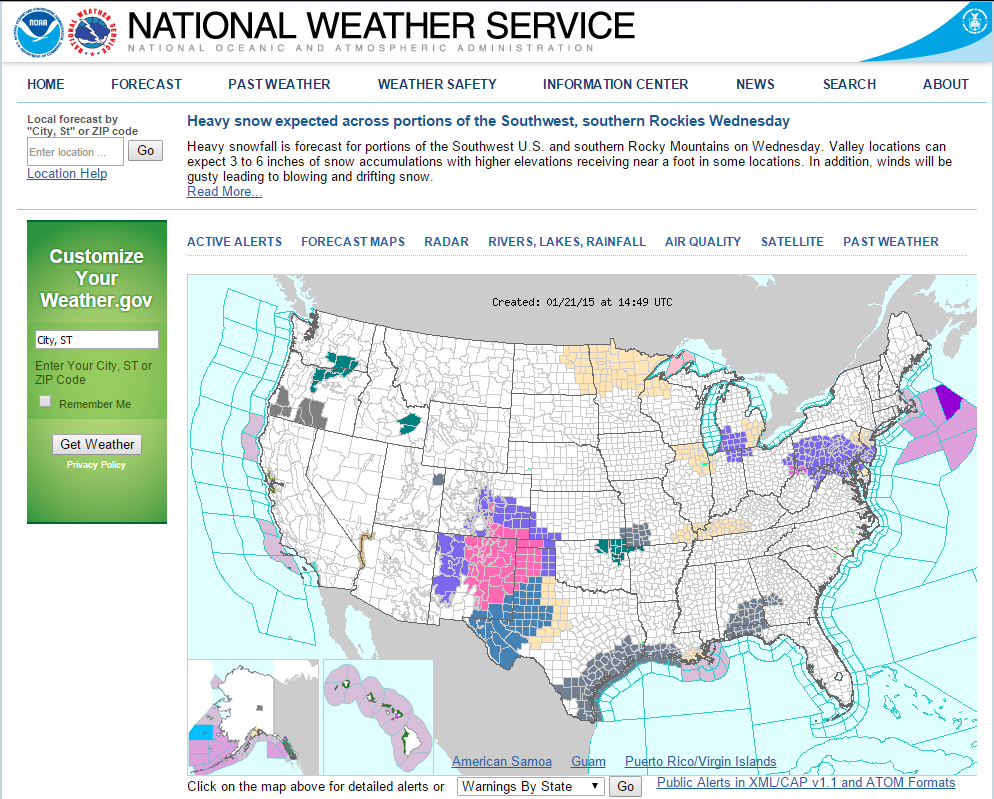 Click On This Link To Open Up The Latest Updated Map.
Then Click On You Area Of Interest To View The Latest
National Weather Service Watches & Warnings That Are In Effect.

Much of New Mexico is currently (as of this writing which was at 8:00 AM MST Wednesday, January 21, 2015) under Winter Weather Advisories, Winter Storm Watches, and Winter Storm Warnings.

Conditions are forecast to deteriorate today into tomorrow across the state. This will be the first widespread significant snowstorm for the state this season. This storm will turn dangerous across many areas of the state today into Friday morning. Strong emphasis is being places across the northern mountains, the northeastern, and eastern plains east of the mountains! Major impacts from this snowstorm are being forecast including significant travel problems with the possibility of many road closures. Life threatening conditions will be possible across these areas tonight into Thursday especially if you are traveling and become stranded by the heavy snowfall, blowing and drifting snow!

Please keep in mind that these forecasts may change as the latest computer model forecasts becomes available today. This is a potentially very dangerous winter storm folks. Its going to be a very bad idea to try and travel anywhere north of Roswell tonight into Friday morning. Especially across the northeastern, eastern, and east-central plains of the state. Travel will become difficult to dangerous across the Guadalupe, Sacramento, and Capitan mountains,  as well as the southeastern plains tonight into Friday! I do expect to see road closures across the local area. Now is the time to prepare. Please check my web page often, or the National Weather Service Links above for the very latest updates.

The Truth Is Stranger Than Fiction!
on January 21, 2015
Posted by Wendell Malone 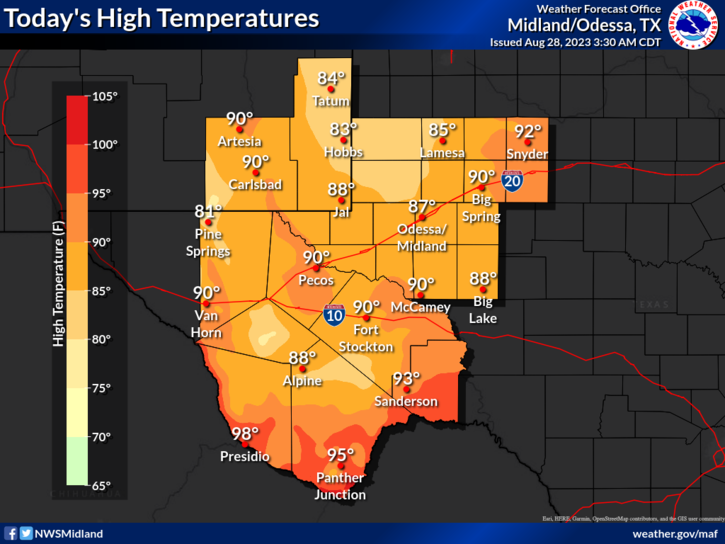