Our Searing Summer Heat & Drought May Be Coming To An End. 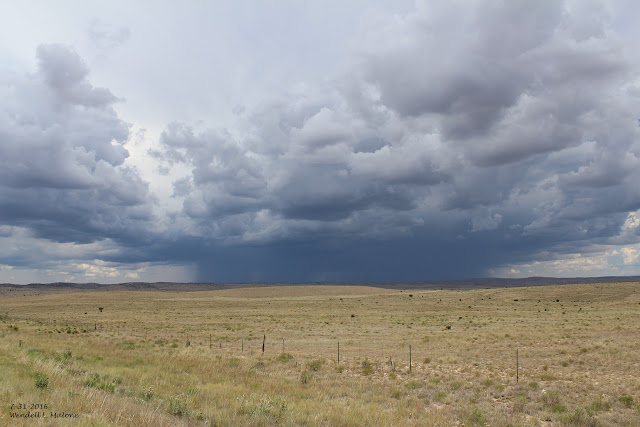 The scene above is one that we certainly could use more of here in much of southeastern New Mexico and West Texas...and we will, soon. 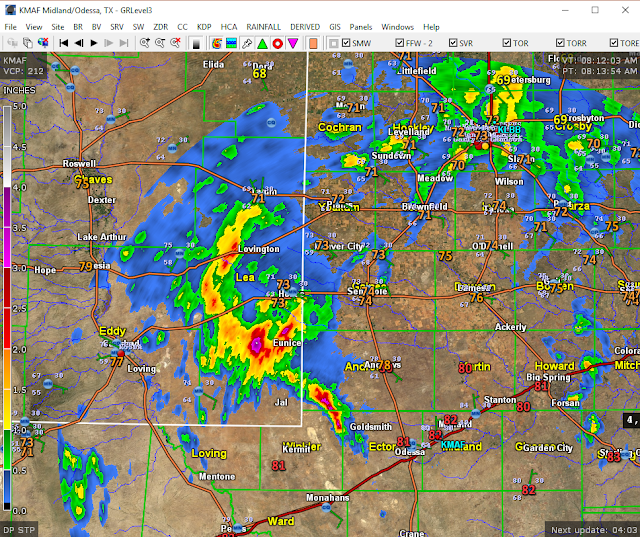 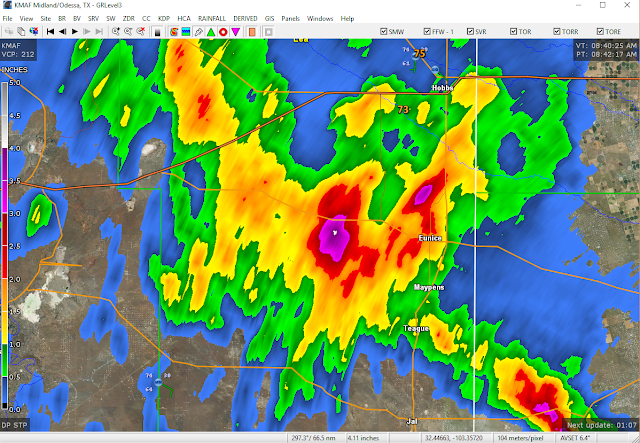 Radar estimates indicate that around 4" of rain may have fallen from last night's thunderstorms 10 miles west of Eunice in Lea County. Nothing like going from drought to flood...happens all the time in The Land of Enchantment. Although the highest 24-hour rainfall total reported in Lea County was .52" at the CoCoRaHS Station located 2.4 miles east-southeast of Hobbs.

Did It Rain At Your House? Want To Tell The World How Much? Join the Nationwide Volunteer Rainfall Reporting Network (CoCoRaHS) Today - For Free. Enter Your Totals Online Once A Day. Click On This Link To Sign Up. 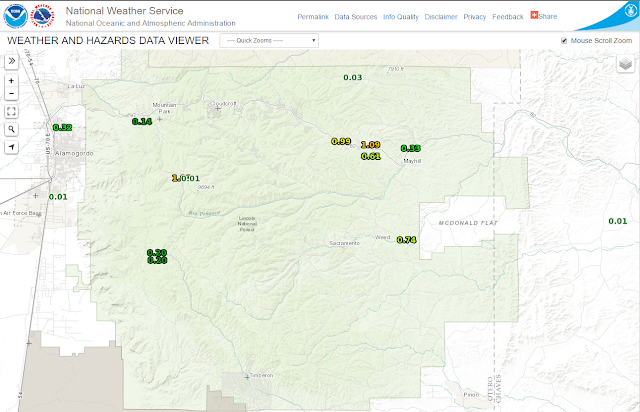 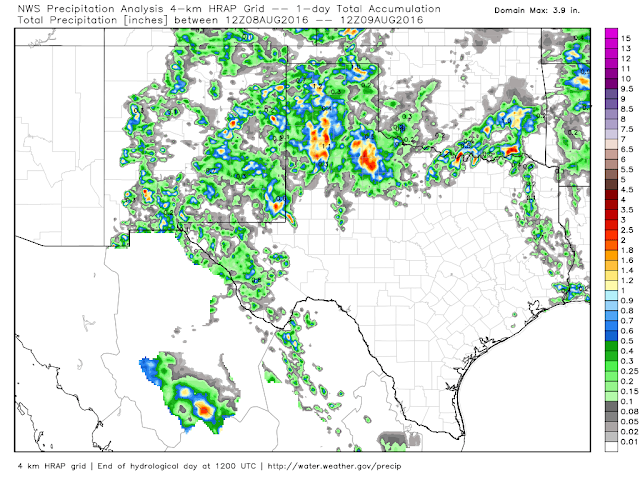 Estimated 24-Hour Rainfall Totals.
(As Of 6 AM MDT This Morning.) 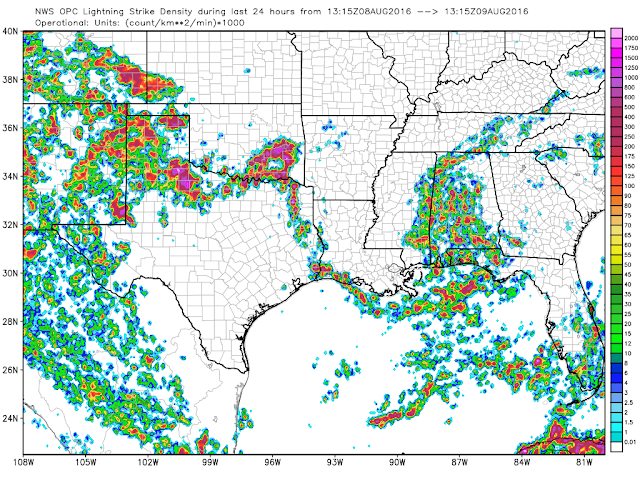 Tired Of The Summer Heat & Drought - Changes Are Coming. 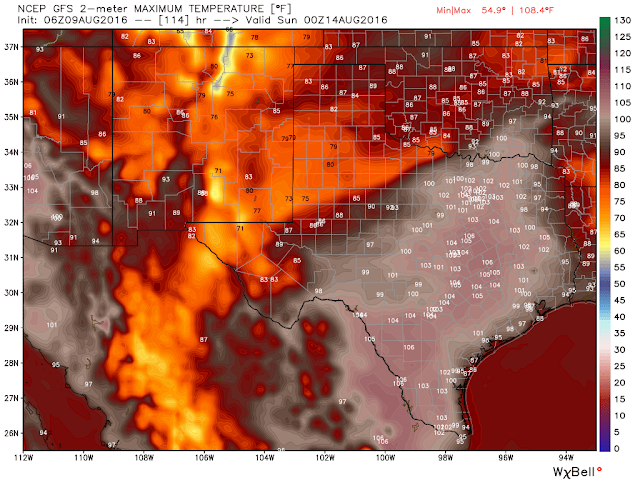 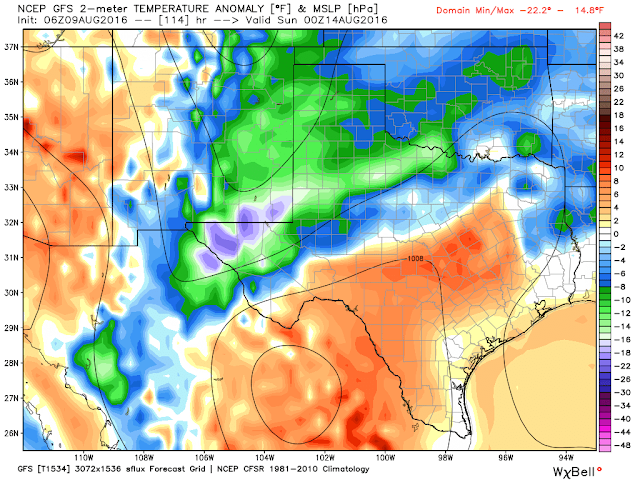 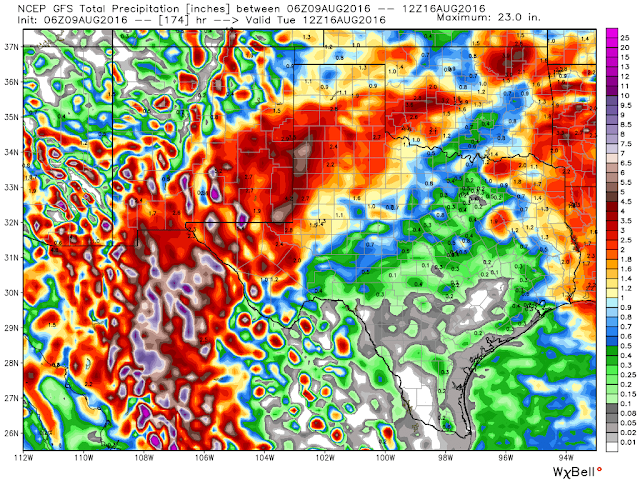 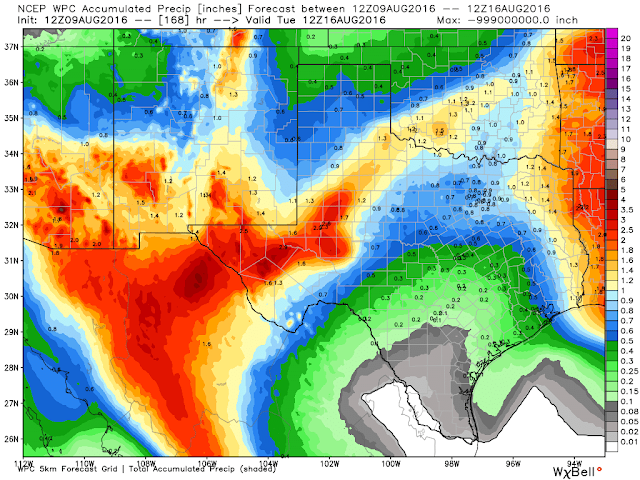 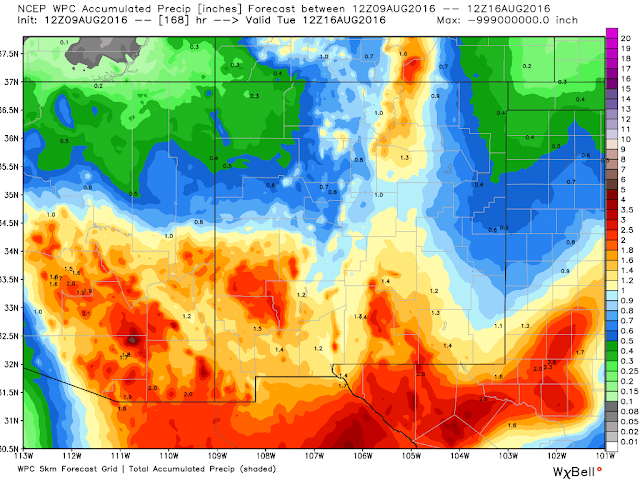 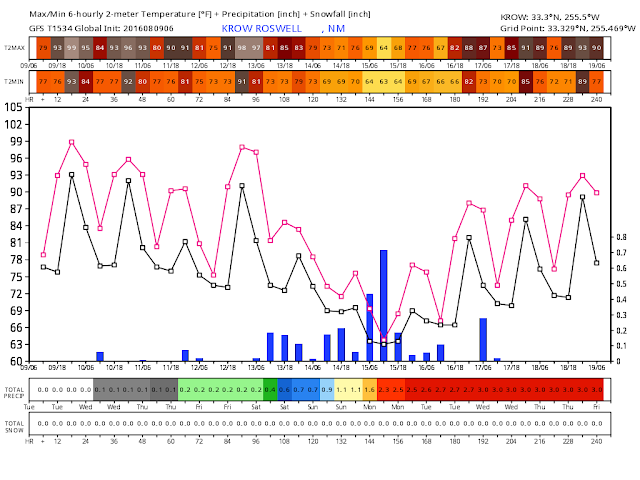 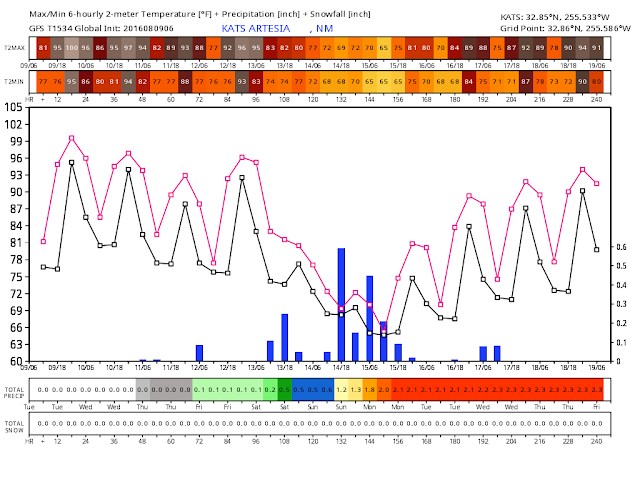 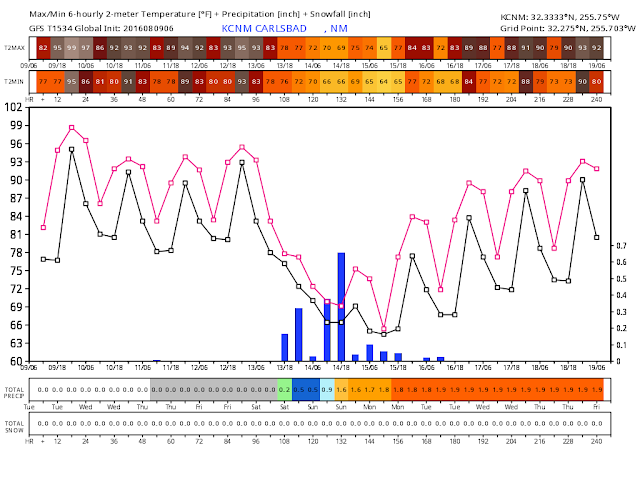 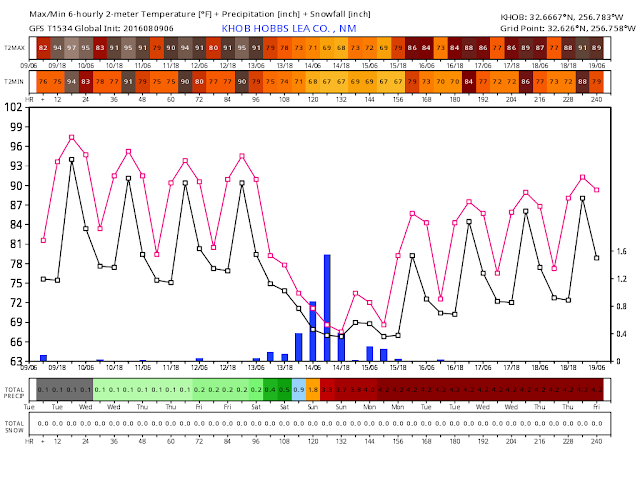 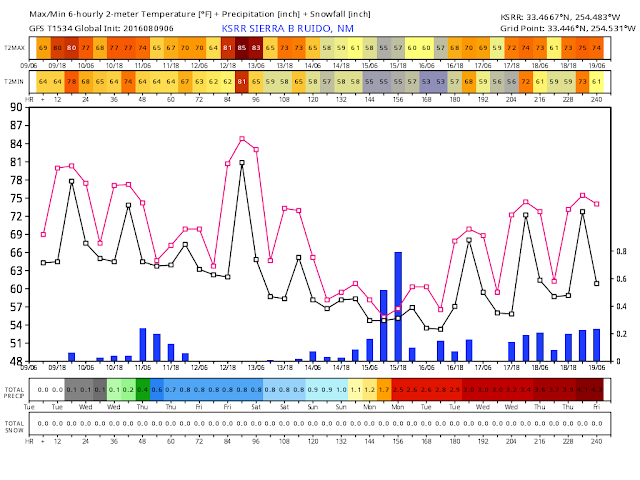 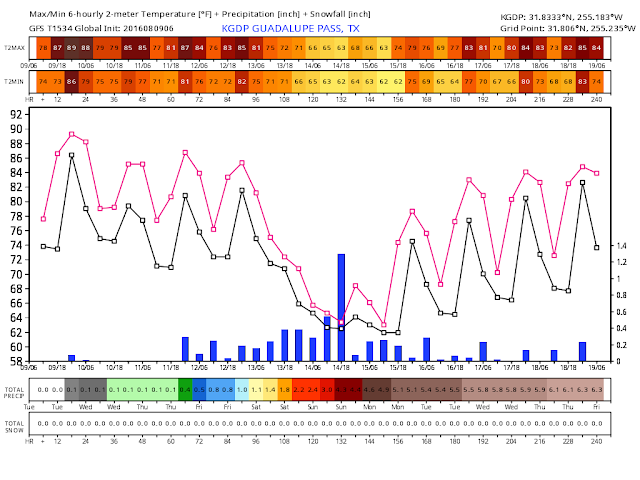 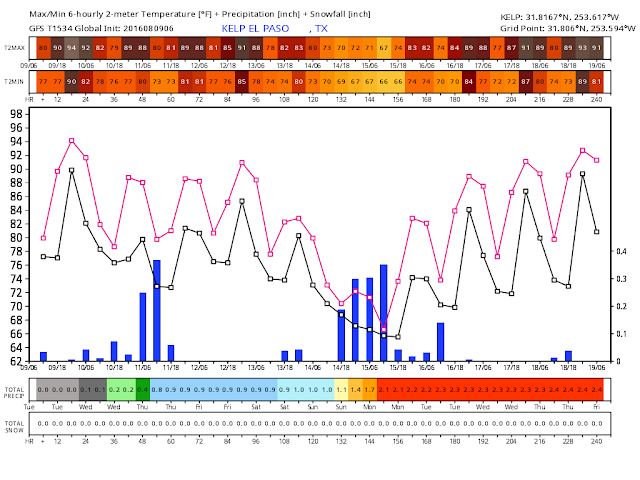 Without a doubt it has been one long hot and dry summer. My rain gauge still stands at 2.90" for the year which is some 6" below the 30-year normal for Carlsbad. This is fairly representative for much of the local area. My highest temperature recorded here at the house still stands at 111ºF.

Major changes to our local weather appear in the making. Thunderstorm activity will be on the increase this week especially as we head into the upcoming weekend. By the end of the week an inverted trough of low pressure at the mid levels of the atmosphere will be moving northward out of Mexico and into New Mexico. This combined with the remnant moisture associated with Tropical Depression Javier now located along the very south tip of Baja, Mexico, and a good fetch of low level moisture from the Gulf of Mexico...will all combine to produce heavy rains over much of the area late this week into the first of next week.

Add to this rich mix of atmospheric moisture as slow moving cold front moving southward down the eastern plains of New Mexico and boom...the potential for heavy rains will exist. Flash flooding may become a concern this week into early next week.

Note that the GFS model gets a little crazy with storm total rainfall amounts over the Sacrament and Guadalupe Mountains by next Tuesday. 8" to 10" and 4" to 6" over parts of Lea County. Its way too early to know if this will pan out. This is not an unreasonable forecast given the setup but trying to nail down just exactly how much rain falls and where is extremely difficult, especially this far out in time. So use a grain of salt with these forecasts. Much better forecasts will be available later this week and weekend.

Forecast models indicate that our high temperatures on Saturday behind the southward moving cold front may only be in the 70's. Now that will be a welcome relief from the 100-degree temperatures that have dominated this summer.

The Truth Is Stranger Than Fiction!
on August 09, 2016
Posted by Wendell Malone