Indian Summer Weather This Week - Next Storm A Windy One. 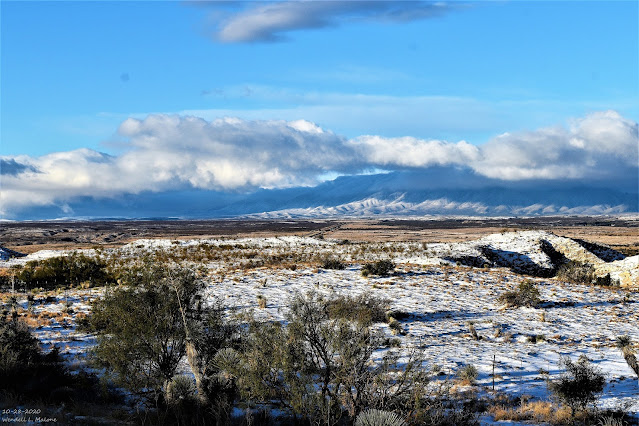 Last week's epic and historical early winter snowstorm is but a memory now for most of us. Among other things, it gave us our first freeze of the season about a week early. Now Indian summer has kicked in and will be very noticeable this upcoming week. Take a look at our forecast highs temps this week via the graphs above.
Next Winter-Like Storm In About A Week To 10-Days.
Canidian (GEM) 300 Millibar (30,000') Wind Forecast. 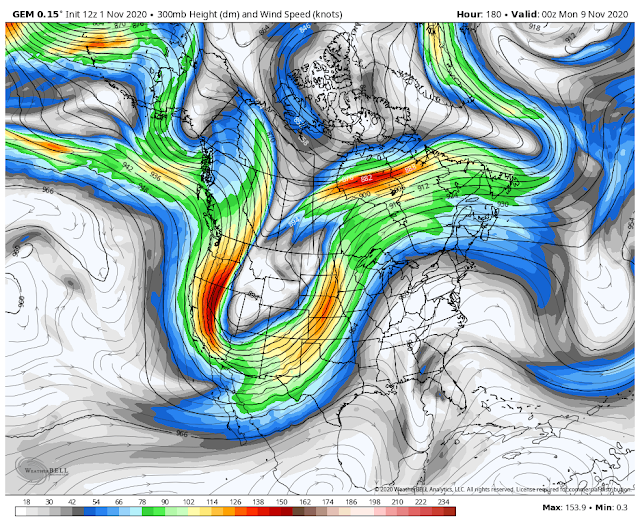 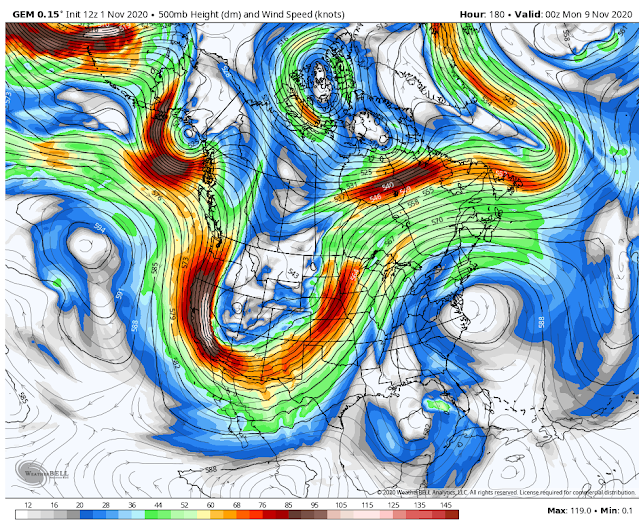 Our next digging mid-upper level trough of low pressure is forecast by the models to dig into the Great Basin by late next weekend (Sunday the 8th). A potent jet stream wind speed max of around 180 mph at 30,000' is forecast by this morning's 5 AM MDT run of the Candian model to be digging into west Nevada and eastern Nevada by next Sunday. At around 18,000' it forecasts winds of around 135 mph. Those are some potent wind speeds for early in the season and in fact for any time of the winter. Although this next storm won't start affecting us for another week the models are already indicating it to be a strong storm. If this trend continues in the models we may be looking at a high wind event locally. More on this later.
Canadian (GEM) Snowfall Forecast. 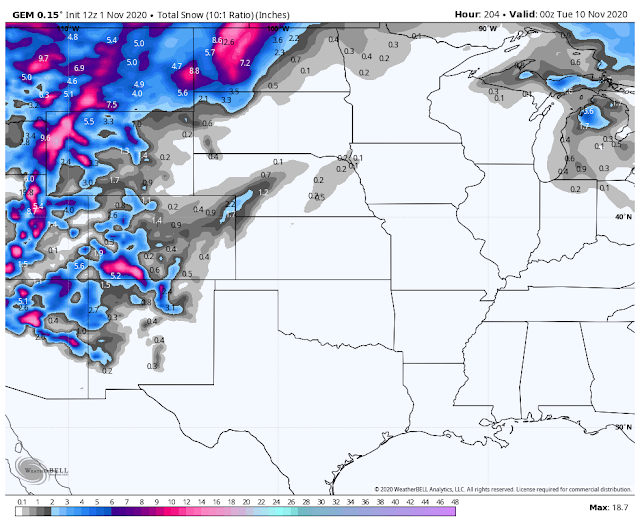 Valid At 5 PM MST Monday, Nov 9, 2020.
Mountain snows are possible with this storm late next weekend into the first of the following week. Ski lovers are going to love this winter if this trend continues. I have my doubts about a dry and warmer than normal La Niña winter by the way. To-date (since September) we've already had two separate record-breaking winter-like storms that produced record cold across New Mexico with record cold and snows with the second storm this past week.
Is A Pattern Developing?
My High/Low-Temperature Graph.
(2.1 NNW Downtown Carlsbad, New Mexico). 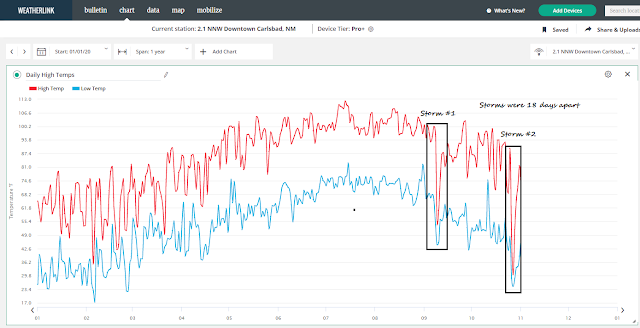 Our record cold storm on September 9th and the one on Oct 27th occurred 18-days apart. If the long-range model trends are correct the next significant winter storm could impact New Mexico around the 15th of the month...give or take a few days of course.
Climate Prediction Center Long-Range Temperature Forecasts. 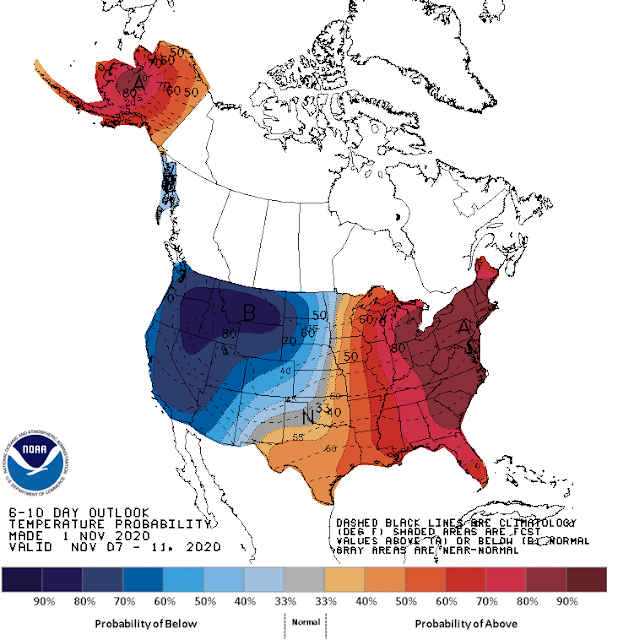 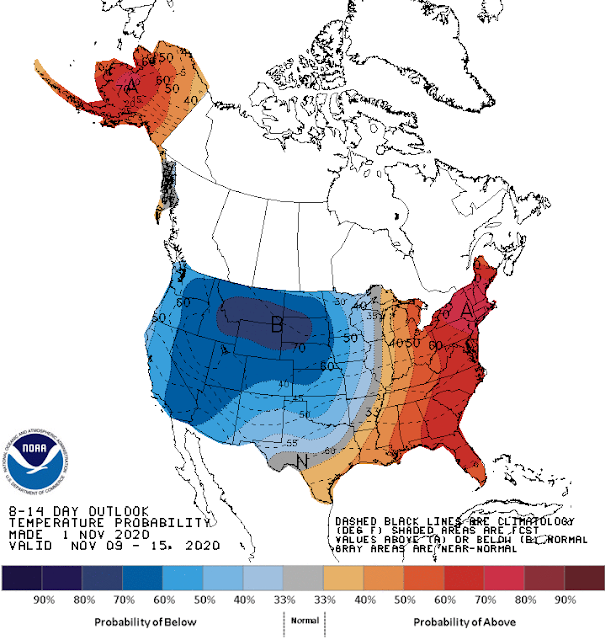 Looking at the 6-10 Day and the 8-14 Day long-range temperature forecasts above the trend or pattern certainly looks promising.
Local November Climatology.
Southeast Plains Of NM. 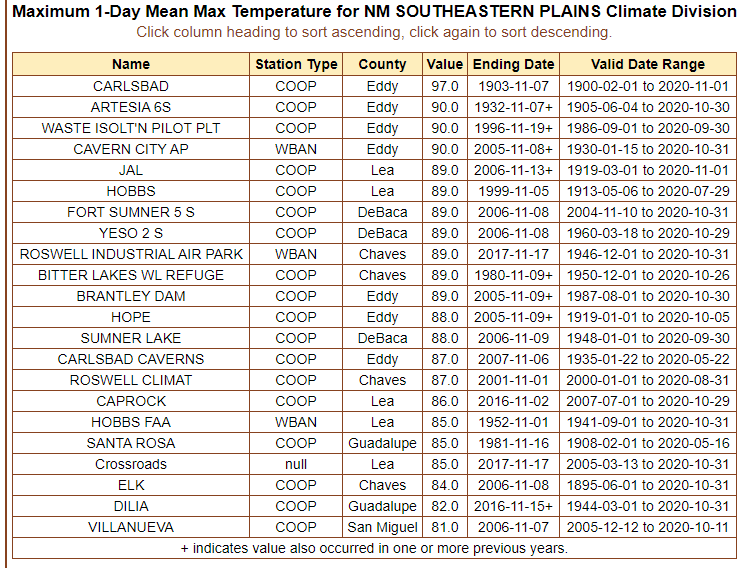 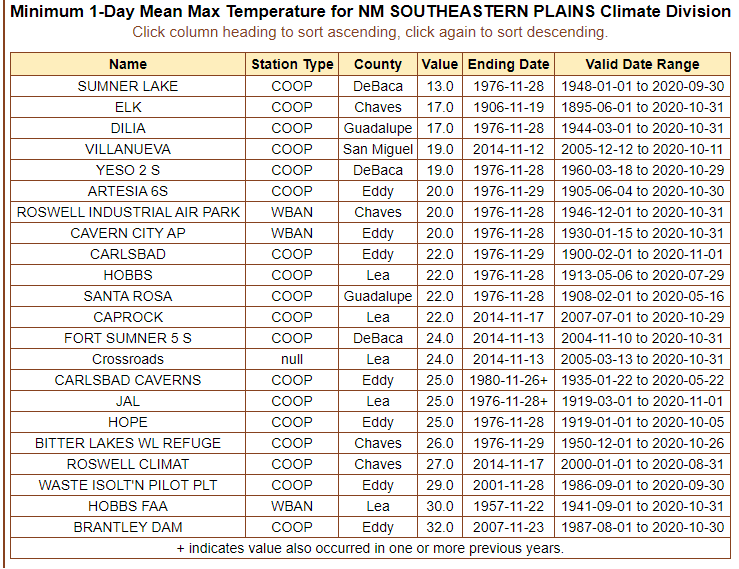 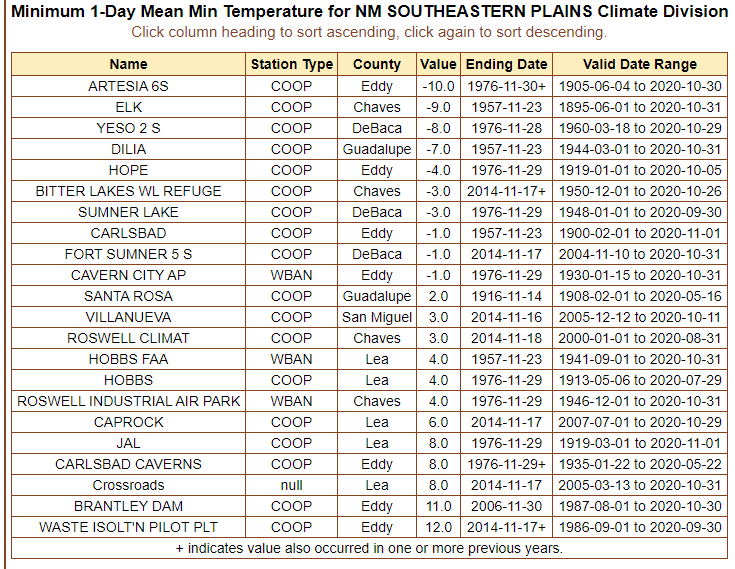 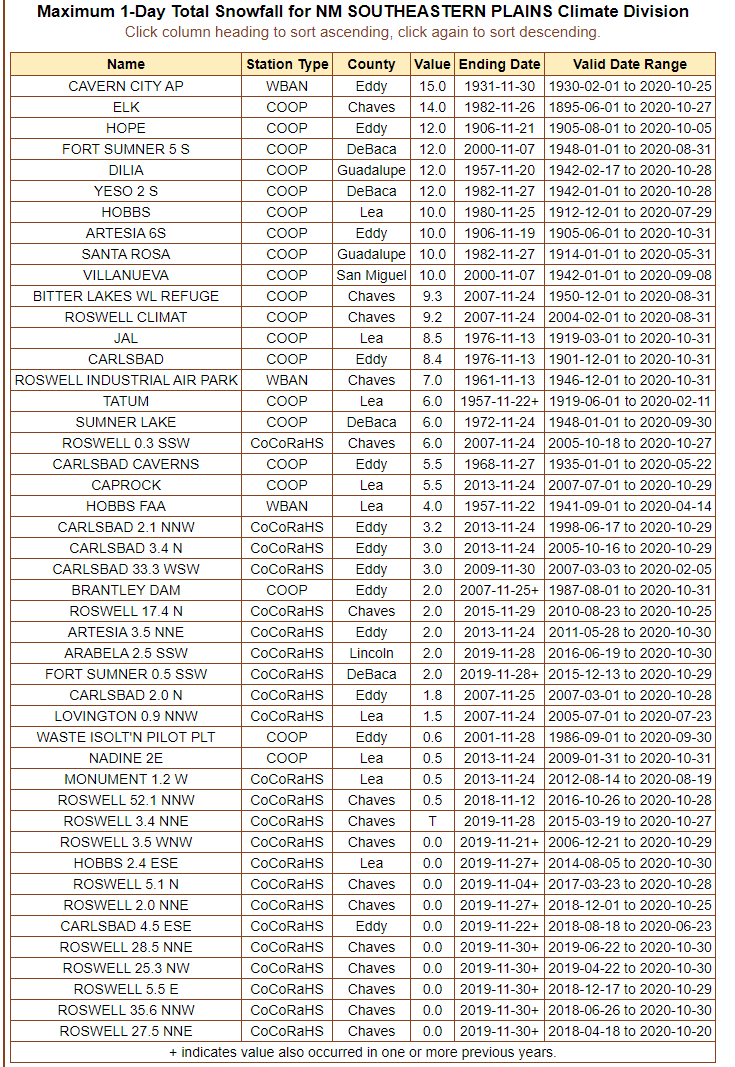 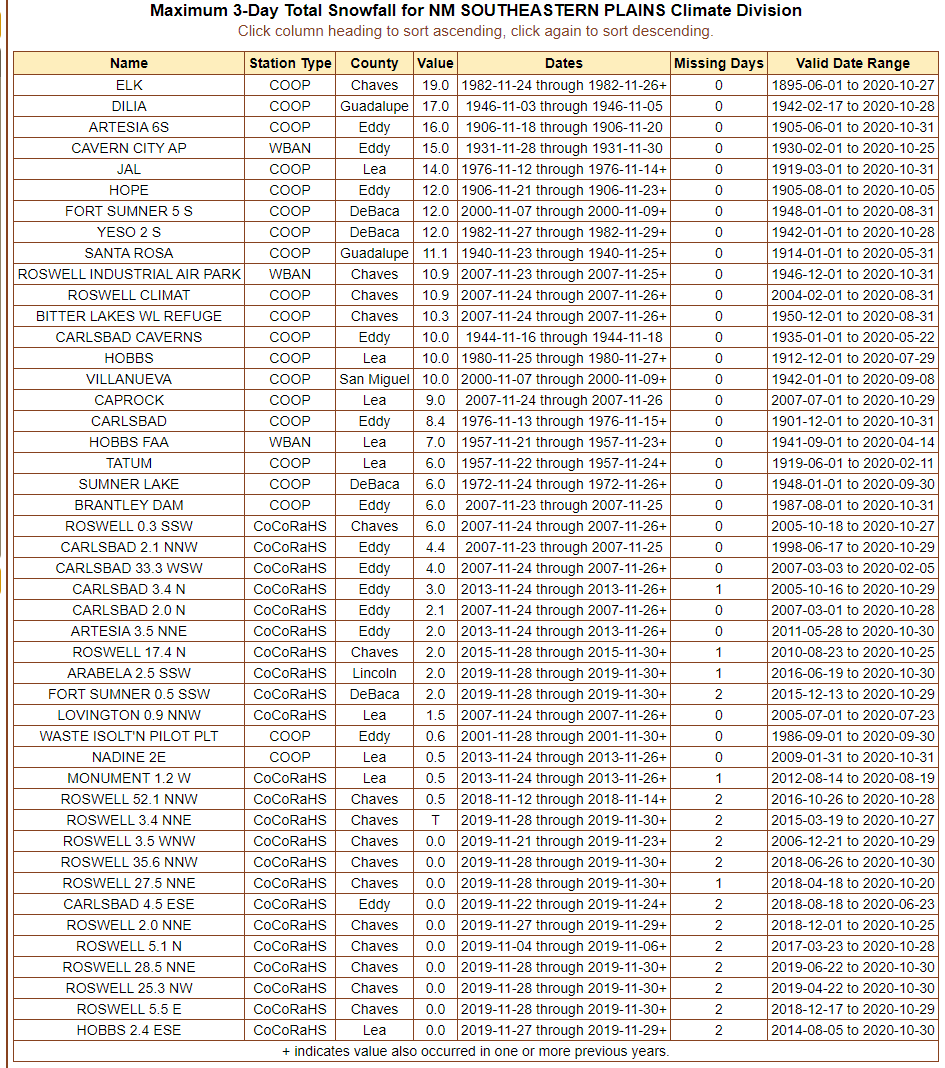 Central Highlands And Mountains Of NM. 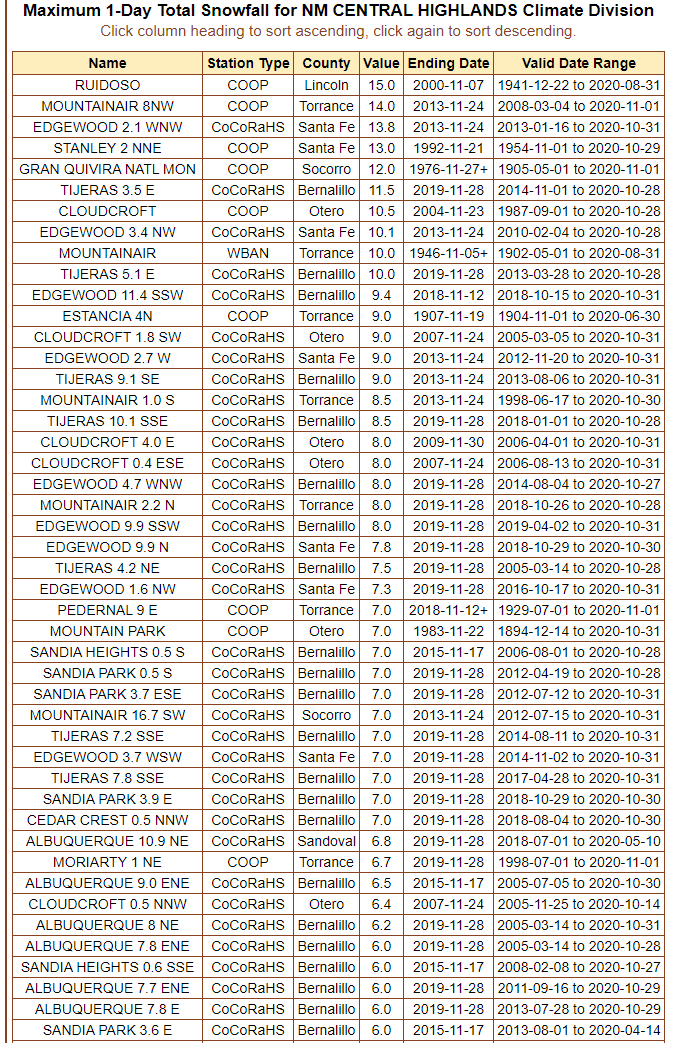 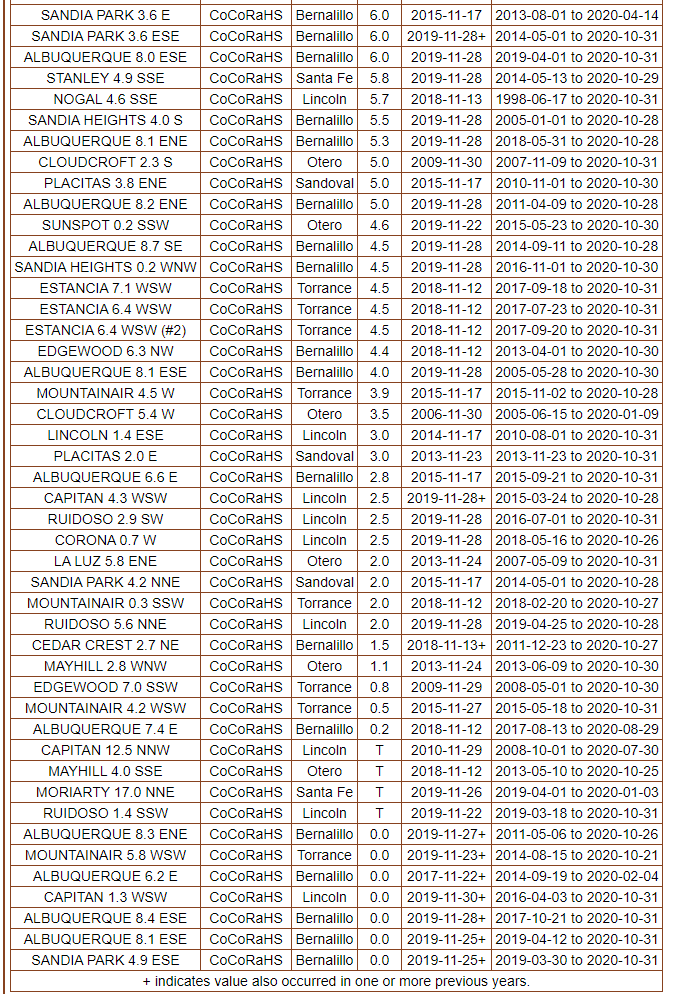 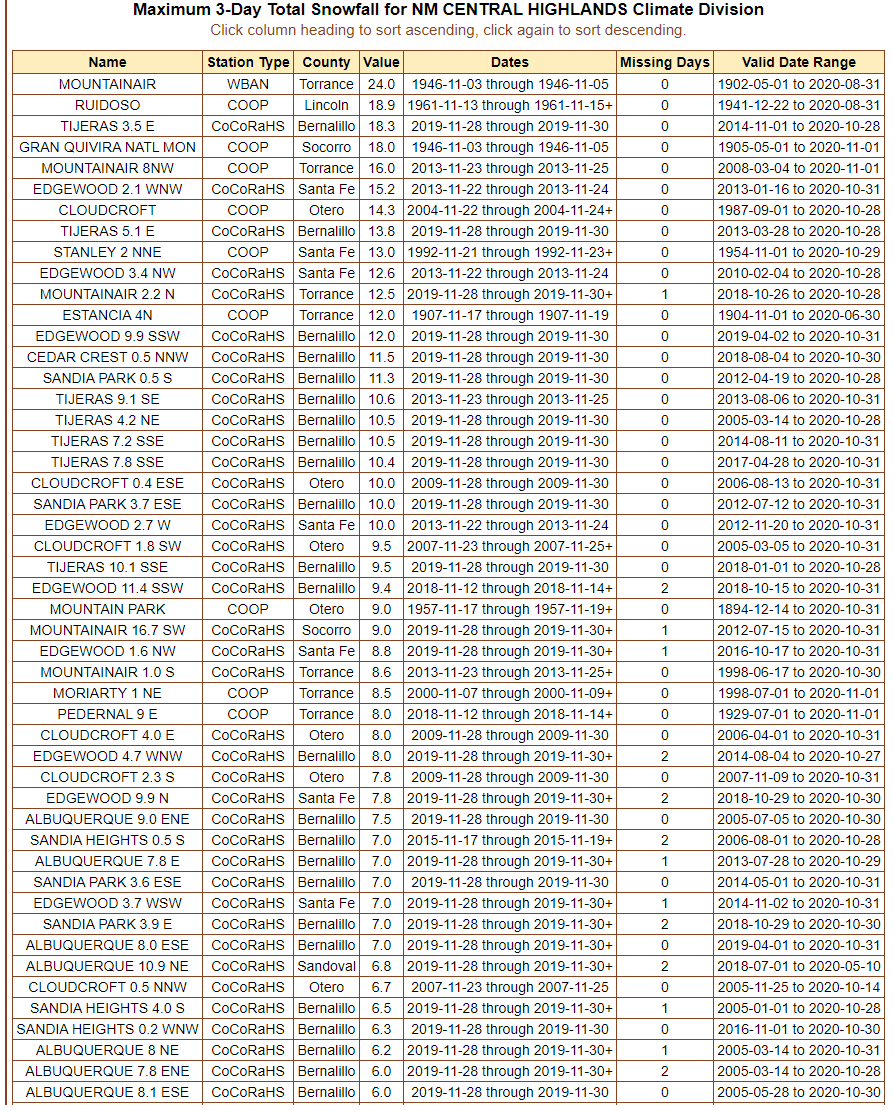 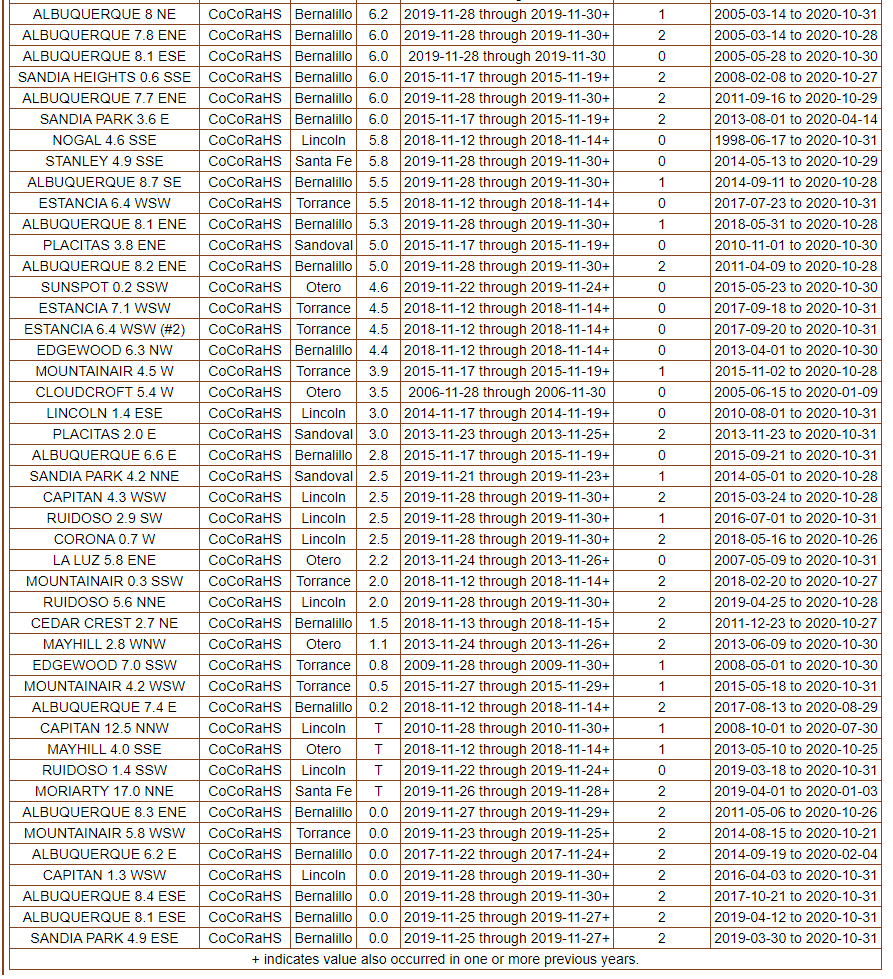 November can and often is a wild month for us weather-wise. It can be extremely warm, dry, windy, and dusty. It can also be extremely cold and snowy. Across the Southeastern Plains, high temperatures have ranged from 97º in Carlsbad on November 7th, 1903 to -10º in Artesia on November 30th, 1976.
November 30th - December 2nd Snowstorm. 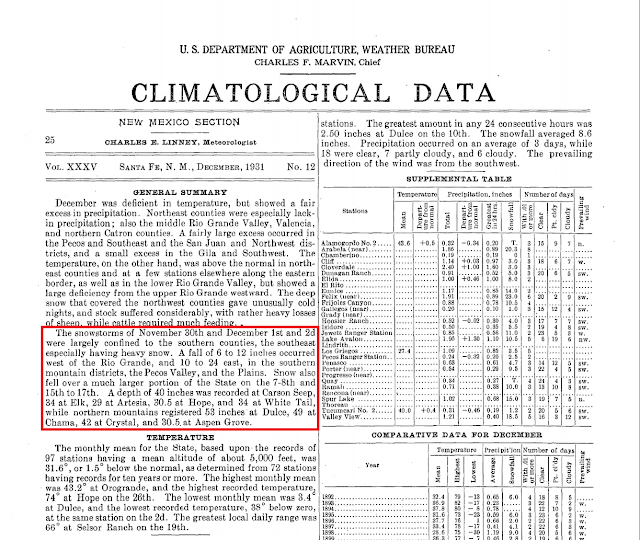 Beginning November 30th and ending December 2nd an incredible snowstorm dumped on Southeastern New Mexico. The Carlsbad Airport recorded an incredible 25.1" of snowfall with a max depth reported on the ground of 18" on December 2nd. The Carson Seep Climate Co-Op Station south of Queen recorded 40" of snowfall during December. 27" of snow fell on December 2nd during that storm. 34" fell in Elk, 34" and also at White Tail southeast of Ruidoso, and 30.5" fell in Hope, 29" fell during December 1931 in Artesia.
The Truth Is Stranger Than Fiction!
Email Post