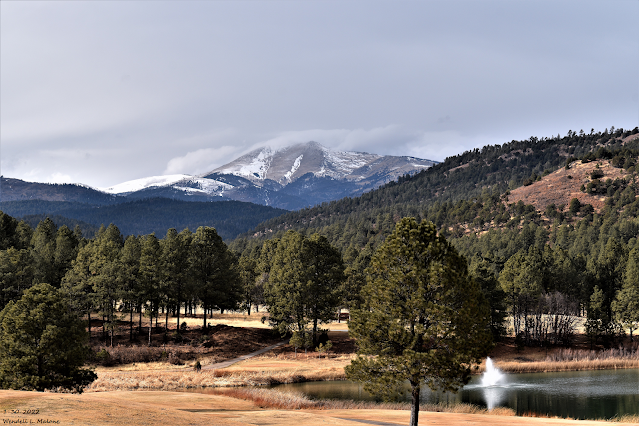 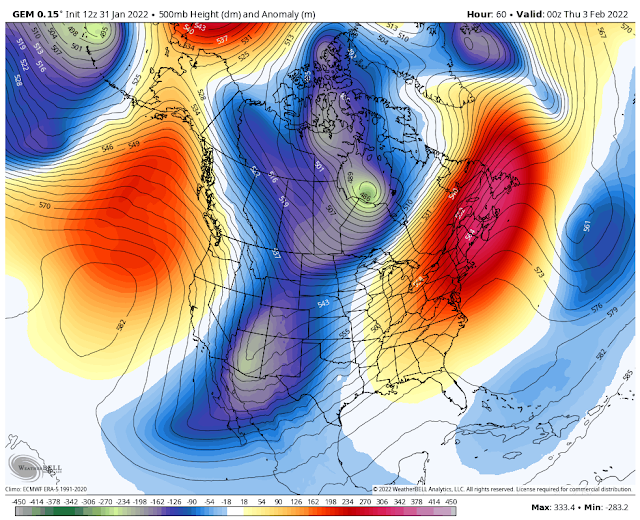 Valid At 5 PM MST Wednesday.
As has been the case for the past couple of days the computer forecast models are still struggling in trying to resolve the track, speed, and location of the 500 millibar winter storm set to impact a large swath of the region Tuesday into Saturday. Several models like the Candian above continue to hint at a closed low forming over the area Wednesday into Thursday. This would prolong the snowfall with more widespread heavier amounts. But overall there remain a lot of differences yet to be resolved which will have an impact on our local forecasts...possibly significant. So be prepared to see changes in our local forecasts.
Surface Map Forecast. 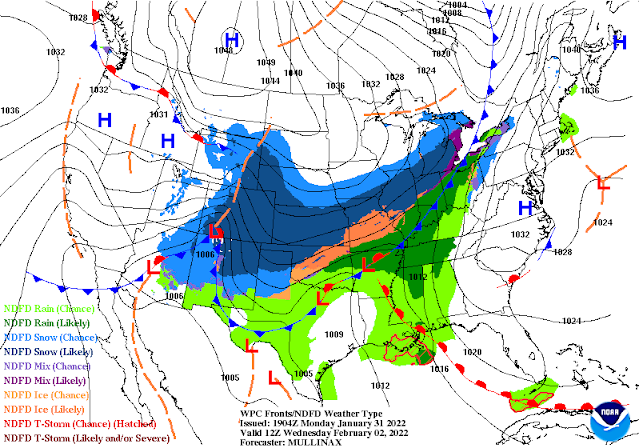 Valid At 5 AM MST Wednesday.
A bitterly cold Siberian airmass is slated to slide into most of New Mexico beginning Tuesday across the northeastern plains of New Mexico and the nearby Texas Panhandle. Just how far south and west and how soon it arrives is still somewhat up in the air. Some of the models bring it southward and westward much faster than what is currently forecast. This is important because many areas of the state and nearby locations will plunge below freezing and stay there until Saturday once the colder airmass arrives.
NWS NDFD Forecast High Temps.
Tuesday. 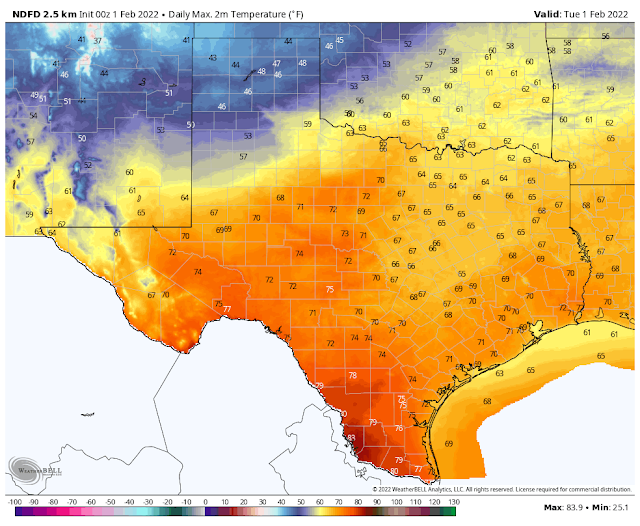 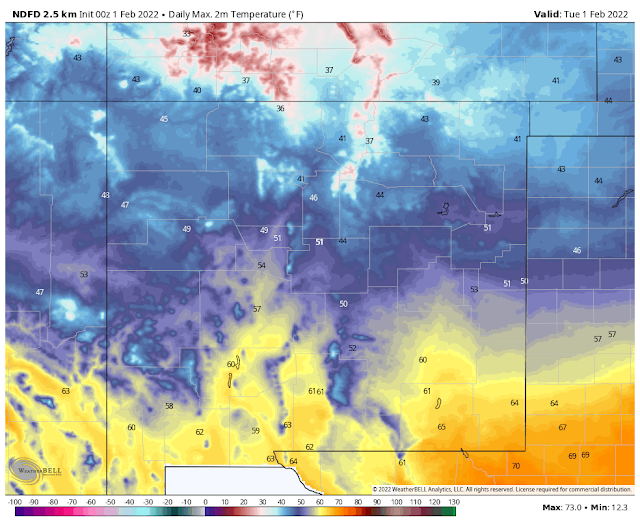 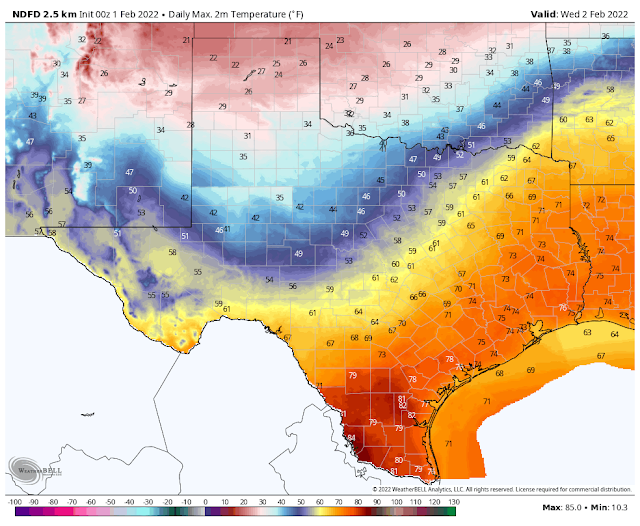 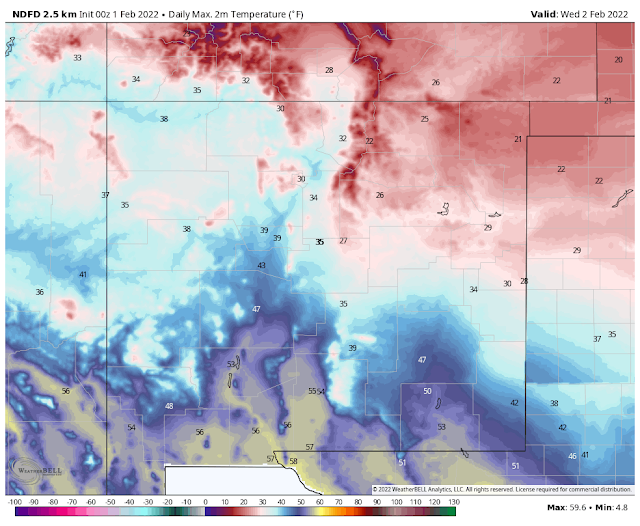 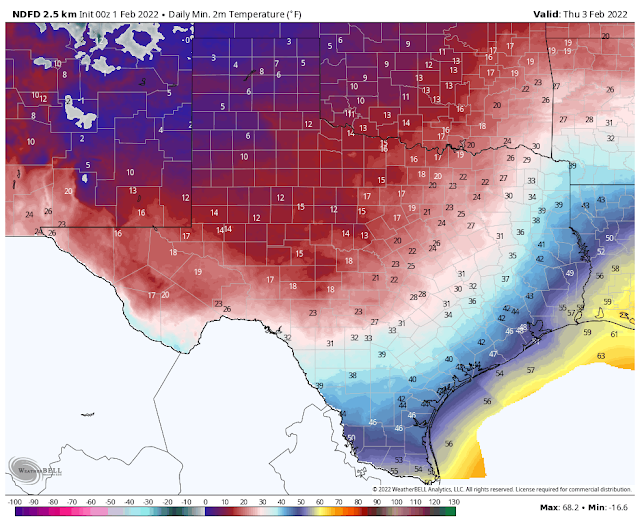 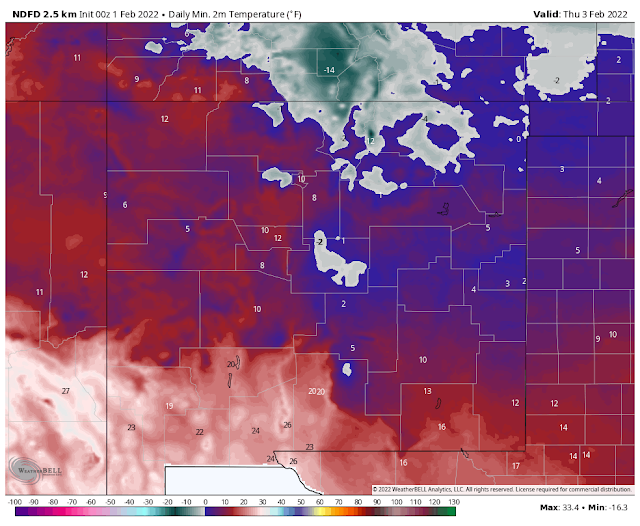 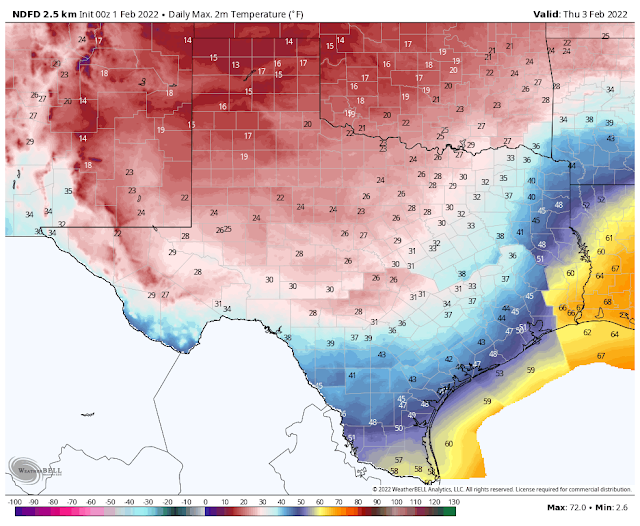 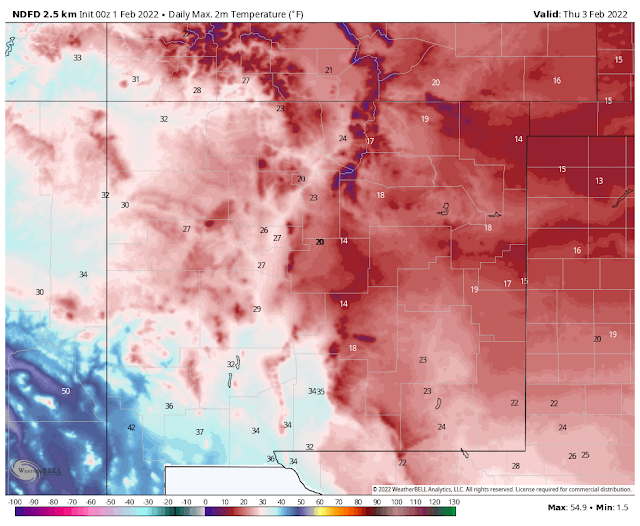 Once we drop down below freezing (areawide) it now appears that we won't climb back up above freezing until Saturday afternoon. The forecast high and low temperatures graphic maps above may even be a little on the warm side in some locations. If the snowfall is heavier and more widespread than current thinking indicates, then many locations in New Mexico and nearby West Texas could easily see low temperatures Thursday and Friday mornings below zero.
Dangerous Life-Threatening Wind Chill Temperatures!
Wind Chill Forecasts.
Thursday Morning. 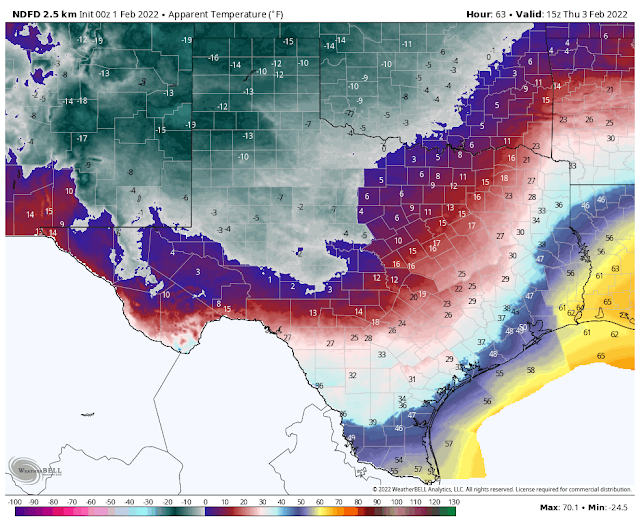 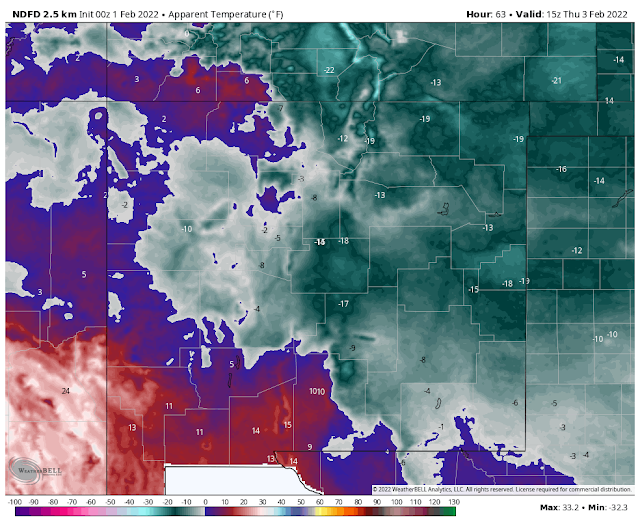 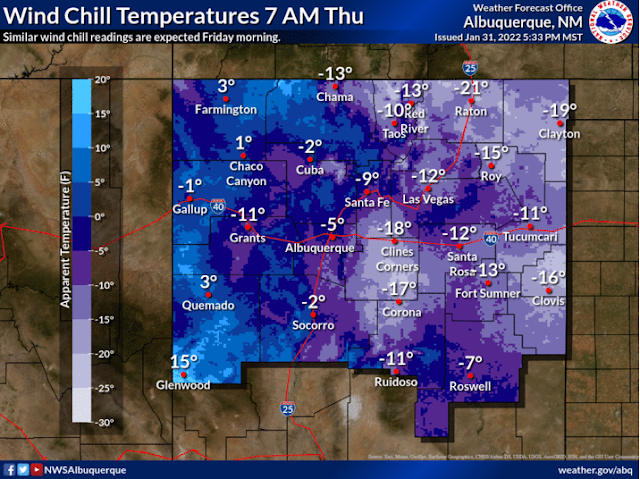 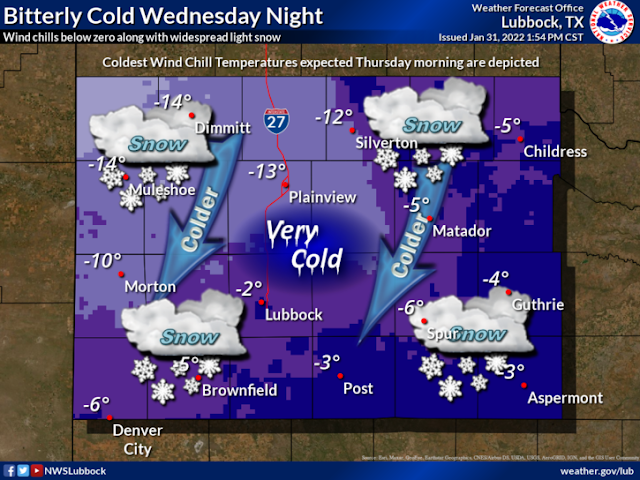 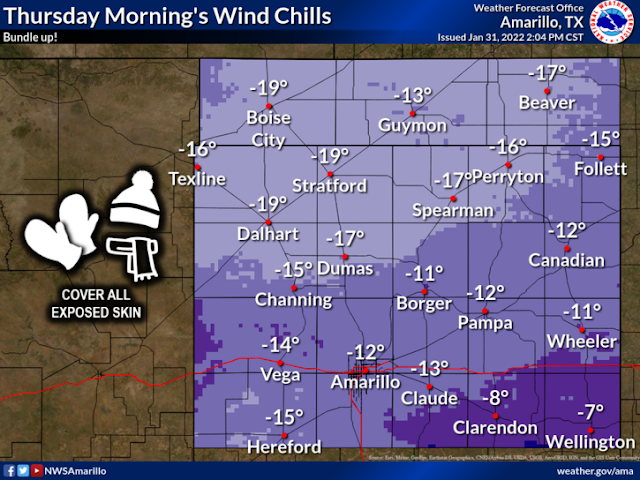 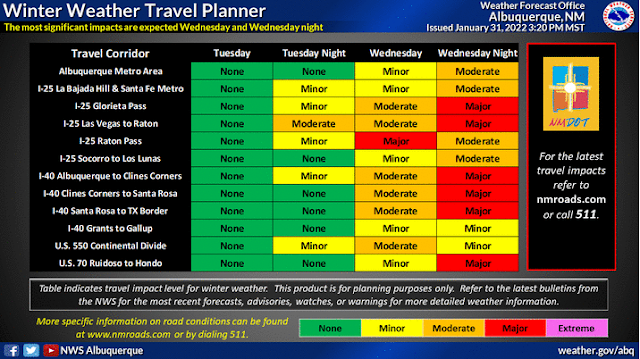 Current forecasts call for temperatures to bottom out in the teens to near 20-degrees Thursday morning. Combine this with northeasterly to easterly winds gusting up 25-35 mph behind the arctic cold front late Wednesday night into Thursday morning, and widespread wind chill readings of -5ºF to -20ºF will occur across most of New Mexico and West Texas.
Life-threatening conditions will occur when combined with the snow, heavy snow, blowing and drifting snow, temperatures in the teens or colder, and wind chill temperatures as low as -15ºF to -20ºF. Especially if you become stranded upon local and area highways and interstates and are exposed to the elements with no shelter.
Preparations should be made now to protect livestock and pets as well as water pipes and faucets.
Area Snowfall Forecasts.
NWS NDFD Forecast Storm Total Snowfall Amounts.
(From Tuesday - Thursday Afternoon). 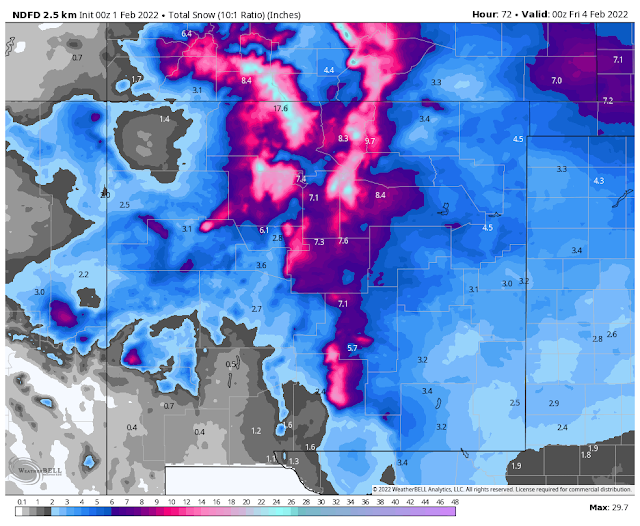 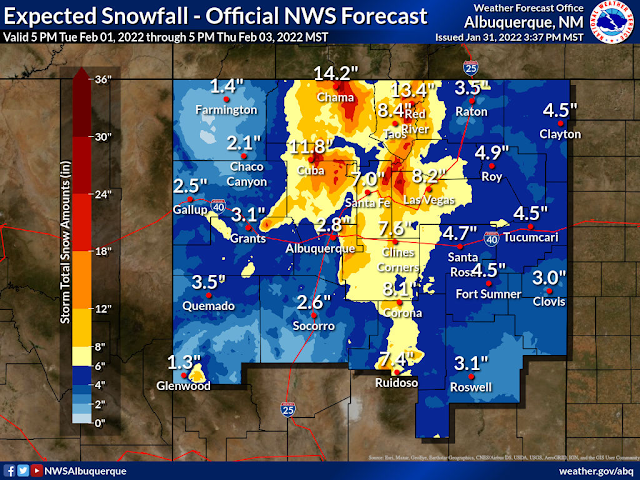 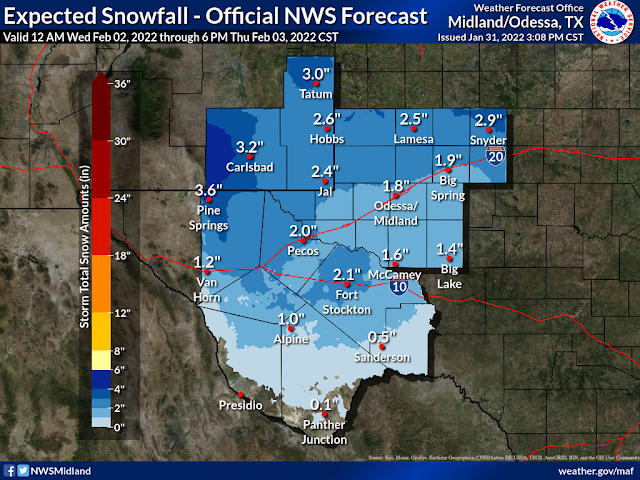 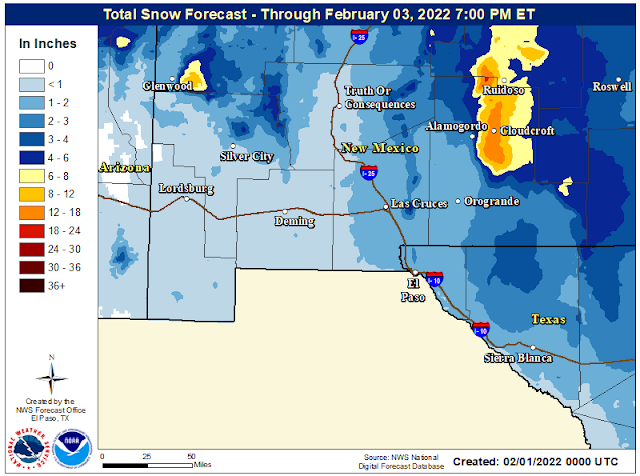 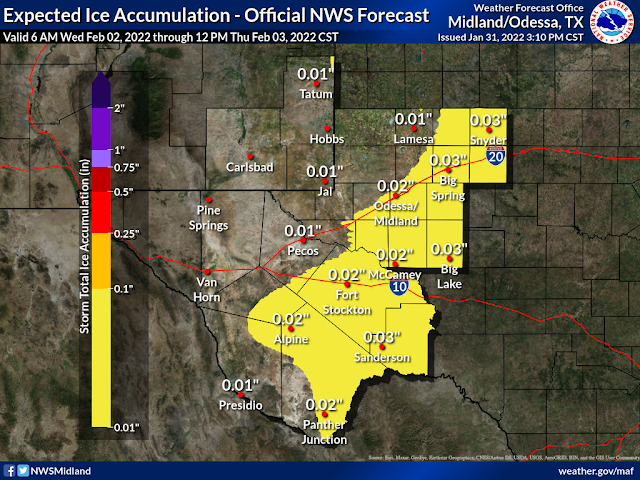 Key Points To Remember.
Current Winter Storm Watches/Warnings In Effect.
1. A Widespread Major Long Duration Winter Storm is forecast areawide that will be accompanied by bitterly cold temperatures and dangerously low wind chill temperatures (-5ºF to -20ºF). A few locations may experience near-blizzard to blizzard conditions at times late Wednesday night into Thursday night...especially over and near the mountains.

2. Moderate to heavy snow is forecast for many areas. Some mountain locations may measure storm total snowfall amounts by the feet not inches. Some areas across Southeastern New Mexico and West Texas may see a wintry mix of rain and freezing rain before transitioning over to all snow Wednesday night into Thursday.
3. Many locations may not see the thermometer rise above freezing from Wednesday/Wednesday night into Saturday afternoon. Depending upon the snowfall/snow cover and how soon our skies clear, many locations could record low temperatures below zero in the Thursday through Saturday morning time frame. Some mountain communities may see readings in the -20ºF or colder range.
4. Life-threatening conditions will develop on many of New Mexico's and the nearby Texas Panhandle and West Texas highways and roads Wednesday night into Friday. Due to snow, heavy snow, blowing and drifting snow, icy and slick highways and roads, near-zero visibilities in whiteout conditions. Road closures are likely in many areas and some may be widespread.

5. Rescue may be next to impossible for a time in some of the harder impacted areas until the storm clears. New Mexico has a long history of stranded motorists on state highways and roadways during storms of this magnitude.
6. Power outages will be possible in some areas due to the heavy snow, ice accumulations, and strong winds.

7. Livestock exposed to the weather elements without shelter will be at risk. This includes local dairies in Southeastern New Mexico. Remember to protect your pets and water pipes.

8. Be prepared for changing weather conditions and forecasts as more information becomes available Tuesday into Wednesday concerning this dangerous winter storm. Additional Winter Storm Watches, Warnings, and Advisories will likely be issued for the state and nearby areas.

9. Please stay abreast of all of our local forecasts, watches, warnings, and advisories that are being issued by our regional National Weather Service Offices listed below. Click on the links to visit their web pages.
10. Now is the time to prepare and stock up on necessary supplies and other necessities.