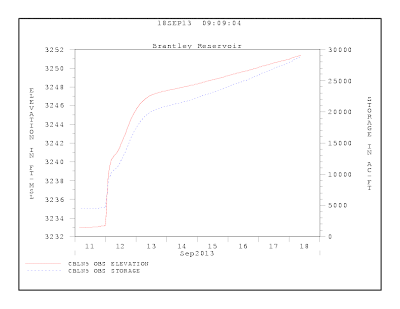 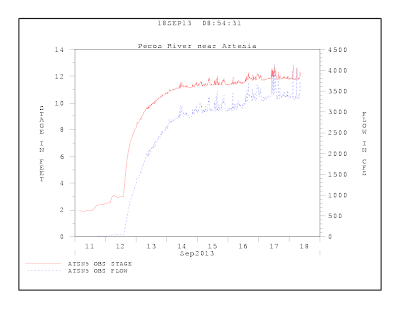 Current Flow On The Pecos River.
Courtesy Of The U.S. Army Corps Of Engineers.
On The Bridge On US Hwy 82 6 Miles East Of Artesia, NM 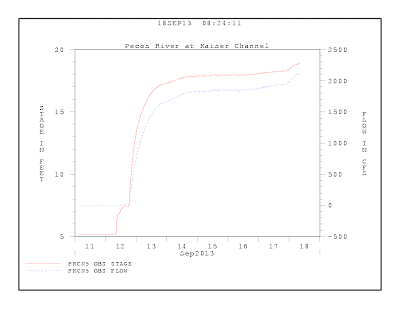 Current Flow On The Pecos River.
On The Kaiser Channel Near Lakewood, NM.
Courtesy Of The U.S. Army Corps Of Engineers. 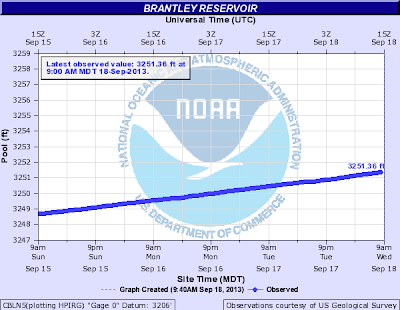 Flash Flooding was once again observed in the 16 Springs Canyon area east of Cloudcroft yesterday afternoon. But southeastern New Mexico dodged yet another bullet when the forecast thunderstorms along with the possibility of additional flash flooding failed to develop. Our Flash Flood Watch was cancelled early yesterday evening.

Lots of runoff continues to work its way down the Pecos River and into Brantley Lake. Before the rains started last Wednesday, Sept 11, 2013, the lake level was about 1,500 acre feet. As of 9:30 AM MDT this morning it is about 29,000 acre feet. The current depth of the Lake at the gauge stands at 32.51'. Brantley Lake was designed to hold 335,000 acre feet of water...so it has a lot of room to hold much more flood waters than is currently being stored in the lake.

What Is The Local Flash Flood Threat?

Scattered thunderstorms are currently forecast for southeastern New Mexico today into Friday. At this time the threat for a continued widespread flash flood threat here in the Pecos Valley continues to diminish with time. However, any thunderstorm that drops locally heavy rainfall may possibly produced localized flash flooding. It will not take much rainfall to quickly produce localized flooding over and near any of our arroyos. This will be especially true across the southern Sacramento Mountains, particularly in the east slopes east of the Cloudcroft area where a Flash Flood Watch is in effect today into this evening.