Two Winter Storms Headed Our Way - The Second Just In Time For Christmas.

Average Temperature For December So Far. 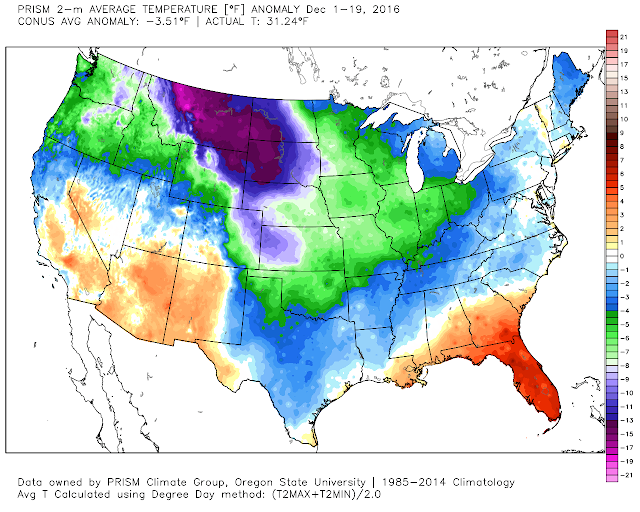 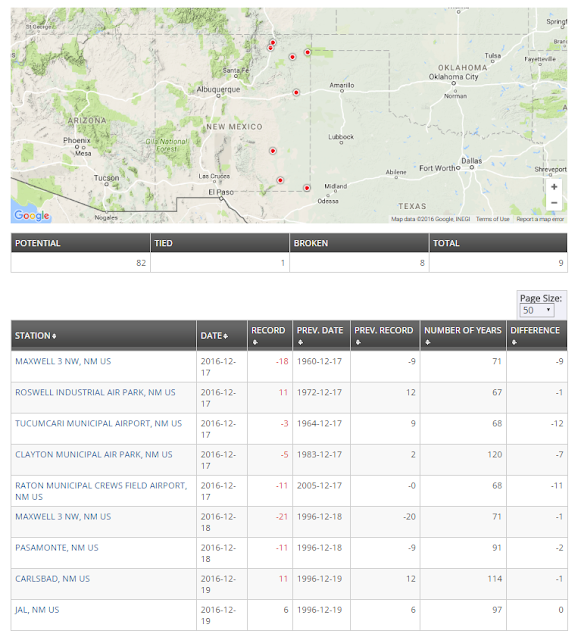 So far this December has been a couple of degrees below normal for most of Eastern and Southeastern New Mexico. Roswell set a new daily record low temperature of 6ºF this past Sunday, December 18th. The previous low temperature for that date was 7ºF set in 1964.

The Carlsbad Climate Co-Op Station also set a new daily record low temperature on the morning of the 19th with a reading of 11ºF which beats the previous low of 12ºF set in 1996.

The Jal Climate Co-Op Station tied their record low of 6ºF on the morning of the 19th last set back in 1997.

Two Winter Storms Headed Our Way - The Second In Time For Christmas! 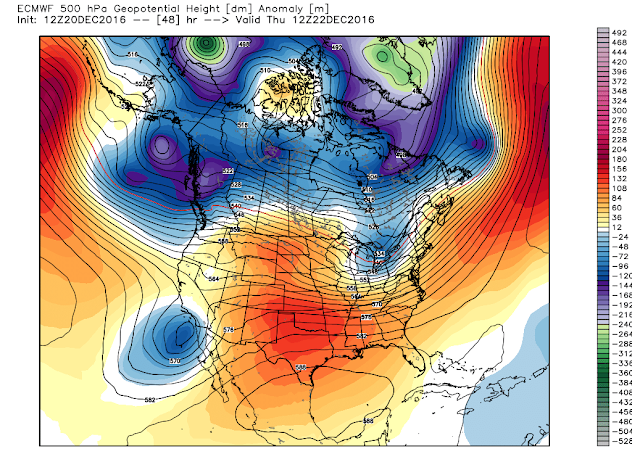 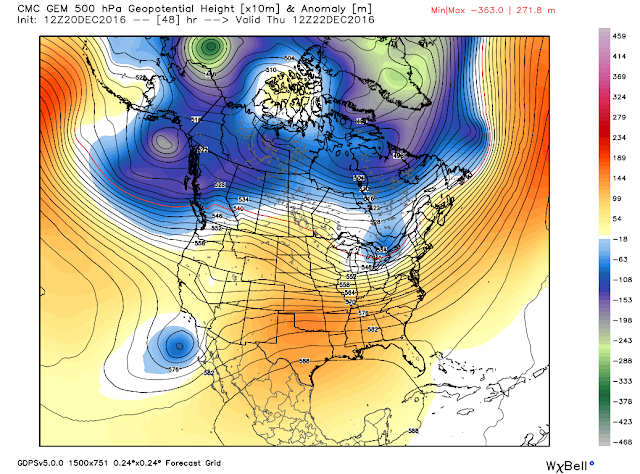 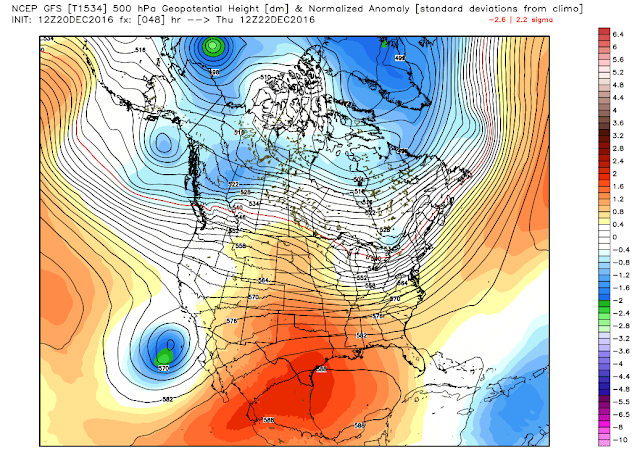 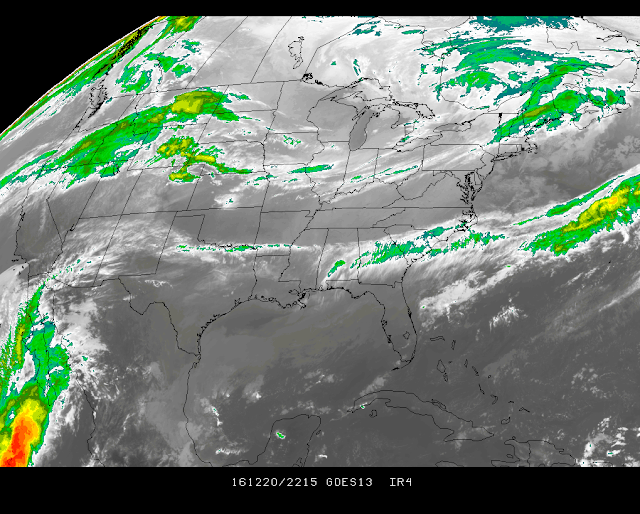 A cutoff upper level low continues to meander west of Central Baja California this afternoon. All three of the computer forecast models (ECMWF, GEM, and GFS) have this storm wobbling northeastward tomorrow into Friday as it slowly opens up into a trough of low pressure. Abundant mid and high level moisture is already streaming northeastward from the storm into the Desert Southwest and will continue to do so into Friday. Notice the bright orange and red shades on the infrared satellite photo this afternoon over the Baja Region...more than likely this indicates some thunderstorm activity which is a testament of the strength of this storm.

Wednesday Warm Ahead Of The Storm. 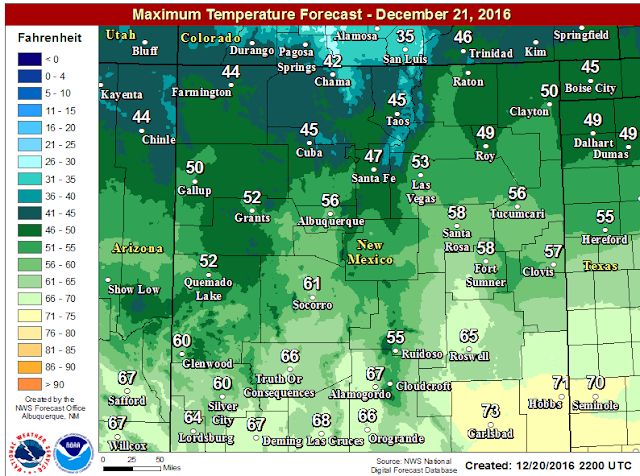 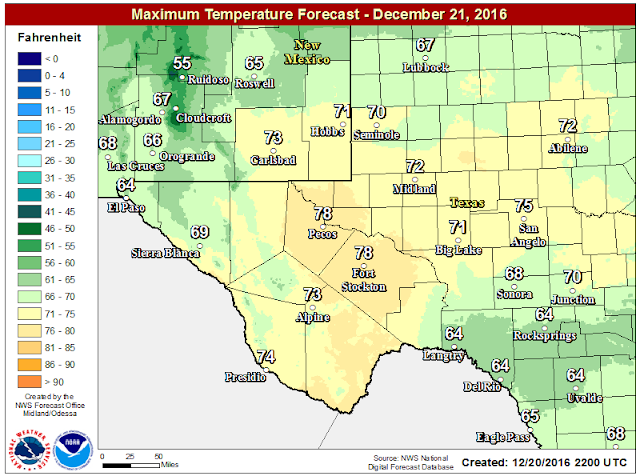 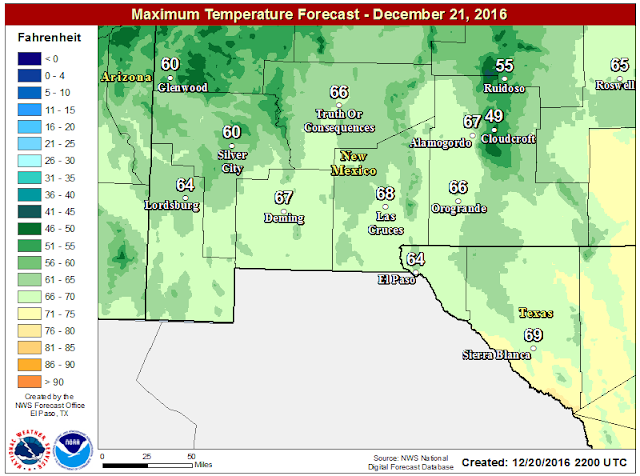 Today's highs near 60ºF was a welcome reprieve for most from the cold 30's and 40's on Sunday and Monday. Ahead of the storm and an approaching cold front our afternoon temperatures are forecast to warm up even more on Wednesday into the mid 60's to the low 70's. 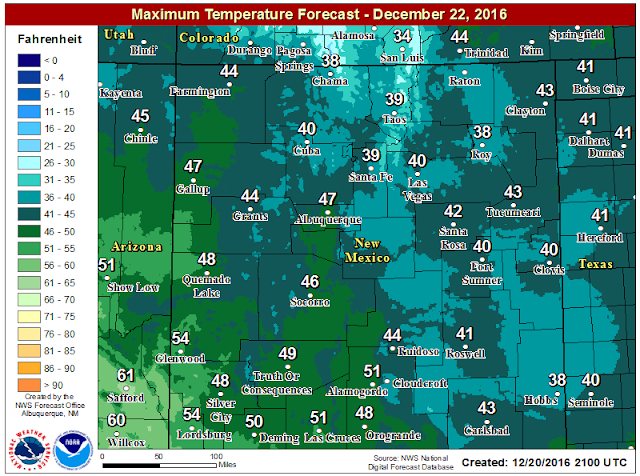 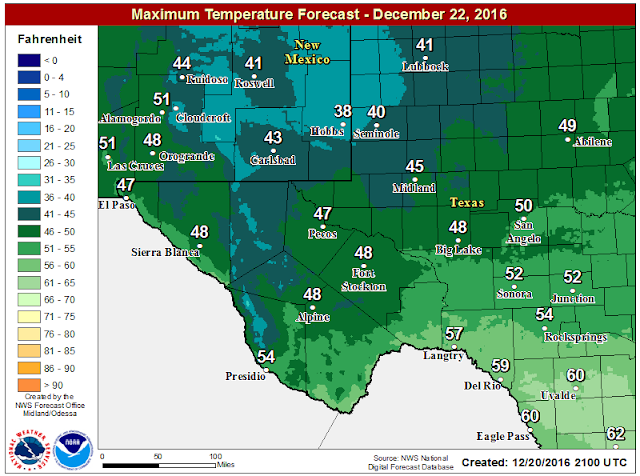 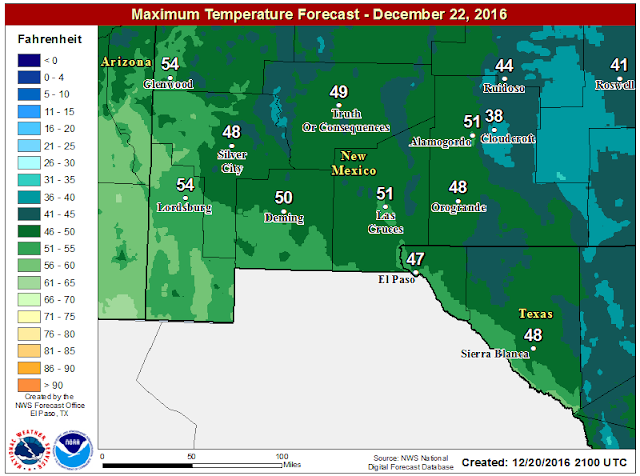 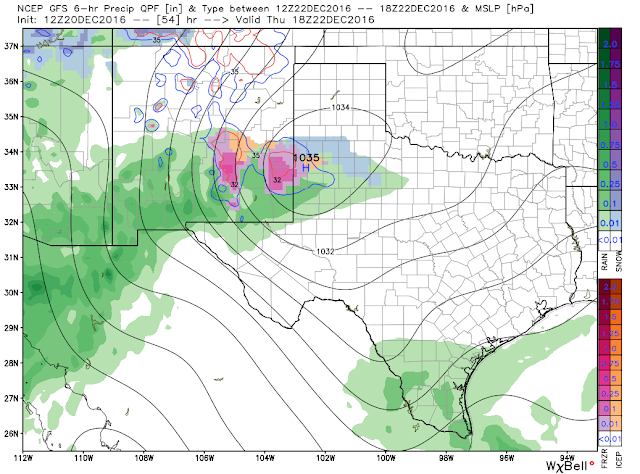 Valid At 11 AM MST Thursday. 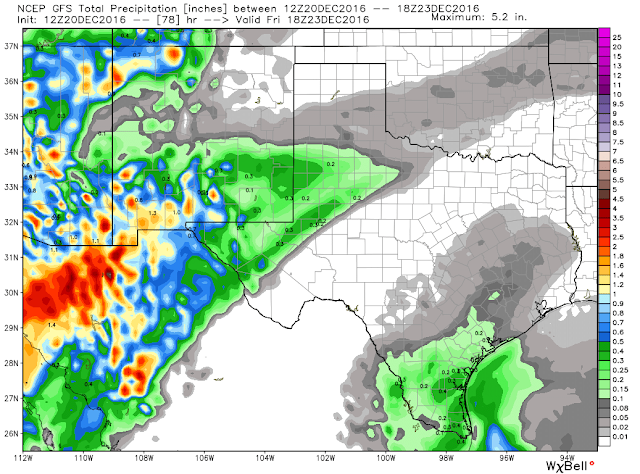 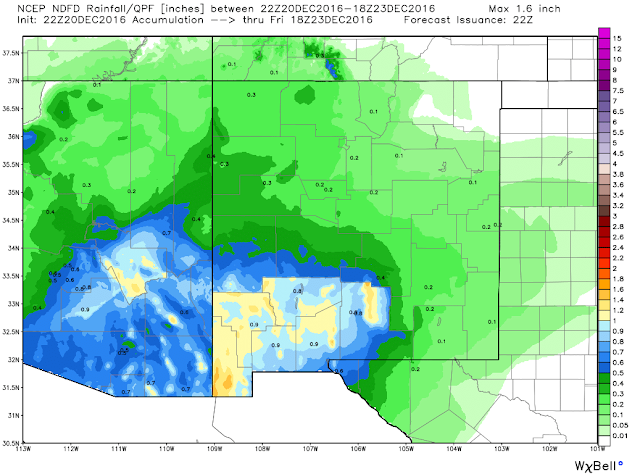 This first storm has to potential to bring moderate to even locally heavy amounts of rainfall to the area from Wednesday night into Friday. Just how much is a little up in the air right now but some locals across the southern half of New Mexico and parts of nearby West Texas could see .50" to over an inch by Friday given its subtropical connection. 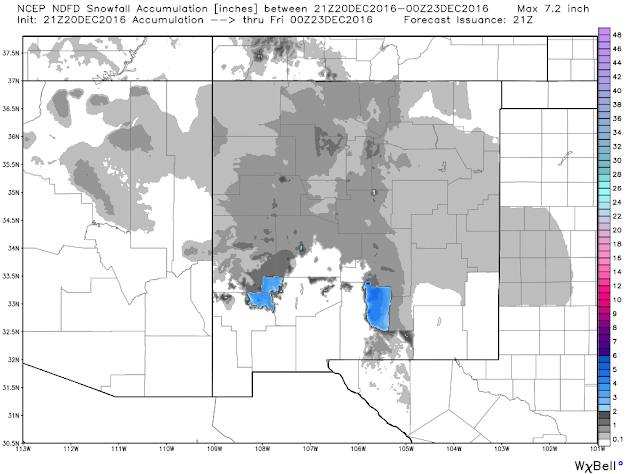 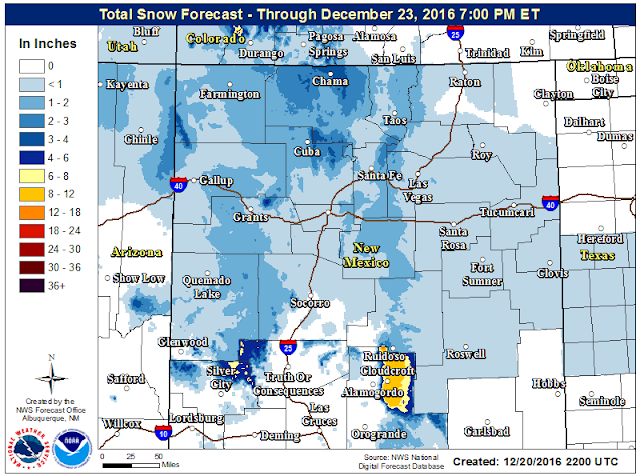 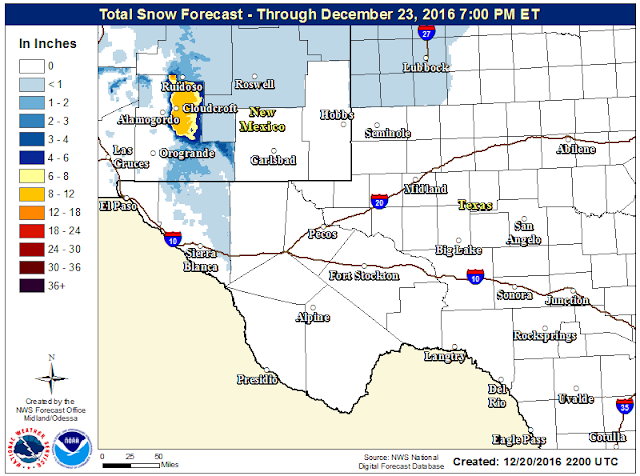 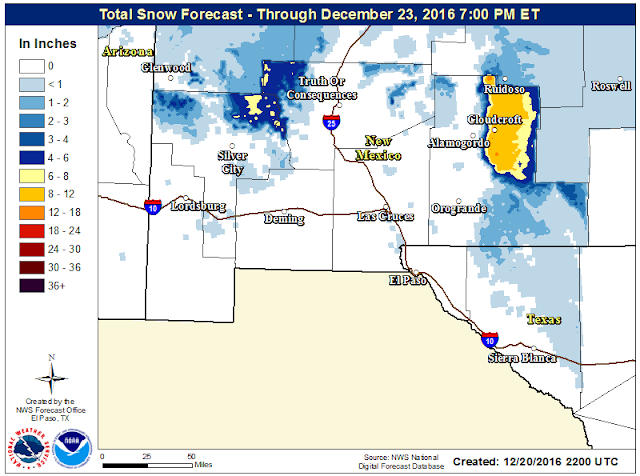 At this time the Sacramento Mountains appear to be in the best shape to receive decent snowfall totals from Wednesday night into Friday afternoon from this first storm. The higher elevations could end up with 6" to 12". While a wintry mix appears possible across the Southeastern Plains of New Mexico only light accumulations (maybe not even that in some areas) are currently being forecast.

Storm #2 Just In Time For Christmas. 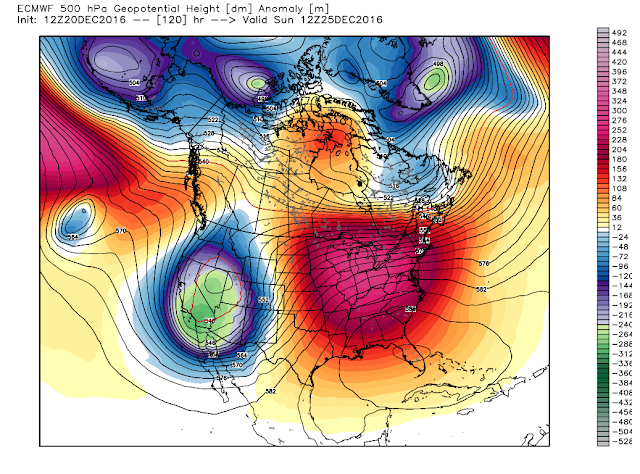 Winter storm #2 takes aim on the Land of Enchantment just in time for Christmas Eve into Christmas. Today's model runs track this one further to our north as a closed upper level low verses a cutoff upper level to our south. I'm not so sold on this track this far north and have feeling that it may end up coming a little further south than current model forecasts indicate. Anyway more wintry weather appears on tap for the state and just who gets a White Christmas will be determined by this storms exact track and speed. More on this later.

The Truth Is Stranger Than Fiction!
on December 20, 2016
Posted by Wendell Malone