Knock Knock Can I Come Down South? 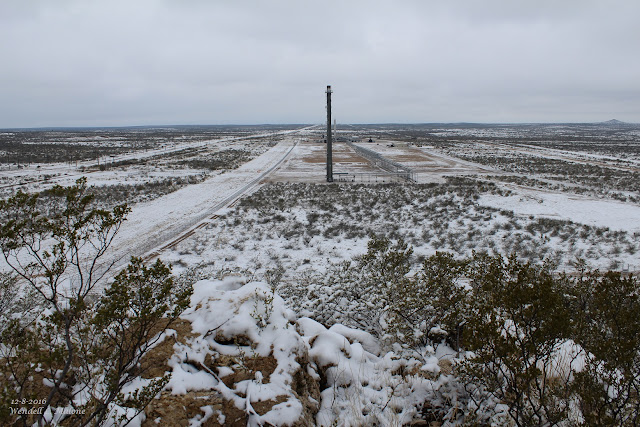 Modified arctic air invaded the area Wednesday night and as of 10 AM MST this morning its still hanging tight...refusing to let go of its grip. I recorded a snowfall total of .4" yesterday which melted down to .04" but only left a trace on the ground. The further south you went the deeper the snow became. The Carlsbad airport had a dusting on the ground at 5:00 AM yesterday morning, Whites City 1", the New Mexico/Texas State Line on US Hwy 62/180 2", and 2" at the Hidalgo Gas Plant. 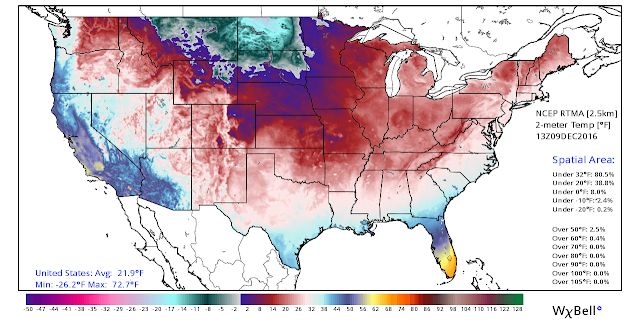 Temperatures At 6 AM MST This Morning. 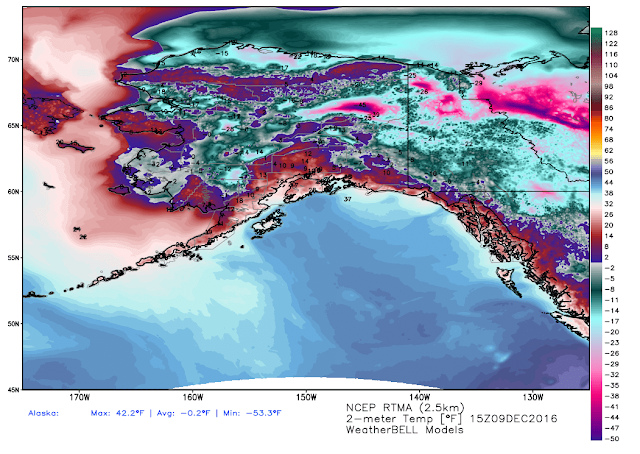 Alaska Temperatures At 8 AM MST This Morning. 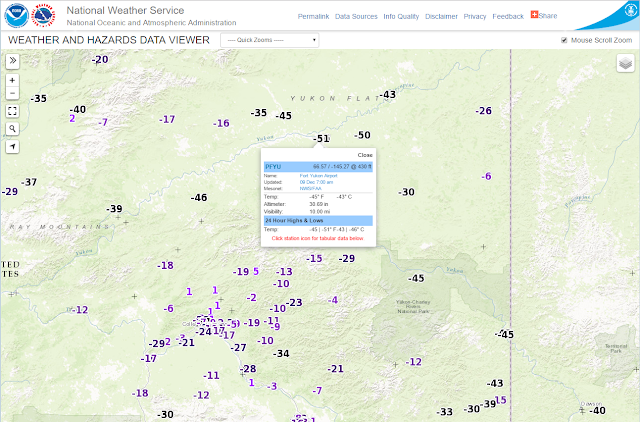 Arctic air continues to pool in Central Alaska this morning and this very cold airmass will get pulled to the south and southeast the first of next week in to the middle of the week. Although it will modify some it will still be very cold across much of the Northern and Central US by midweek. The lowest temps I've found so far this morning have been -51ºF at the Fort Yukon Airport in Alaska and temps running -20ºF to -32ºF in Western North Dakota. 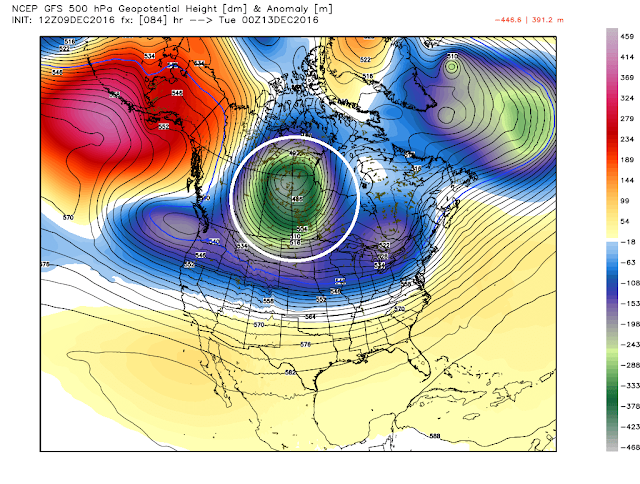 Here comes the Polar Vortex. That's the recent headlines or something to that effect that has been covered over the past couple of days and reported by the Mainstream Media, some TV Meteorologists, Bloggers, and others. I've almost come to hate that term "Polar Vortex". Not that the term is incorrect but how it is misused by these people. The Northern Polar Vortex shows up every winter and there is nothing unusual about this. it has nothing to do with Global Warming or Climate Change as many would like for you to believe. What makes it grab the headlines is when it shifts further south than normal as such will be the case next week.

Circled in white on the graphic above is the center of a deep upper level low...aka Polar Vortex. The graphic and the GFS model run at 6 AM MST this morning are forecasting it to be centered in Northern Canada by Monday at sunset. Like any upper level storm its exact track to the south and southeast will help determine just where the coldest airmass located at the surface underneath it will be. Should it take a more southerly jaunt instead of to the southeast as current forecasts indicate then a deeper and stronger arctic airmass would arrive in Southeastern New Mexico and West Texas by around Wednesday of next week. 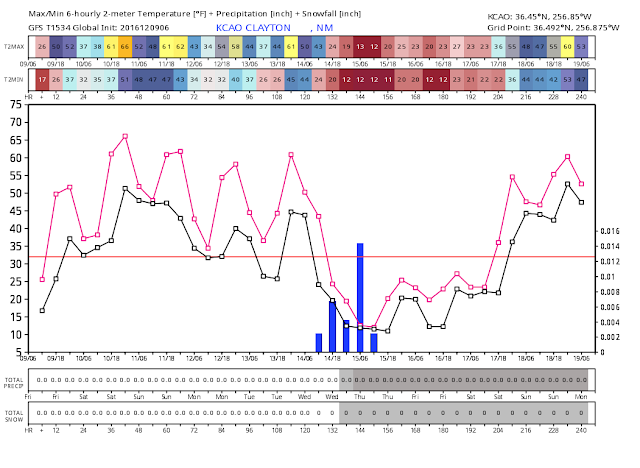 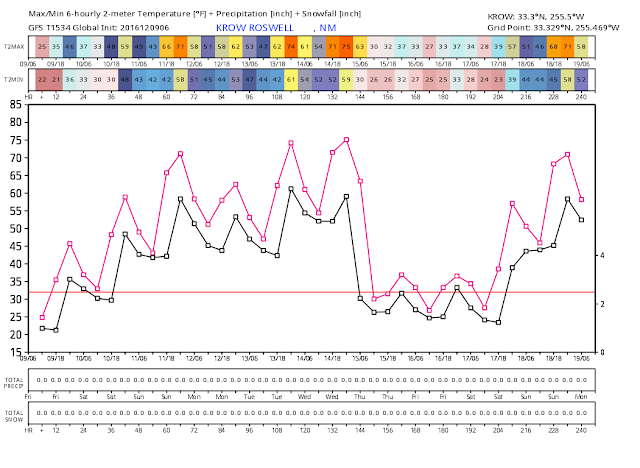 All aboard the crazy temperature train and lets go for a ride up and down. Our forecast highs today locally are in the mid 40's although I'm wondering if this is going to pan out given the fact that the low clouds are hanging tight as we approach the noontime hour. Saturday's highs are forecast to be in the 60's, near 70 on Sunday, and the 60's to near 70 Monday into Wednesday.

Knock Knock Can I Come Down South? 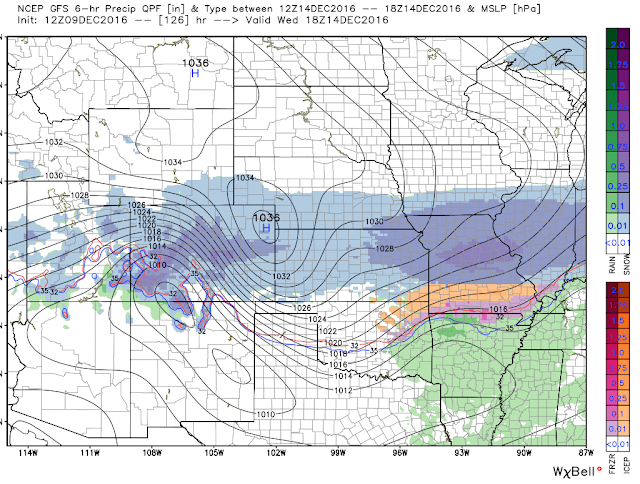 Our next arctic invasion is pegged for next Wednesday. This mornings 12Z or 5 AM MST run of the US GFS computer forecast model depicts the arctic frontal boundary oozing into far Northeastern New Mexico by around noontime next Wednesday. The timing on its arrival is just too far out in time to be sure yet so this may and likely will change. It could arrive in Northeastern New Mexico as early as next Tuesday or as late as next Thursday. More on this in the coming days ahead. 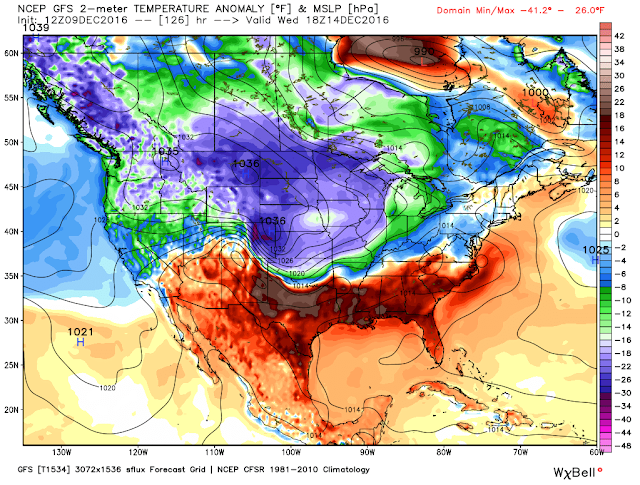 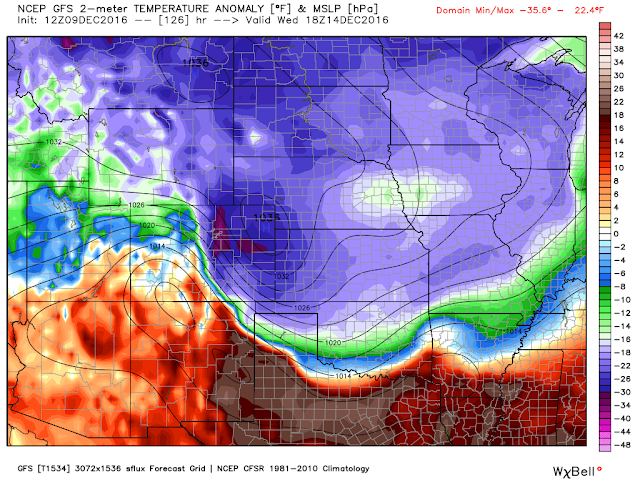 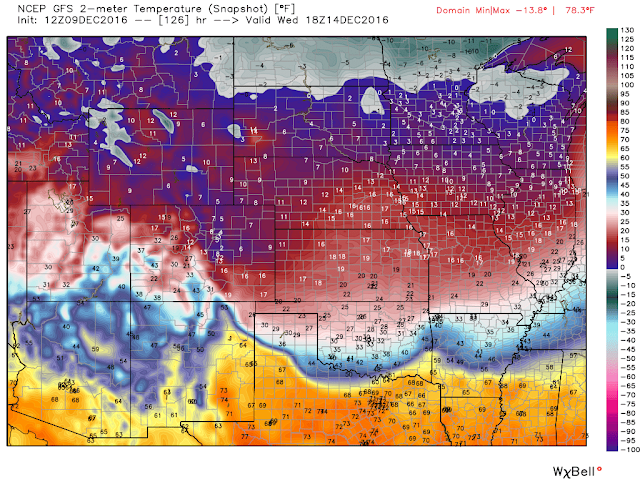 Now take a look at the graphic above and notice the nearly 70-degree difference in temperatures that are forecast to occur across the arctic frontal boundary next Wednesday. Single digits in Eastern Colorado to above 70 in Southeastern New Mexico and West Texas. While temps across much of North Dakota are forecast to be below zero. 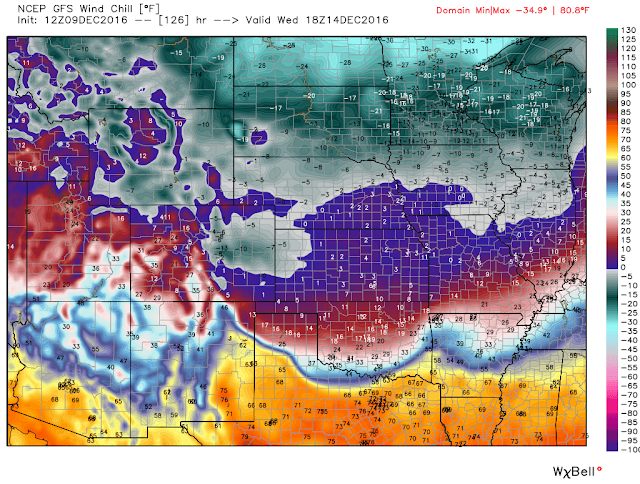 At the same time wind chill values are forecast to range from the teens in far Northeastern New Mexico to the single digits and below zero in Eastern Colorado northward to Montana, and close to -30ºF in parts of North Dakota. So another way to look at this is to consider that the difference in apparent temperatures (or what it really feels like outside) from Southeastern New Mexico to North Dakota will be close to 100ºF.

Not Looking Good For More Snow To Fall In New Mexico. 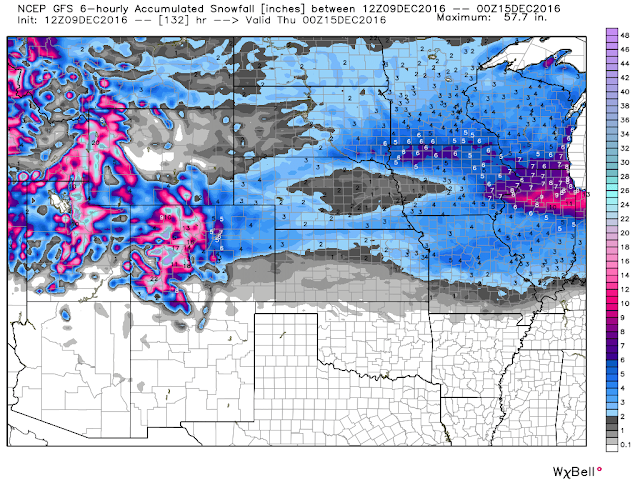 Unfortunately with a near to zonal flow aloft the prospects for more snow in the state are not looking too good over the next five days. The only way this may change is if the jet stream buckles the flow aloft and starts sending storms southward into the state. 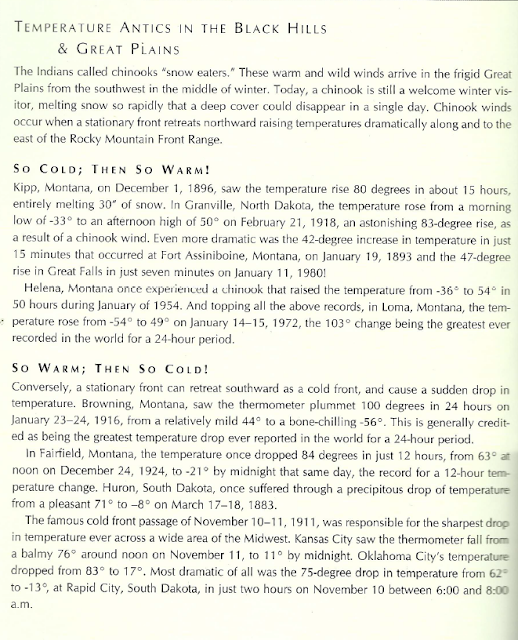 From the spine of the Rockie Mountains east out onto the plains states so wild temperature changes have occurred in the winter. New Mexico is no exception. I well remember those past winters when an arctic air mass had invaded the plains of the state east of the Central Mountain chain. High temps in locations such as Albuquerque, Santa Fe, Socorro, Alamogordo, and sometimes have been in the 60's and even the 70's while places like Clayton, Clovis, Roswell, Artesia, Carlsbad, and Hobbs (all located at 3,000' to 4,000' above sea level) remained in the teens. I've seen high temps never get out of the teens here in the Pecos Valley while Ruidoso was in the 60's and Cloudcroft the 50's (located at 7,000' to 9,000' above sea level). Arctic air masses are notorious for being shallow in depth (sometimes only a couple of thousand feet deep) and sometimes they aren't deep enough to work their way up and over the Sacramento Mountains.