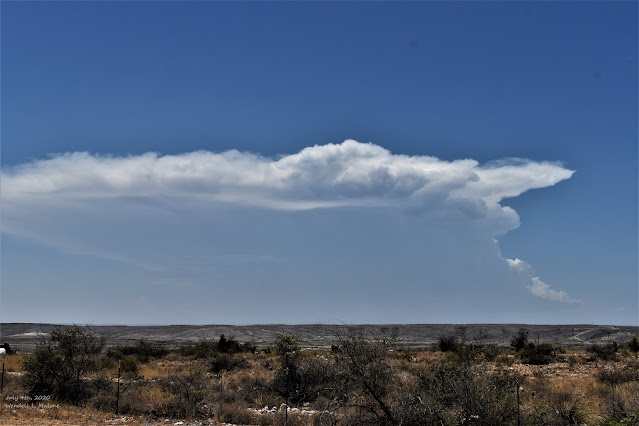 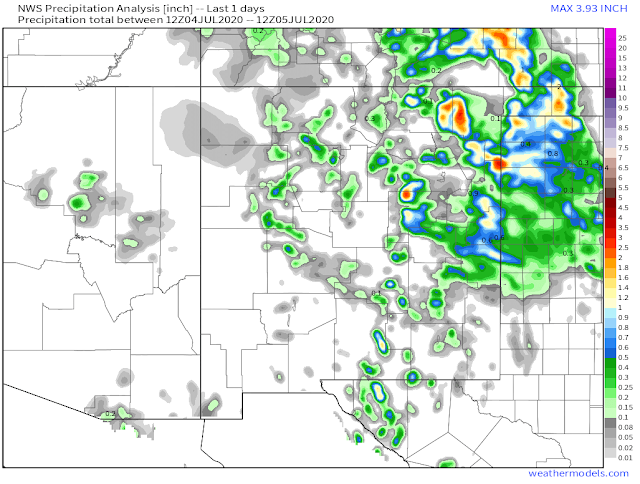 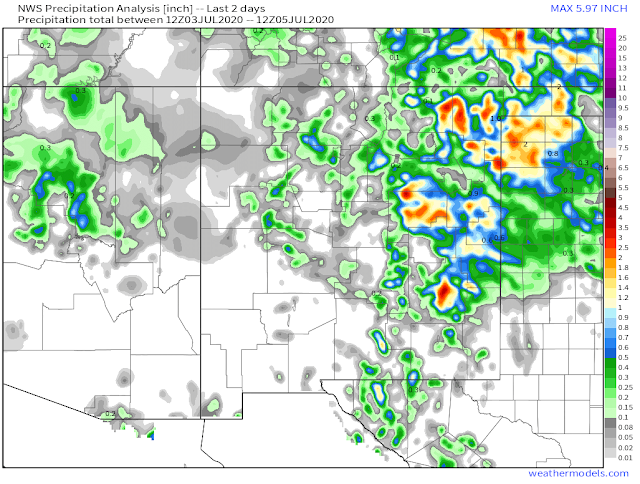 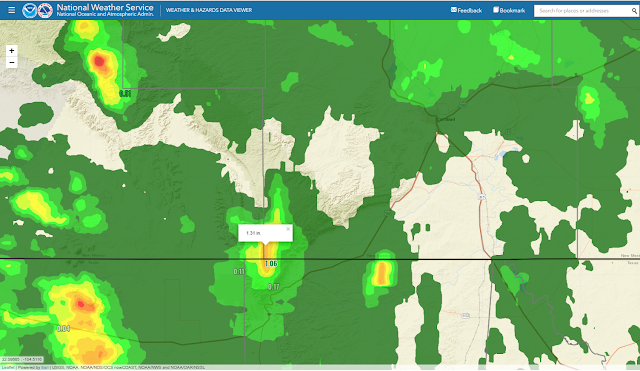 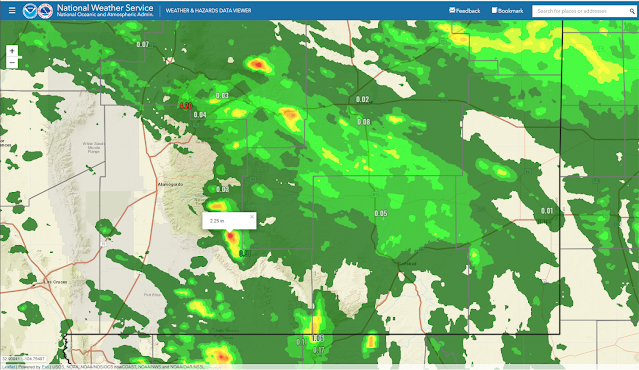 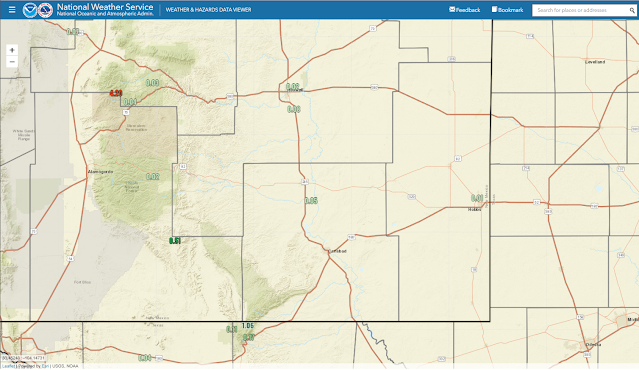 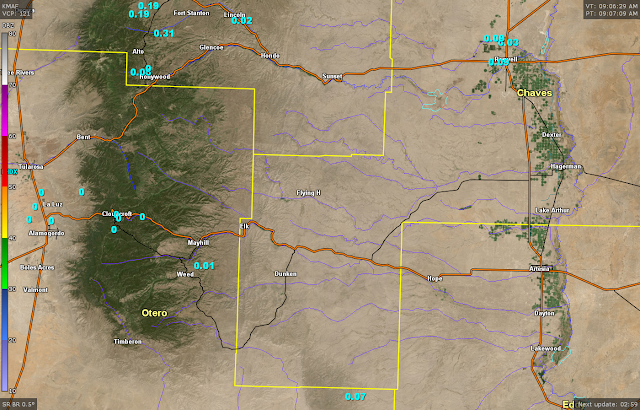 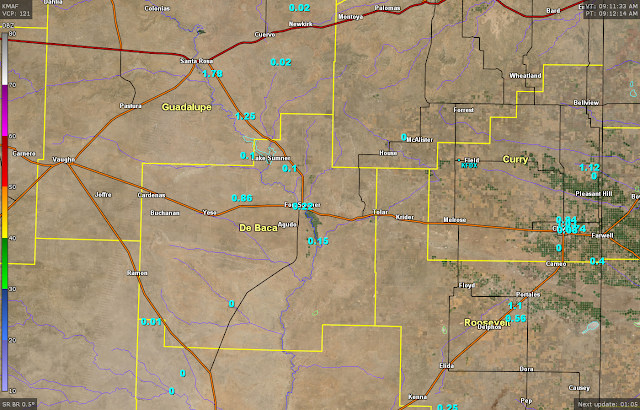 As expected scattered late afternoon and overnight thunderstorms have popped up each day over the past three days. Looking at the reported rainfall totals above most of us have been left high and dry. But some of you who have managed to get a storm or two have done pretty well. A CoCoRaHS Rainfall Observer located southeast of Santa Rosa measured 1.78" of rainfall overnight. The Dog Canyon Raws measured 1.06" of rainfall during yesterday's early afternoon thunderstorm (picture above). So far over the past three days northeastern and eastern New Mexico as well as northern Chaves County have received the most rain.
Hit & Miss Thunderstorms - A Few Marginally Severe.
Today's SPC Severe Weather Outlook. 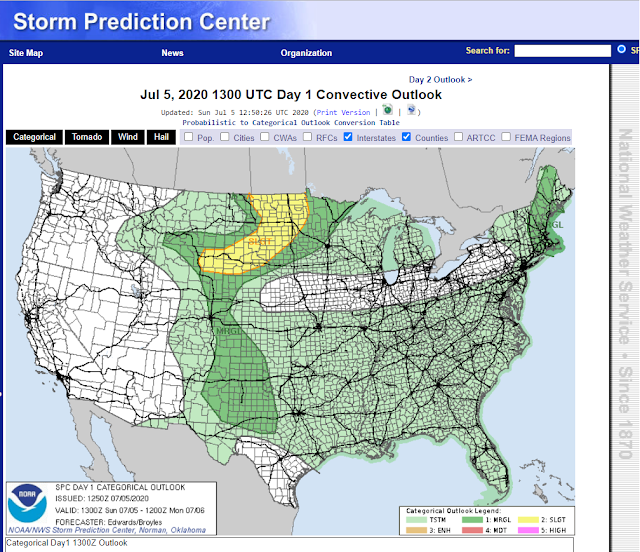 Northwesterly flow aloft will once again steer thunderstorms to the southeast off of the mountains and northeastern and eastern plains this afternoon into late tonight. Some of these will be Marginally Severe with the main threat being damaging thunderstorm wind gusts in excess of 60 mph. Some hail may also occur with a few of these storms. Locally heavy rain may also accompany the stronger longer-lasting storms. Deadly cloud to ground lightning will occur with any thunderstorm so remember...when thunder roars go indoors.
Many Record High Temps May Be In Danger Of Being Broken.
New Mexico Forecast High Temperatures.
Update From This Mornings 12Z (6 AM MDT ECMWF Model Run). 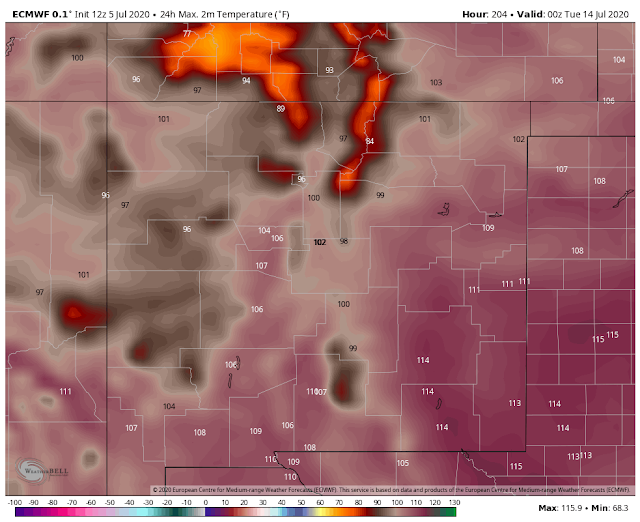 WOW! This morning's run of the European forecast model (ECMWF) is even hotter next week with our high temps in New Mexico. For Roswell, Artesia, and Carlsbad it is calling for highs of 110º starting a week from today (next Sunday) with 114º a week from tomorrow. 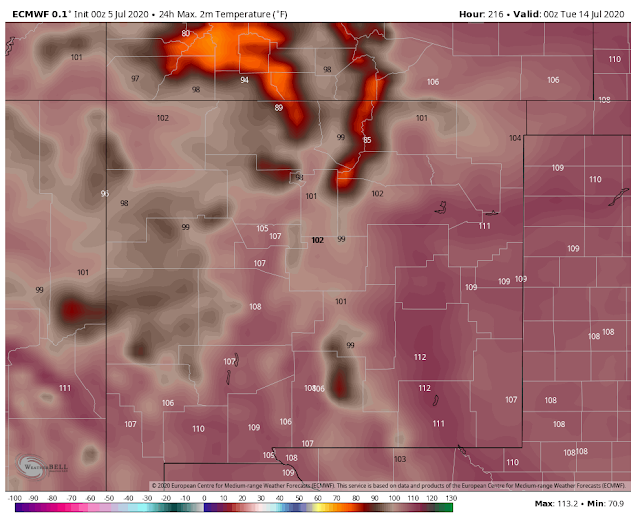 Valid Monday, July 13, 2020.
Should the European forecast model (ECMWF) turn out to be correct we may be looking at a major heatwave over New Mexico and the area next week into the following week. Daily record high temperatures could be in danger of being broken as well as some July record highs. You have to use caution with the models when looking this far out but both the ECMWF and the GFS do agree for now that it's going to get miserably hot next week.
Note the forecast high temperatures of 112º in the Pecos Valley with temperatures in the Sacramento Mountains ranging from near 90º at Cloudcroft (8,750') to 101º at the Sierra Blanca Regional Airport northeast of Ruidoso (6,759").