Quick Hitting Winter Storm Reminds Us Its Really Not Spring Yet. 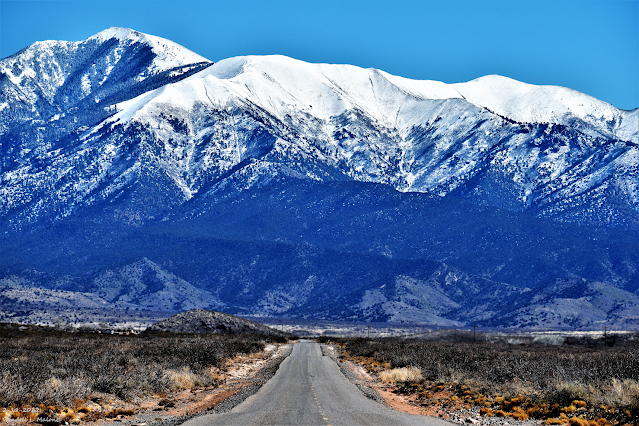 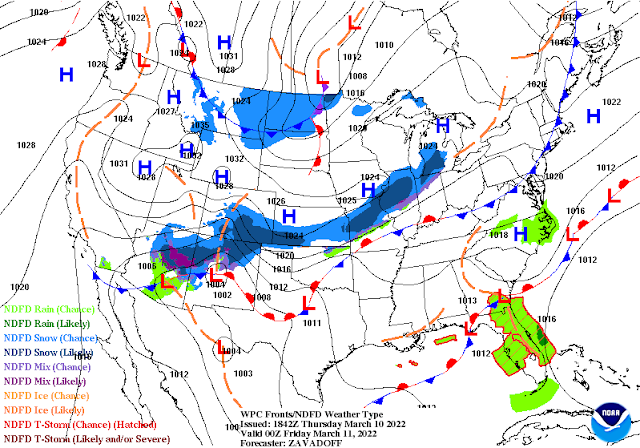 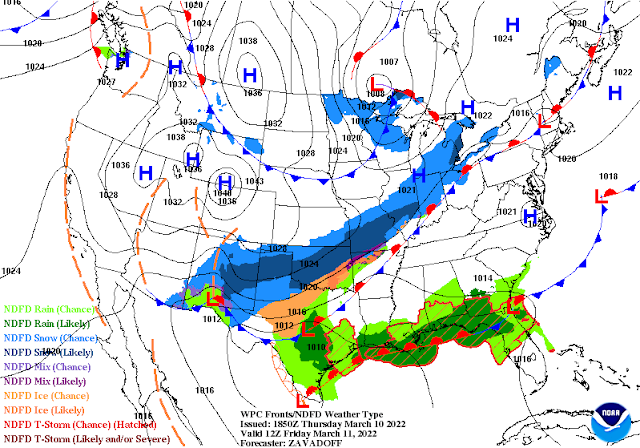 Valid At 5 AM MST Friday Morning.
An arctic cold front has stalled (become stationary) across Southeastern New Mexico this afternoon. This front will move southward and out of the state this evening. A much colder airmass lies to our north behind the front. Denver, Colorado set a new record low temperature for the day this morning with a reading of -7ºF. This beat the previous record low for the date of -3ºF set in 1932. This was the coldest temperature observed in March in Denver since 1960.
As of 4 PM MST regional temperatures range from 21ºF in Clayton with a wind chill of 8ºF to 37ºF in Clovis, 55ºF in Roswell and Hobbs, 59ºF in Artesia, 62ºF in Carlsbad. It was 56ºF in Mayhill, 50ºF in Ruidoso and Timberon, and 43ºF in Cloudcroft.
NWS NDFD Forecast Low Temperatures.
Friday. 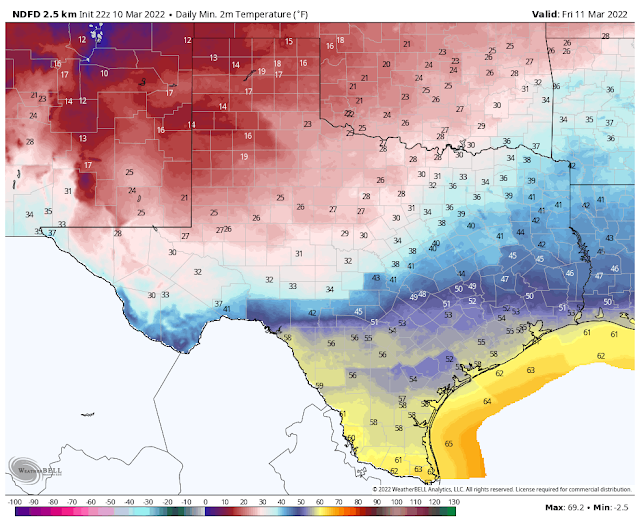 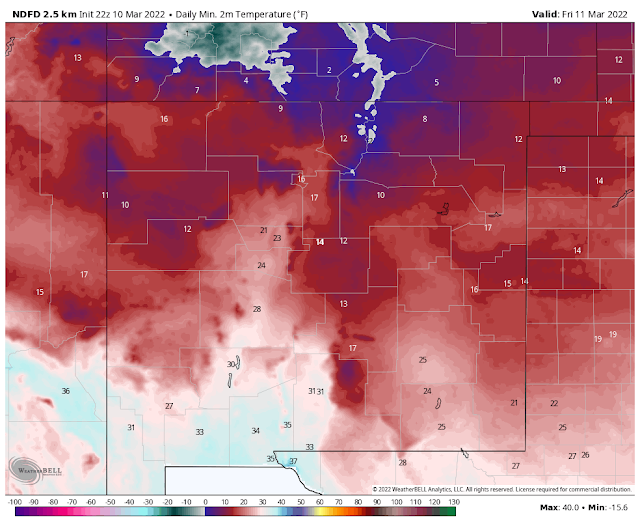 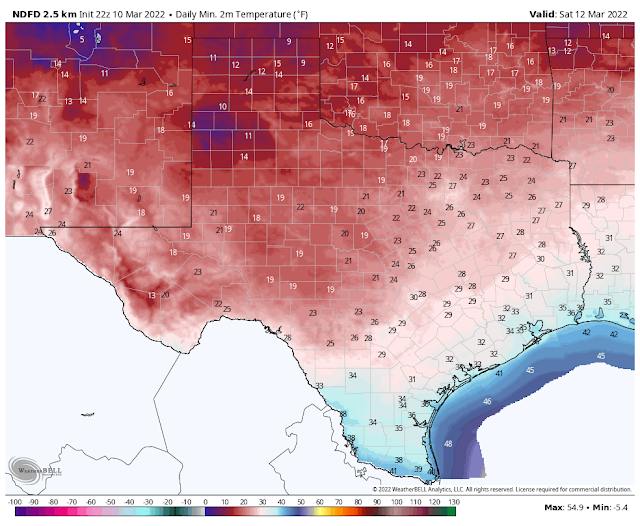 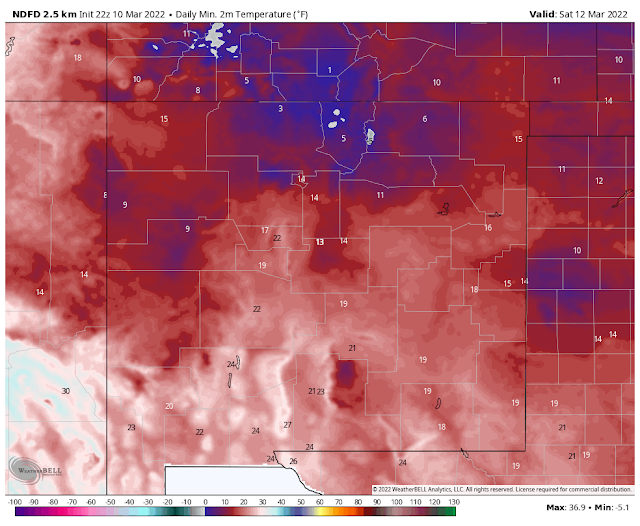 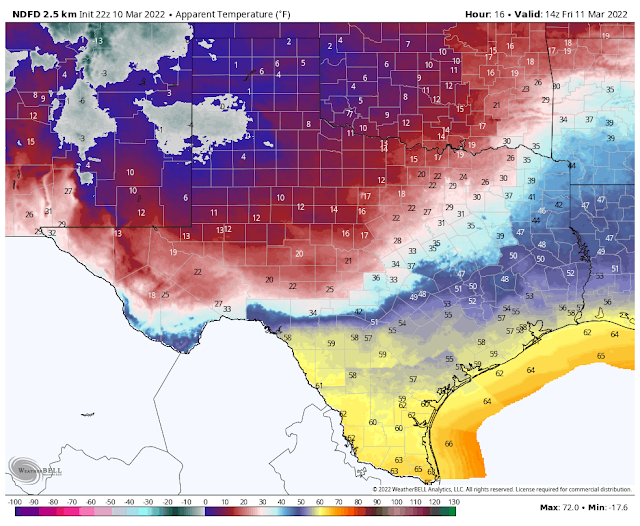 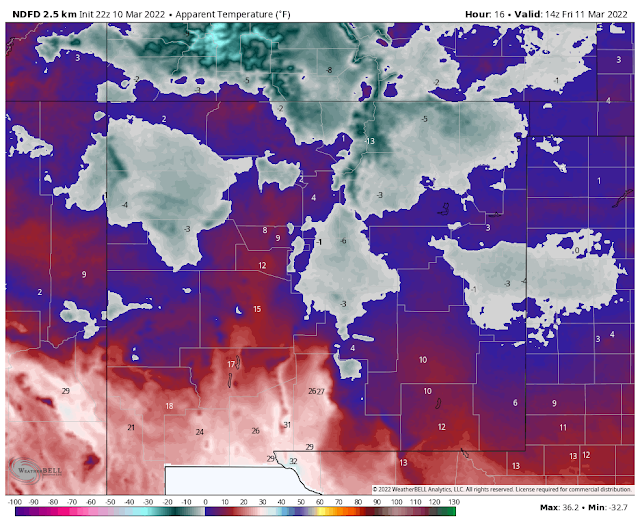 Turning Colder Tonight.
Colder air will work its way southward and westward through the local area tonight behind the frontal boundary. Low temperatures Friday morning are expected to be in the low 20's across the Southeastern Plains and in the Queen area of the Guadalupe Mountains. Lows across Eastern New Mexico in the Clovis and Portales areas will be in the mid-teens, as will lows across the Sacramento Mountains.
Wind chill temperatures late tonight into Friday morning are going to get your attention. Wind chill temperatures are forecast to drop down to as low as around 5ºF to 10ºF over the Southeastern Plains. The Clovis and Portales area will see wind chill temperatures as low as -5ºF. Wind chill temperatures across the Sacramento Mountains will range from 5ºF to -5ºF. Northeasterly winds will shift around to easterly and southeasterly late tonight and will gust up to around the 25-40 mph range.
Snow Begins Later Tonight.
NWS NDFD Storm Total Snowfall Forecasts.
(Valid Tonight Through 5 PM MST Friday). 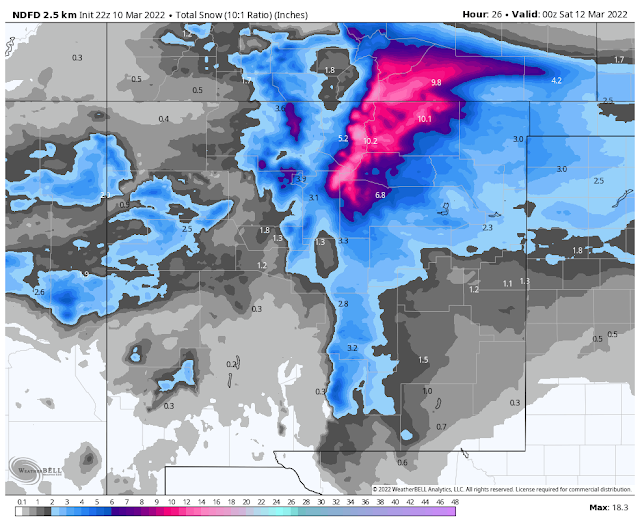 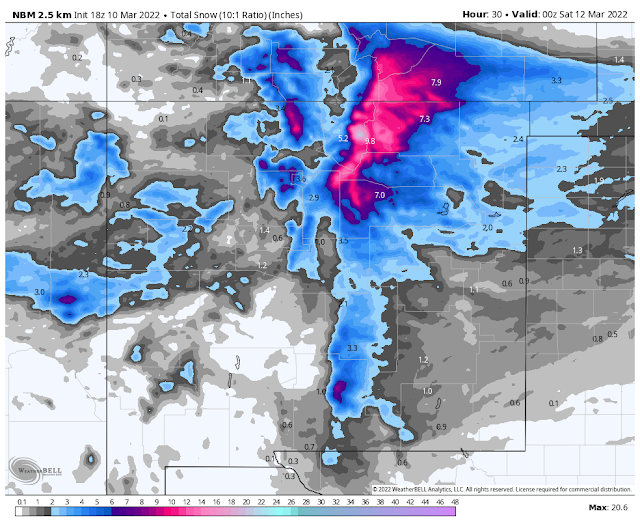 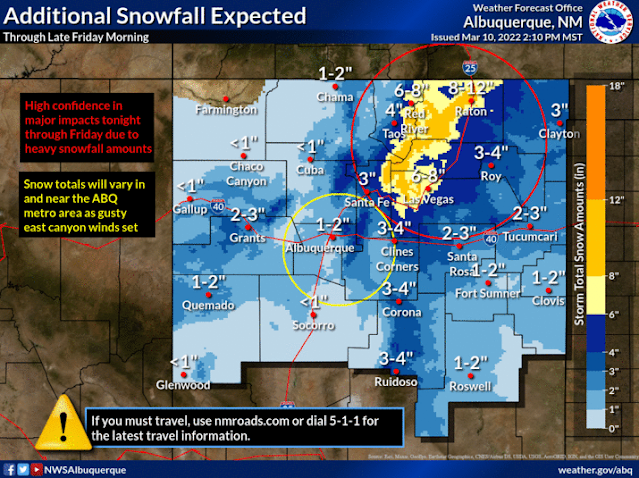 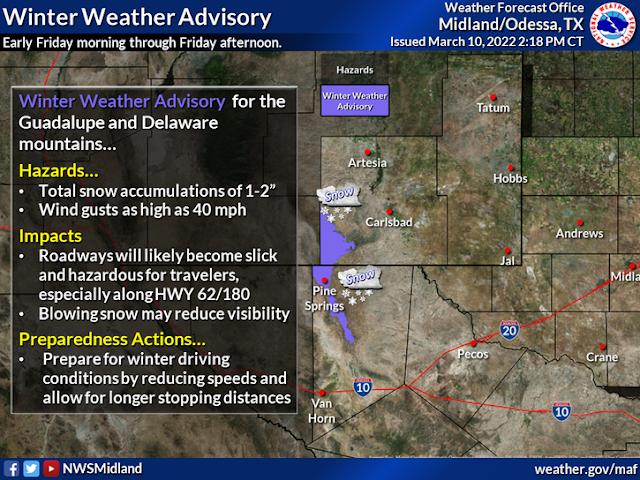 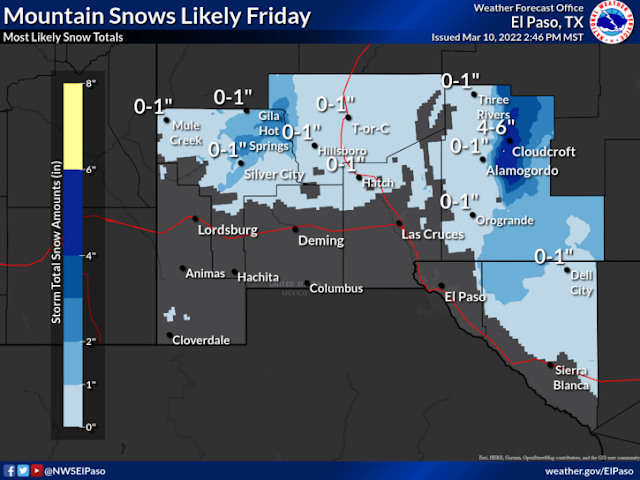 As the mid-upper level trough of low pressure dives southward into New Mexico snow will continue to spread south and east. Current forecasts have the heaviest snows falling over the northern New Mexico Mountains, the Northeastern Plains, and the Sacramento Mountains of South-Central New Mexico.
Cloudcroft, Ski Apache, Sunspot, Silver Lake areas are looking at 4" to 6" of new snow late tonight into Friday. The northern mountains of the state are expecting anywhere from 6" to 12" with the Northeastern Plains getting 3" to 4" and the Clovis and Portales areas getting 1" to 2". The Ruidoso, Capitan, and Nogal areas are expecting to get 3" to 4".
Across the Southeastern Plains, we are expecting to see 1" to 2" fall in the Roswell and Artesia areas and a half of an inch or so in the Carlsbad and Hobbs areas. Across the foothills and lower elevations of the Capitan and Sacramento Mountains snowfall totals of 1" to 3" are possible.

Snow isn't forecast to start across the Southeastern Plains until around sunrise Friday morning. Snow should begin across the northern Sacramento Mountains around midnight and then spread southward and eastward.
As with any winter storm dumping snow on the area, there may be some locations that have more snow than is currently forecast and some less. The convective banding of snow will be the root cause of this. Snow should end across the state and with clearing skies and fresh snow on the ground, Saturday morning's lows are going to be cold.
A few locations over the northern mountains will see subzero lows with single-digit lows common across western and northern New Mexico.
The teens are forecast for the Eastern and Southeastern Plains. The Sacramento Mountains will drop down into the single digits and teens.

This will be a quick-hitting storm with a rapid warm-up commencing Saturday afternoon into next week. Highs over the Southeastern Plains on Saturday are forecast to be in the 60's with the 70's expected on Sunday.
The Truth Is Stranger Than Fiction!
Email Post