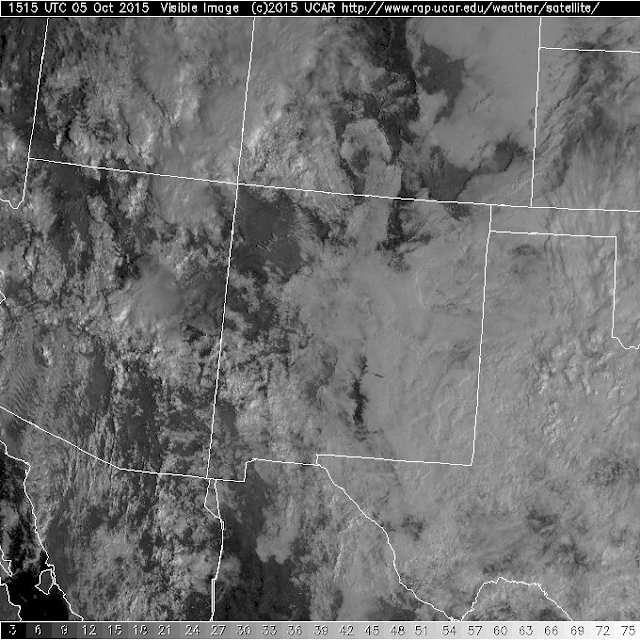 Low clouds and fog have most of eastern and southeastern New Mexico socked in this morning. But look closely and you can see the higher peaks of the Sacramento and Capitan Mountains poking up above the clouds and fog. This is indicated by the dark spot in the clouds. 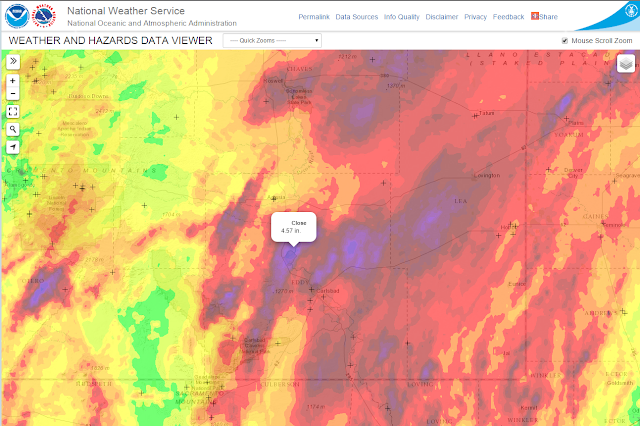 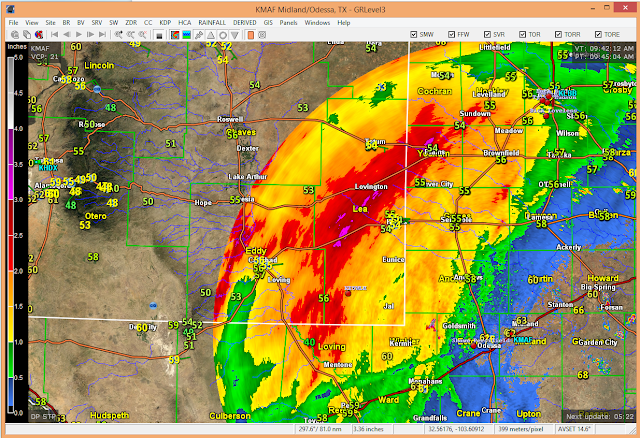 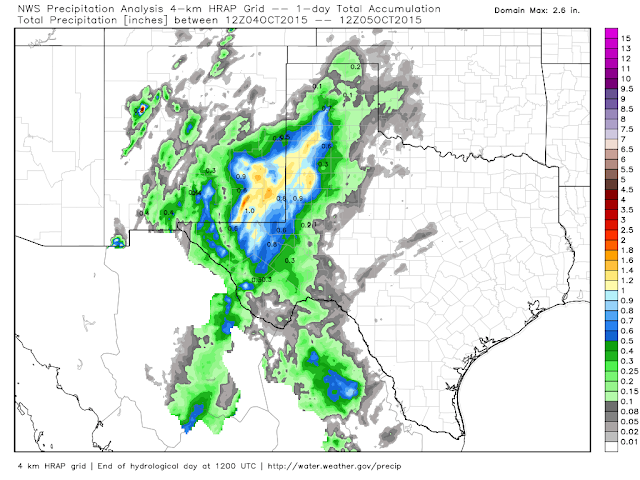 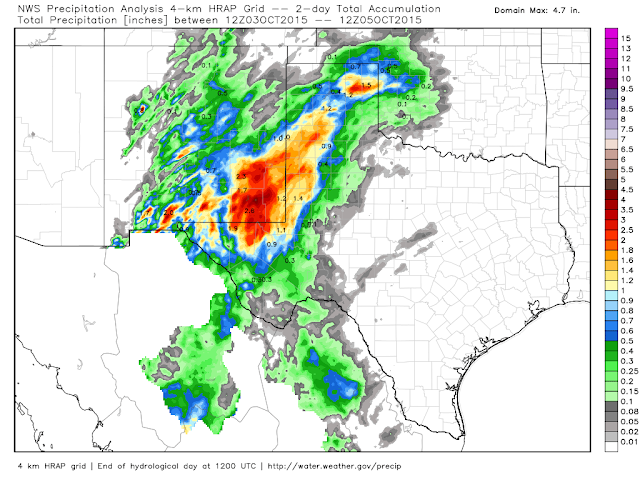 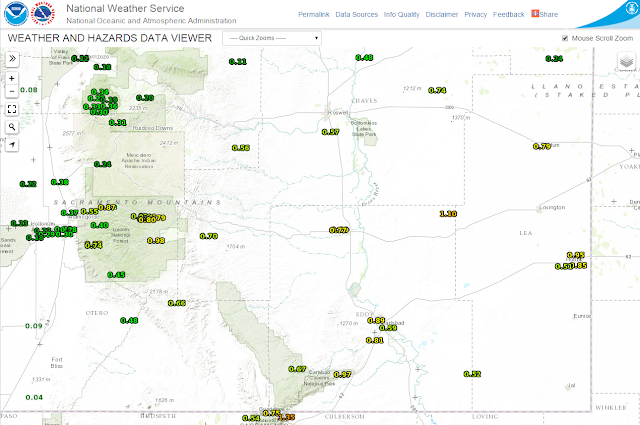 NWS MesoWest 24-Hour Reported Rainfall Totals.
As Of 9 AM MDT This Morning.

2-Day CoCoRaHS Rainfall Totals.
As Of 9 AM MDT This Morning. 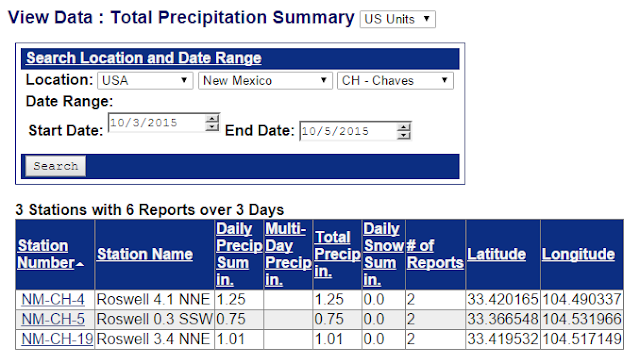 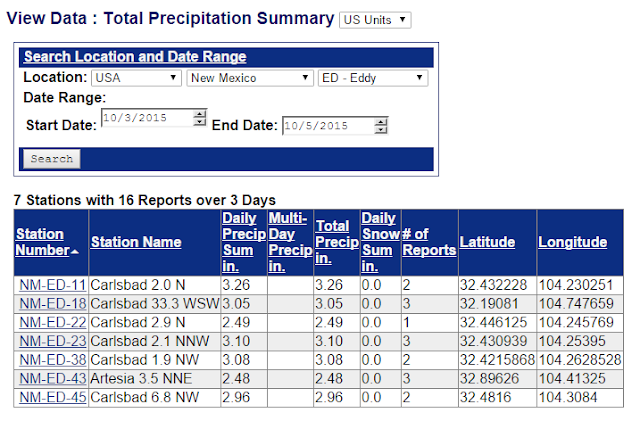 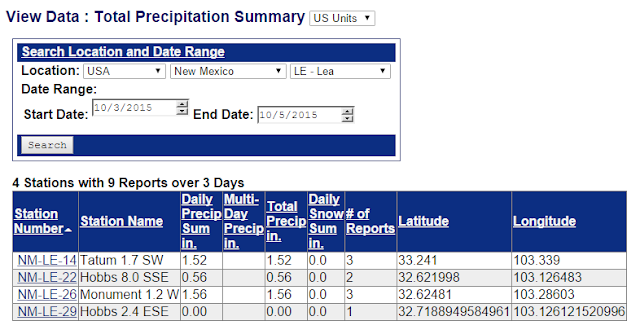 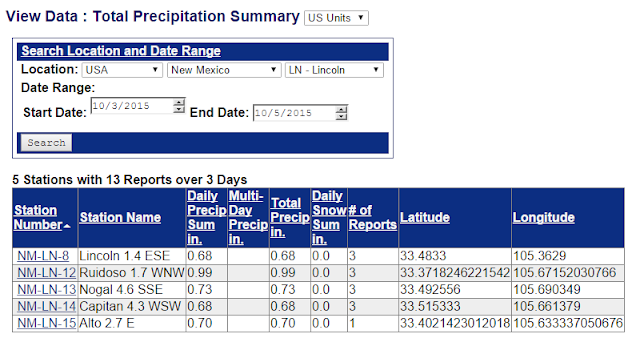 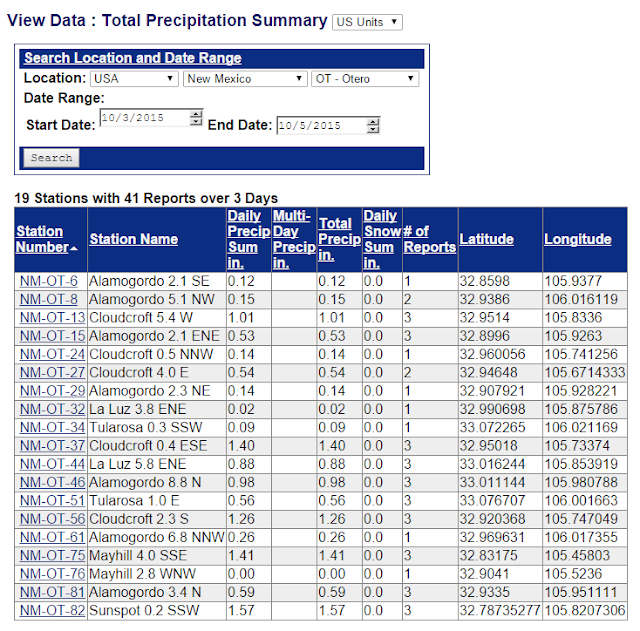 NWS MesoNet Reported Rainfall Totals.
As Of 9 AM MDT This Morning. 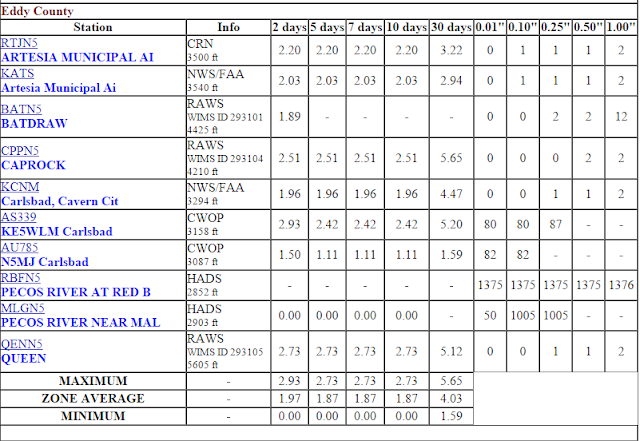 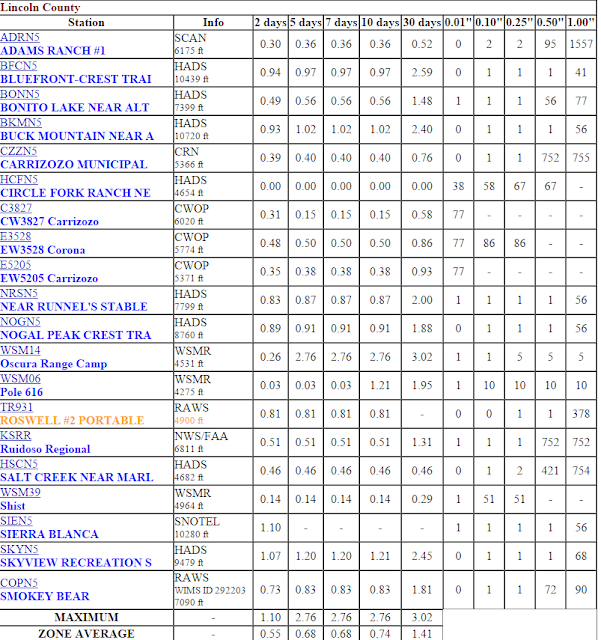 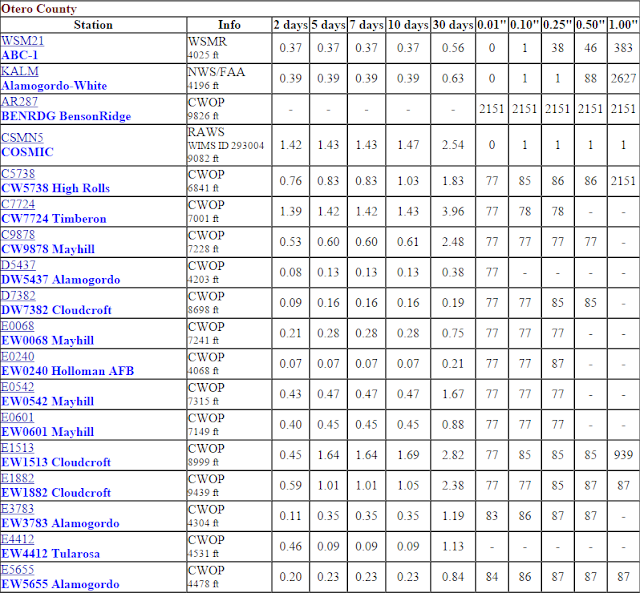 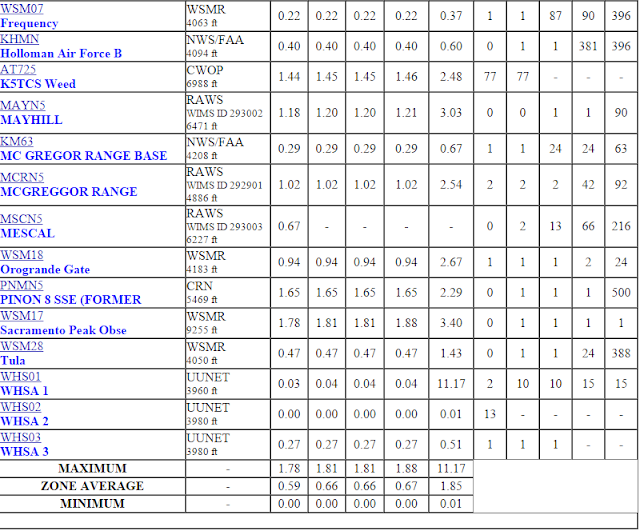 As of  8 AM MDT this morning I had recorded another .89" in the past 24-hours here at our home in NW Carlsbad, New Mexico. This brings my two day storm total to 3.10" which is also my current October total, and my year-to-date total to 17.58".

Much of southeastern New Mexico has now received a two day storm total of 1" - 3" of rain. Radar indicates that a few spots may have exceeded 4". 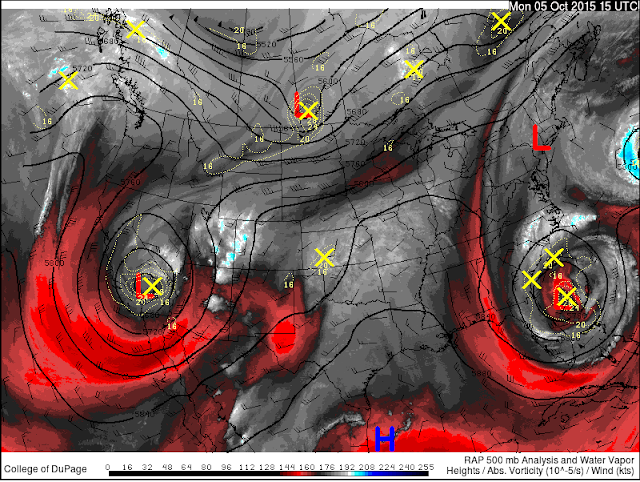 The orange shaded colors indicate that drier air from the southwest is moving into the local area at the mid-upper levels of the atmosphere in the southwesterly flow aloft. Hence an end to our rains later today into Tuesday. That won't last. 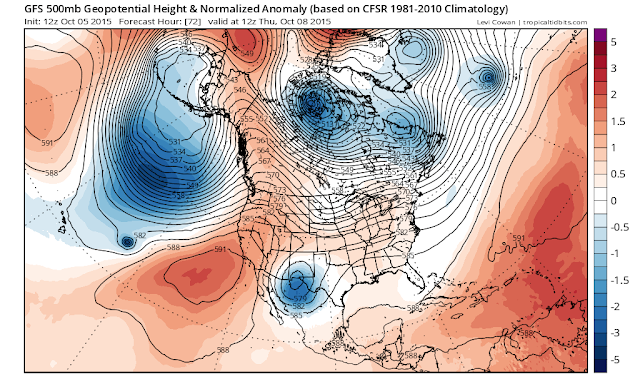 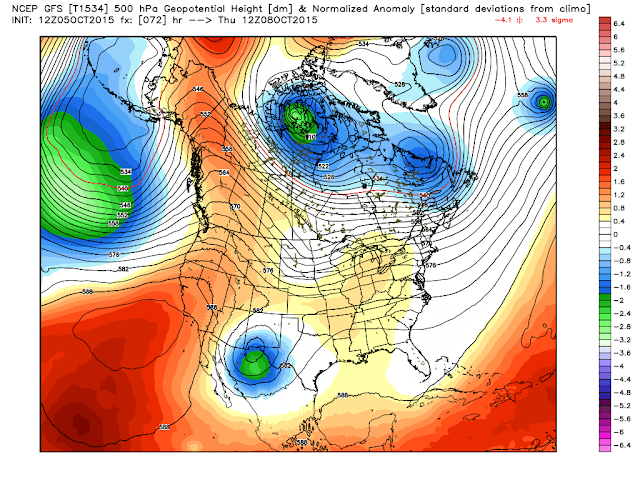 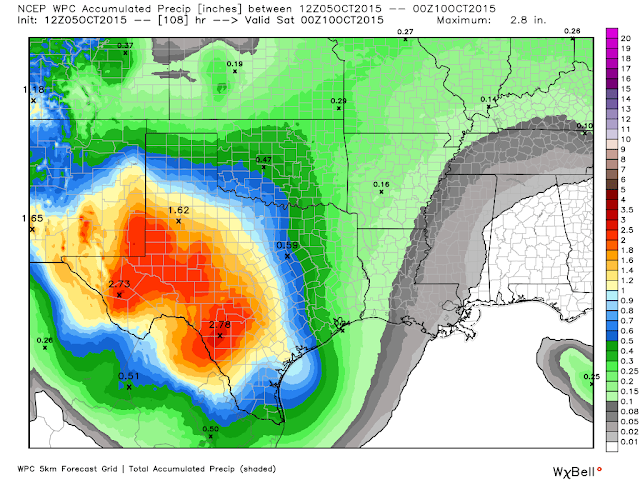 Rain should taper off later today in southeastern New Mexico with a clearing and drying trend Tuesday. Highs today will be in the 60's with the 70's forecast for Tuesday and Wednesday.

Our mid-upper level storm is currently located over central California this morning. Most of the models forecast this storm to move slowly to the southeast today into Thursday and stall near the local area on Thursday. Round two of thunderstorms, heavy rainfall, and local flash flood threats will begin Tuesday night and last into Friday.

Generally the models are forecasting another 1" - 3" of rainfall over southeastern New Mexico Tuesday night into Friday. This on top of the 1" to 4" that has already fallen. So I still think that we may end up with storm totals of 3" - 6" by Friday night. I won't be surprised if a few spots end up with more.

The flash flood threat will be much higher Tuesday night into Friday as heavy rains fall upon soils that already saturated from the rains the past two days.

The Truth Is Stranger Than Fiction!
on October 05, 2015
Posted by Wendell Malone