When The Sun Goes Quiet What Happens To Our Planet? - Upheaval! 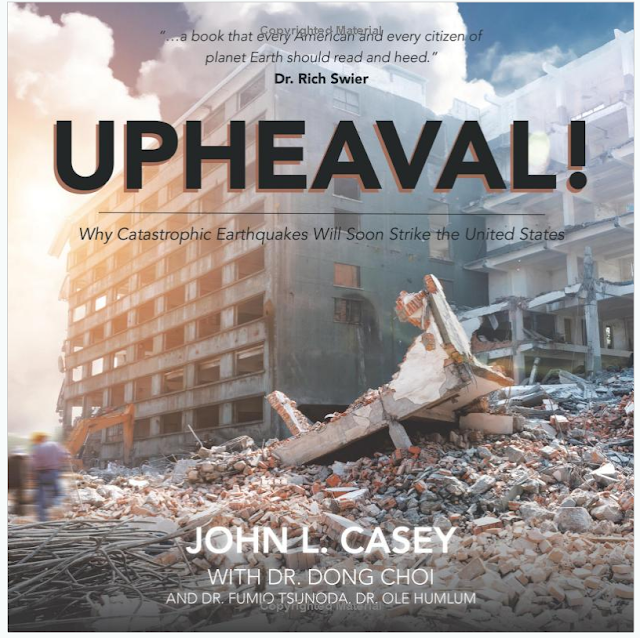 Upheaval!: Why Catastrophic Earthquakes Will Soon Strike The United States.

Reading has always been a passion of mine especially when it comes to weather and climate. John Casey's latest book indeed looks intriguing and I have it on order. In this book he describes in detail the coming effects of the Sun's decline into a Solar Minimum, and specifically its effects on the United States.

Few people realize that when the Sun enters a Solar Minimum its effects upon the planet can be and often are just as extreme as during a period of Solar Maximum activity. Mr. Casey discusses this in his latest book and focuses in on extreme earthquake activity directly related to a "quiet sun".

We are all familiar with the New Madrid earthquakes of 1811 and 1812. But few realize that these devastating earthquakes occurred during the Dalton Solar Minimum. As terrifying as those earthquakes were at the time we may be facing a much far worse event in our near future according to Mr. Casey and others. 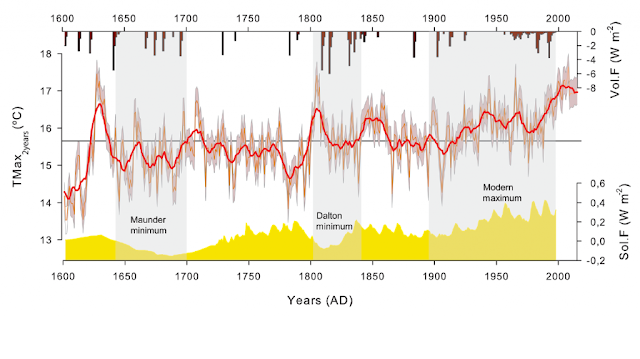 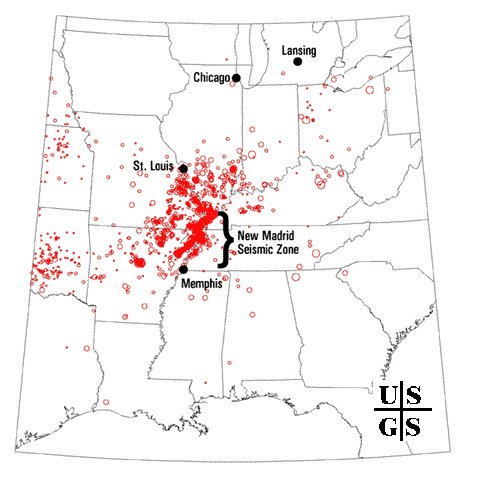 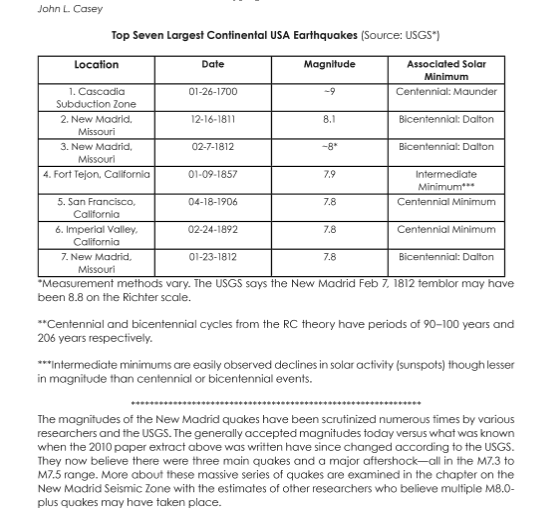 Mr. Casey describes in his latest book the coming devastation to not only those directly living in the the New Madrid and California fault zones, but also to the nation's economy and infrastructure. Trying to imagine just how much destruction would occur should a repeat of history take place is difficult to do to say the least! Yet you will not find anything concerning this possibility and in all likelihood a real probability in today's Mainstream Media Headlines.

What we continue to hear about just about every single day is their false narrative and propaganda agenda concerning "Climate Change" and how Industrialized nations of the World (chiefly Europe and the West) are destroying the planet and its climate. Which is nothing short of the biggest lie precalculated upon modern day mankind. While the real truth which is that the sun is fixing to wreck havoc on the planet over the next 25 to 75 years is being ignored. This as it continues its spiral downward into a deep slumber perhaps another Dalton or Maunder Solar Minimum.

Many reputable meteorologists, climatologists, and solar physicists believe that we have already started this plunge or that we are on the edge of the clift. Listen to Mr. Casey's interview with "True News" about his new book via this link.

Cosmic-solar radiation as the cause of earthquakes and volcanic eruptions.

In the last a few decades research papers started to appear in the scientific press that clearly show correlation between cosmic-solar radiations and destructive geological events like earthquakes & volcanic eruptions. These research papers are supported by statistical evidence that go back hundreds of years.

During solar minimum high energy cosmic radiation can penetrate to a very deep distance below the Earth’s surface, in some case a few hundred kilometers. This is the reason why most if not all earthquakes during solar minimum are deep earthquakes. The stress on the Magnetosphere during solar minimum is higher because the Heliosphere is weaker and more high energy charged particles can penetrate the solar system. On the average, the flux of cosmic rays is 20% higher during solar minimum. But, if the Sun, is in its highest position in the galaxy-which is also the time when the Earth would be in its final phase of magnetic field reversal-then the impact of cosmic radiation on both the Heliosphere and Magnetosphere is higher even during solar maximum. At that position the Heliosphere is at its weakest state due to a very intense bombardment from high energy radiations.
Nevertheless, the relationship between the lowest-highest solar cycles and earthquake-volcanic eruption, is supported by an overwhelming evidence. Statistical data show strong correlation between major volcanic activity (based on cubic kilometers of ejected matter), major earthquakes of 8.0 magnitude or more (on Richter scale) and strong solar minimum (grand minimums).
In the last two and half centuries the following major volcanic eruptions occurred during strong solar minimum (Grand minimums): Grimvotn (Iceland) 1783/84 (14 km3), Tambora (Indonesia) 1810 (150 km3), Krakatoa 1883 (5.0 km3), Santa Maria (Guatemala) 1902 (4.8 km3), Novarupta (Alaska) 1912 (3.4 km3). The only major eruption to occur during a solar maximum was Pinatabo (Philippines) 1991 (between 6 and 16 km3).
A similar correlation was also found for earthquakes. All major earthquakes occurred during strong solar minimums or grand minimums. For instance, after solar activity declined significantly between 2004-2010. There were 11 major earthquakes over 8.0 magnitude. Solomon Islands -8.1(April 2004), Sumatra-Andaman&Indian Ocean tsunami- 9.2 (December 2004), Nias (Indonesia) -8.6 (March 2005), Tonga- 8.0 (May 2006), Kiril Islands (Russia) twice- 8.1 (November 2006 &January 2007), Peru-8.0 (August 2007),  Sumatra-8.5 (September 2007), Samoa-8.1 (September 2009), Maule (Chile)-8.8 (February 2010).
The bottom line is that all earthquakes and volcanic eruptions-big or small- are triggered by an external pressure induced on Earth’s magnetic field. Strong Coronal Mass Ejection Flare directed at Earth can exert pressure, that deform and shrink the Magnetosphere by as much as 4 Earth Radius (4Re). But, the pressure would affect or impact the layers of Earth below its surface in different ways. It depends on the tectonic of each region. In some regions the tension would cause energy to be released in a form of earthquake, while in others it would be in a form of volcanic eruption.
The Truth Is Stranger Than Fiction!
at Saturday, April 01, 2017