Is New Mexico Is Due For A Strong Tornado?

In this image we see that the Supercell Thunderstorm has just passed to the north of the city of Clovis and radar is showing the hook echo approaching the intersection of Carolina Street and Southland Drive 2 miles due south of the city.

This is the same image as is shown above just zoomed in.

Here we see that the base velocity image at 7:54 PM MDT depicts inbound and outbound winds (relative to the radar) are at 97 knots or 112 mph.

Here we see that the base velocity image at 7:54 PM MDT depicts inbound and outbound winds (relative to the radar) are at 97 knots or 112 mph.

This image shows the tightening couplet of the rotation within the storm at 7:54 PM MDT.

On average 10 tornadoes touch down in New Mexico every year. Most of them occur in the spring and across the eastern one third of the state. Most of these are of the relatively weak EF0 (40 to 73 mph winds) to EF1 (74 to 113 mph winds) category. On average according to National Weather Service Statics about every 10 years an tornado of EF2 (114 to 158 mph) magnitude strikes the state. And more often than not when this happens there are injuries and sometimes deaths associated with them. It has been 10 years since the Clovis EF2 Tornado that killed two people, injured 35, and damaged 500 homes and businesses. The tornado was 350 yards wide and was on the ground for 8.02 miles before lifting. This tornado also killed some 190 dairy cattle. 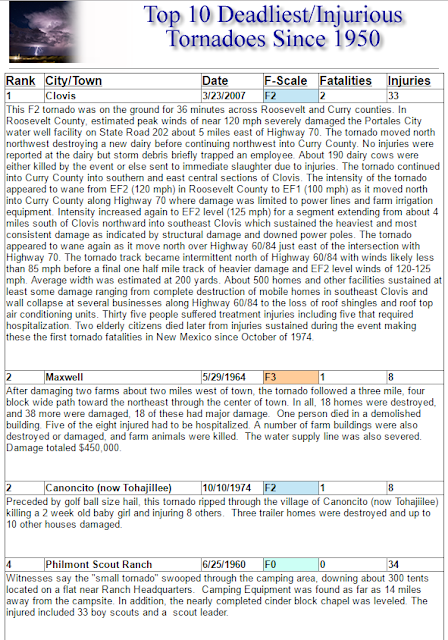 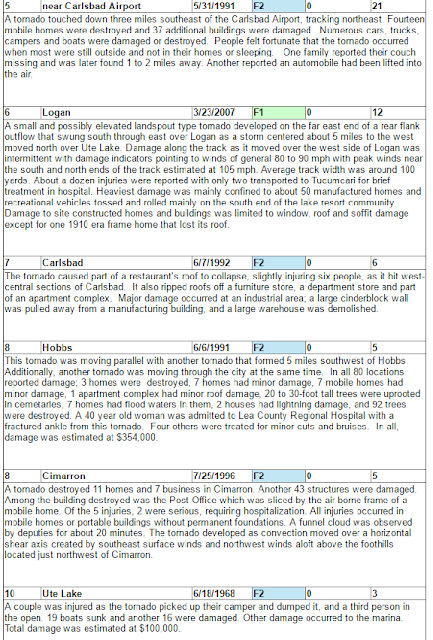 We are due folks. So now is the time to review your safety plans and prepare your family and loved ones. I suspect that our severe weather season this spring will be very active and above normal.