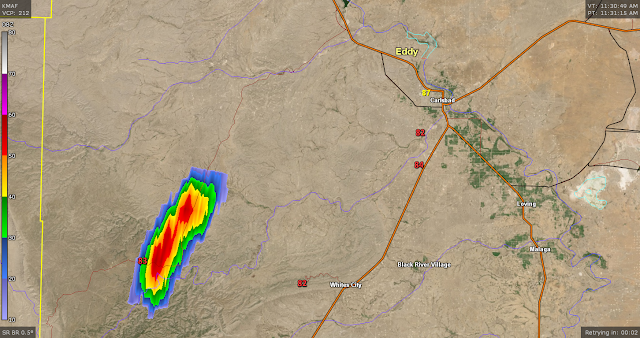 Right on cue thunderstorms are already developing near Queen in the Guadalupe mountains. As of 11:30 AM this morning my temperature here at the house in Carlsbad was 88ºF with a dew point temperature of 63ºF producing a relative humidity value of 43%. Additional thunderstorm development is forecast area-wide this afternoon into tonight. 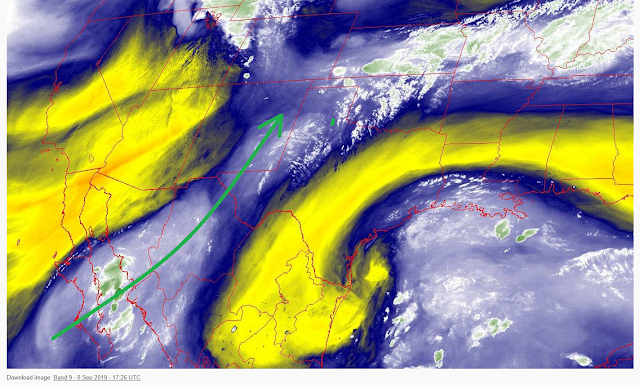 Captured At 11:26 AM MDT This Sunday Morning.

Not only do we have plenty of low-level moisture in place but a stream of subtropical mid-level moisture (as depicted by the lighter white and green shades) is streaming northeastward into the state from the southern tip of Baja, California. So the stage is set for scattered rain showers and thunderstorms to continue developing into Wednesday.

Pattern Change Underway In The Mid-Upper Levels Of The Atmosphere. 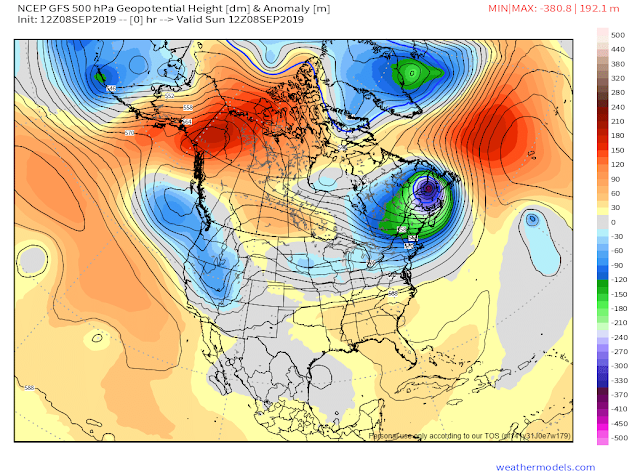 Valid At 6 AM MDT This Sunday Morning. 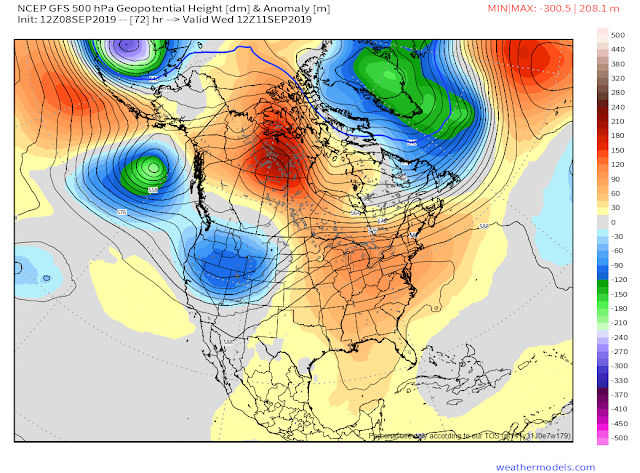 Valid At 6 AM MDT Next Wednesday Morning.

A deepening trough of low pressure at the mid and upper levels of the atmosphere continues to dig southward from the Gulf of Alaska into northwestern Arizona this morning. This indicates that the ridge of high pressure that has dominated our summer weather is showing signs of breaking down and moving eastward. This will continue into Friday of next week when the trough pulls away to our north and swings across the northern plains states.

Cooling Down With Increasing Chances Of Rain. 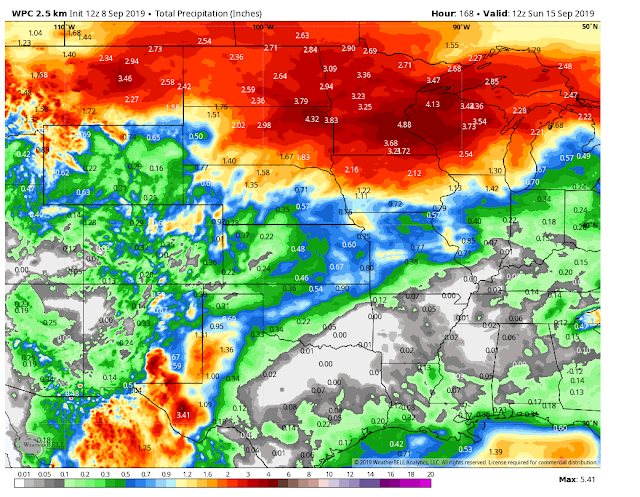 This mornings WPC model forecast calls for heavy rains over the Guadalupe and Sacramento mountains today into next week as well as over parts of the Southeastern Plains. Storm totals by next weekend could be in the 2" to 5" range. 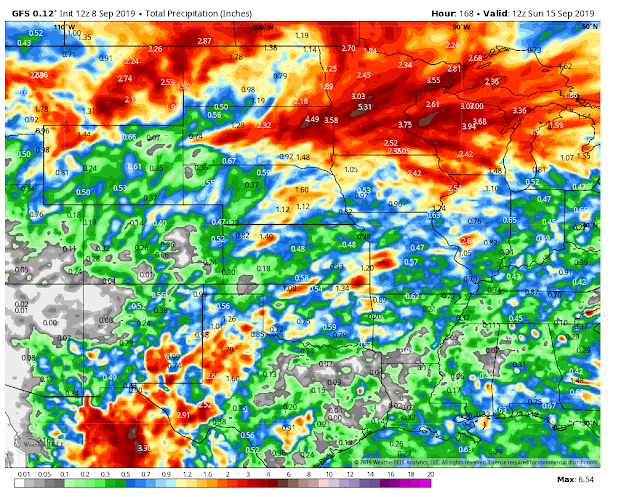 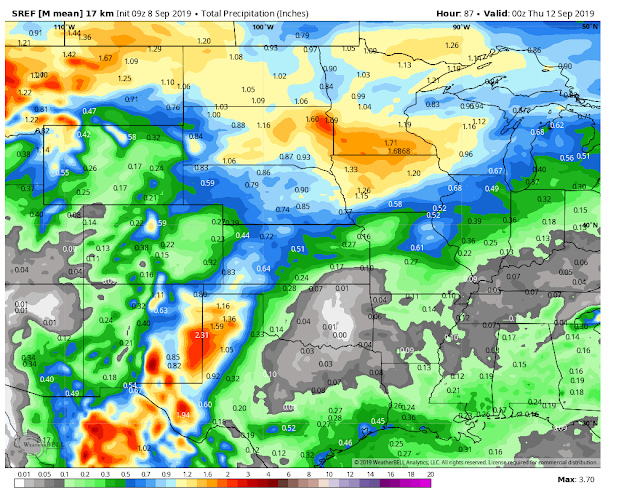 Both the GFS and SREF models agree with forecast rainfall totals between today and mid to late next week. Use these model forecasts as a guide only since rarely does it rain that much in the spots indicated. Overall the thought is that there is the potential for heavy rains to fall over the local area today into next week. By Wednesday we may be looking at some totals of between 2" and 5". This isn't hard to believe considering that thunderstorms dumped anywhere from an inch to nearly two inches of rain over parts of the Sacramento mountains yesterday afternoon and overnight.

Localized flash flooding is a concern from this afternoon into next week. Thunderstorms will have the potential to produce heavy rainfall rates of up to two inches per hour at time if not more in a few spots. Generally speaking the threshold for flash flooding to develop locally is when rainfall falls at the rate of around two inches per hour. And repeated thunderstorm activity over the same locals over the next week will also pose a flash flood threat in some areas...especially if heavy rains fall on multiple occasions of the same spots.
Training thunderstorms could also produced localized flash flooding at times.

A Personal Weather Station (PWS) reported a 24-hour total of 1.86" of rain northwest of Mayhill this morning from yesterday afternoon thunderstorms and overnight storms.

Reported And Radar/Satellite Estimated 24-Hour Rainfall Totals.
(As Of 9 AM MDT This Sunday Morning). 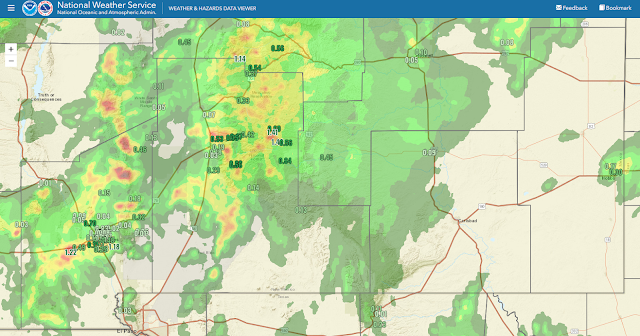 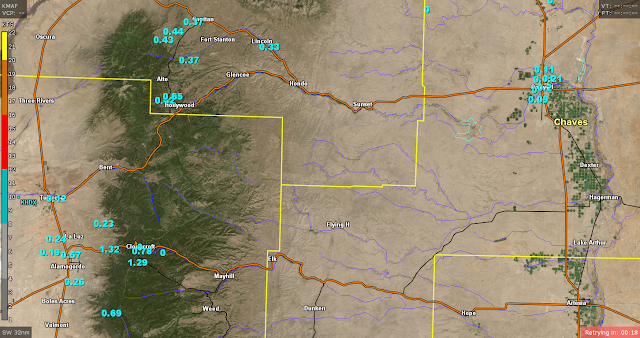