A Taste Of Winter For Some Of Us - Fall For The Rest Of Us. 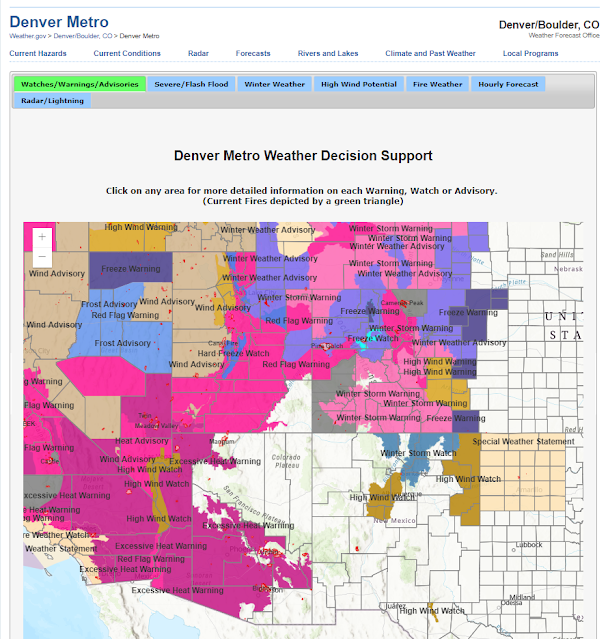 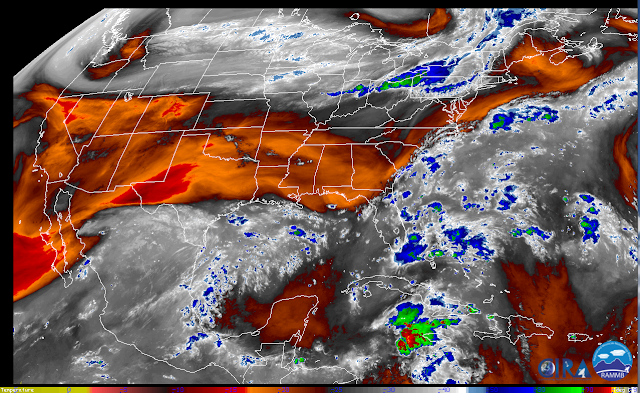 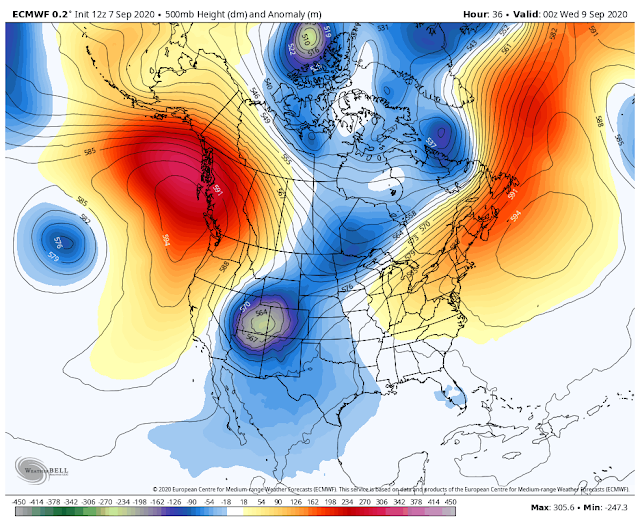 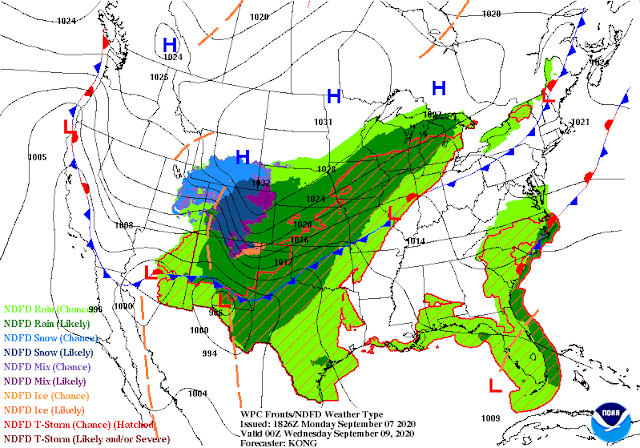 Looking at the Western U.S. watches and warnings that are in effect as of noon today reminds me of a winter day, not the 7th of September. New Mexico has a Winter Storm Watch in effect for the northern Mountains and the northeastern Plains. This is extremely rare for so early in the Fall. Depending upon the track and timing of the Cutoff mid-upper level low forecast to park itself near the Four Corners the snow could end up being more widespread than currently forecast.
A powerful and unusually cold mid-upper level trough of low pressure will continue to carve out a trough over the Western U.S. today into tonight. By sunrise Tuesday morning a closed low is forecast by the models to form over Utah. It is then forecast to wobble around the Four Corners area through Thursday before lifting northeastward into Colorado.
Meanwhile, at the surface a very strong arctic cold front will enter Northeastern New Mexico between midnight tonight and sunrise Tuesday morning. A much colder air mass will plow southward into the Eastern Plains on Tuesday behind the front. How cold is cold? Denver is forecast to reach 91º today but only 34º on Tuesday! They currently are under a Winter Weather Advisory from midnight tonight through noon Wednesday. Tree and other vegetation damage is forecast from the heavy wet snow and the 50 mph wind gusts.
Strong north to northeasterly winds sustained at around 30-40 mph with gusts to around 50 mph are forecast to accompany the front passage when it moves into the Southeastern Plains Tuesday afternoon and evening. Scattered thunderstorms are also forecast to develop ahead of and along the frontal boundary as it surges westward and southward into the local area. A few of these may even become severe and produce hail and stronger winds gusts than 60 mph.
Areas of blowing dust (possibly another Haboob) will occur along and behind the cold front as it backdoors into the region. Sudden drops in the visibility (possibly down to near zero in some spots) will be possible with the stronger wind gusts and especially with any thunderstorm that develops ahead of, along, and just behind the front.
Drastic Changes In Temperatures.
RTMA Temperatures. 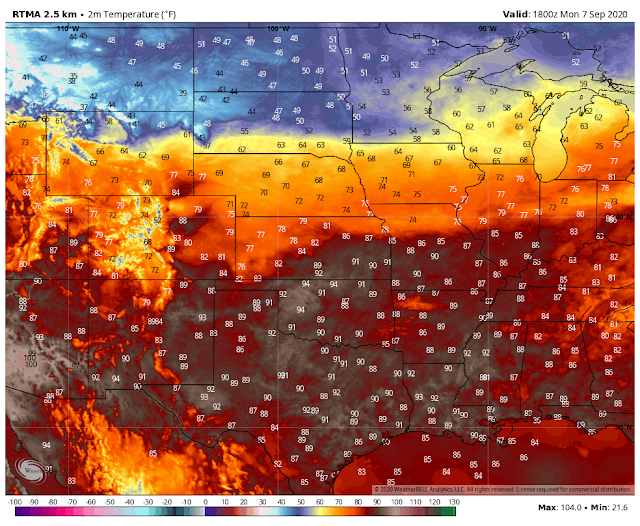 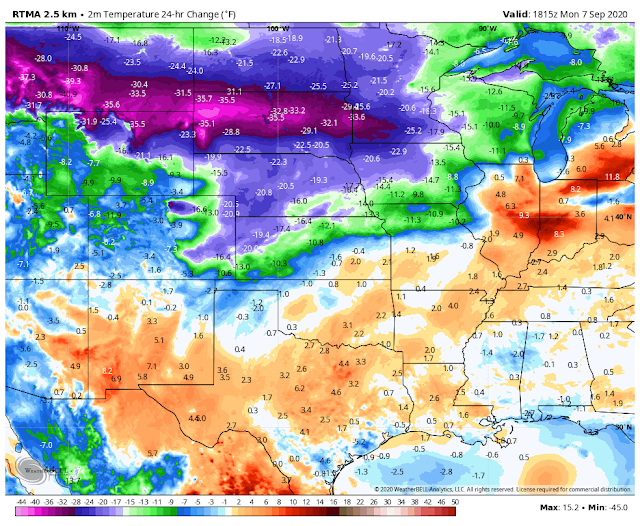 As Of Noon MDT Labor Day.
As of Noon MDT, today temperatures across the northern Plains were only in the 40's which is a temperature drop of some 30º to 40º compared to 24-hours ago. The same type of temperature plunge will accompany the arctic frontal passage Tuesday afternoon and evening when it arrives in Southeastern New Mexico.
NWS NDFD Forecast High Temperatures.
Today - Labor Day. 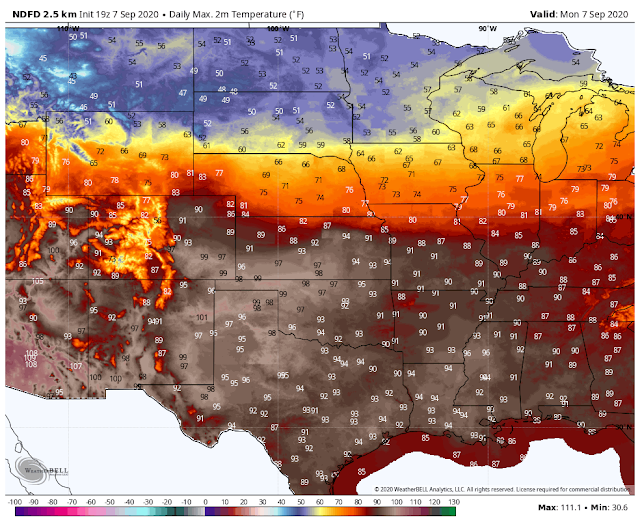 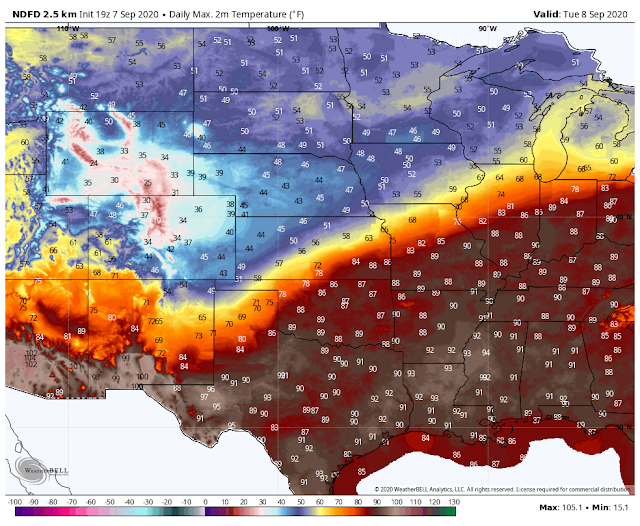 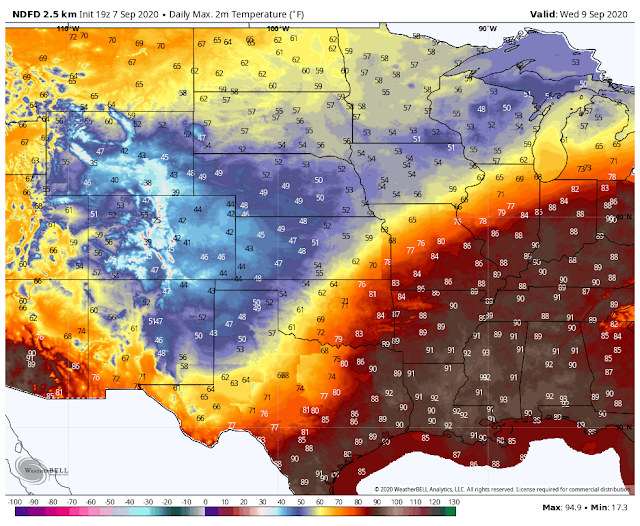 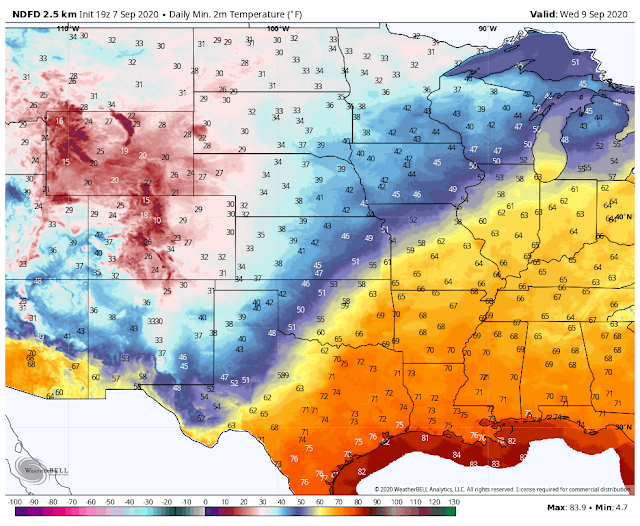 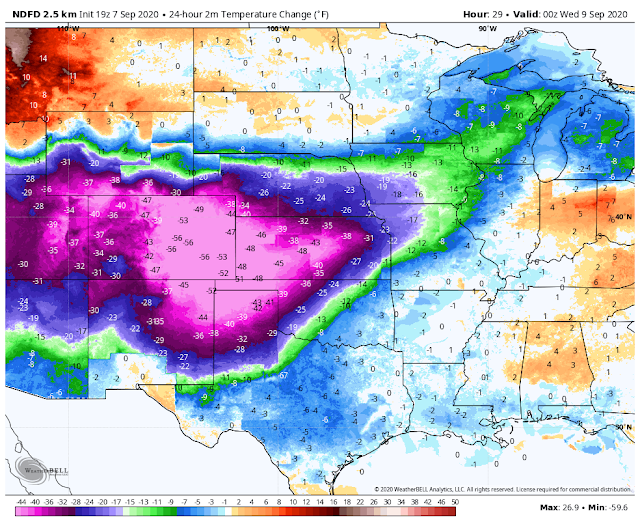 Valid At 6 PM MDT Tuesday, Sept 8, 2020.
Drastic drops in our temperatures are forecast to occur along and behind the cold front as it plows through the area Tuesday afternoon and evening. Temperatures will fall some 40º to nearly 55º colder than compared to Labor Day's temperatures. Absolutely incredible in the winter but almost unheard of this early in the fall.
Locally across the Southeastern Plains, we are expected to top out today near 100º. By sunset Tuesday evening behind the frontal passage our temperatures are forecast to fall down into the 40's and 50's. There's that 40º to 50º degree temperature drop. Current forecasts call for highs locally on Tuesday in the 80's to 90's. Maybe a little higher or maybe even colder if the cold front arrives faster than forecast.
New daily record low high temperatures and new daily record low temperatures are expected to occur Wednesday and maybe Thursday across the local area.
Should the cutoff now to our northwest dig further south then we will end up being colder longer than what is currently forecast. Overcast skies along with rain will also contribute to this factor.
NWS NDFD Snowfall Forecast. 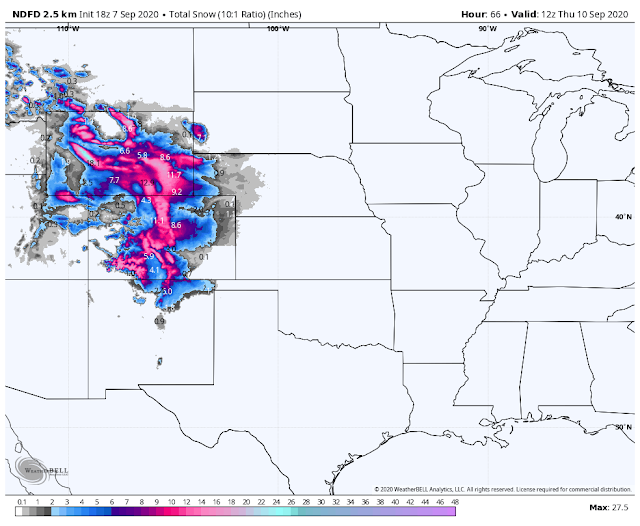 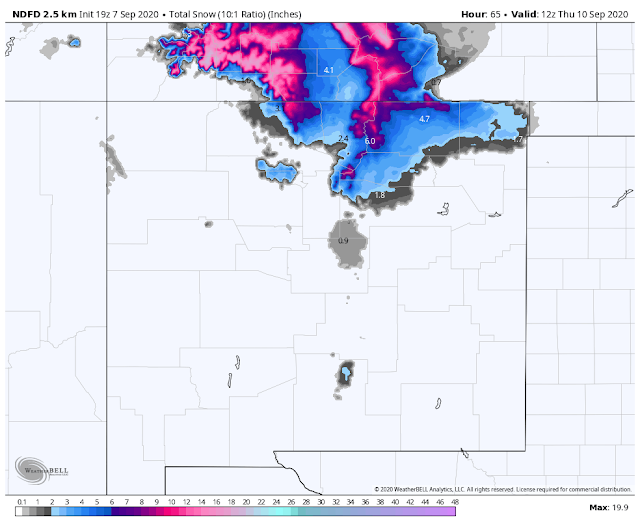 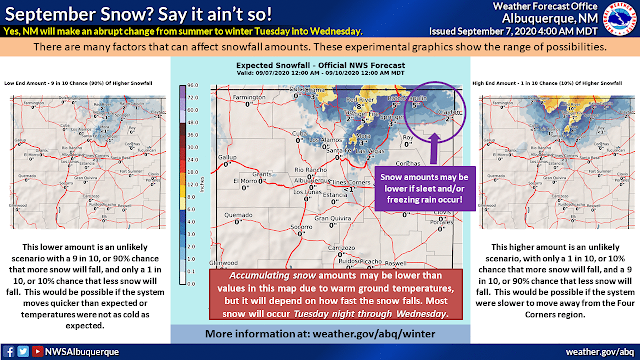 Winter Storm Watches are out for the northern Mountains and parts of the northeastern Plains of New Mexico for heavy snow. Effective from Tuesday evening through Wednesday afternoon. Simply crazy to see this occur this early in the fall. There remains a great deal of uncertainty concerning how far south the snow will make it in New Mexico and how low the snow levels will drop down to.
Current thinking is that a couple inches of snow will fall over the higher elevations of the Sacramento Mountains generally above 8,000'. This would mean that the Cloudcroft, Sunspot, and Ski Apache areas may see a little bit of accumulating snow. Cloudcroft is looking at a high temp today and Tuesday in the upper 70's ahead of the cold front. Tuesday night temperatures are forecast to fall down to the low-mid 30's with a high Wednesday in the upper 40's to near 50.
Every winter we face the same forecasting dilemma with the forecast models and closed and or cutoff lows. How far south and west do they dig and for how long. Such will be the case with this one too. The further south it wobbles or digs will increase the state's chances for seeing more widespread snow and at lower elevations. So expect some possible changes in the indicated forecasts.
Searching through the local Climatology records for Cloudcroft the earliest I can find that measurable snow has fallen in the fall is on September 20th, 1949 when a trace was recorded. On September 25th, 1913 they recorded 1.0", and 3.0" on the 26th. On September 28th, 1936 they recorded 7.0".
How Much Rain For How Long? 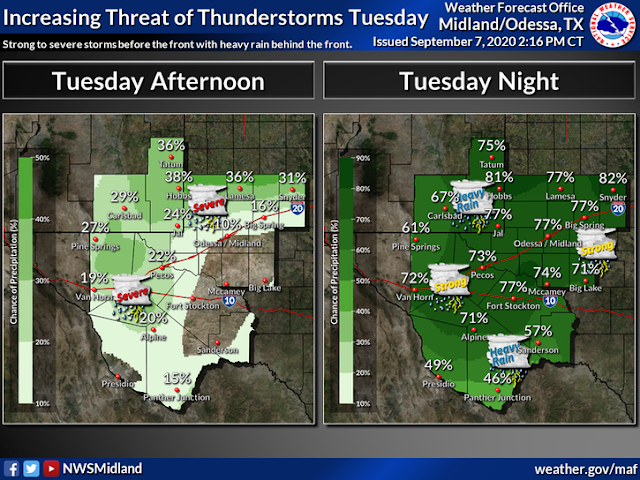 Strong to severe thunderstorms will be possible along and ahead of our cold front arriving Tuesday evening. Heavy rain will be possible with any storms, including the time behind the frontal boundary.
ECMWF Rainfall Forecast. 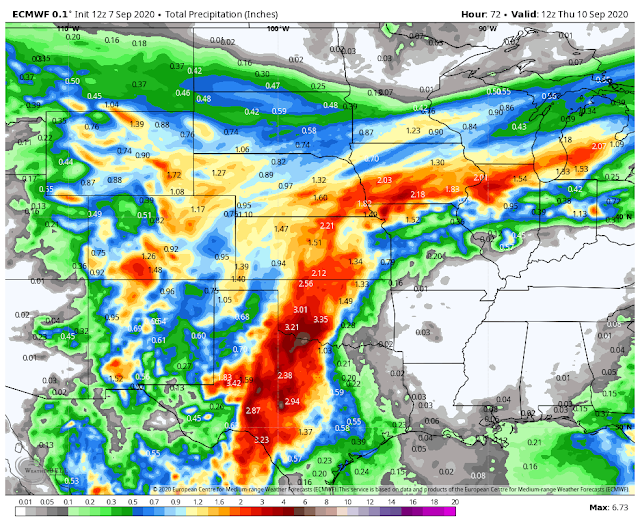 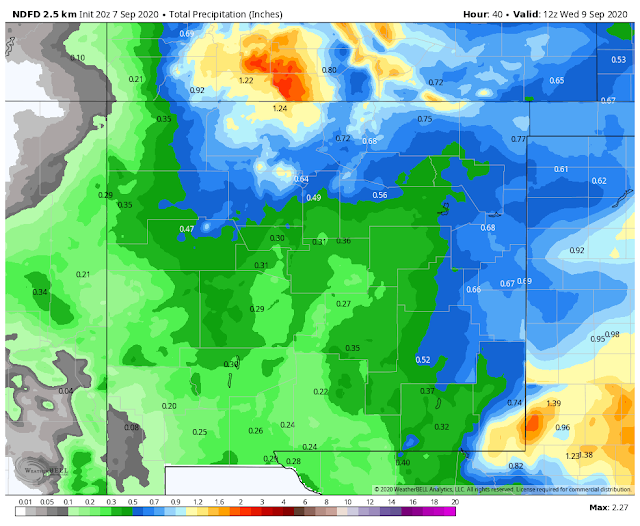 Valid At 6 AM MD Wednesday. 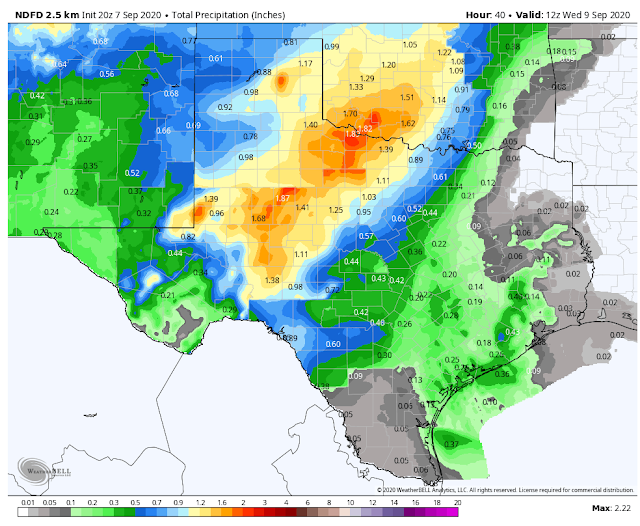 Valid At 6 AM MD Wednesday.

Locally heavy rains associated with the thunderstorms that fire up ahead of, along, and just behind the cold front Tuesday afternoon are expected across the area. Localized flash flooding may also be possible with some of the stronger thunderstorms and heavier rains. Behind the frontal boundary, a steady cold rain is forecast Tuesday night into Wednesday. Local rainfall totals could be as high as 1" to 3".