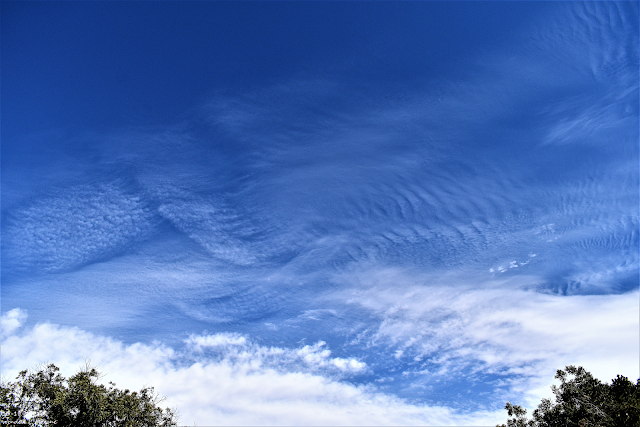 Cirrocumulus is one of the three main genus-types of high-altitude tropospheric clouds, the other two being cirrus and cirrostratus.[3] They usually occur at an altitude of 5 to 12 km (16,000 to 39,000 ft). Like lower-altitude cumuliform and stratocumuliform clouds, cirrocumulus signifies convection. Unlike other high-altitude tropospheric clouds like cirrus and cirrostratus, cirrocumulus includes a small amount of liquid water droplets, although these are in a supercooled state. Ice crystals are the predominant component, and typically, the ice crystals cause the supercooled water drops in the cloud to rapidly freeze, transforming the cirrocumulus into cirrostratus. This process can also produce precipitation in the form of a virga consisting of ice or snow. Thus, cirrocumulus clouds are usually short-lived.[4] They usually only form as part of a short-lived transitional phase within an area of cirrus clouds and can also form briefly as a result of the breaking up of part of a cumulonimbus anvil.
Near Record Heat Monday - Windy Tuesday.
GFS 500 Millibar (18,000') Analysis. 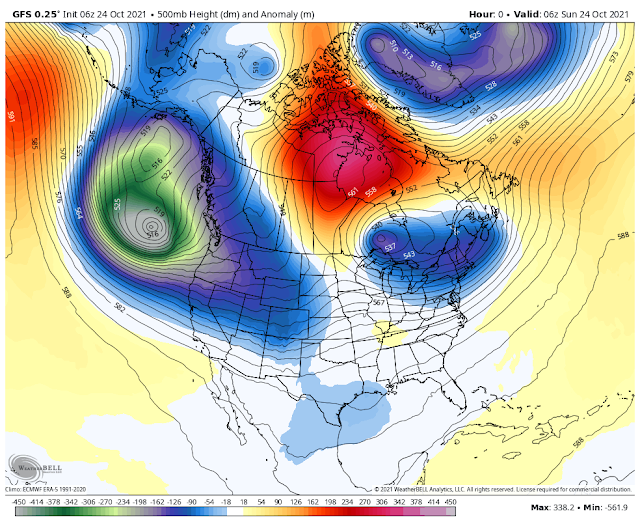 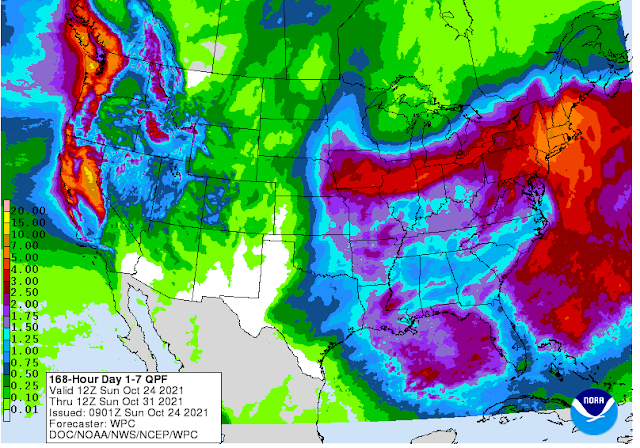 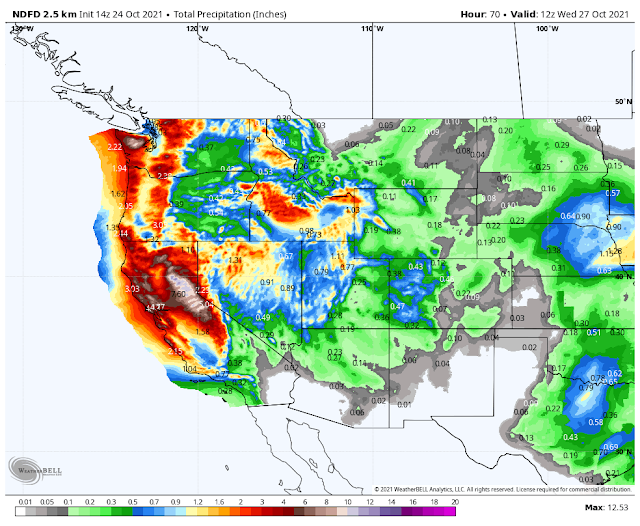 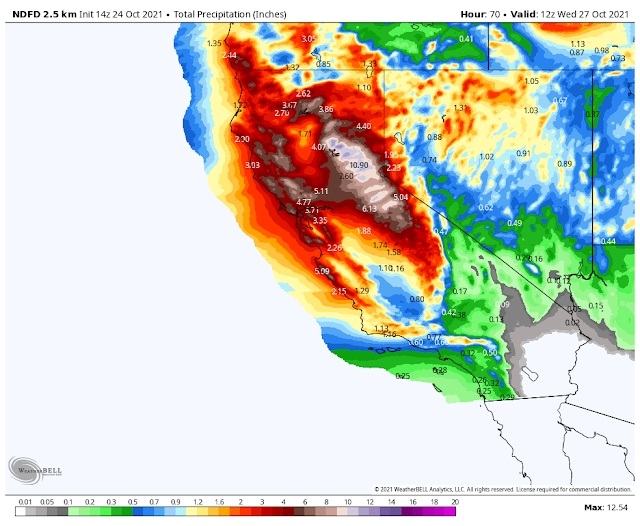 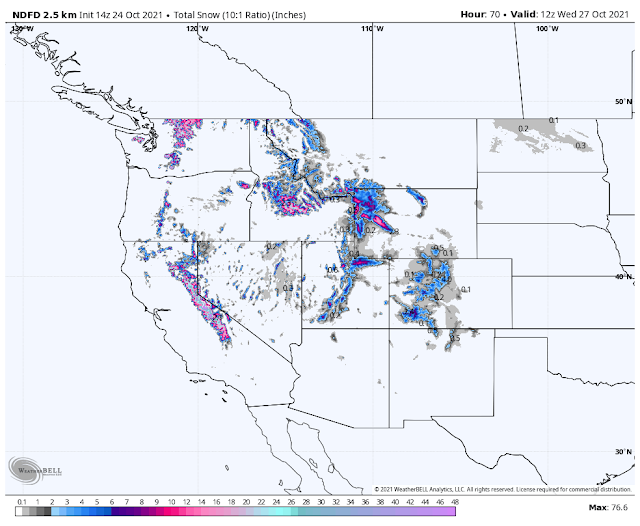 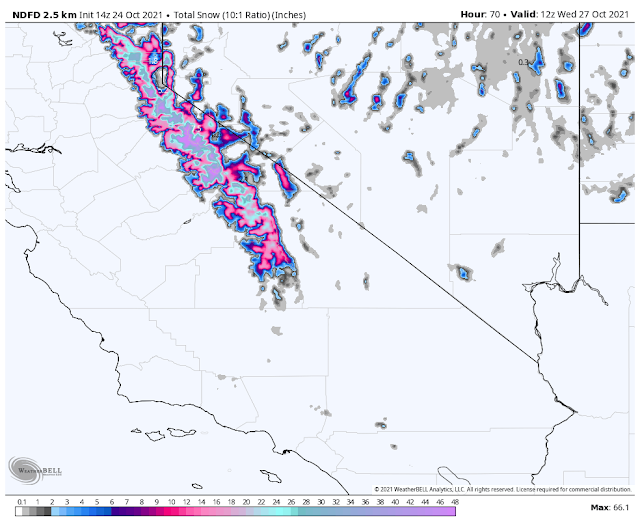 A very deep and unusually strong series of mid-upper level closed lows have been and will continue bringing record rainfall and snowfall to parts of the Pacific Northwest and California. Rainfall totals by the middle of this week in parts of northern California are forecast to be around a foot or more. Snowfall totals in the Sierra Nevada mountains will approach 6 feet. Highly unusual to see this strong of a storm this early in the fall. More likely to see this in mid to late winter.
With a moderate La Nina event developing over the Pacific it will be interesting to see what unfolds for our winter here in the Desert Southwest and New Mexico. Typically we get left high and dry precipitation-wise with La Nina winters, but not every La Nina produces the same conditions. If this pattern of the northern storm track holds for the upcoming winter then we can expect to see a windy, dry, and dusty winter locally. Not to say that there won't be bouts of cold air invasions from the arctic. But the jury isn't out on this yet...too early I think to know for sure.
GFS 500 Millibar (18,000') Forecast. 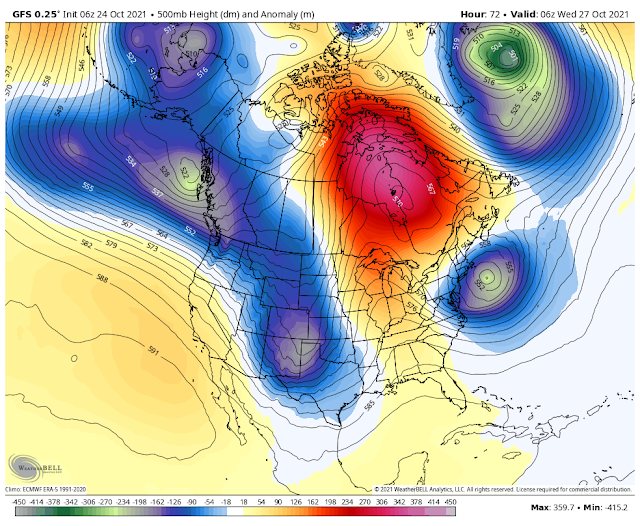 Valid At Midnight Tuesday.
As this storm moves southeast this week it will form a longwave trough of low pressure and a piece of this will break off and dive southeast into New Mexico Monday into Tuesday. Once again this incoming storm will take the northern route as it crosses the state. By around midnight Tuesday night, it currently is forecast to be centered in northeastern New Mexico. Current model forecasts call for windy and dusty conditions locally Tuesday with light rain showers and snow showers across northwestern and northern New Mexico. Snow levels will be high and around 9,000'.
NWS Surface Map Forecast. 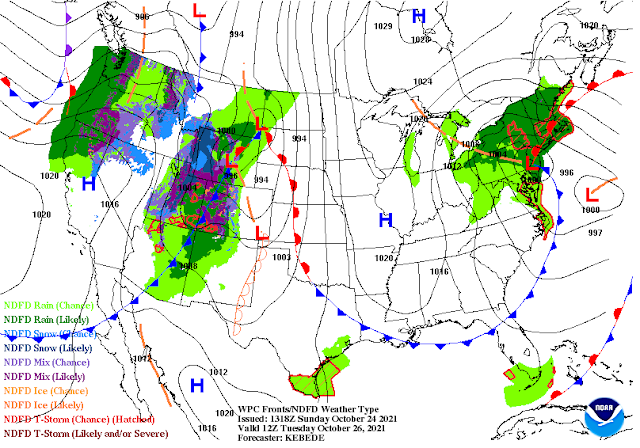 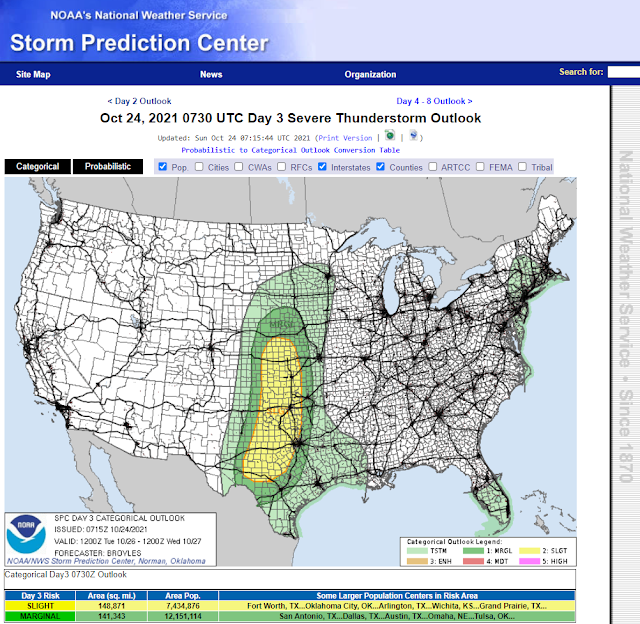 Return flow (low-level southerly and southeasterly upslope flow) from the Gulf of Mexico will help set the stage for severe thunderstorms to develop along and east of the dryline and approaching Pacific cold front Tuesday afternoon into Tuesday night from central Texas northward into southern Nebraska.
NWS NDFD Forecast High Temperatures.
Today. 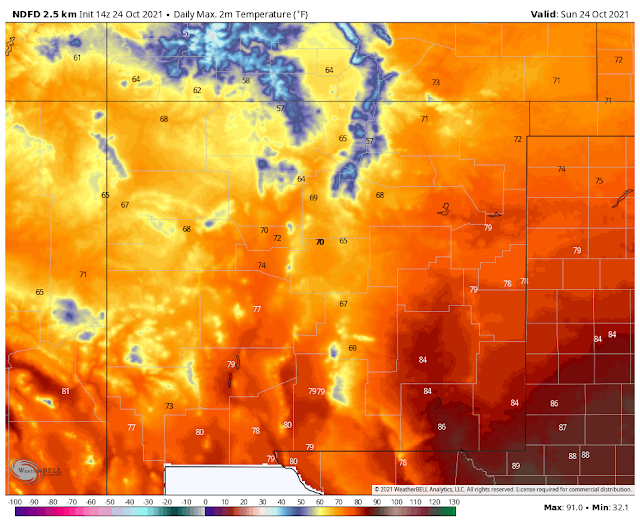 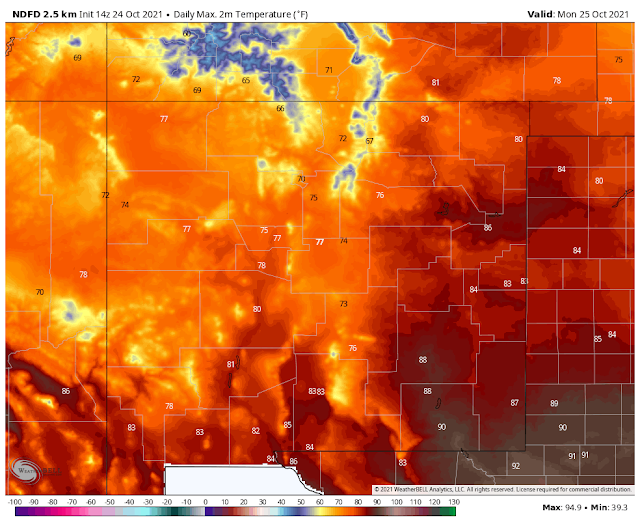 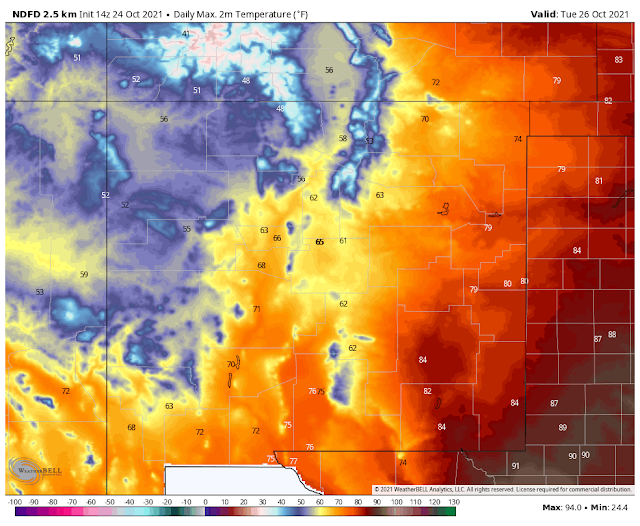 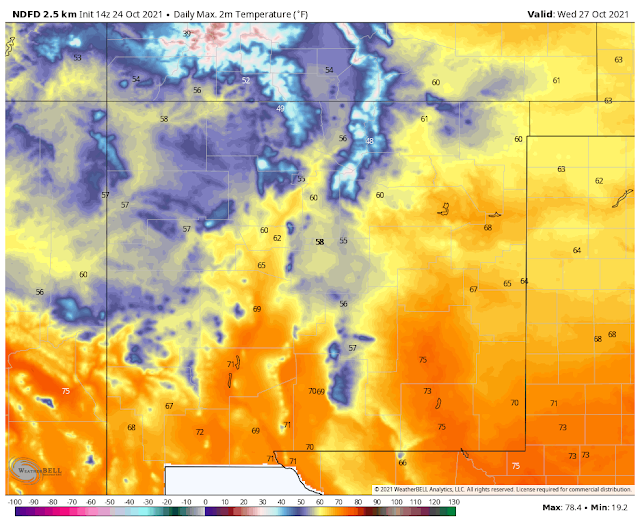 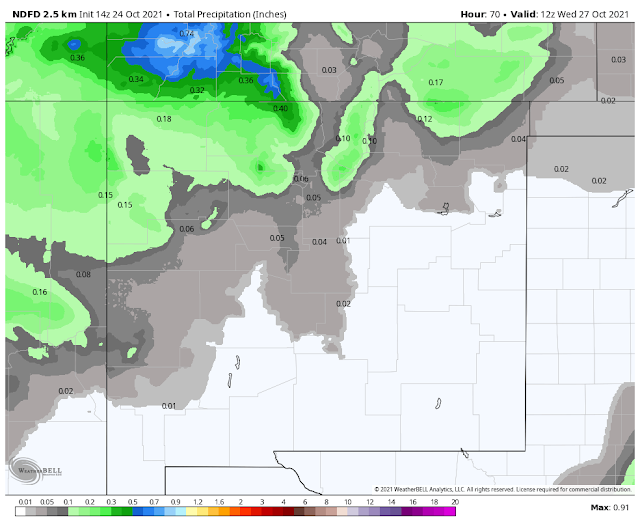 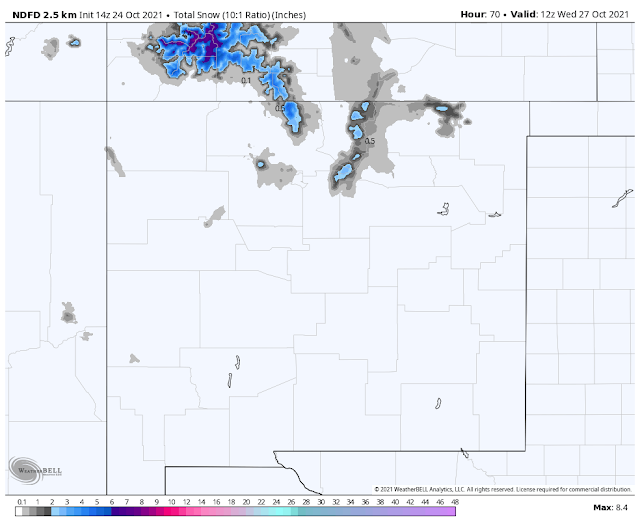 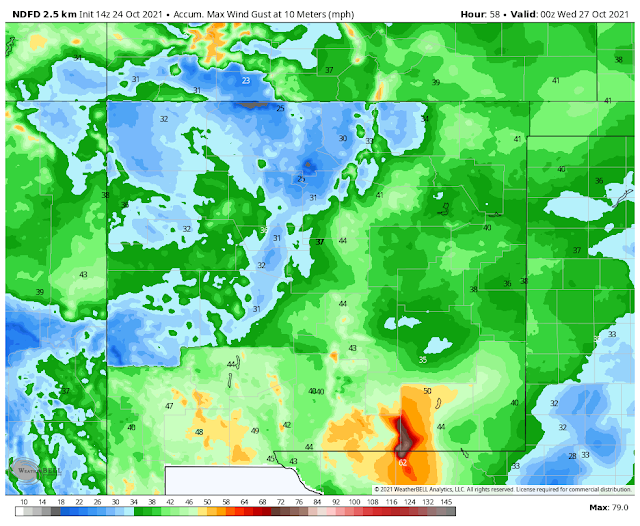 Here in Southeastern New Mexico near-record to record heat is forecast Monday afternoon as our high temperatures approach 90º. Windy and dusty conditions are forecast for Tuesday into Tuesday evening as the front approaches and then pushes east of the region. Southwesterly to westerly winds may gust up to 50 mph or higher across the plains and valleys. Then shift around to the northwest and remain strong and gusts Tuesday night. Our temperatures will cool down to slightly below normal Wednesday into Friday with a warming trend by next weekend.
The Truth Is Stranger Than Fiction!
Email Post