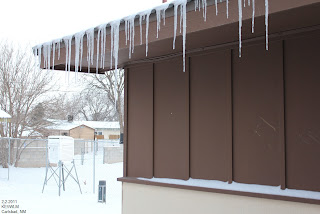 2-2-2011
KE5WLM
Carlsbad, NM
Last Cold Morning - Warming Trend On The Way.
We can expect to see a gradual warming trend commence
across the area today into the middle of next week. By Saturday we
ought to be in the 60's, and Sunday will be in the low 70's
Believe it or not but by around next Tue - Wed we may be near 80.
Some Thoughts About Our Brutal Arctic Outbreaks.
I think that a lot of us will remember the past couple of weeks for a long time to come. I can't count the number of stories I have heard about broken water pipes and related stories across SE NM. The Roswell Airport bottomed out at -11F on Friday, Feb 4, 2011. The Artesia Climate Coop Station recorded a low of -9F, the Artesia Airport -6F, the Carlsbad Airport -4F. I have been told by some of my friends that it was -11F in Hagerman, and -13F in Cottonwood just north of Artesia. These were the coldest low temperatures that we have seen in the Pecos Valley since December 1987 when it was -13F in Artesia, and Lakewood. We saw some of the coldest daytime high temperatures that we have seen since 1983, and in a few cases  some of the coldest ever recorded.
Ruidoso set a new all time record low temp of -27F on the morning of Thursday ,February 3, 2011. Dry Canyon located just east of Cloudcroft also recorded a low of -27F. Elk which is located just east of Mayhill, recorded a low of -24F. The lowest temperature locally that I have been able to find so far, was the -31F recorded at the Roswell Portable #1 Raws near Fort Stanton.
I have talked about the Pacific Ocean switching over to a Cold PDO phase before, and I want to bring this up again, because I think that we are going to see a long-range pattern change in our weather over the next 20 - 30 years. Our last Cold PDO occurred from the late 1940's through the late 1970's. Some of our worst winters here in SE NM, as well as across the rest of the state, occurred during this time frame. The state's lowest temperature was recorded at Gavilan on Feb 1, 1951 with a reading of -50F.
I think that when you combine a Cold PDO, the unusually low sunspot cycle, and the recent volcanic activity we have seen the past couple of years, then there is the potential for the next several winters to be very cold across the nation. Watch AccuWeather Meteorologist Joe Bastardi's latest video concerning this topic- "Why We Need All Energy Sources. The Facts Of The Weather."
Am I saying that every winter in SE NM will be brutally cold for the next 30 years...no, of course not. But overall I think that we will see colder winters in the coming years than what we have seen for the past  thirty years. I also think overall that our climate will be drier the next 20 -30 years than it has been for the past 30 years. We have seen some pretty stout outbreaks of arctic air impact that state this winter, especially northern New Mexico this winter, and recently southeastern New Mexico. I think that the overall trend is downward concerning our winter temperatures.This is just my own personal opinion, but I think that it bears watching.
This was just a little reminder of what some of our past winters have been like. Remember Artesia's all time record low is -35F set on Feb 8, 1933. Roswell fell to -29F on Feb 13, 1905. And don't forget about Jan 1962 when Carlsbad recorded it's all time lowest temp of -18F, Artesia was -20F, and Roswell -24F.
The Truth Is Stranger Than Fiction!
Email Post