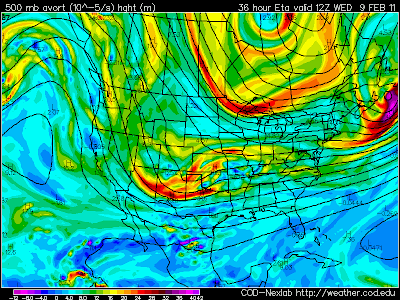 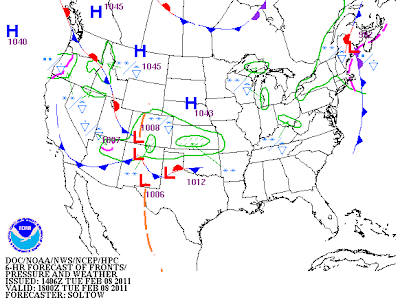 Forecast Position Of The Arctic Cold Front At 11 AM Today. 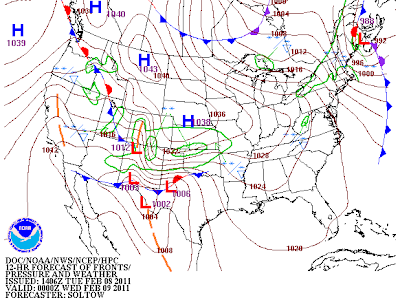 Forecast Position Of The Arctic Cold Front At 5 PM Today. 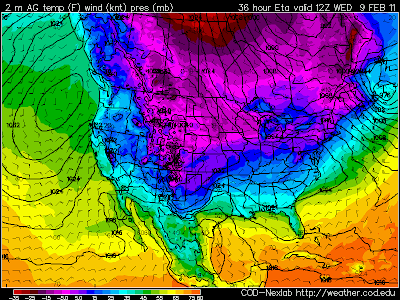 My high temp at my home here in Carlsbad, NM was 73F today.
Arctic Front arrived a few minutes ago, temp falling like a rock,
currently 64 and going down. We will be lucky to see freezing (32F)
for a high temp tomorrow. We will drop down to below freezing
tonight and stay there until Thursday afternoon. Our lows
Friday morning may be in the single digits.

Very cold arctic air is filtering southward into northeastern-eastern New Mexico behind the front this morning. At 8 AM Clayton was reporting light snow with a temperature of 7F, northeast winds were gusting to 43 mph, which was producing a wind chill of -16F.
Meanwhile, an upper-level trough of low pressure was digging southward through the Great Basin this morning. It is forecast by the models to be centered over Central New Mexico by sunrise tomorrow morning. Since this next upper-level storm to affect the state isn't going to dig further to the south and stall like last weeks storm, our snowfall accumulations here in SE NM should be limited. And the arctic airmass will not linger as long a last weeks outbreak.
Most of SE NM should see high temperatures today in the mid 50's to the mid 60's. As the arctic front enters SE NM later this afternoon, we will see our winds shift around to the north-northeast and will be sustained at around 20-30 mph, with a gusts to 40-45 mph. Temperatures will fall rapidly behind the front. By sunrise tomorrow morning most of SE NM will have temperatures in the teens. Most locations will struggle to get up to the freezing mark tomorrow.
Wind chill values will drop down into the -10F to -20F range across northeastern-eastern New Mexico this afternoon into tomorrow morning. Wind chill values will drop down into the 0F to -10F range across SE NM.
Winter Storm Watch
Chaves & Otero Counties
A Winter Storm Watch remains in effect for Chaves and Otero Counties today into tomorrow morning. The Roswell area may see up to 3" of new snow by tomorrow morning. The Cloudcroft area is expecting 3" - 6" of new snow. Areas of blowing and drifting snow, and reduced visibilities reduced may cause some travel problems upon roadways in these areas.
Winter Weather Advisory
Lincoln-Curry-Roosevelt-DeBaca Co's
A Winter Weather Advisory is in effect today into tomorrow for the Ruidoso, Clovis-Portales, and Fort Summer areas. The Ruidoso area can expect to see 3" - 5" of new snow by tomorrow morning. The lower elevations of eastern and southeastern New Mexico from Chaves County northward can expect to see 1" - 3" of new snow by tomorrow morning. Areas of heavy snow, blowing and drifting snow, and reduced visibilities may make travel upon roadways in these areas hazardous or dangerous.
As of 8 AM MST this morning there are no Winter Weather Advisories or Warnings in effect for Eddy or Lea Counties in SE NM. National Weather Service Forecasters are calling for up to an inch of snow across northern Lea County by tomorrow morning. Eddy County may see a dusting.
The Truth Is Stranger Than Fiction!
at Tuesday, February 08, 2011