Heavy Rains Have Fallen - Just Not In The Pecos Valley. 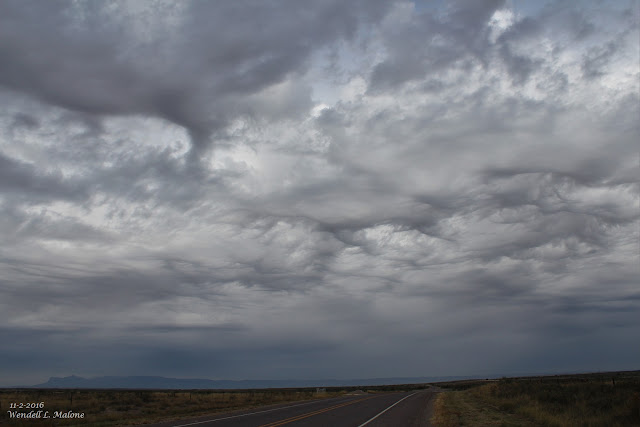 So Where Did Our Rain Go? 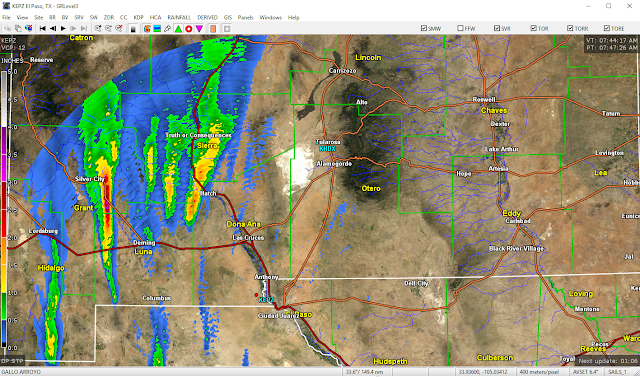 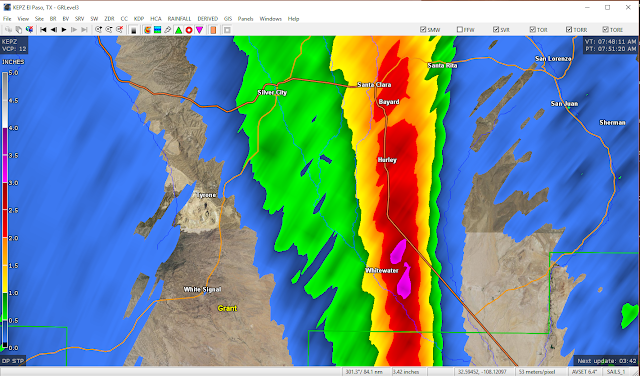 Bayard located in Grant County New Mexico, southeast of Silver City, has recorded 4.50" of rain between 3 AM and 8 AM this morning. That is just crazy for the first week of November. By any standard that amount is impressive, anytime of the year, let alone this late in the year. I talked about training thunderstorms the past couple of days and this is exactly what happened in this area. Multiple thunderstorms passing overhead in the same location, dumping heavy rains. Posted above are the El Paso NWS Doppler Radar estimated rainfall totals as of 7:51 MDT this morning. As of 9 AM this morning Flash Warnings are still being issued by the El Paso NWS Office for some locals in southern New Mexico.

Rainfall Totals The Past Two Days. 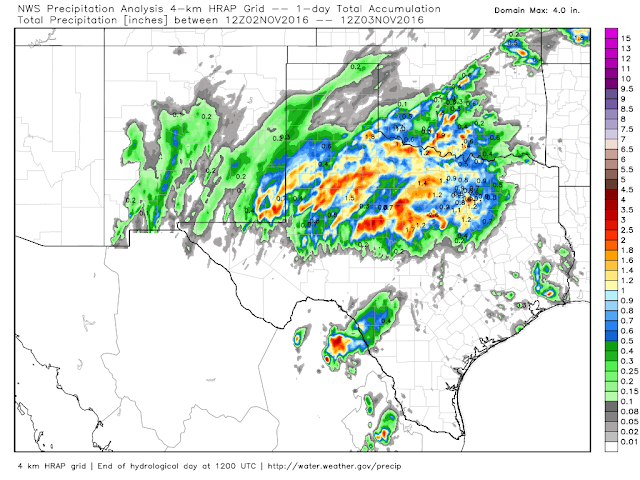 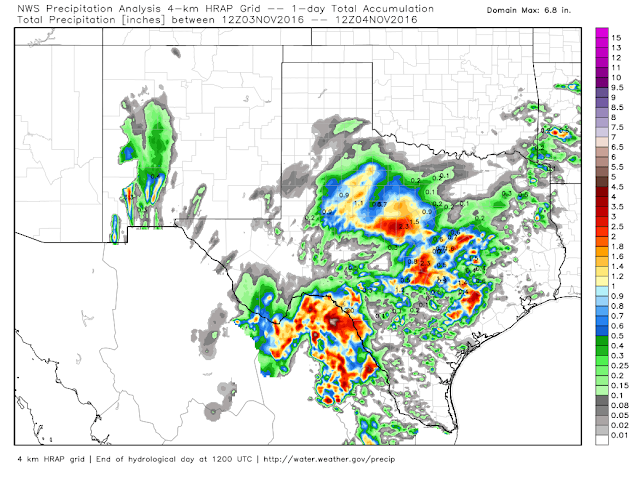 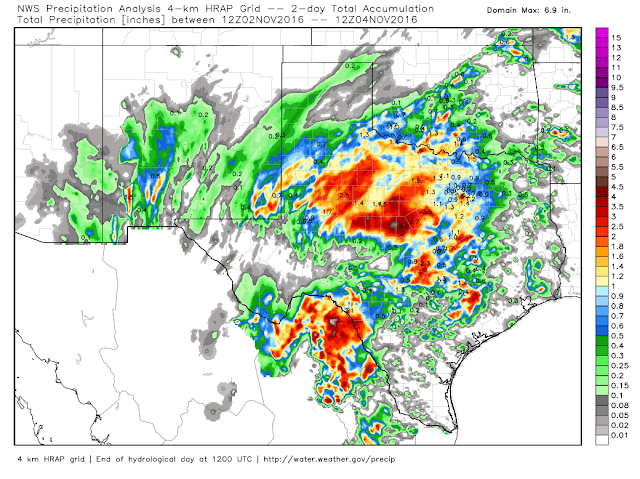 24-Hour Lightning Strikes As Of 7 AM MDT. 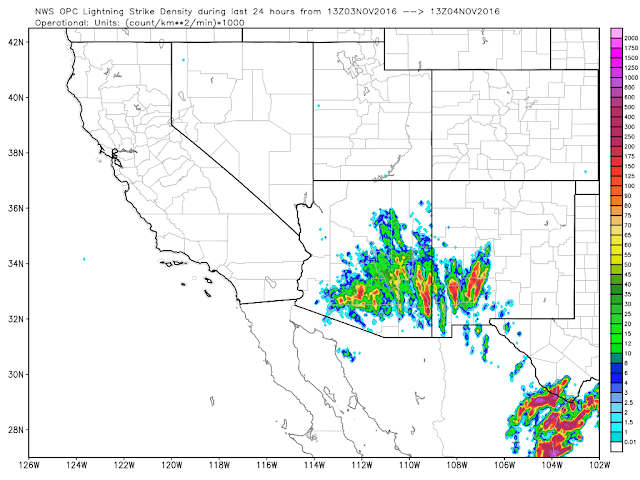 So in the past two days parts of Eddy County and Lea County picked up some locally heavy rainfall totals (1"-2"). And this is true also eastward into West Texas (1"-3") as well as across parts of southern and southwestern New Mexico (1"-4.50"). But here in southeastern New Mexico and in the nearby mountains storm totals so far have mostly been below an inch. There are a few exceptions though. Check out some of our reported two day local totals via our CoCoRaHS Observers: 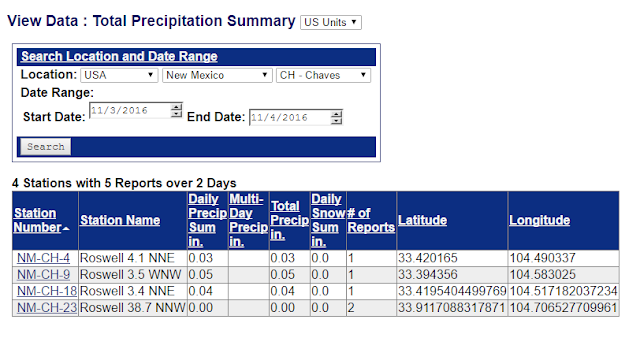 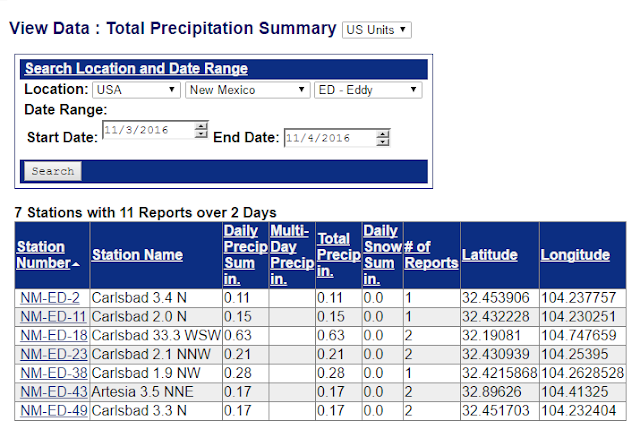 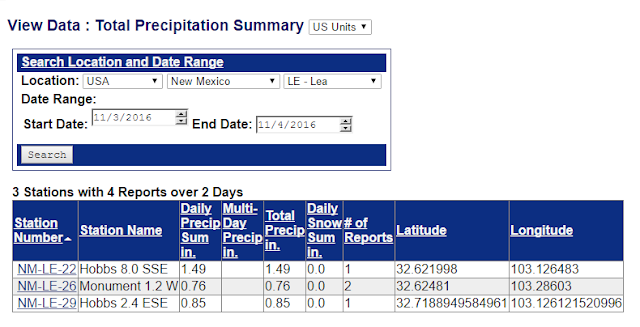 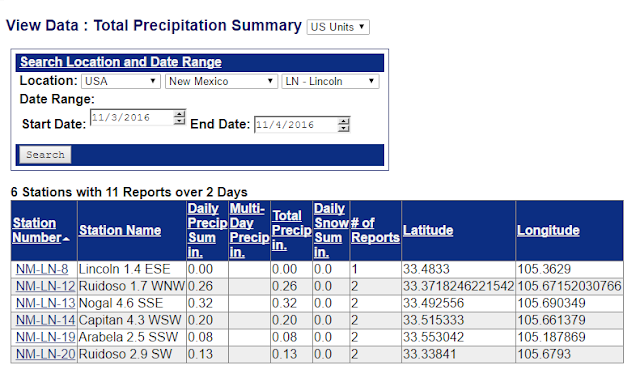 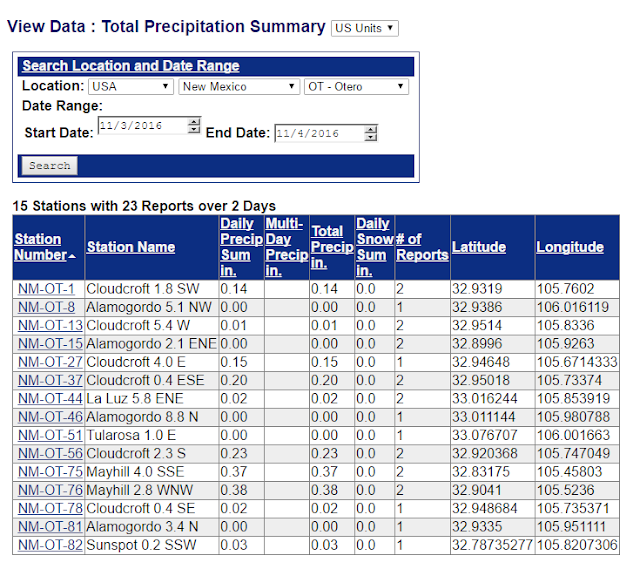 And Here Are The Grant County Totals As Of 8 AM. 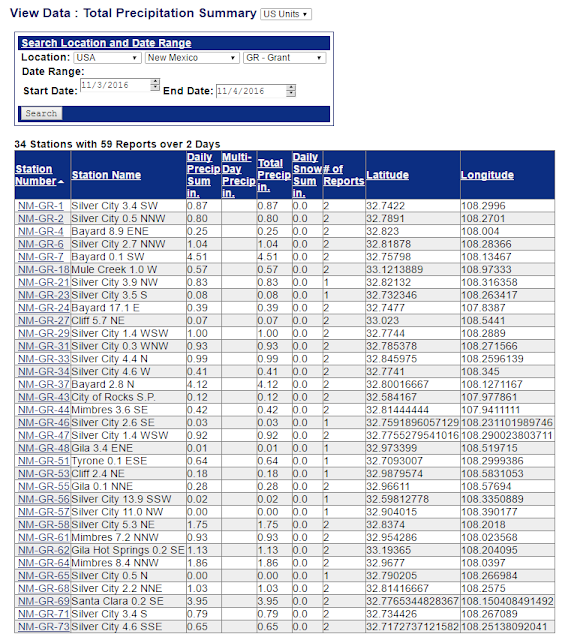 Do you want to see your rainfall totals added to these summaries? If so then become a volunteer CoCoRaHS rainfall observer by joining here. 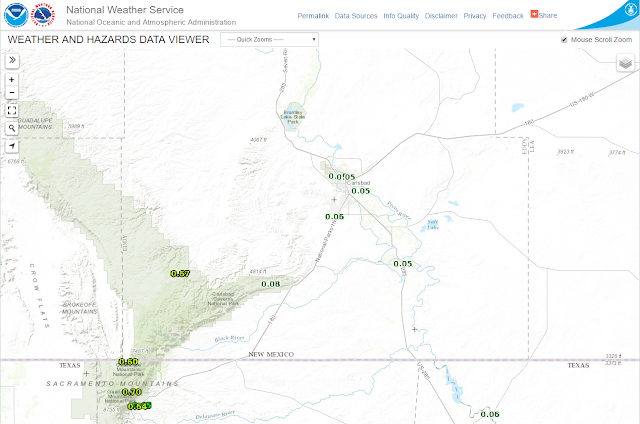 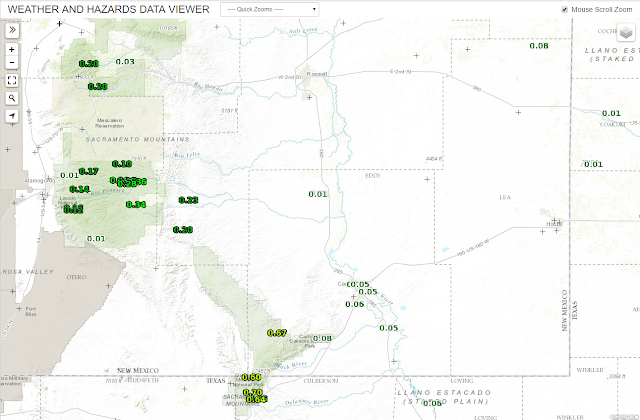 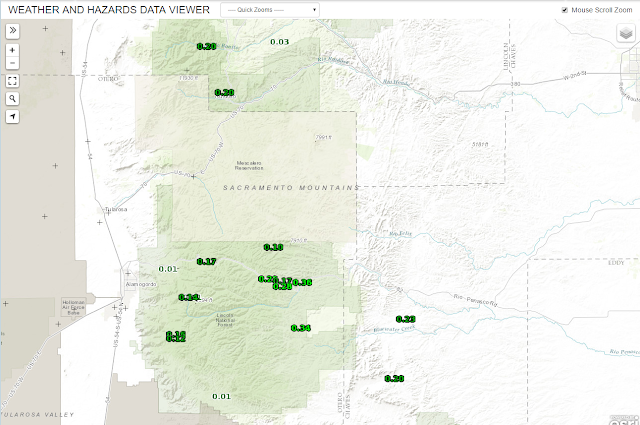 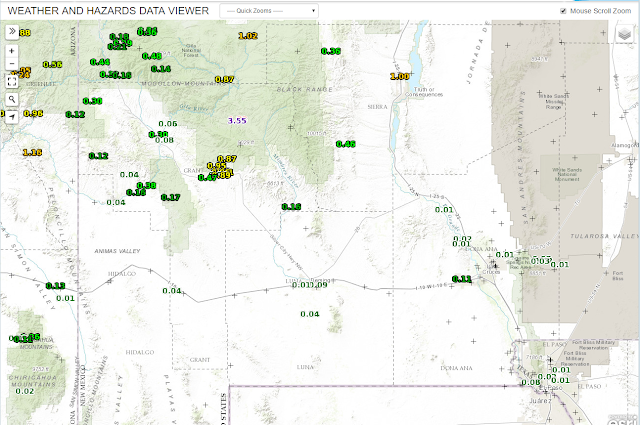 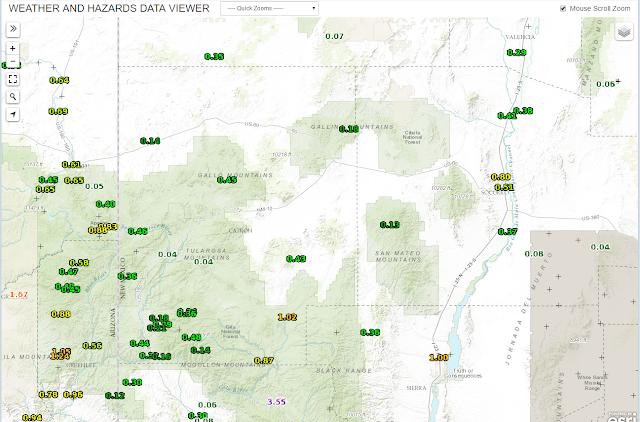 Cutoff Lows Are A Huge Pain In The Neck. 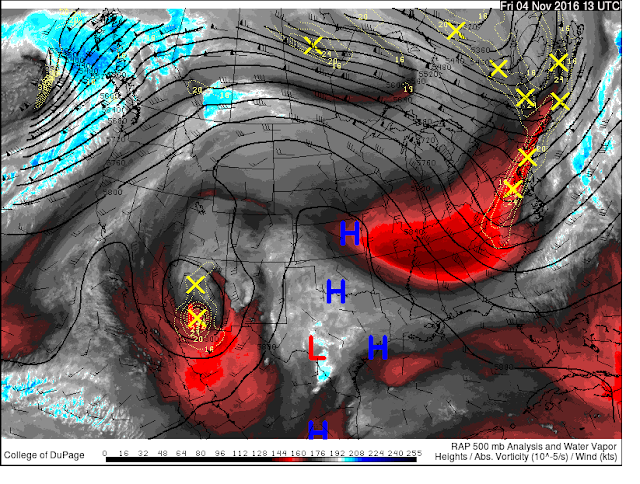 Many times I've talked about the difficulties of forecasting weather associated with cutoff lows. This one has not let us down. True to its nature its being a huge pain in the neck. I can't really say that the models have been wrong...to a point yes they have as far as we are concerned here in SE NM, but everywhere else around us they've forecasted this storm pretty good.

Now the fun part as the cutoff low (as depicted above) currently located just southwest of Tucson begins to slowly lift off to the northeast. Do we get a parting shot here locally as lobes of energy rotate counterclockwise around the low and overhead? Some models say yes, some say no. Thunderstorms and rain remain in our local forecasts today and Saturday. So we will see. 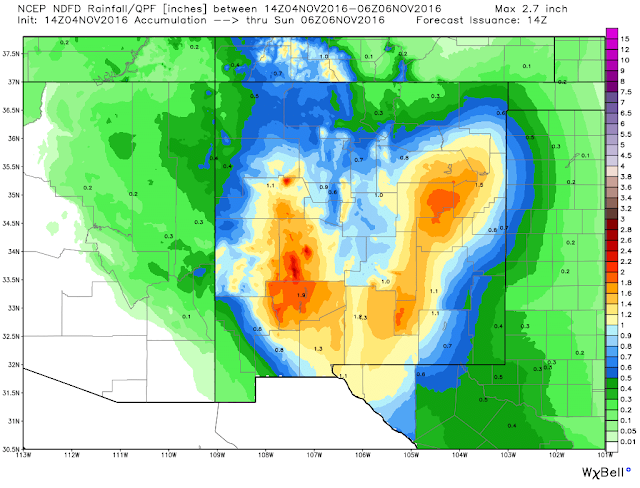 Valid From 8 AM MDT This Morning Through Midnight Saturday. 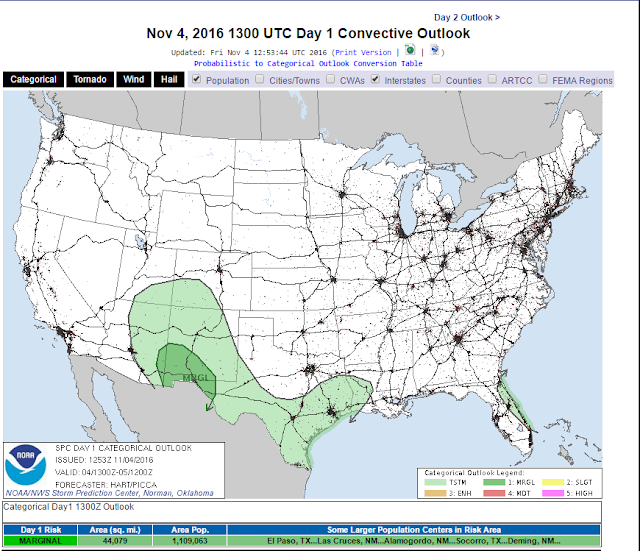 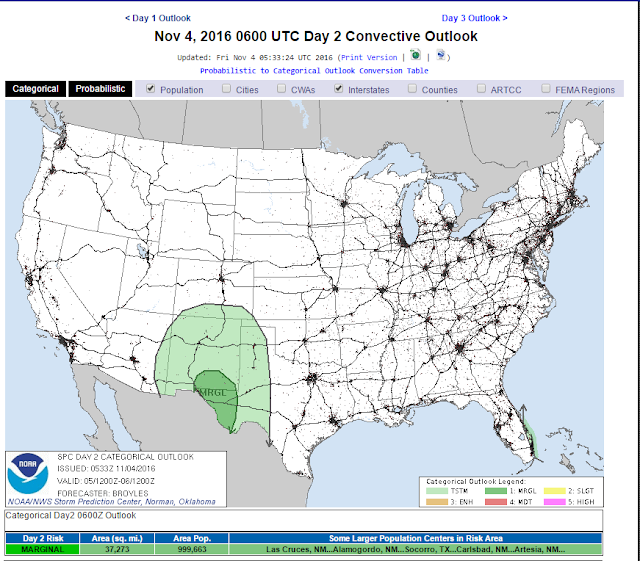 Severe thunderstorms capable of producing large hail, damaging thunderstorm wind gusts in excess of 60 mph, frequent deadly cloud to ground lightning, and heavy rainfall will be possible today across parts of southern New Mexico and far West Texas. This activity is forecast to shift a little further east on Saturday and will include the parts of southeastern New Mexico.

I know, this is just nuts, talking about severe thunderstorms and heavy rains producing flash flooding the first week of November instead of our first freeze, or our first seasonal snow storm over the state.

The Truth Is Stranger Than Fiction!
on November 04, 2016
Posted by Wendell Malone