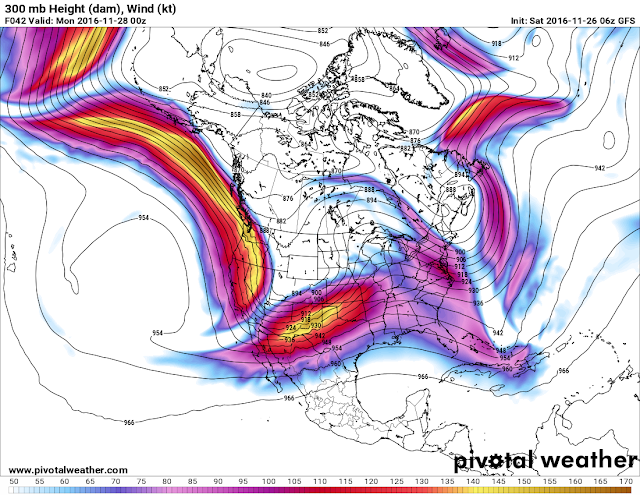 Winds aloft will be howling over New Mexico on Sunday thanks in part to the jet stream bisecting the state. The GFS forecast model is calling for the winds at the 30,000' level to be around 156 knots or 179 mph by sunset Sunday right over the top of southeastern and eastern New Mexico. 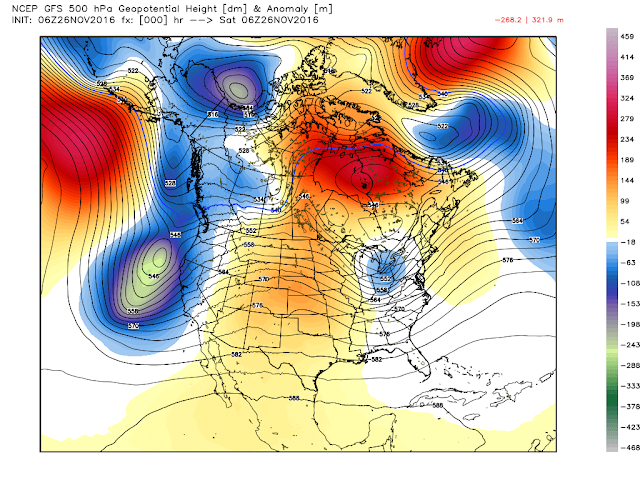 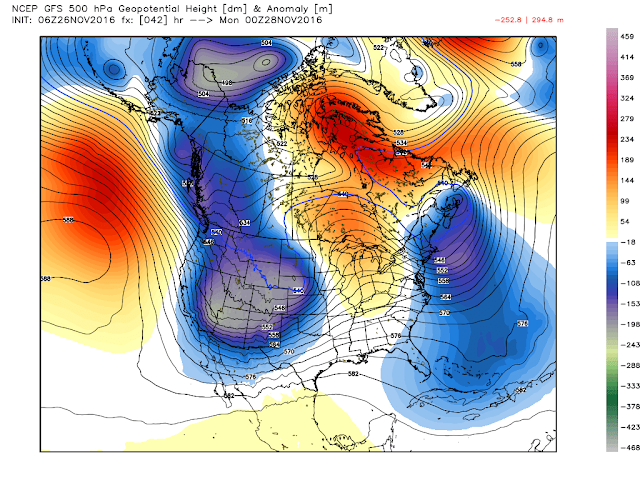 A strong and cold upper level storm was centered just southwest of Portland, Oregon at midnight last night. This will be the storm that produces high winds and lowland rains and mountain snows across New Mexico tonight into Monday. The GFS model is forecasting temperatures at the 500 millibar level or 18,000' level to drop down to -30ºC/-22ºF Sunday night into Monday. 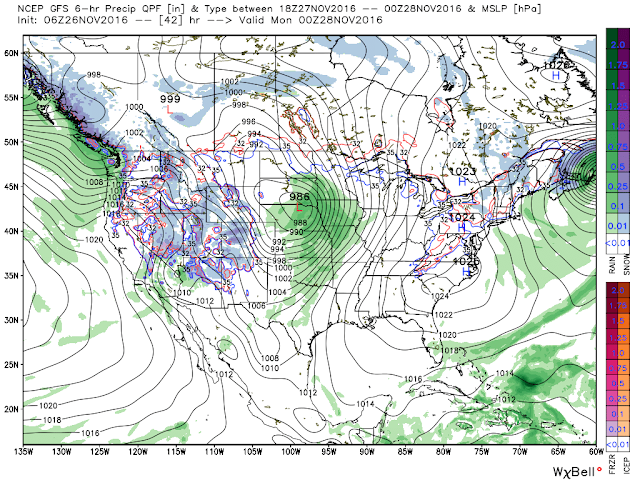 Deepening of the surface low which is forecast to be located over northern Nebraska by sunset Sunday, along with leeside troughing across New Mexico, and mixing of the strong winds aloft to the surface, will all combine to make for a windy day across the state. 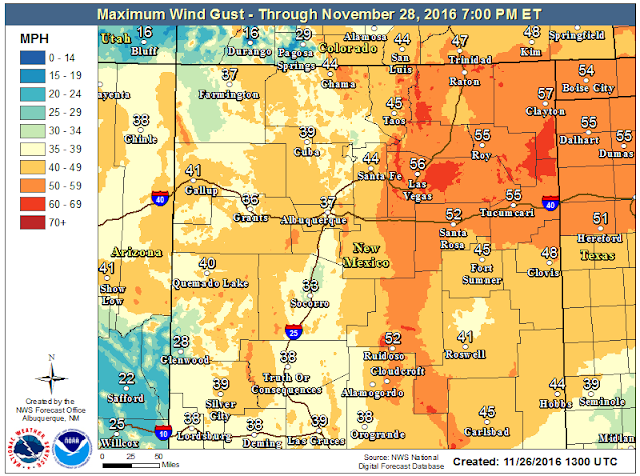 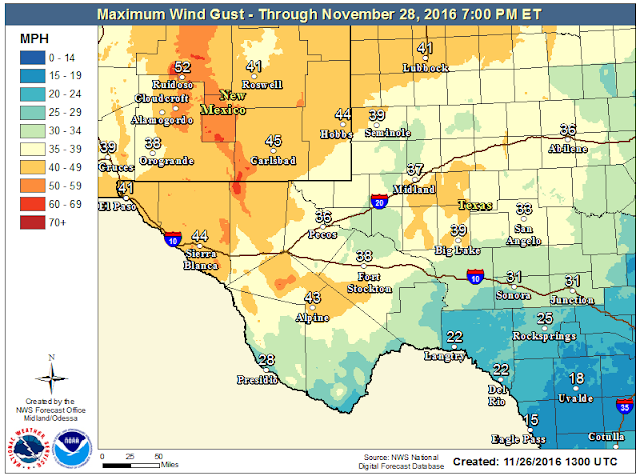 Southwesterly to westerly winds are forecast to gust up into the 40-45 mph range across the southeastern plains Sunday afternoon. A High Wind Watch has been issued for the Guadalupe Mountains of SE NM and W TX for Sunday through Monday afternoon. Southwesterly to westerly winds sustained at around 35 to 50 mph with gusts near 65 mph are forecast. Additional Wind Advisories and High Wind Watches/Warnings may also be issued for New Mexico today. 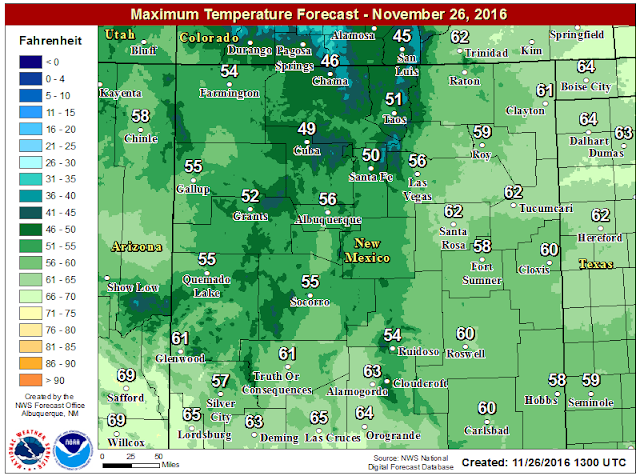 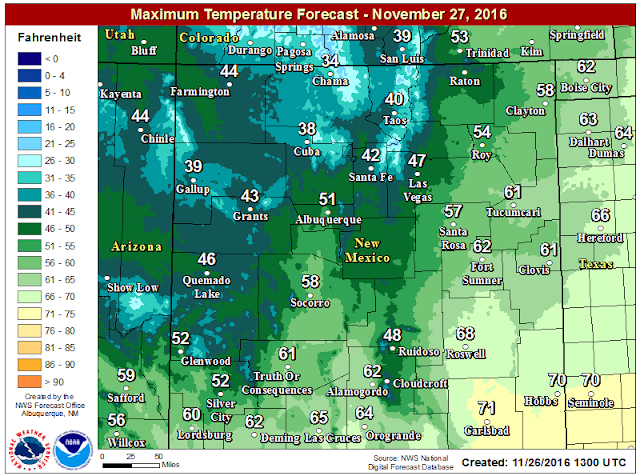 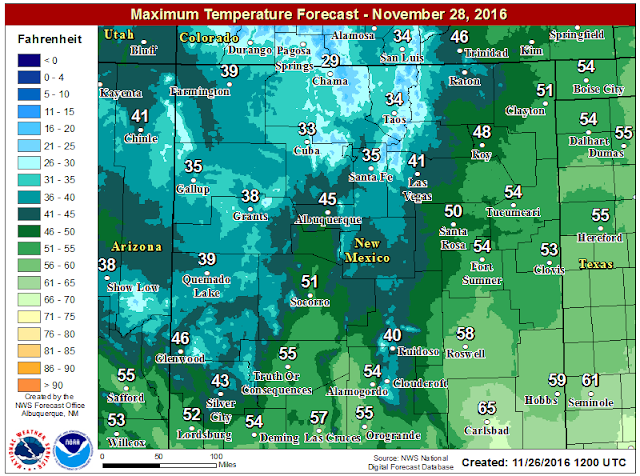 Seasonably mild temperatures will occur across the lower elevations of the local area today into Monday...with Sunday seeing the warmest readings. Next week will be colder behind a cold front and the departing storm. Highs across the southeastern plains are forecast for the most part to be in the 50's Tuesday into Friday with lows in the 20's. 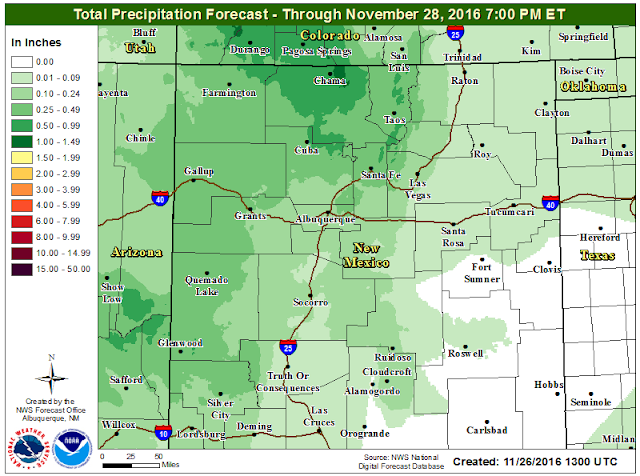 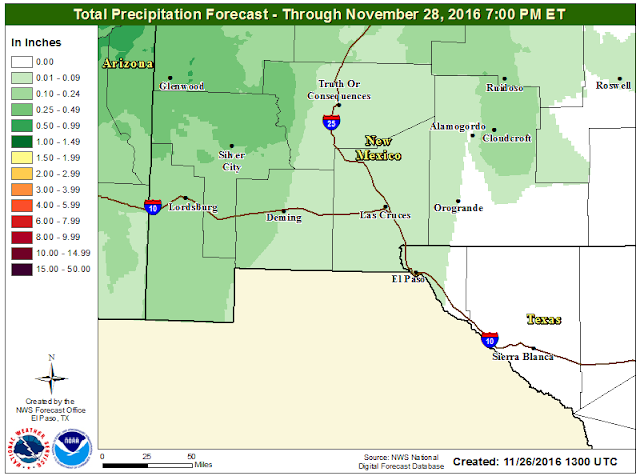 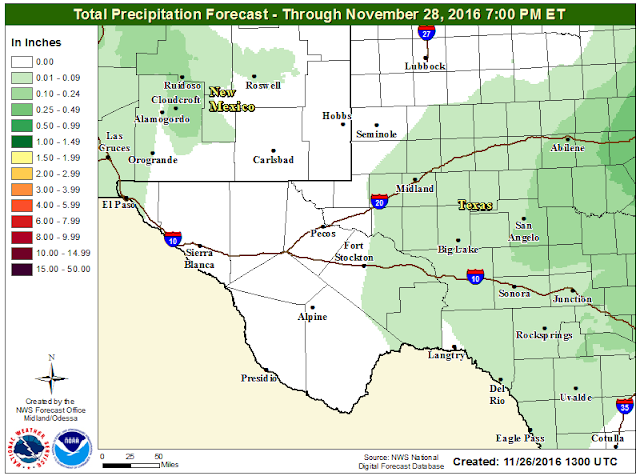 Most of New Mexico is slated to receive at least some light precipitation out of this next winter-like storm to impact the state today into Monday. But of course the southeastern plains appear to be left out this go around. 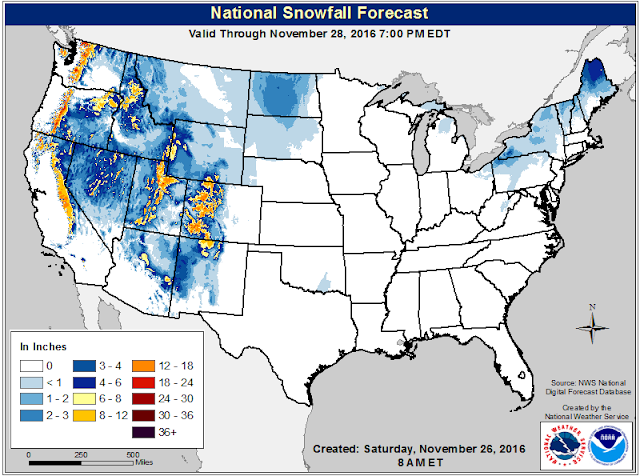 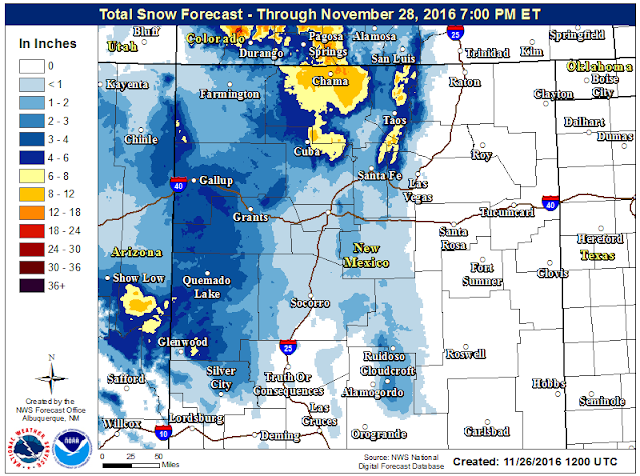 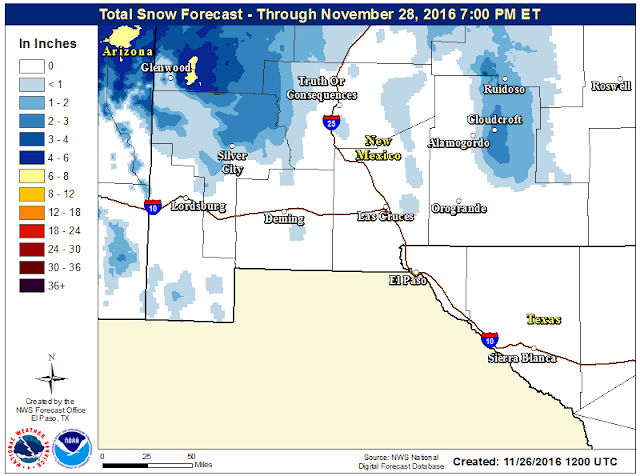 New Mexico's Ski Resorts and higher mountain locations across the northern one half of the state appear to setting up for a fairly decent storm that will drop up to a foot of fresh powder in a few spots today into Monday. A Winter Weather Advisory is now in effect for the Chama area.

For now it appears that the higher elevations of the Sacramento mountains will pick up 1" to 3" with Ski Apache possibly seeing a little more than this. Note their forecast for Sunday with westerly winds gusting up to 65 mph, temps in the mid 30's, and a wind chill value near 0ºF. 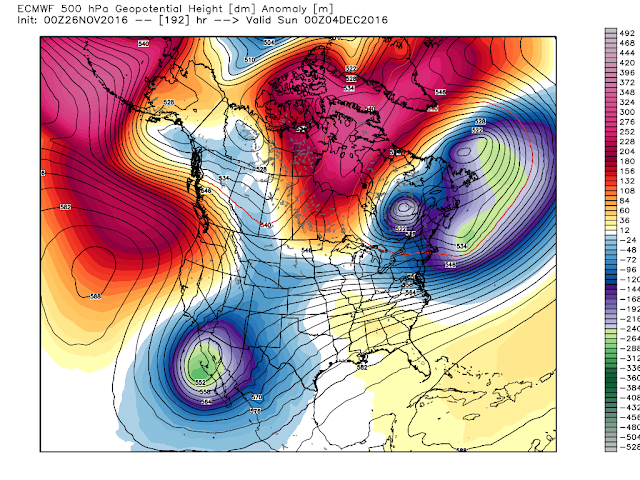 A second upper level storm is forecast to take a swing at the area by mid-week with a third a potentially much strong storm taking aim at us next weekend. In fact last night's 00Z/5 PM MST run of the European (ECMWF) model fell off the edge of the earth with its forecast next weekend.

It hammers New Mexico with snow...and very heavy snow at that. To the tune of 17" in Carlsbad and 2' in the Sacramento mountains. That got your attention didn't it. No I'm not making that up, this model really did come out with this forecast.

But, and there is always that big word, take this with a huge grain of salt. Remember model forecast beyond 72 hours are usually to be questioned, and 7 to 10 days out you should really question their forecasts. Which I do in this case. Anyway whether or not that much snow falls is totally unknown at this point in time, what is fairly certain is that we have entered that colder and stormier pattern shift I've been talking about. And it favors a good season for the states Ski Resorts, at least early on anyway. 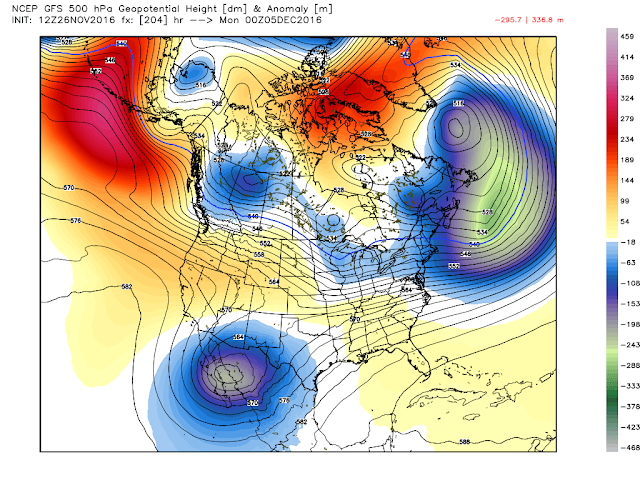 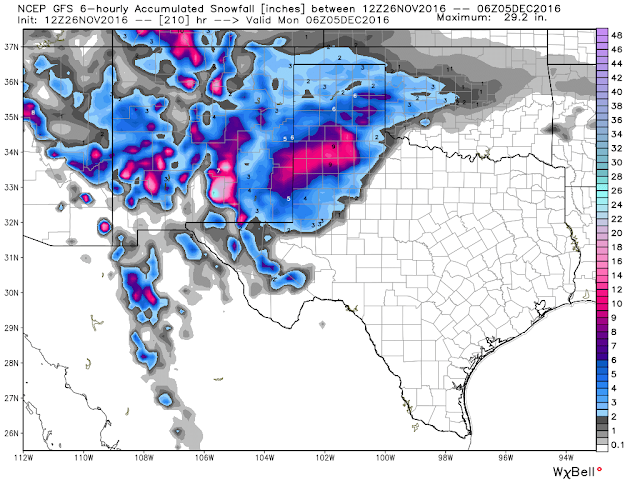 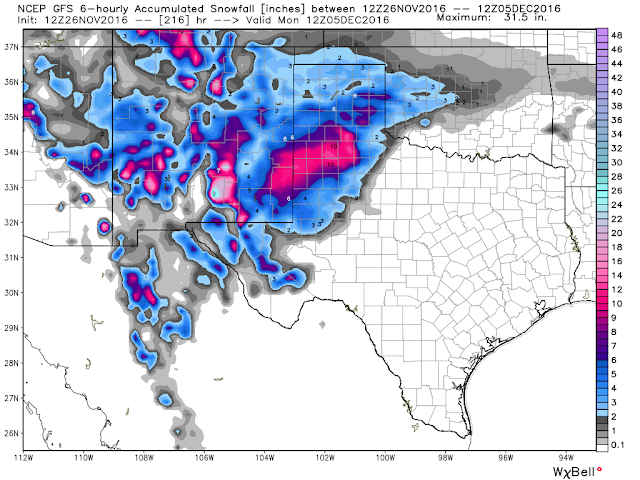 This mornings 12Z/5 AM MST run of the GFS computer forecast model like its European (ECMWF) counterpart jumps aboard the crazy train long range forecast. I don't like jumping ahead this far out in time with forecasts like these...because 90% of the time they are wrong.

What's interesting about this forecast though is that all three of the long range models (GFS, ECMWF, GEM) are forecasting a deep cold cutoff low over northern Mexico by next weekend. So although we can't really put any stock in their actual forecast details this far out in time...we should take note of the pattern change the models are hinting at. Just food for thought so don't get too worked up over this.

The Truth Is Stranger Than Fiction!
on November 26, 2016
Posted by Wendell Malone