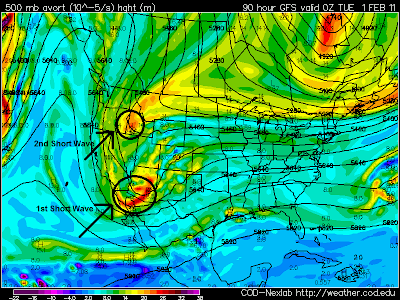 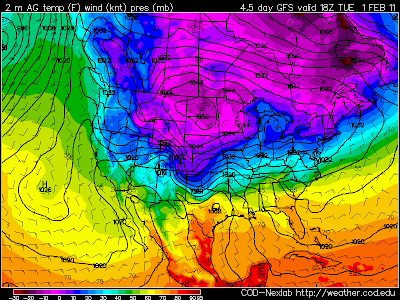 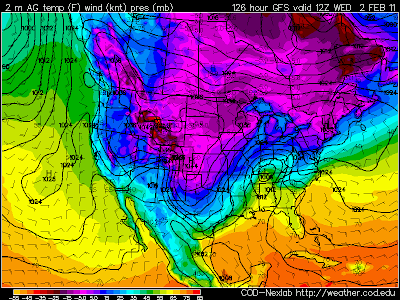 GFS Surface Temp Forecast Map
Valid At 5 AM MST Wed Feb 2, 2011.
Click On The Maps To Enlarge Them.
Complicated Winter Storm Next Week!
What looks like our best shot at a winter storm is shaping up to impact SE NM early next week. As can be expected, this next potential storm is already give the computer models fits.They do agree that a winter storm will be brewing over the Desert Southwest from about Monday into Wednesday of next week, and that's about all.
This next winter storm may come at us in pieces, and has the potential to affect the local area from Monday into at least the middle of next week. A wintry mix of precipitation may impact SE NM from Monday night into Wednesday. This may include a mix of rain, freezing rain, sleet, and snow. There is the potential that the mountains may see some significant snowfall totals out of this storm.
Today's weather will be beautiful with our afternoon high temps climbing up into the mid-upper 60's. Saturday and Sunday will be just a tad warmer with highs in the upper 60's to near 70. Mostly sunny skies will prevail and the winds won't be too much of a problem, so it will be a good time to get outdoors and enjoy the calm before the storm.
Flip a coin and take your pick...that's about as good as I can offer for now concerning the details of early next weeks winter storm. A potent arctic/polar cold front will arrive sometime around Monday, and when it does you will know it.
Blustery north to northeasterly winds and falling temperatures will accompany it's passage. Wind chill values will fall down into the single digits and teens behind the front. If the front is a little late in arriving Monday, we will see afternoon high temps in the mid-upper 60's. If it is a little faster than currently is being forecast, then we won't get that warm on Monday.


Tuesday's highs look like they will only be in the 30's, with the upper 20's over the eastern plains. Overnight low temperatures may drop down into the single digits and teens by the middle of next week, or colder, if we are lucky enough to get some accumulating snowfall out of this storm.
The Truth Is Stranger Than Fiction!
at Friday, January 28, 2011