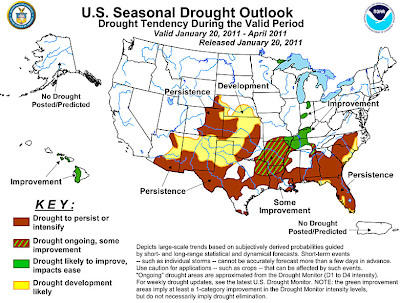 Click On The Map To Enlarge It.
Little Hope For A Pattern Change.
A southeastward moving upper level storm, accompanied by a southward moving cold front, produced a few scattered very light rain/snow showers over parts of eastern and southeastern New Mexico yesterday afternoon and evening.
The Roswell Airport managed to squeeze out .01" of rainfall, and this was the only measurable precipitation that I could find early this morning. Cannon AFB briefly reported a mix of blowing dust which reduced the visibility down to 2 miles, then a few light snow showers yesterday afternoon. The dust that filled our skies was courtesy of the eastern plains.
Strong northerly to northeasterly winds accompanied the frontal passage yesterday afternoon. Peak wind gusts observed included-
Cannon AFB Clovis 51 mph
Clovis Municipal Arpt 51 mph
Tatum Mesonet 46 mph
Bat Draw Raws - Carlsbad Caverns 45 mph
Roswell Arpt 43 mph
Carlsbad Arpt 41 mph
Caprock Raws 40 mph
South Hobbs 40 mph
Artesia Arpt 39 mph
Most of our winter storms of late, have approached the local area from the Great Basin, coming in from the northwest. This inland trajectory leaves them moisture starved and hence the lack of rain or snow across southeastern New Mexico. La Nina is the culprit and this pattern is forecast to continue into at least the spring, if not the summer. So continued dry is the theme for our future.
The Truth Is Stranger Than Fiction!