Tropical Storm Arlene Strengthens.
Click On The Maps To Enlarge Them. 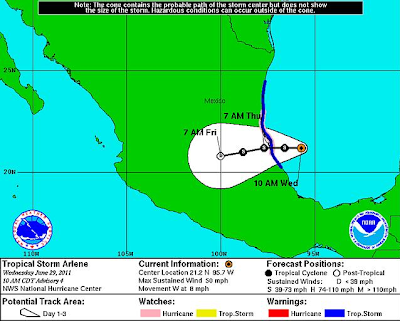 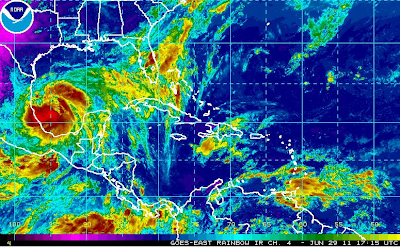 IR Rainbow Satellite Image Of TS Arlene At 11:15 AM Today. 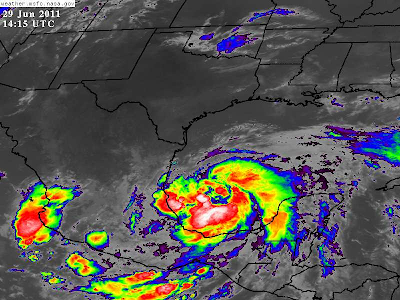 IR Satellite Image Of TS Arlene At 8:15 AM MDT This Morning.
As of 9 AM MDT this morning, Tropical Storm Arlene was located near Latitude 21.2 North and Longitude 95.7 West. Arlene is currently towards the west at 8 mph. Maximum sustained winds are now up to 50 mph, with a central pressure of 1000 MB/29.53".
Arlene is forecast to produce 4" - 8" of rainfall over the Mexican States of Tamaulipas, Veracruz, Eastern San Luis Potosi, and Eastern Nuevo Leon. Isolated pockets of 15" of rain may fall over the mountainous terrain. These torrential rainfall totals may cause life threatening flashing and mud slides.Tropical Storm Arlene has the potential to strengthen into a Hurricane before making landfall along the Mexican Coast on Thursday.
Whether or not the remnant moisture from Arlene gets pulled northward out of Mexico and into New Mexico by this weekend is the million dollar question. The position of the mid-upper level ridge of high pressure will play a determining role in this.
The US GFS model forecasts the center of the ridge to wobble around the Four Corners region this up coming holiday weekend, and then shifts it further to the west next week. This would keep the Arlene's remnant moisture out of the area, and off to our south and west.
The European (ECMWF) model keeps a broad upper level ridge stretched out from the Desert Southwest to the Mississippi Valley, with one center to our northwest, and one to our east. This would allow some of Arlene's moisture to seep northward into the state this weekend.
----------------------------------------------------
New Mexico Fires.

"The Little Lewis Fire in Otero County has jumped containment lines forcing additional mandatory evacuations.
In addition to the 400 people already evacuated from communities of Sacramento and Weed, authorities ordered the evacuation Wednesday afternoon of the Agua Chiquita, Hay Canyon, Ehart Canyon, and Camp of the Tall Pines areas.
Officials blame lightening for the fire that has so far burned between 500 and 700 acres.
Sacramento and Weed were under a precautionary evacuation order Tuesday night but those living in Sacramento have been urged to leave immediately as the fire threatens several structures.
An evacuation center has been set up at the Cloudcroft Fie Station.
Stay tuned to KOB Eyewitness News 4 and KOB.com for continuing developments."
The Little Lewis Fire -
(8 AM June 29, 2011)
0% containment.
500-700 acres burned.
Burning 2 miles Southwest of Weed, NM in Otero County.
Started by lightning and reported June 28, 2011.
The Donaldson Fire-
(9 AM June 29, 2011)
0% containment.
Estimated 15,000 acres burned.
Burning 6 miles south of Hondo, NM in Lincoln County.
Started by lightning and detected June 28, 2011.

Incredible Photo Slideshow Of The Las Canchas Fire.
(Courtesy Of The Albuquerque Journal.)
For Other Fires Currently Burning In NM Please Visit This Link-
New Mexico Fire Information.
The Truth Is Stranger Than Fiction!
at Wednesday, June 29, 2011