More Heat...Watching The Bay Of Campeche. 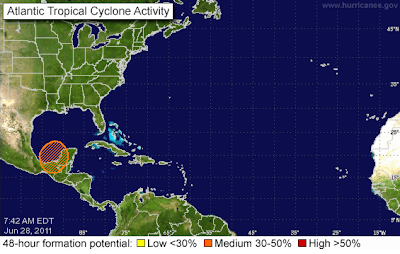 Tropical Outlook Courtesy Of The NHC. 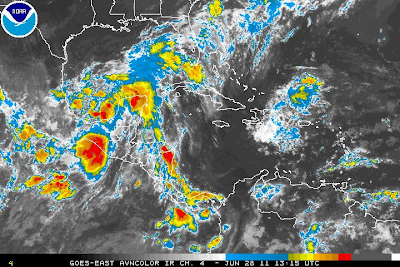 IR Satellite Image At 7:15 AM MDT Today.
A tropical wave moving off of the Yucatan Peninsula, and into the Bay of Campeche today, has a 50% chance of becoming a Tropical Storm withing 48 hours, according to this mornings outlook from the National Hurricane Center (NHC). 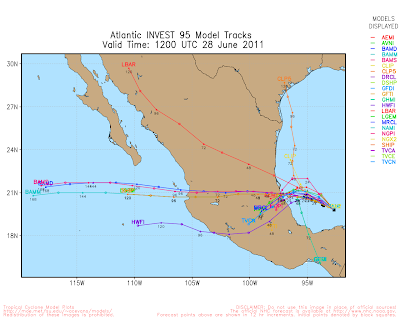 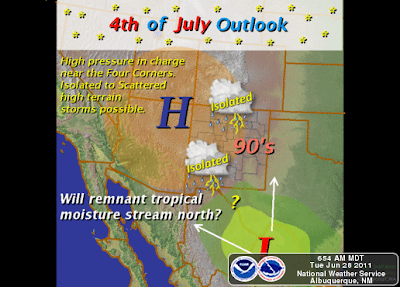 Outlook Is Courtesy Of The Albuquerque NWS Office.
All eyes will be on the Bay of Campeche today as a tropical wave emerges from the Yucatan Peninsula. There is a fairly decent chance (50%) that this easterly wave will develop into a Tropical Storm within the next 48 hours. The models generally agree that this tropical system will then crawl slowly northward along the eastern Mexican Coastline this week.
If this storm can remain far enough off shore it will have a better chance of strengthening. Should this storm become strong enough it could be the seasons first named storm (Arlene).
Its eventual track and strength may have an impact upon New Mexico's weather by next weekend, and possibly the 4th of July holiday. This system could help to jump start our
summer monsoon, as remnant moisture is potentially drawn northward into Mexico and eventually New Mexico.
-------------------------------------------------
Yesterday's Heat - T-Storms.
High temperatures yesterday once again exceed the century mark across SE NM and nearby areas. Highs ranged from 109 at the Carlsbad Airport, 109 at the Paduca Raws near the WIPP Site, 109 at the Jal Climate Station, 108 here at my home, 108 at the Carlsbad Climate Station, 107 at the Caprock Raws, 106 at the Artesia Climate Station, and 104 at the Roswell, Artesia, and Hobbs Airports.
A weak cold front moved into SE NM late yesterday afternoon, and this feature provided just enough lift and moisture to fire up a few scattered t-storms. A cluster of t-storms formed just east and southeast or Roswell and outflow winds from these storms produced a wind gust to 60 mph at the Roswell Airport along with lots of blowing dust.
A personal weather station located in Clovis (CW3200) measured .54" of rainfall from these storms yesterday.
Other rainfall totals include-
Cannon AFB Near Clovis .27"
0.4 ESE Cloudcroft .19"
Cloudcroft - Dry Canyon .18"
4.9 NE Cloudcroft .15"
Clovis Municipal Arpt .14"
Roswell Industrial Arpt .10"
Caprock Raws .08"
1.4 ESE Lincoln .03"
8-Mile Draw Raws .02"
3.9 NNW Ruidoso .02"
Mayhill Raws .02"
0.07 N Sunspot .01"
Dog Canyon Raws .01"
Rainfall Totals Are Courtesy Of-
CoCoRaHS
MesoWest Weather
High Temperature Data Is Courtesy Of-


""Uploaded by tangkha on Jun 27, 2011
The Las Conchas fire near Los Alamos, Jemez Springs, and Santa Fe New Mexico. These shots were taken from the west and south. The fire started from a spark and grew to over 45,000 acres in less than 24 hours."
The Truth Is Stranger Than Fiction!
at Tuesday, June 28, 2011