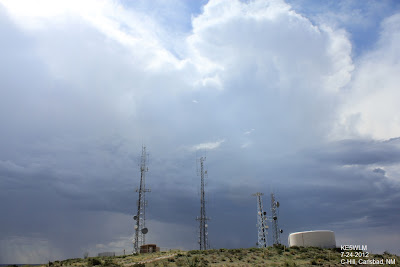 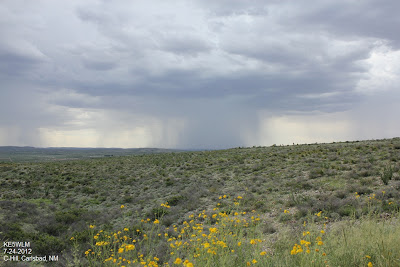 Widely scattered thunderstorms developed yesterday afternoon, although they were not as widespread as most of us had hoped they would be. I took the top two photos from C-Hill in Carlsbad at 3:48 PM yesterday.

The two GRLevel3 2.00 radar screen shots were taken at 4:30 PM. The top image is the composite reflectivity image of the thunderstorms, and the bottom image depicts the storm tops, which eventually topped out at 51,000' MSL.

These thunderstorms produced locally heavy rain that caused the Last Chance Arroyo to flood at 5:20 PM to a depth of 5'-6', at the State Highway 137 (the Queen Highway) crossing, located some 25 miles west-northwest of Carlsbad. Several vehicles had to wait for the flood waters to recede before they could pass through the low water crossing.

No rainfall reports were received from that immediate area.

A Flash Flood Warning was issued by the Midland National Weather Service Office as a result of this flooding for Central Eddy County until 8:30 PM. The warning was cancelled ahead of its expiration time when the flood waters receded.

Rainfall Totals Are Courtesy Of-