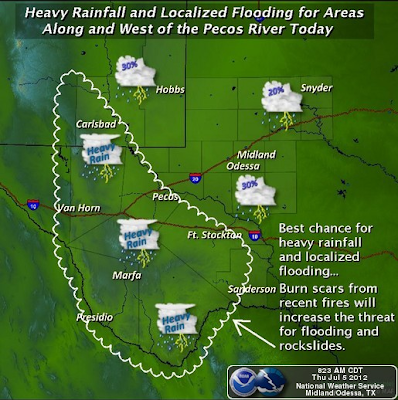 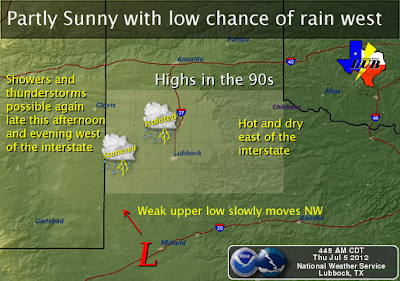 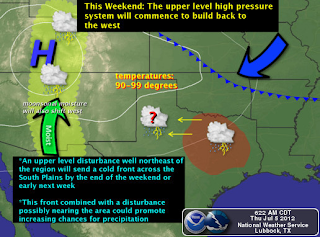 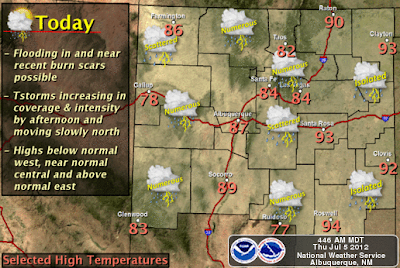 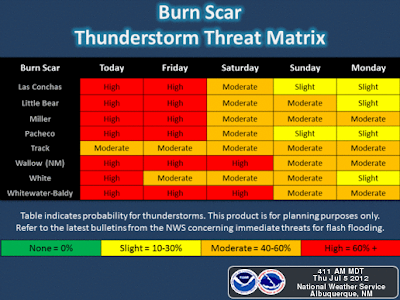 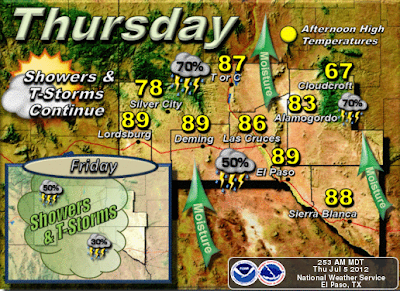 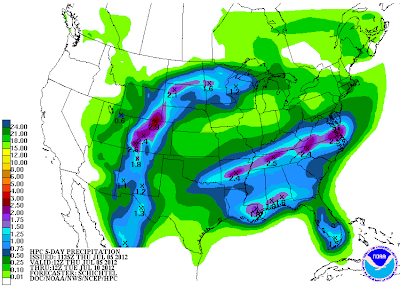 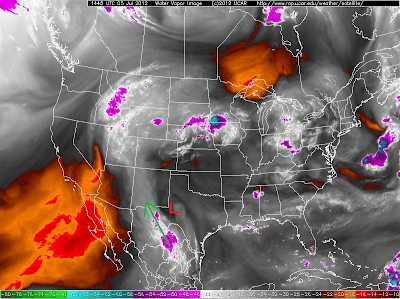 Thunderstorms begin firing up over the mountains just before noontime yesterday. Afternoon thunderstorms then begin popping up across the southeastern plains. A thunderstorm produced sustained winds of 63 mph with gusts to 79 mph at the Clovis Municipal Airport at 10:15 PM last night.

A few spots managed to receive some decent rainfall out of the storms. A flash flood warning was issued for southwestern Eddy County at 7:38 PM after thunderstorms dumped 2.84" of rain on the Queen Raws and a spotter reported flash flooding in Dark Canyon Arroyo east of Eddy County Rd #408.

Today should turn out to be pretty much of a carbon copy of yesterday's weather here in southeastern New Mexico. A weak upper-level low is located in southwest Texas, southwest of the Midland/Odessa area, will continue to move slowly northwestward and help to destabilize the atmosphere today. Our first monsoonal surge of the season continues to feed sufficient moisture into the state from the south, which will continue to aide in the development of scattered thunderstorms this afternoon and evening. Some thunderstorms may continue well into the night.

Locally heavy rainfall will once again be possible today and tonight. Rainfall rates could be as high as 1" - 2" per hour with the heavier thunderstorms. Once again the mountains are the favored areas to see the most widespread thunderstorm activity. Localized flash flooding will be possible over and below the burn scars in the Guadalupe, Sacramento, and Capitan mountains.

Our afternoon high temperatures will remain close to seasonal normals with the southeastern plains seeing the mid 90's and the mountains (Ruidoso and Cloudcroft areas)  the upper 60's to the upper 70's. Yet another easterly wave moving westward in Texas combined with a cold front approaching from the north may increase our chances for more rain in the area by around next Tuesday.

Rainfall Totals Are Courtesy Of-

My Web Page Is Best Viewed With Google Chrome.
on July 05, 2012
Posted by Wendell Malone