Worst Drought In 24 Years Will Drive Up Food Costs! 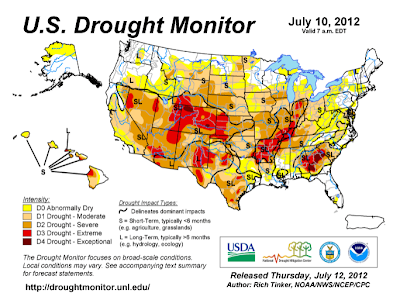 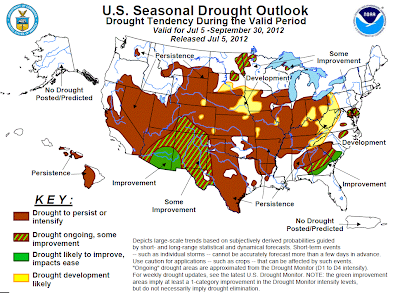 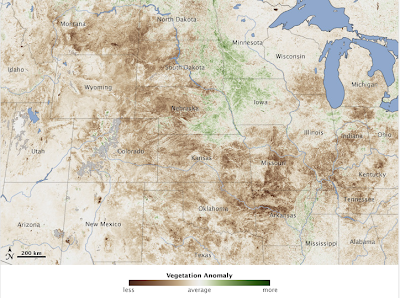 "Farmers across the United States hoped for rain in July 2012 as a drought of historic proportions parched key commodity crops, including corn, soybeans, and wheat. On July 11, the United States Department of Agricultureannounced that more than 1,000 counties in 26 states qualified as natural disaster areas—the largest total area ever declared a disaster zone by the agency.
The extent of the damage to crops is depicted in this vegetation anomaly map based on data from the Moderate Resolution Imaging Spectroradiometer (MODIS) on NASA’s Terra satellite. The map contrasts plant health in the central United States between June 25 and July 10, 2012, against the average conditions between 2002 and 2012. Brown areas show where plant growth was less vigorous than normal; cream colors depict normal levels of growth; and green indicates abnormally lush vegetation. Data was not available in the gray areas due to snow or cloud cover. The image is based on the Normalized Difference Vegetation Index (NDVI), a measure of how much plant leaves absorb visible light and reflect infrared light. Drought-stressed vegetation reflects more visible light and less infrared than healthy vegetation.
The most severe damage to crops appears to be centered on Missouri, Arkansas, Oklahoma, Texas, Kansas, Nebraska, and South Dakota. Crops in much of the upper Midwest—southern Wisconsin, Michigan, Indiana, southern Illinois, western Kentucky, and western Tennessee—also show signs of strain. States in the Mountain West that are in the midst of a busy wildfire season—Montana, Wyoming, and Colorado—have also experienced marked declines in the health of vegetation. The drought has been less severe in Iowa, a key corn-growing state."
---------------------------------------------------------------------------------------
Fox News- "The historic drought baking the nation's breadbasket is about to hit American consumers where it hurts most -- the supermarket checkout.

"The only question is when."

Everything from breakfast cereal to roast beef will cost more as a result of the worst drought in 24 years, which has already prompted authorities to declare more than 1,000 counties in 26 states -- nearly two-thirds of land in the lower 48 states, stretching from Nevada to South Carolina -- natural disaster areas.

Only in the 1930s and the 1950s has a drought covered more land, according to federal figures released Monday. So far, officials say there's little risk of a Dust Bowl-type catastrophe, but crop losses could mount if rain doesn't come soon -- and that means across-the-board higher food prices."