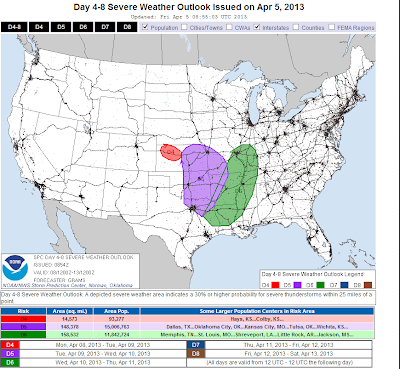 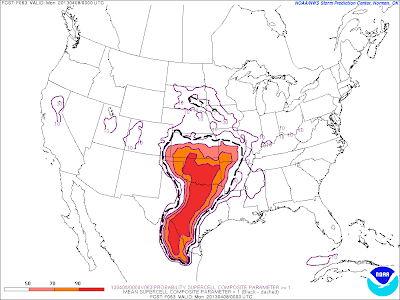 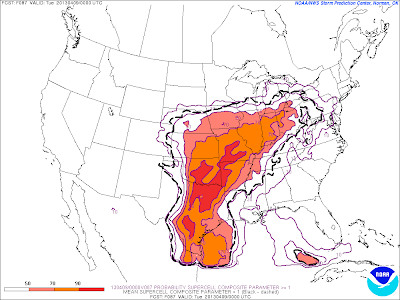 A significant round of severe weather appears to be shaping up for early next week. Trying to pin the details down of just exactly where and when at this time is hard, mainly due to the uncertainty in the placement of the next strong upper-level storm that is forecast to dig into the Four Corners Region by early next week.

Supercell thunderstorms will be capable of producing large hail, damaging thunderstorm wind gusts in excess of 58 mph, heavy rainfall along with possible flash flooding, and tornadoes across the above mentioned areas early next week. Some of these tornadoes may be of the large and long track variety.

Severe weather could break out as early as Sunday afternoon, but will be more likely Monday into Wednesday. The exact details of this event will likely change between now and next week so pay attention to your local weather conditions folks. Its spring and heads up time.

DAY 4-8 CONVECTIVE OUTLOOK
NWS STORM PREDICTION CENTER NORMAN OK
0354 AM CDT FRI APR 05 2013
VALID 081200Z - 131200Z
...DISCUSSION...
...SEVERE WEATHER APPEARS LIKELY EARLY NEXT WEEK FROM THE CNTRL/SRN
PLAINS TO THE MID/LOWER MS VALLEY...
WHILE RICH GULF MOISTURE HAS BECOME CONFINED TO THE SWRN PORTION OF
THE BASIN IN THE WAKE OF A COLD FRONT THAT HAS REACHED THE YUCATAN
PENINSULA...AIR MASS MODIFICATION WILL OCCUR THIS WEEKEND AND
ESPECIALLY EARLY NEXT WEEK AHEAD OF AN AMPLIFIED UPPER-LEVEL TROUGH
OVER THE WEST. THE WRN TROUGH WILL EJECT INTO THE CNTRL CONUS BY
MID-WEEK AS A POTENT MID-LEVEL JET STREAK ROUNDS THE BASE OF THE
TROUGH. BY THIS TIME...SEASONABLY RICH GULF MOISTURE WILL BE PRESENT
ALONG THE DRYLINE AND EVENTUAL COLD FRONT THAT WILL PUSH EWD TOWARDS
THE MS VALLEY. WITH SEVERAL DAYS OF MOISTURE RETURN OCCURRING
BENEATH A STOUT EML...A MODERATE TO STRONGLY UNSTABLE AIR MASS WILL
LIKELY DEVELOP.
DESPITE AVERAGE DIFFERENCES BETWEEN MODELS WITH REGARD TO
TIMING/PLACEMENT OF THE KEY SYNOPTIC FEATURES BY D5-6...INCREASING
FORCING FOR ASCENT ALONG WITH STEEP MID-LEVEL LAPSE RATES AND
STRENGTHENING DEEP-LAYER SHEAR SHOULD RENDER A SETUP FAVORABLE FOR
POTENTIALLY SIGNIFICANT AND WIDESPREAD SEVERE WEATHER DURING THIS
TIME FRAME. GREATEST DISCRETE SUPERCELL POTENTIAL WITH PRIMARILY
VERY LARGE HAIL AND TORNADOES SHOULD EXIST ON D5 AHEAD OF THE
DRYLINE. AS A PACIFIC COLD FRONT MERGES WITH THE DRYLINE...AN
EXTENSIVE SQUALL LINE SHOULD FORM AND DEVELOP EWD TOWARDS THE MS
VALLEY WITH PRIMARY RISKS BECOMING DAMAGING WINDS AND TORNADOES ON
D6. PRIOR TO D5...A LOCALIZED BUT ENHANCED RISK FOR VERY LARGE
HAIL/FEW TORNADOES SHOULD EXIST NEAR THE DRYLINE/WARM FRONT
INTERSECTION EXPECTED TO BE INVOF NWRN KS ON MON EVENING.
..GRAMS.. 04/05/2013

Its that time of the year to really start paying attention to the weather for those of you who live in Tornado Alley. Please keep abreast of  your local weather conditions via these links-

What affects will the storm have on New Mexico... 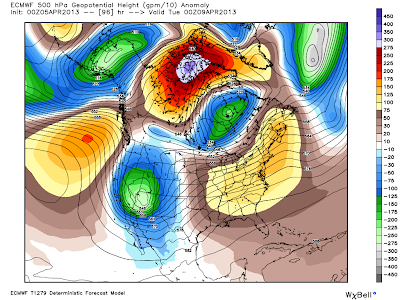 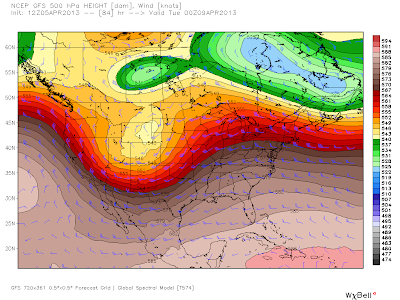 Both the European and the U.S. GFS forecast models pretty much agree that a strong upper-level trough of low pressure will be digging southward into the Great Basin late this weekend. By Monday both models are forecasting a strong closed upper-level low to form, but where? Last nights 00Z run of the European (ECMWF) model places the center of the low over northern Arizona by 6 PM MDT Monday. This mornings 12Z run of the GFS models has the center of the low over southeastern Wyoming by 6 PM MDT Monday. That's a huge difference in location between the two models. 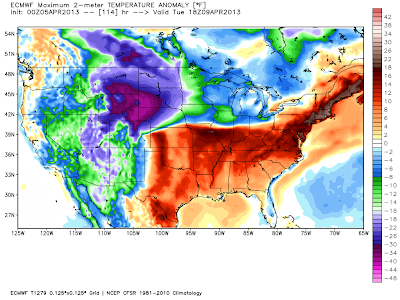 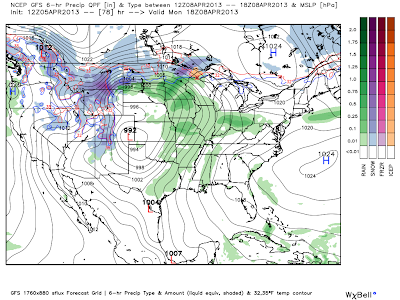 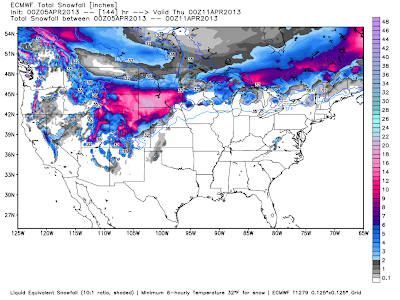 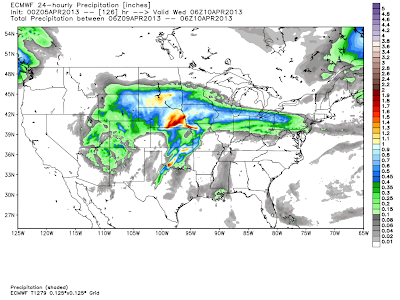 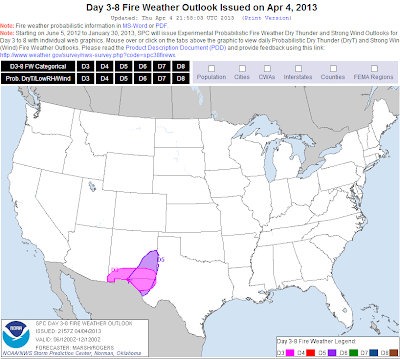 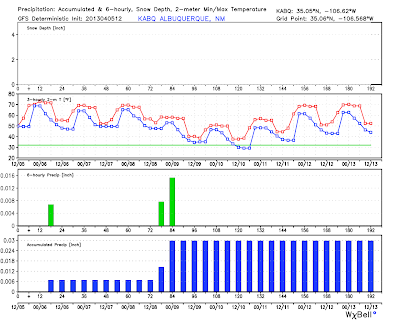 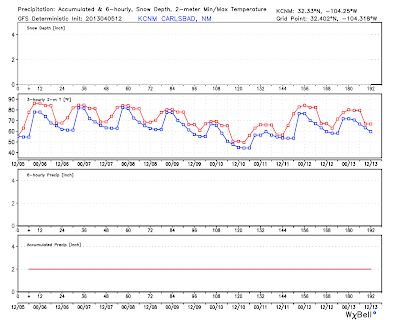 A combination of high winds, areas of blowing dust, along with extremely dangerous fire weather conditions will return to New Mexico early next as the next winter-like storm barrels into the area. Some areas of northern and northeastern New Mexico may also see snow, not to mention colder weather too.

It would also be prudent to keep an eye on the dryline...just in case it gets pulled westward into eastern New Mexico and lights up with severe thunderstorms early next week.