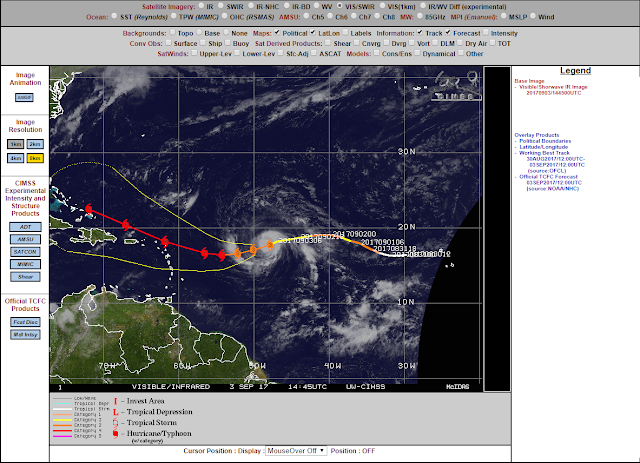 Valid At 8:45 AM MDT This Sunday Morning. 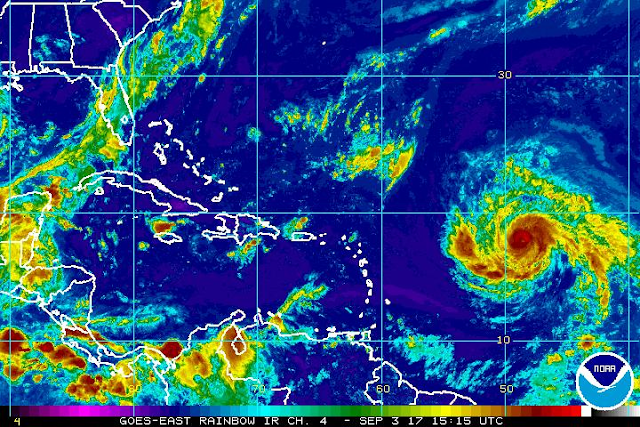 Valid At 9:15 AM MDT This Sunday Morning. 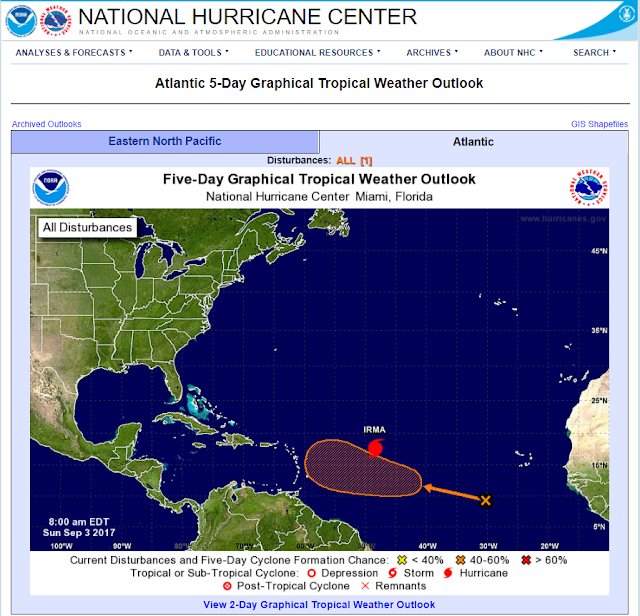 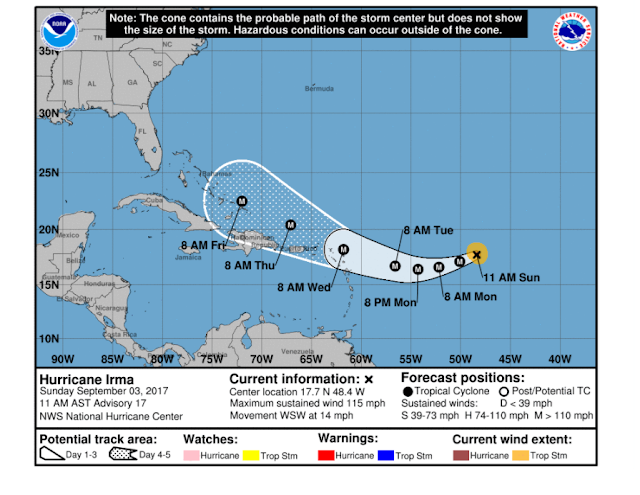 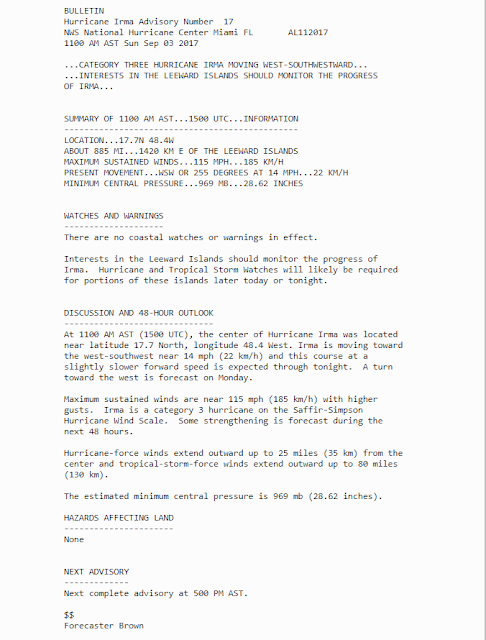 At 9 AM MDT this Sunday morning Category 3 Hurricane Irma was located about 885 miles east of the Leeward Islands and was moving to the west-southwest at 14 mph. Irma had sustained winds of 115 mph with gusts near 140 mph. Her central pressure was 969 millibars or 28.62 inches of mercury.

How Strong Will Irma Become? 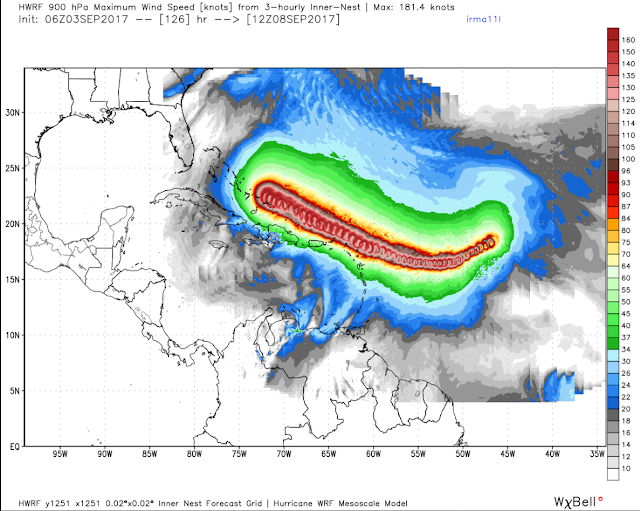 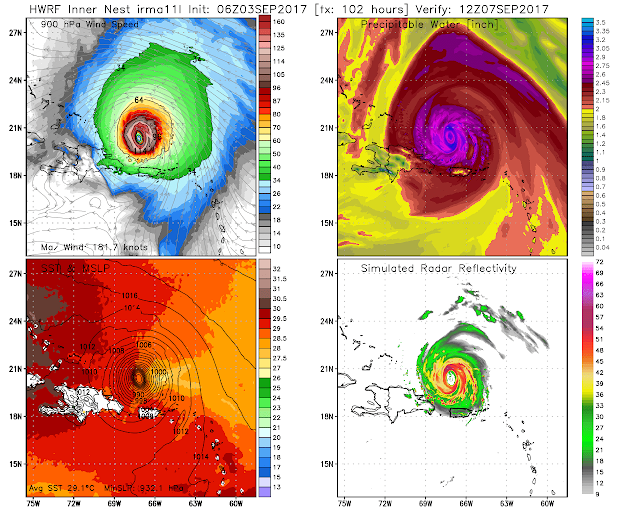 Last nights midnight mdt run of the HWRF model was scary to say the least as far as her forecast wind speeds go. This model run had sustained winds in Irma of  around 181 knots or 210 mph at the 900 millibar level by next Thursday (Sept 7th) just north of Puerto Rico. 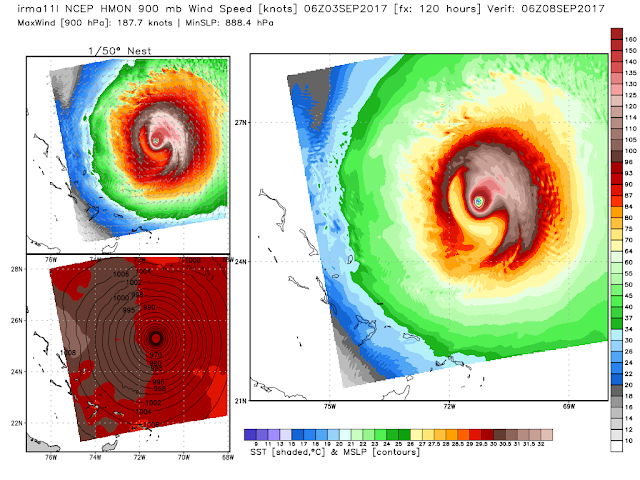 Last nights midnight mdt run of the NECP HMON model had a similar forecast as the HWRF model with Irma a little further to the northeast by next Thursday. With sustained winds of 188 knots at the 900 millibar level or 215 mph.

That would be remarkable should these forecast verify or come true. There is the potential for Irma to become one of the strongest if not the strongest Hurricanes recorded in the Atlantic Basin (since 1851). Note the U.S. GFS model (shown below) bombs Irma's central pressure down to 889 millibars or 26.28 inches of mercury while she is off the coast of Florida next Sunday (Sept 10th). With sustained winds of 160 knots or 185 mph. 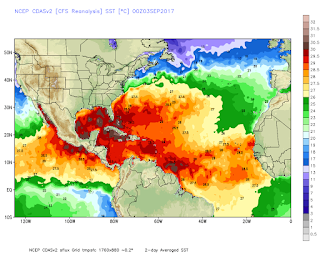 Irma will be moving over warmer waters over the next few days so additional strengthening is likely. But just how strong will she become? 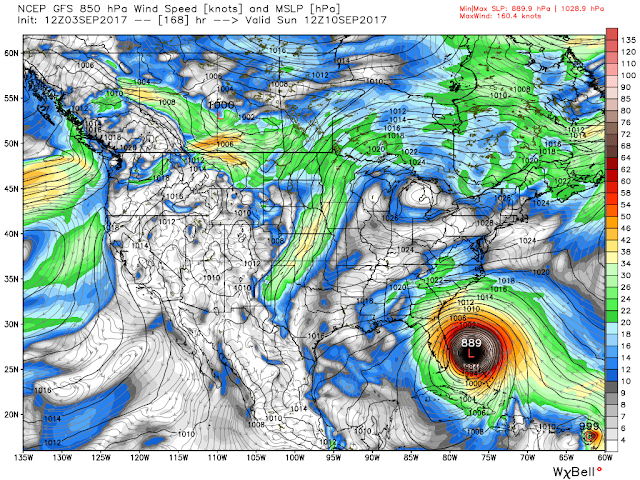 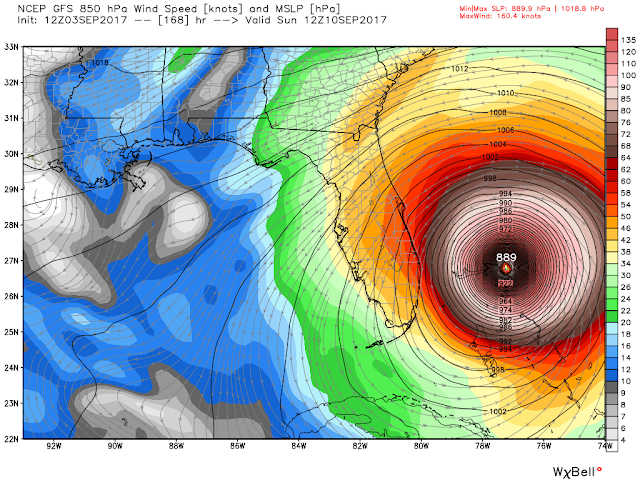 Given that Hurricane Irma has a long way to go before she becomes an immediate threat to the U.S. mainland...if she ever is. Use these forecasts with a great deal of caution. At this point and time trying to pin Irma's exact location and strength down a week away is more speculation than reality. The trend in the models and the ensembles though is showing more and more of a possible threat to the Eastern U.S. seaboard in a week to ten days from now.

The Great Hurricane Of The Antilles.
(October 1780).

A powerful Hurricane known as the "The Great Hurricane of the Antilles" killed an estimated 22,000 people (most of the sailors) between October 10th-16th in 1780.

The Great Hurricane of 1780, also known as Huracán San Calixto, the Great Hurricane of the Antilles, and the 1780 Disaster,[1][2] is the deadliest Atlantic hurricane on record. Between 20,000 and 22,000 people died throughout the Lesser Antilles when the storm passed through them from October 10–16.[3] Specifics on the hurricane's track and strength are unknown because the official Atlantic hurricane database only goes back to 1851.[4]
The hurricane struck Barbados with winds possibly exceeding 320 km/h (200 mph)[citation needed], before moving past Martinique, Saint Lucia, and Sint Eustatius; thousands of deaths were reported on the islands. Coming in the midst of the American Revolution, the storm caused heavy losses to British and French fleets contesting for control of the area. The hurricane later passed near Puerto Rico and over the eastern portion of Hispaniola. There, it caused heavy damage near the coastlines. It ultimately turned to the northeast and was last observed on October 20 southeast of Atlantic Canada.
The death toll from the Great Hurricane alone exceeds that of many entire decades of Atlantic hurricanes. Estimates are marginally higher than for Hurricane Mitch, the second-deadliest Atlantic storm, for which figures are likely more accurate. The hurricane was part of the disastrous 1780 Atlantic hurricane season, with two other deadly storms occurring in October.[3]
The exact origin of the hurricane is unknown but it probably developed, as do many hurricanes, in the east Atlantic Ocean off the Cape Verde Islands in early October. The system strengthened and expanded as it tracked slowly westward and first began affecting Barbados late on October 9. Late on October 10, the worst of the hurricane passed over the island. Early on October 11, the hurricane turned north-northwest about 90 kilometres (56 mi) east of Saint Lucia, and later that night it neared the island of Martinique. The cyclone gradually weakened as it passed to the southwest of Dominica early on October 12 and subsequently struck the island of Guadeloupe.[2]
After hitting Guadeloupe, the hurricane turned west-northwest, passing about 145 kilometres (90 mi) southwest of Saint Kitts. The hurricane steadily neared Puerto Rico as it paralleled the southern coastline, and on October 14 made its closest point of approach, to the southwest portion of the island. It subsequently turned to the northwest, hitting the island of Mona in the Mona Passage before making landfall near the present-day Dominican Republic province of Samaná. Late on October 15, it reached the Atlantic Ocean and after passing about 260 kilometres (160 mi) east of Grand Turk Island; it is estimated to have recurved to the northeast. The hurricane passed 240 kilometres (150 mi) southeast of Bermuda on October 18,[2] and was last observed two days later about 475 kilometres (295 mi) southeast of Cape Race, Newfoundland, Canada.[5]
On October 19, strong winds and high tides were reported in the British province of East Florida (the northeastern portion of present-day Florida). One modern historian suggests the hurricane passed much closer to the province than previously thought. Another possibility considered was an extension to a hurricane in the western Caribbean Sea. Because of lack of data, the exact track of the Great Hurricane is unknown.[6]
The Great Hurricane first began affecting Barbados with rain late on October 9. Northwesterly winds increased through the day on October 10.

"... a dreadful hurricane which began to rage with great fury at noon and continue with great violence till four o'clock the next morning, the 11th; At eight o'clock at night St. Thomas's parsonage was demolished and the church where the Rector and his family saought shelter began to fall about two hours after, the Chancel fell while the family were in the church ... St. Thomas's Chapel, St. Michael's, St. George's, Christ Church's and St. Lucy's churches were totally destroyed, the other churches were severely‘injured’ (except St. Peter's and St. Philip's). Because of the demolition of the parish church and chapel ‘divine services’ continued in the ‘boiling house’ at the ‘Rock Hall’ estate of Thomas Harper by Rev Wm Duke and curate Hugh Austin of St Thomas. Most other buildings and works were blown down and many lives were lost. The dead could not be brought to a church so were buried in gardens and private land.”[7]

The ships in the bay broke their moorings by 4 pm, and the "full impact" arrived by 6 pm. The wind gradually backed to westerly through the night and peaked at midnight. Wind speed returned to normal by 8 am on October 11.[2] These winds suggest that the eye of the storm passed north of Barbados. The hurricane produced violent winds "so deafening that people could not hear their own voices." The hurricane stripped the bark off trees and left none standing on the island.[2] Even the strongest hurricanes do not strip the bark off trees, and Cuban meteorologist José Carlos Millás estimated that this phenomenon would require rain and winds over 200 miles per hour (320 km/h).[8] The winds also destroyed every house on Barbados. The hurricane also destroyed all forts on the island.[2] According to British admiral George Brydges Rodney, 1st Baron Rodney, the winds carried their heavy cannons aloft 100 feet (30 m). About 4,500 people died on Barbados.[8]
In Saint Vincent, the hurricane destroyed 584 of the 600 houses in Kingstown. At Grenada, 19 Dutch ships were wrecked. On Saint Lucia, rough waves and a strong storm tide struck the fleet of British Admiral Rodney at Port Castries, with one ship destroying the city's hospital by being lifted on top of it. The hurricane destroyed all but two houses at Port Castries, and throughout the island about 6,000 perished.[2]Among the ships lost from Rodney's fleet were the frigates HMS Phoenix wrecked on the Cuban coast, and HMS Blanche which disappeared without a trace, the sixth rate frigates HMS Andromeda and HMS Laurel which were wrecked on Martinique with heavy loss of life and five other smaller vessels either wrecked or foundered. By far the worst losses in the British fleet however were among the squadron of Rear-Admiral Joshua Rowley, which was caught at sea by the hurricane off the San Domingo coast. Ships of the line HMS Thunderer which foundered with all hands, and HMS Stirling Castle which was smashed on the coast with fewer than 50 survivors, were lost and the remaining six ships were all severely damaged.[9]
A fleet of 40 French ships involved in the American Revolutionary War capsized as a result of the hurricane off Martinique; about 4,000 soldiers drowned. Among the French losses was the frigate Junon.[10] The hurricane produced a 25-foot (7.6 m) storm surge on Martinique, destroying all houses in Saint-Pierre; 9,000 died on the island. High winds, rains, and storm surge caused severe damage at Roseau, Dominica. A storm surge also struck the south coast of Guadeloupe and caused considerable damage. Strong winds affected Antigua and Saint Kitts, and in the latter island, many ships were washed ashore. A Dutch sea-officer whose ship was blown from St. Eustatius to Martinique by the hurricane reports on the damage in Saint-Pierre (Martinique), St. Vincent and St. Lucia. On his return to St. Eustatius he reports that here "too some houses are destroyed" and the sea water ruined the merchandise that was left on the beach. However, he says that the situation was not as bad as on the French and English islands and does not speak of any dramatic death toll (Jong, C. de. Reize naar de Caribische Eilanden, 1807. p. 140).
Heavy damage was reported in southern Puerto Rico, primarily in Cabo Rojo and Lajas. Severe damage also occurred in the eastern region of Santo Domingo. The hurricane later grounded 50 ships near Bermuda. Throughout its path, the hurricane killed over 20,000 people, possibly as high as 24,000, making it the deadliest hurricane in Atlantic hurricane history.[2][3]

The Truth Is Stranger Than Fiction!
at Sunday, September 03, 2017