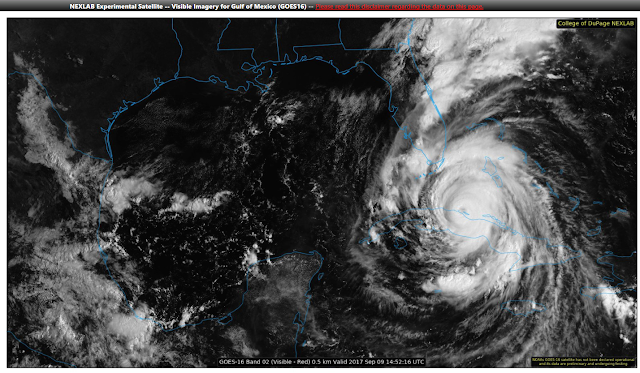 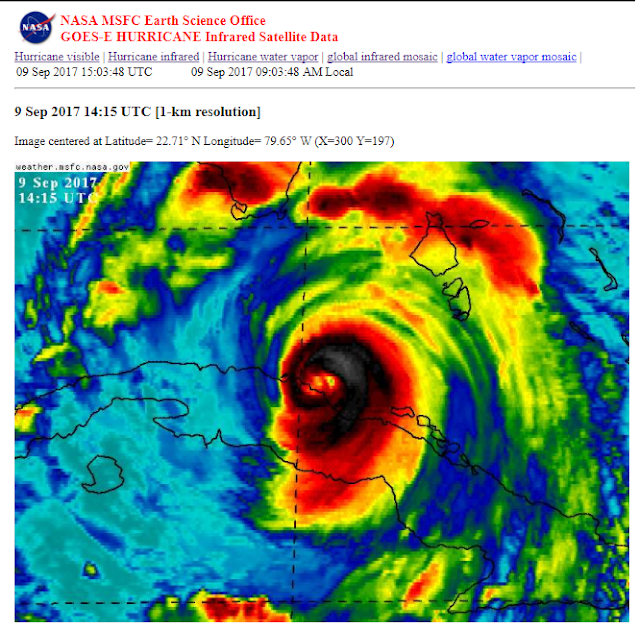 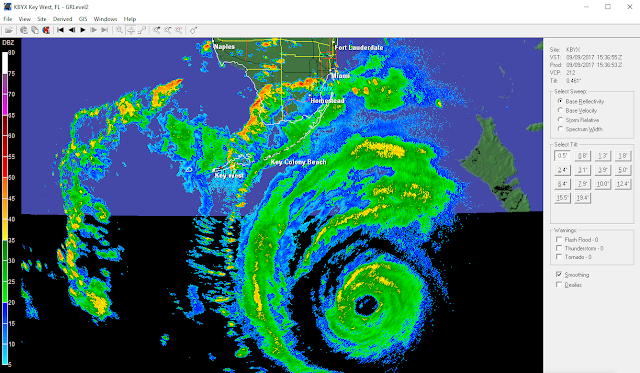 Forecast Discussion Issued At 11 AM EDt/9 AM MDT. 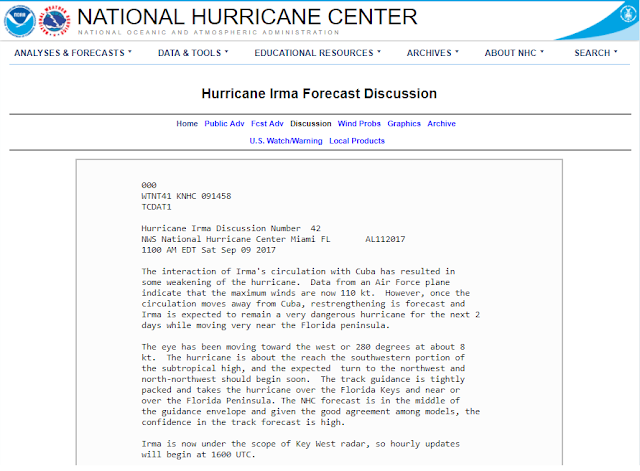 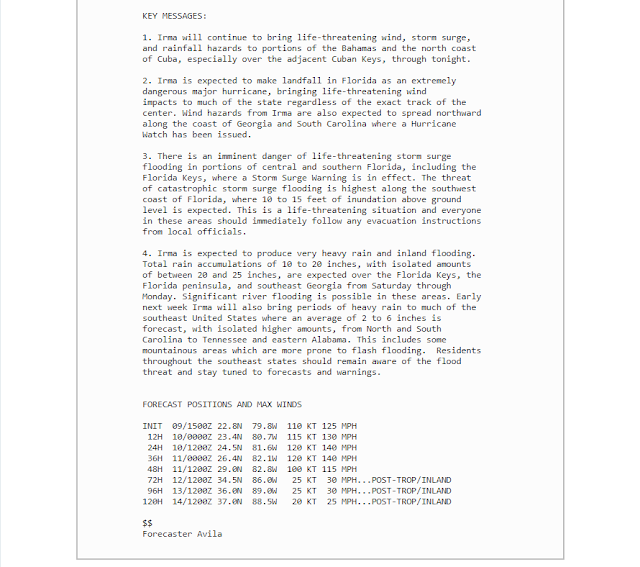 As of 11 AM EDT/9 AM MDT Irma was a Category 3 Hurricane with sustained winds of 125 mph with higher gusts to 155 mph. Her central pressure is 941 millibars or 27.79 inches of mercury. Irma is moving to the west at 9 mph and continues to hug the northern coastline of Cuba. This motion is forecast to continue throughout today with a turn to the Northwest forecast later today.

Hurricane Irma slammed into the northern coastline of Cuba overnight with sustained winds of 160 mph and gusts close to 200 mph. This made her a Category 5 Hurricane. She has since weakened back down (as has been well forecast by the National Hurricane Center and Local National Weather Service Offices) to a Category 3 Hurricane. 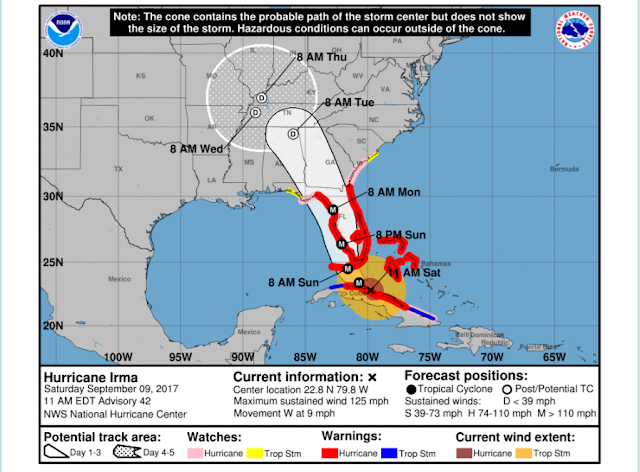 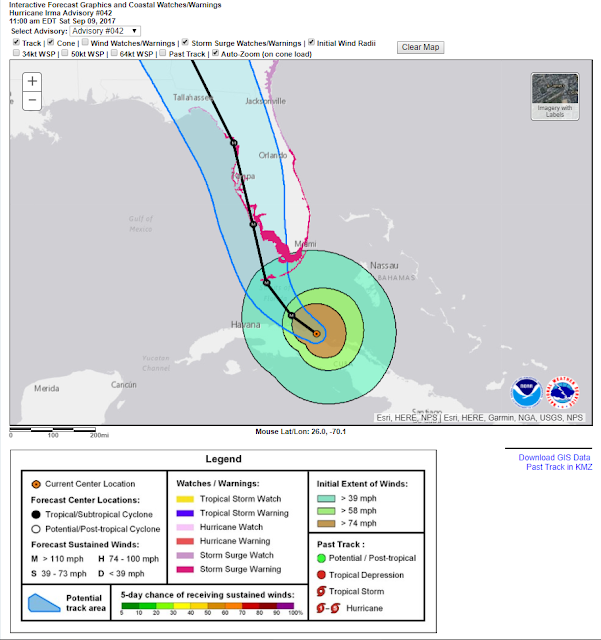 Please remember that once Irma makes that turn towards the northwest and north later today and into tomorrow she will pull away from the Cuban coastline and restrengthen. She may even undergo rapid intensification today or tonight. This is important for two reasons. First she will move away from the friction of the island nation that is causing her to weaken this morning. And once she is back over the warmer open waters she is forecast to re-strengthen back to a Category 4 and possible a Category 5 Hurricane before she makes landfall along Florida's southwestern coast on Sunday. Her slower forward movement will aide in the potential for rapid intensification.

Local Hurricane Statements Via These NWS Offices:
(Or Click On The Links Below).

My interest in Hurricane Irma is obvious with my love of weather. However it is intensely personal this morning since my wife has family living in the south and central Florida area. One of her brothers and his family lives in the Tampa Bay area. He is driving a bus this morning working with the Fire Department and Emergency Operations Center in helping evacuate people in Tampa. My wife has been on the phone all morning talking to her family in the area urging them to evacuate.

Over the next five days according to Fox News Hurricane Irma is expected to impact some 50 million people. Florida Governor Rick Scott says some 54,000+ are in shelters already across Florida. Some 6.3+ million are fleeing Irma's wrath. At least 9 million people are expected to lose power across south Florida alone. I-75 in southern Florida looks like a parking lot this morning according to local news sources. 25,000 have already lost power. Florida is under a State of Emergency.

Gas shortages in Florida continue this morning with news sources reporting that as much as half of the states gas stations have ran out of gasoline. Traffic jams continue along the states highways as people flee Irma. I've heard this morning that some 10 million people are trying to get out of harms way. 7,000 Florida National Guard Troops have been activated to help.

There are concerns this morning that some people in Florida are not taking this Hurricane serious enough and are not evacuating when they should be. Hurricane Irma is forecast to become at least a Category 4 Hurricane again today. She is forecast  produce storm surges along Florida's southwestern and western coastline in the 10 foot to 15 foot neighborhood..this could be higher is she becomes a Category 5 Hurricane!

In addition to the 130 to 155 mph or high sustained winds she is forecast to produce tornadoes and flash flooding and flooding from 10 to 20 inches of rain that will fall. The remains the possibility for a large loss of life with this storm with damages possibility reaching 1 trillion dollars by some estimates before it is all said and done.

Irma has the potential to inflict catastrophic damages and a large loss of life if people do not heed their local officials warnings to evacuate and seek better shelter. Should Irma slam into the southwestern and western coastline and plow northward along the coast the devastation she will unleash will be unlike anything most Florida residents have ever seen or experienced. Like Hurricane Harvey Hurricane Irma will be a life changing event for many!

The Tampa Bay hurricane of 1921 (also known as the 1921 Tarpon Springs hurricane) is the most recent major hurricane to strike the Tampa Bay Area. The eleventh tropical cyclone, sixth tropical storm, and fifth hurricane of the season, the storm developed from a trough in the southwestern Caribbean Sea on October 20. Initially a tropical storm, the system moved northwestward and intensified into a hurricane on October 22 and a major hurricane by October 23. Later that day, the cyclone peaked as a Category 4 on the modern day Saffir–Simpson scale with maximum sustained winds of 140 mph (220 km/h). After entering the Gulf of Mexico, the hurricane gradually curved northeastward and weakened to a Category 3 before making landfall near Tarpon Springs, Florida, late on October 25, becoming the first major hurricane to hit the area since a hurricane in 1848. The storm quickly weakened to a Category 1 hurricane while crossing Central Florida, before reaching the Atlantic Ocean early on the following day. Thereafter, system moved east-southeastward and remained fairly steady in intensity before weakening to a tropical storm late on October 29. The storm was then absorbed by a larger extratropical cyclone early the next day, with the remnants of the hurricane soon becoming indistinguishable.
The storm brought strong winds to the Swan Islands, including hurricane-force winds on the main island. Heavy rains fell in Cuba, particularly in Pinar del Río Province, but only minor damage occurred. In Florida, storm surgeand abnormally high tides caused damage along much of the state's west coast from Pasco County southward. Several neighborhoods and sections of Tampa were inundated, especially in Ballast Point, DeSoto Park, Edgewater Park, Hyde Park, Palmetto Beach, and other areas in the vicinity of Bayshore Boulevard. Strong winds also damaged hundreds of trees, signs, buildings, and homes. Four deaths occurred in Tampa, three from drownings and another after a man touched a live wire. The storm left two additional fatalities in St. Petersburg. A number of streets in Tarpon Springs were littered with masses of debris, with many structures and trees suffering extensive damage. Strong winds occurred as far east as the Atlantic coast of the state, though wind damage east of the Tampa Bay area was generally limited to downed trees and power lines, resulting in power outages, particularly in Orlando. Agriculture throughout the state experienced significant impact as well, including over $2 million (1921 USD) in damage and the loss of at least 800,000 boxes of citrus crops alone.[nb 1] Overall, the hurricane left at least eight deaths and about $10 million in damage.

After receiving reports of mass casualties and destruction at Pass-a-Grille, the American Red Cross stocked a United States Navy subchaser with pine caskets and relief supplies, but found no bodies and only a fraction of the reported damage.[15] Because of fears that the hurricane might hinder the Florida land boom of the 1920s, rebuilding and cleanup of the area commenced quickly and the land boom in the Tampa Bay region and in southern Florida continued.[29] Local officials, businessmen, realtors, and later the press soon attempted to cover up or downplay the damage, which threatened to distort Tampa's advertised image as the "Year Round City". On October 28, a writer for The Tampa Tribune stated, "Everyone is accepting the storm as an incident and all are going to work to rebuild the devastated areas, with the firm conviction that there will not be another storm of such severity during the life of anyone now living."[36] One of the destroyed buildings at the Ballist Point Pavilion was soon rebuilt after the storm. However, the building was destroyed again by fire in 1922. In 1925, a new pavilion was built.[14] On Captiva Island, the Wayside Chapel suffered extensive damage, but was repaired and reopened as Captiva School and Chapel-by-the-Sea, which has been listed as a National Historic Place since 2013. Many farmers on the island sold their land for a significantly reduced price to Clarence B. Chadwick, who would transform more than 330 acres (130 ha) of property into the South Seas Island Resort.[37]
The hurricane was the first major hurricane to strike the Tampa Bay region since a hurricane in 1848 and the most recent to date. Additionally, since this storm, only a hurricane in 1946 has made landfall in the area.[35] In the past few decades especially, local officials have been concerned about a major hurricane impacting the area due to population increases, older building codes, storm surge projections, and complacency among some residents. The combined population of Citrus, Hernando, Hillsborough, Pasco, and Pinellas counties has increased from about 135,000 people in 1921 to approximately 2.7 million by 2011.[38] In Pasco County, more than half of the homes were constructed prior to the enactment of stronger building codes in the aftermath of Hurricane Andrew.[39] A Sea, Lake, and Overland Surge from Hurricanes (SLOSH) computer model from the National Oceanic and Atmospheric Administration (NOAA) indicates that portions of Downtown Tampa would be flooded with over 20 ft (6.1 m) of water in the event of a Category 4 hurricane, while St. Petersburg would be surrounded by water.[35] CoreLogic, an international property information firm, estimated in 2016 that nearly 455,000 homes were at risk of being damaged by storm surge, with costs of property damage and repairs reaching approximately $80.6 billion (2016 USD). Another property firm, Karen Clark & Co., estimated in 2015 that storm surge could inflict as much as $175 billion (2015 USD) in damage in a worst-case scenario.[40]
The Truth Is Stranger Than Fiction!
Email Post