Hurricane Irma Will Threaten The Leeward Islands By Tuesday Night.

Visible Image At 9:45 AM MDT This Monday Morning. 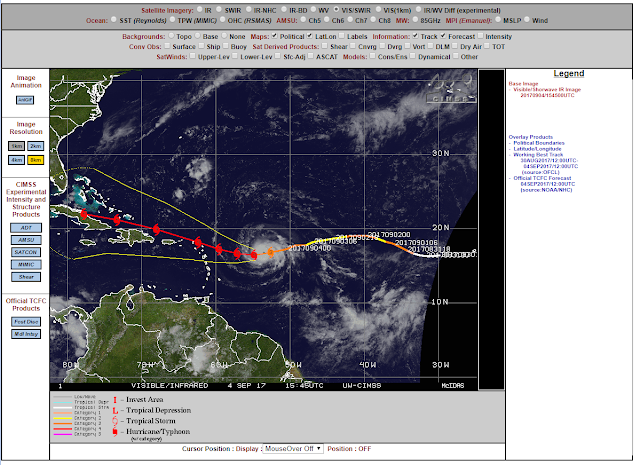 Visible Image At 9:45 AM MDT This Monday Morning. 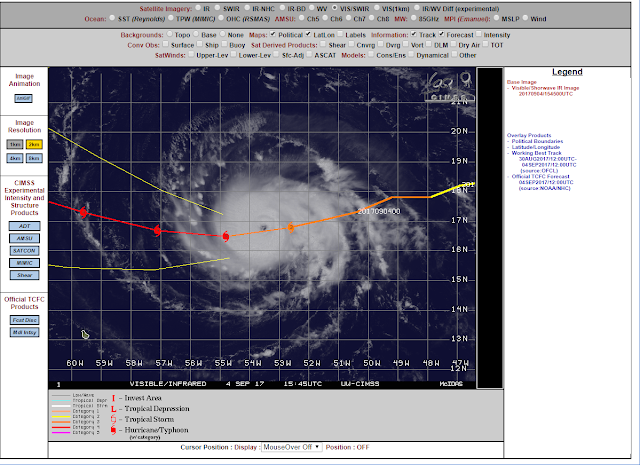 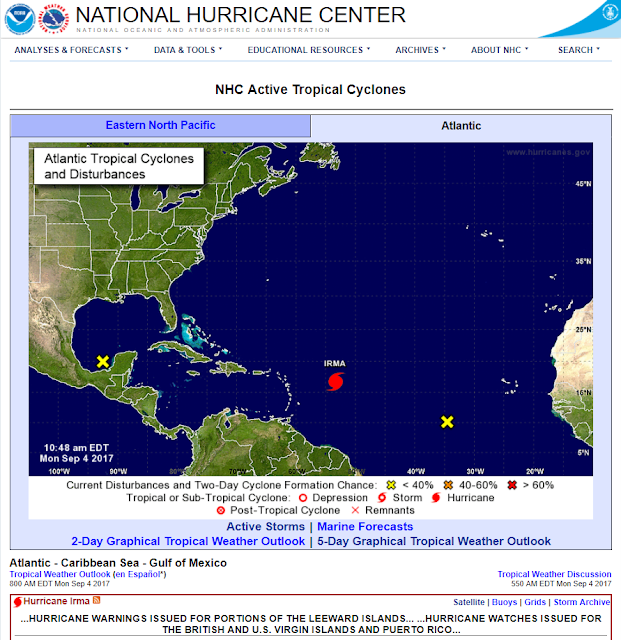 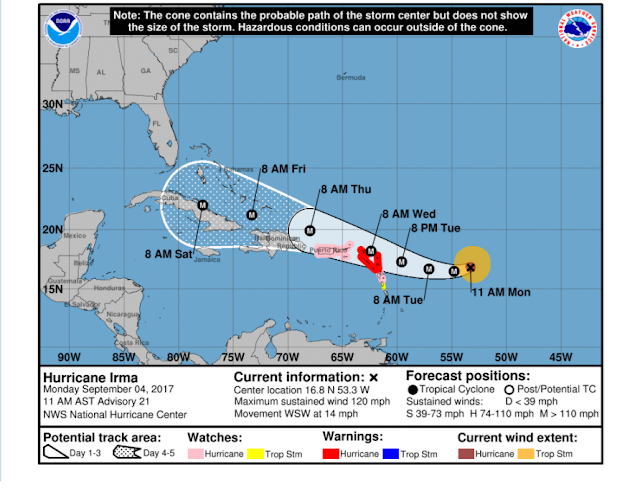 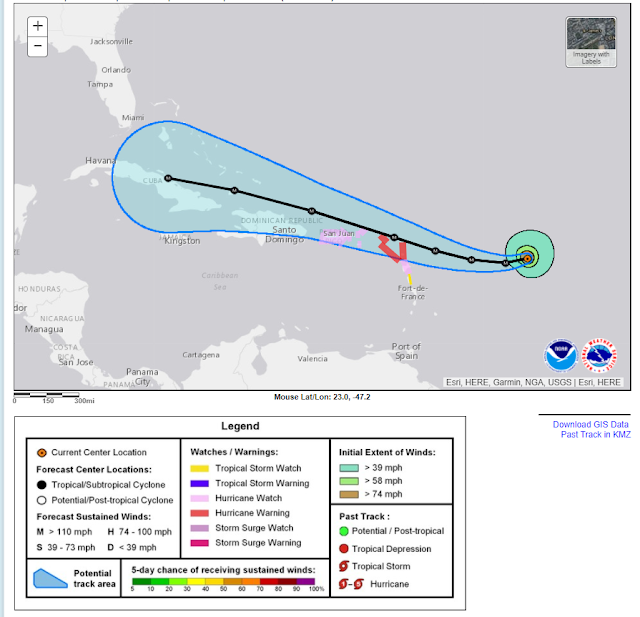 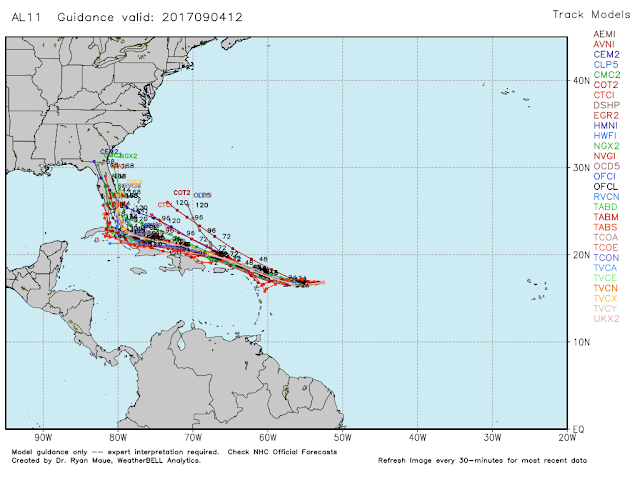 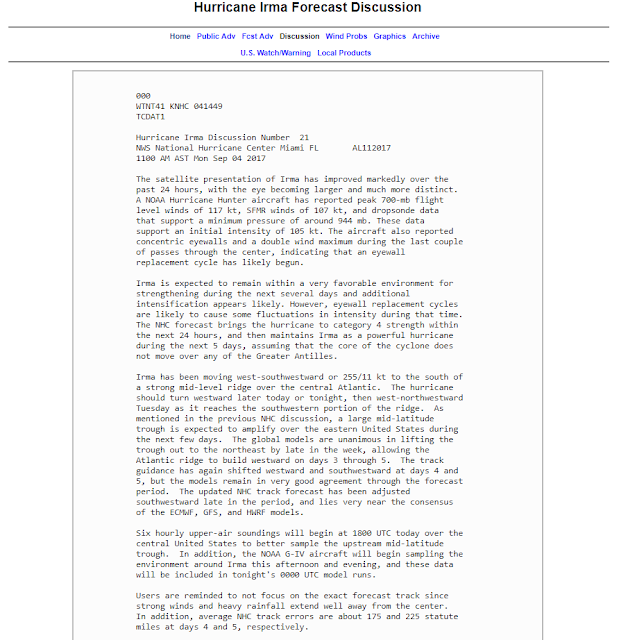 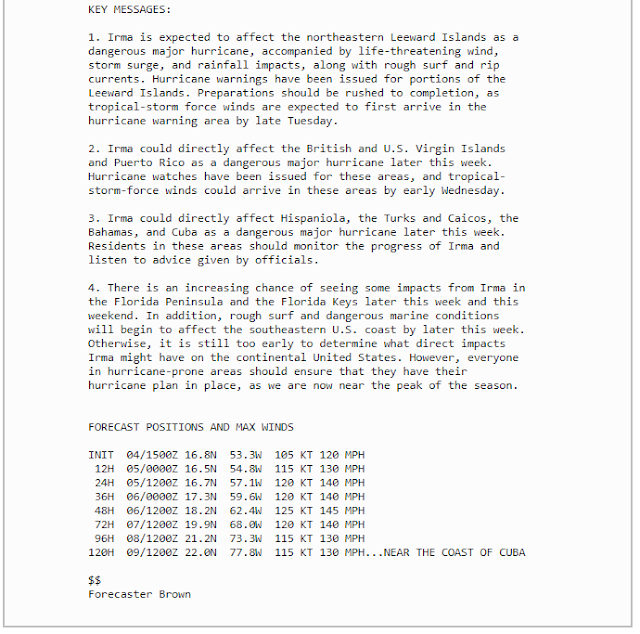 At Noon MDT/ 2 PM AST Category 3 Hurricane Irma was located about 530 miles east of the Leeward Islands. Irma continues to move to the west-southwest at 14 mph. Her central pressure is down to 944 millibars or 27.88 inches of mercury. 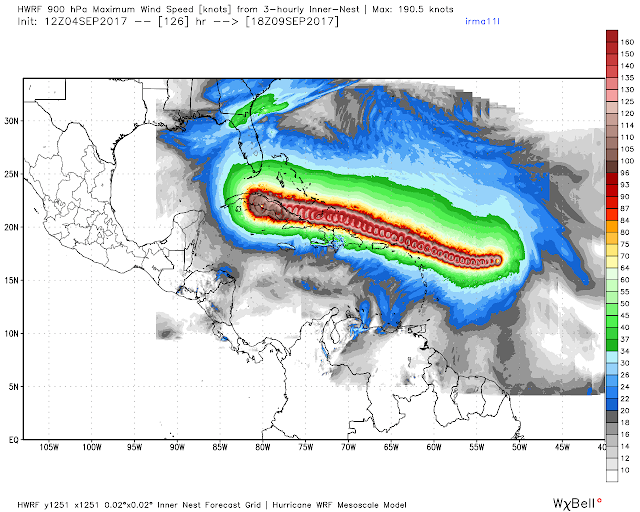 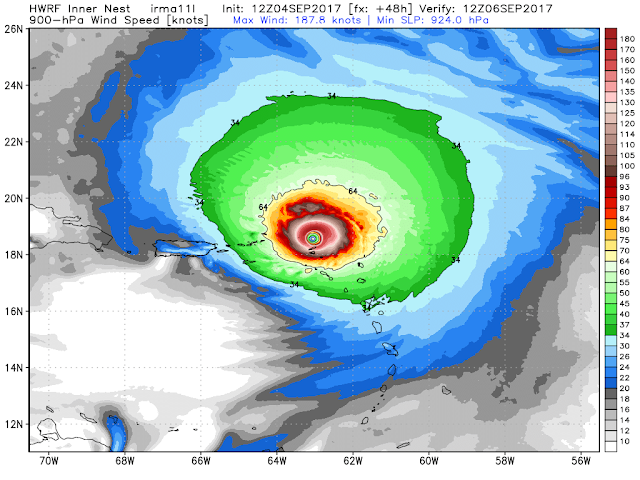 By around sunrise Wednesday morning the HWRF forecast model has Irma bearing down on the Virgin Islands with sustained winds of 215 mph with much higher gusts and a central pressure of 924 millibars or 27.29 inches of mercury. For several days now this model has been going hog wild with its forecast strength of Irma's winds and pressure. Too high on her winds and too low on her pressure many think. I hope that this is correct otherwise she is going to blow up into a monster of a Hurricane if this model and others are correct. 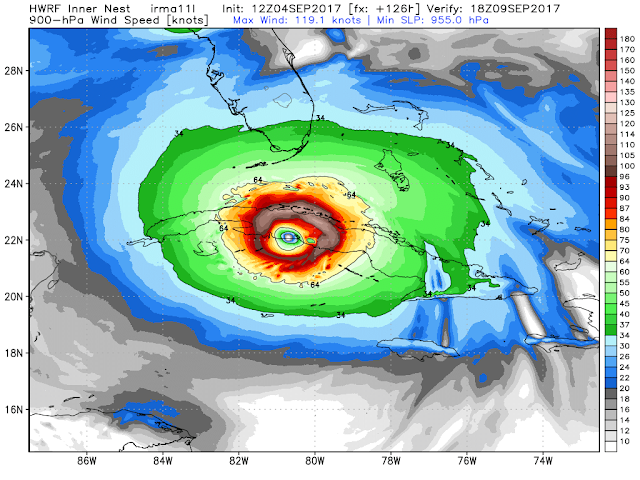 This mornings forecast from this model then takes Irma west to Cuba and by around noontime on Saturday, September 9th it has her hugging the southern coast of Central Cuba still crawling to the west.  With sustained winds of 135 mph with higher gusts and a central pressure of 955 millibars or 28.20 inches of mercury. 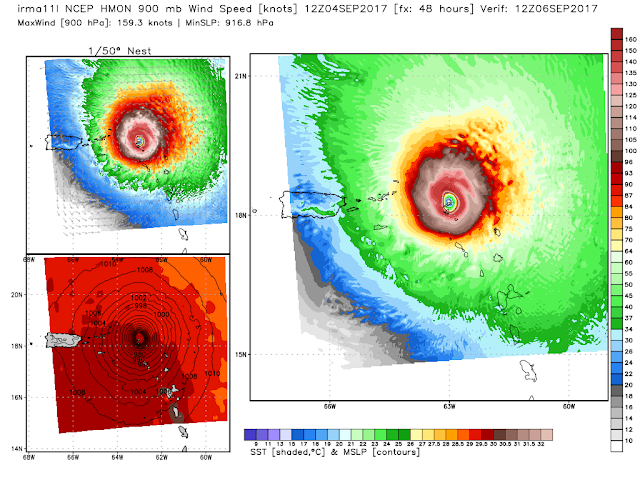 This mornings run of the new NCEP HMON forecast model is more intense than the HWRF model. By around sunrise Wednesday it brings Irma dangerously close to the U.S. Virgin Islands with sustained winds of 180 mph and a central pressure of 916.8 millibars or 27.07 inches of mercury. Crazy stuff coming out of these models for the past couple of days. This makes me wonder if they are on to something or if they are just out to lunch on the strength of Irma.

If these models verify or are correct then this could potentially place Irma in the top category for the strongest Hurricane recorded in the Atlantic Basin (1851-2017). See my blog post via this link for a reference. 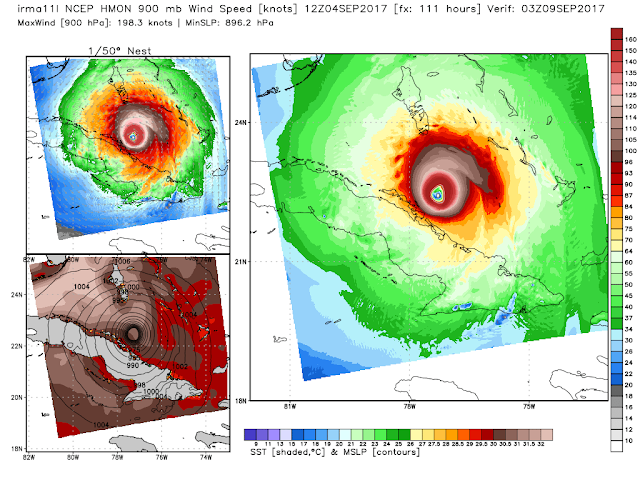 Incredibly this mornings run of the NCEP HMON model bombs Irma into unprecedented levels with sustained winds of 198 knots or 228 mph with gusts potentially reaching close to 260 mph! With a central pressure of 896.2 millibars or 26.46 inches of mercury. And located just offshore of Central Cuba by 9 PM MDT Friday, September 8, 2017. 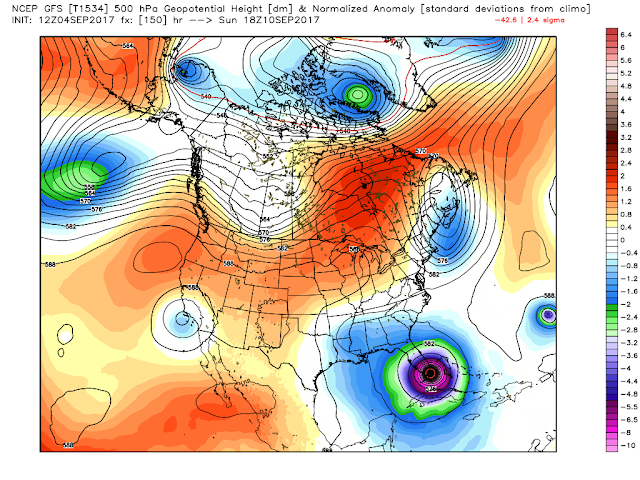 Problems are arising with the placement of the mid and upper level trough of low pressure that is forecast to dive into the central part of the nation this week and then move northeast by next weekend. The trend now is to lift the trough out to the northeast quicker as well as further to the northeast than has been forecast. At least according to this GFS forecast. The problem this creates is that it allows Hurricane Irma to track further to the south and west than has been forecast. Thus potentially becoming more of a threat to Florida by late next weekend. 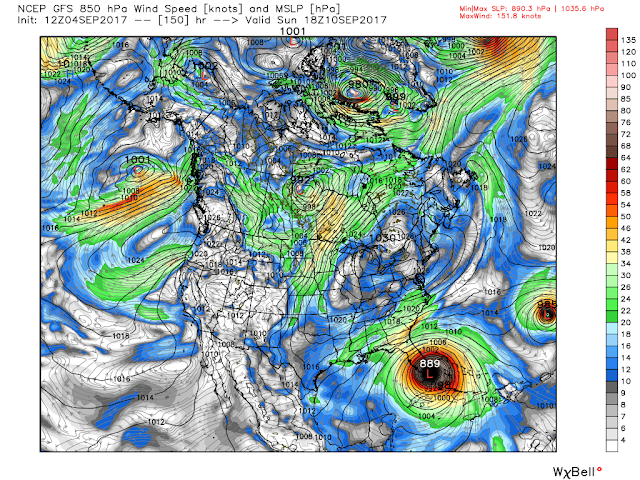 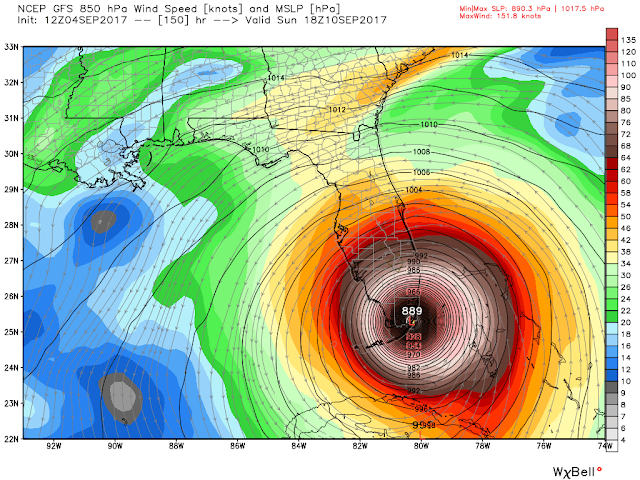 If you thought that the HWRF model was absurb in its forecasts with Irma's central pressure and winds then you won't believe how crazy the GFS has been with her. This mornings run bombs Irma out at 889 millibars or 26.25 inches of mercury with sustained winds at the 850 millibar level (5,000 feet above the surface) of 152 knots or 175 mph by Noon MDT next Sunday. South of Miami. 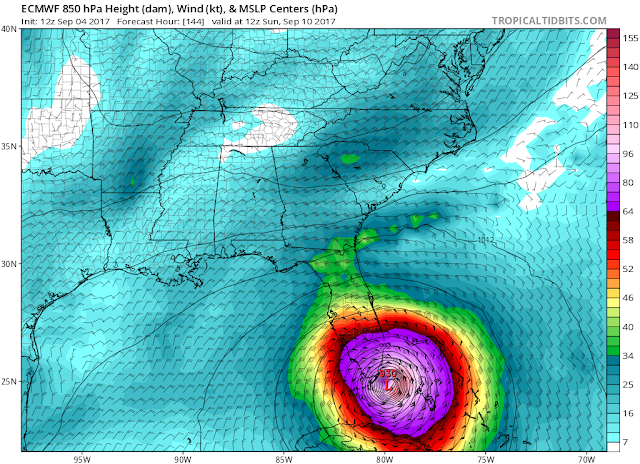 What makes the GFS forecast intriguing is that the European model (ECMWF) is following a similar forecast with Irma's location by next Sunday. Although not nearly as intense with a central pressure of only 930 millibars or 27.46 inches of mercury. And both are close to the official Hurricane model forecast tracks.

So we've been all over the place with the different model forecasts concerning Irma's pressures and winds. Simply into the land of the ridiculous. Here are some key things to remember.

1. Computer forecast models are notorious for over-forecasting and sometimes under-forecasting Hurricane strengths. Especially beyond three or four days out. So as far as Irma is concerned we are talking a week away with some of these forecasts. Chances are highly likely that some of these forecasts of her winds speeds and pressures will be wrong. So don't place a lot of stock in the exact strength that some of these models are depicting this far out in time. Use them as a guide and with a huge grain of salt.

2. The models have been consistently bending her track further to the west and south the past couple of days. This obviously is very worrisome. Because they now bring Irma dangerously close to the Leeward and Virgin Islands, Puerto Rico, Cuba, and possibly Florida.

3. Longer range forecasts bring Irma across southern Florida and then take her inland into central Florida then back out to sea and up the southeastern U.S. Seaboard. With a second landfall possibly in the Carolina's. But that's getting way out there beyond a week from now so I don't put a lot of stock in that this far out in time.

4. What I get from the models is that Hurricane Irma has the potential to become a Category 4 or 5 Hurricane. Just who she terrorizes is a bit up in the air yet. But anyone within her path over the next week should be prepared for this Hurricane, especially later next weekend, when she may impact Florida and nearby areas.

5. The National Hurricane Center is doing an excellent job of sampling Irma with their Hurricane Reconnaissance missions. Special upper air soundings are being called for to get a better analysis of the atmosphere and the forces that will be steering Irma over the next week. They are a lot of unknowns right now but hopefully the models settle down this upcoming week and we can get a better idea of where Irma will be headed and how strong she will become.