Is There Potential For A Significant Flash Flood Event Over The Next Week? 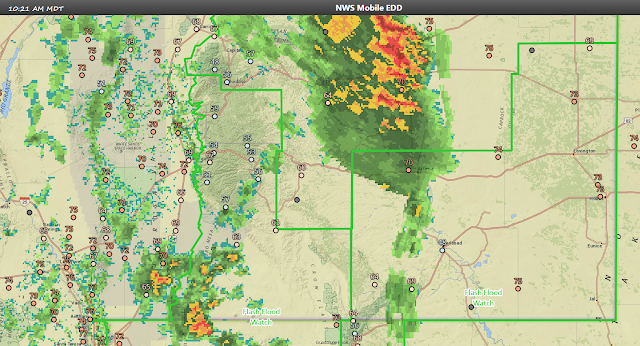 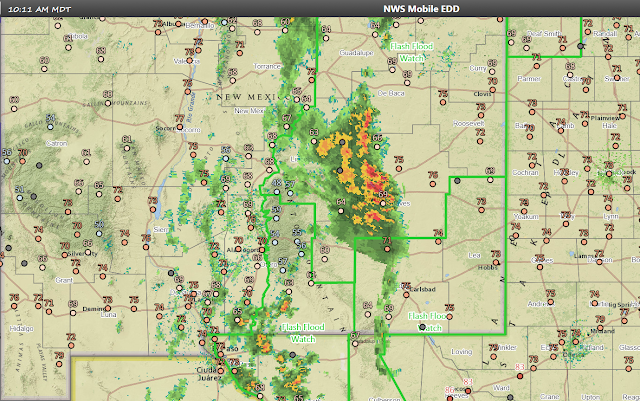 Regional radar has began to come alive as of 10 AM this morning. Selected local reported rainfall totals as of 10:20 AM are listed below. 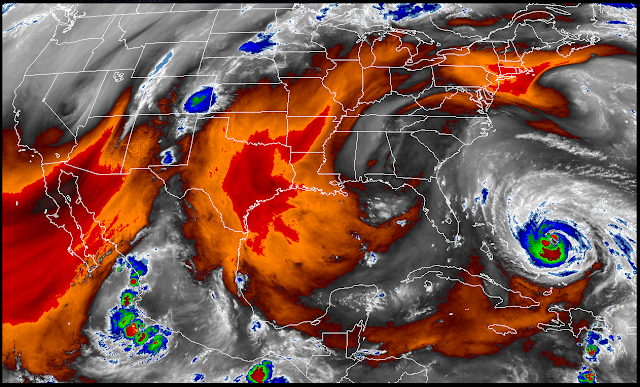 This image is used to show the moisture that is available in the atmosphere to produce clouds and precipitation. These are not clouds but a color scheme to determine moisture content. The oranges and reds represent drier air while the grays, whites, greens, blues, and reds within them represent different levels of moisture. So we can see the current blob of thunderstorms blowing up over SE NM depicted as the blue blob. Abundant mid and high level subtropical and tropical moisture is streaming northward from the tropical disturbances located south of Acapulco, Mexico and into our region.

Current US Temperatures At 10 AM MDT. 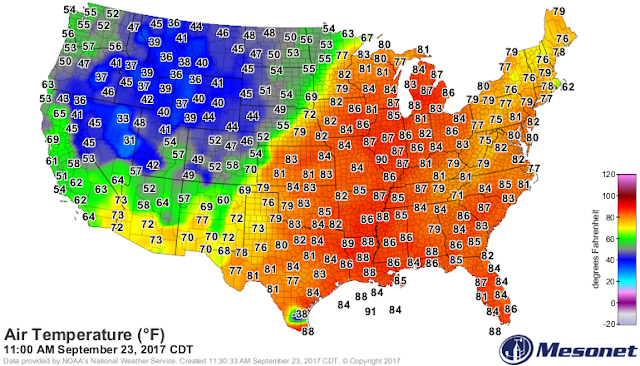 Fall is definitely underway over much of the Western U.S. this morning with many stations reporting temps in the 30's and 40's as of 10 AM MDT. 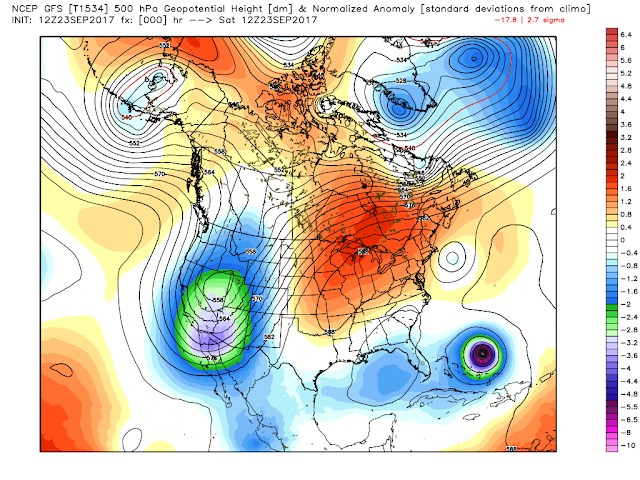 Valid At 6 AM MDT This Morning. 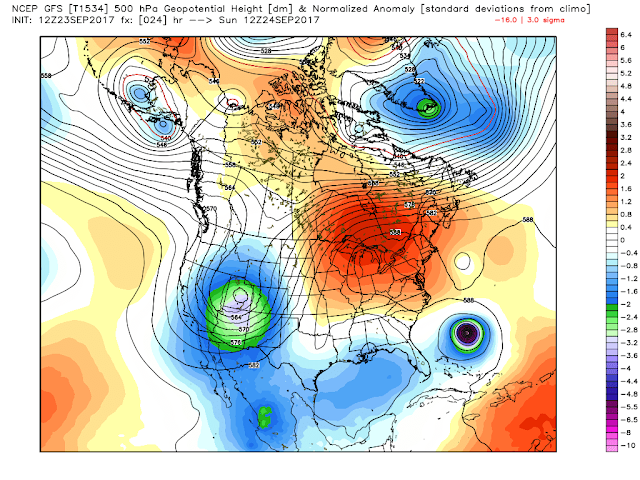 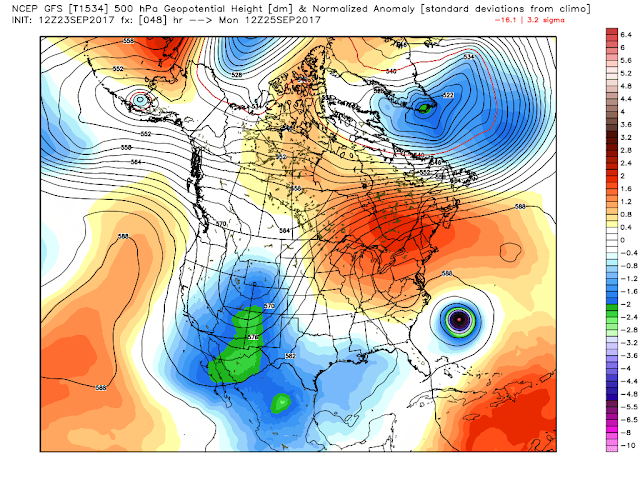 Valid At 6 AM MDT Monday. 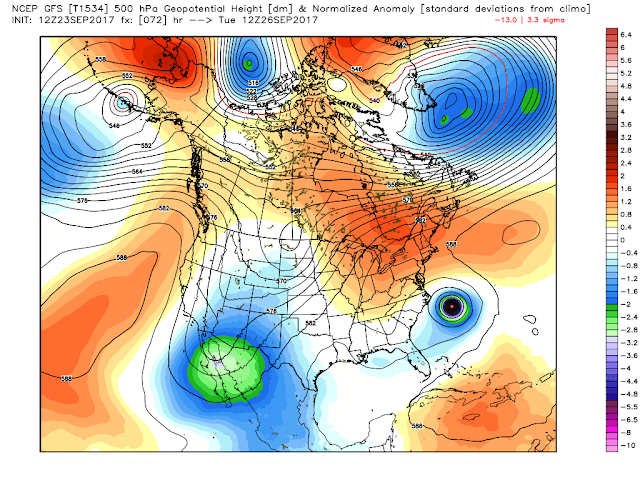 Valid At 6 AM MDT Tuesday.

Early this morning a deep and cold mid and upper level trough of low pressure was centered over Nevada and was still slowly sinking southward. Most of the models agree that this trough will split over the Four Corners Region by Monday with a piece of it lifting out to the northeast while another piece of the trough settles southward into northwestern Mexico. Some of the models form a cut off low in this area and meander it around for the better part of next week. This is important because if this happens then we will likely be facing a week long period of prolonged rainfall. More so if the tropical disturbances south of Acapulco  strengthen into Tropical Storms or Hurricanes and the cut off low funnels that moisture northward into our area. 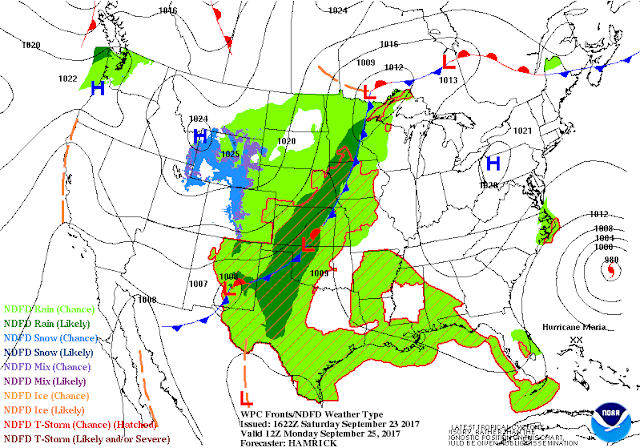 Valid At 6 AM MDT Monday.

To complicate matters even more so lets drop the seasons first strong cold front into the area Monday. This will act as a focus for thunderstorms to fire up along and near as will provide additional instability in the atmosphere. Bottom line is that the potential for heavy to very heavy rainfall will occur today into the end of next week. 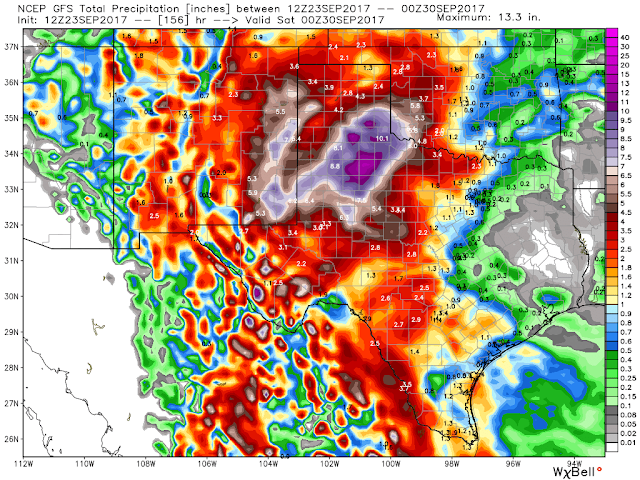 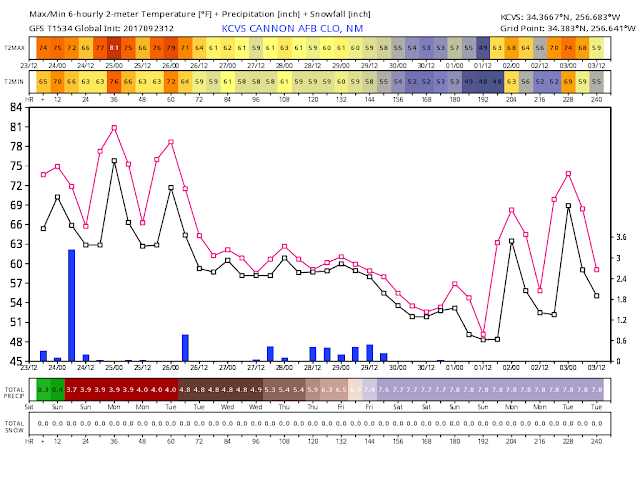 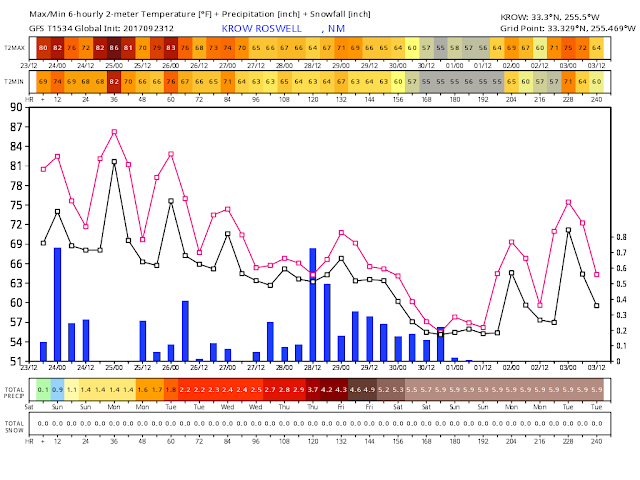 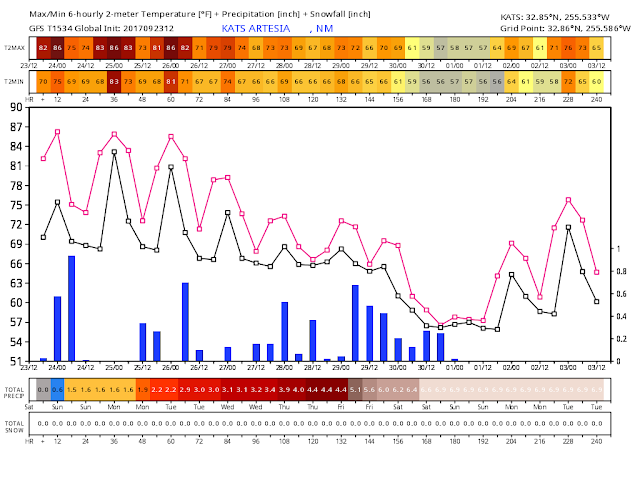 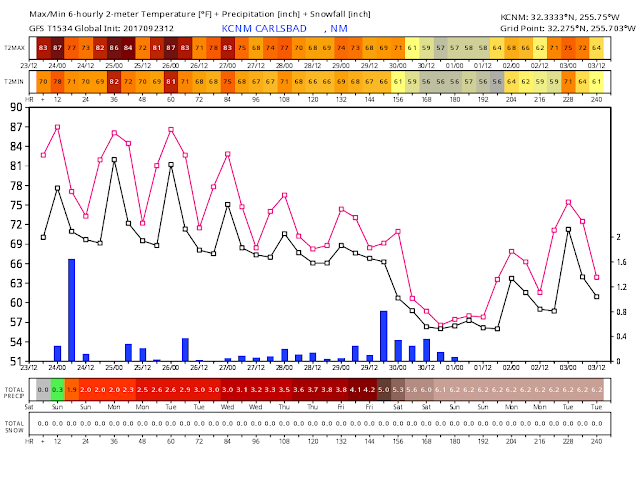 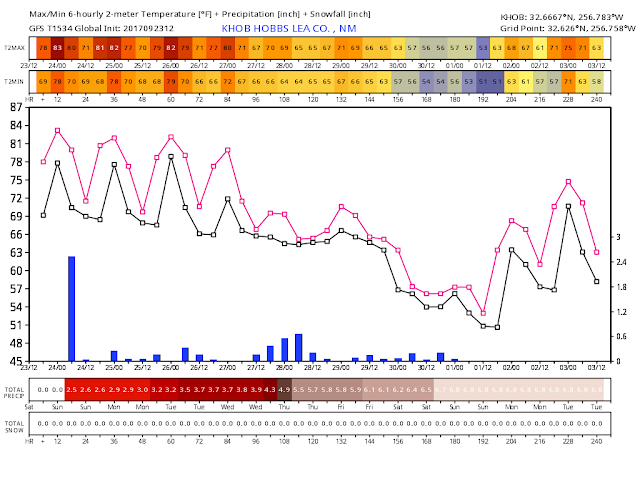 This would help explain why the GFS model has been kinda of nutas for a couple of days now in forecasting excessive rainfall totals for Eastern and Southeastern New Mexico and parts of West Texas. For the Pecos Valley (Roswell-Artesia-Carlsbad), and also the Clovis and Hobbs areas, this mornings run is hammering us with storm totals of 5" to 8". 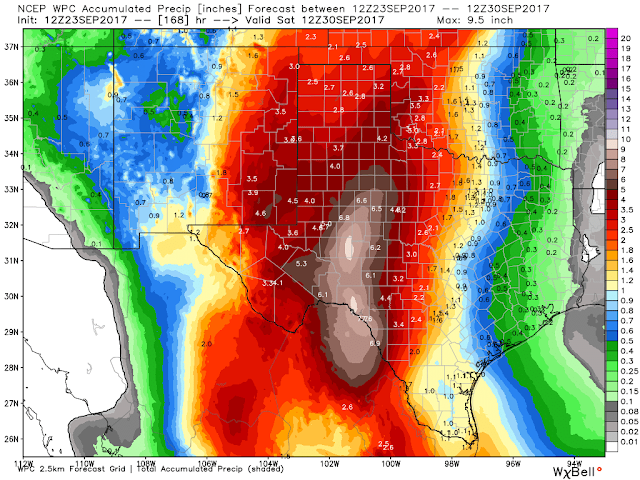 Storm total rainfall forecast over the next 7-days from the Weather Prediction Centers model back the GFS up giving our local area 3" to 5". Although its forecast locally isn't as aggressive as the GFS model forecast it too is hinting at a significant period of heavy to excessive rains. Check out the large area of 5" to 10" across West Texas from the Big Bend northward to the Midland and San Angelo areas. 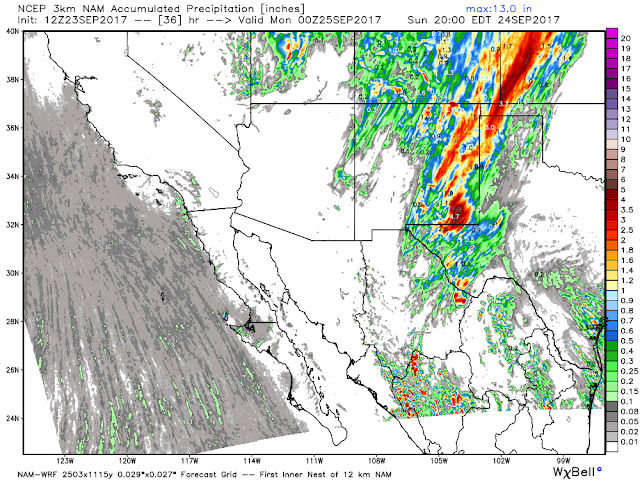 Looking at the medium range models this mornings run of the NAM-WRF also a little crazy with its storm total forecasts of 2" to 5 or 6" across the Pecos Valley from today into Sunday afternoon. That would spell big trouble as far as flash flooding is concerned should this forecast be correct! Generally speaking anytime you have rainfall totals locally in the 2 inch or more range then flash flooding occurs...especially if this happens in less than a hour.

Good Reason To Be Concerned!

Within the past five years or so literally thousands of new residents have moved into Southeastern New Mexico and parts of the West Texas area. Mainly due to the boom in the oilfield. Most of these folks more than likely aren't that well acquainted with the crazy nature of our local weather and how it goes from one extreme to another. Normal is going from droughts to floods. Sometimes within the same year. We've gone as long as 20 years without a major flash flood event and then on the other hand we've had years where we have had several flash floods within days or weeks of each other.

Flash flooding occurs in this country whenever heavy rains occur in a localized area over a short period of time such as an hour or two. Usually this means more than an inch or two of rain in an hour. When you have several days of heavy rain or a week of heavy rains over a widespread area then this problem becomes bigger and more concerning. Hundreds of normally dry arroyos lace the countryside and many may not flood for years at a time. When they do they are deadly. Often they overflow their banks and the flood waters within can range from a few feet deep to over 20 feet deep.

Flash flooding is especially dangerous at nighttime when its impossible to determine the depth of the flood waters in these arroyos, low spots, streets, intersections, and small creeks and streams. Never attempt to walk across or drive across one of these flooded areas. Sadly we also have a history of this occurring sometimes with tragic results. High water rescues become quiet common believe it or not and not just within these flooded arroyos but in some of flooded city streets.

With the computer forecast models agreeing that a prolonged heavy to very heavy rain event will occur across the area today into the end of next week it would be wise to understand the hazards associated with this. New Mexico and especially Southeastern New Mexico has a long history of flash flood events some of which have been historic for our area. This includes the flash flooding that occurred in September of 2013 and again in September of 2014.

How Bad Is Bad?

Will the flash flooding that occurs over the next week be as bad as these past events...I hope not. But I am very concerned that we are setting up for a significant widespread flash flood event across the area. Rare is the time that the computer forecast models agree with their consecutive model to model runs (every 6 to 12 hours they put out a new forecast) or with each other. Such is the case now and this bothers me.

Stay tuned and check my web page often for the latest details.

A mind blowing 15.76" of rain fell at the Pine Springs automated weather station from Sept 9th through Sept 13th, 2013. In just 12 hours during this time frame 13.62" of rain fell which produced widespread major flash flooding in the Dark Canyon, Black River, and Delaware Watersheds. The normally Dark Canyon Arroyo flood gauge in Carlsbad registered a flood depth of 14 feet.

Record/Historic flash flooding occurred in the Dark Canyon Arroyo that runs through the heart of Carlsbad, New Mexico Sunday night just before midnight. The flood gauge water depth in the arroyo peaked at 21.62 feet. This is the second highest depth ever measured in the arroyo. This depth is second only to the August 23, 1966 record of 22.00 feet. At the peak depth Sunday night the water was raging down the arroyo at an incredible 92, 700 cubic feet a second (cfs). I'm not sure but this may be the highest flow on record, if not the second highest. Its believed that an estimated 100,000 cubic feet a second occurred in Dark Canyon during the flash flooding in September 1941.

There was a great deal of concern that the flood waters were going to top the Canal Street bridge near La Tienda Grocery Store in Carlsbad Sunday night...and with good reason. The flood waters came to within a foot from the bottom of the bridge of doing this.

Two week storm total rainfall amounts have exceed 20.00 inches in parts of Eddy County. Here at my home in northwest Carlsbad I measured 8.47" over the past two weeks. Bringing my September month to date total to 9.68", and my year to date total to 15.48".