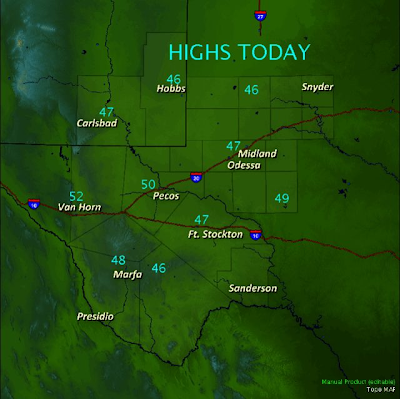 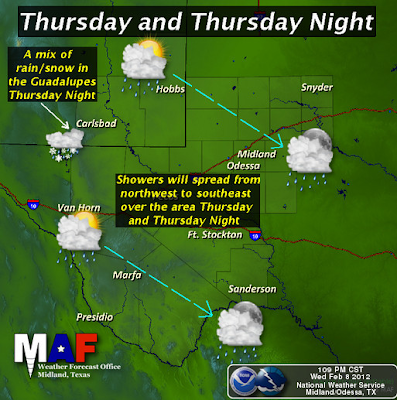 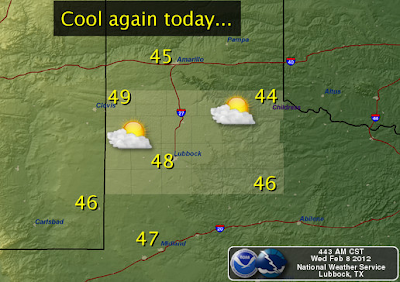 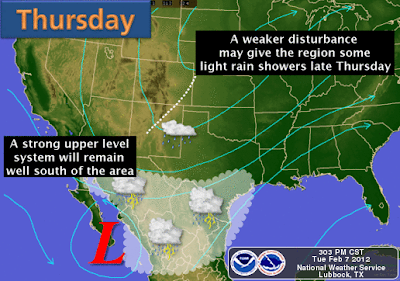 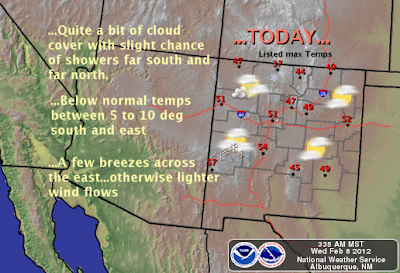 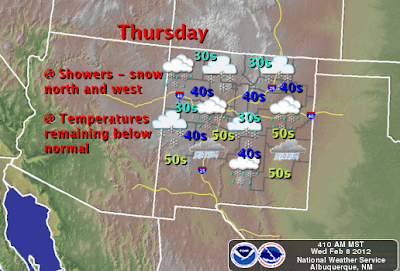 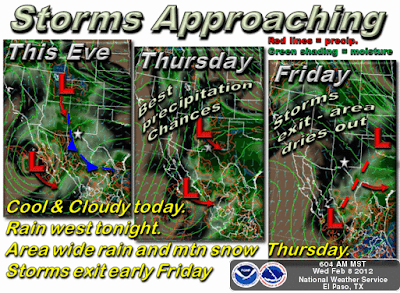 Map Is Courtesy Of The El Paso NWS Office.
Today's weather will be characterized by partly cloudy skies and cool temps across SE NM. Our afternoon highs are generally forecast to range from 45 - 50. Clouds will be on the increase tonight as two upper-level storms begin to impact the area.
Two Upper-Level Storms Impact Our Weather. 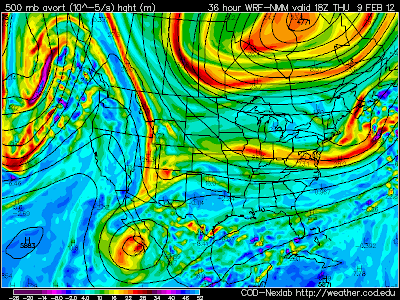 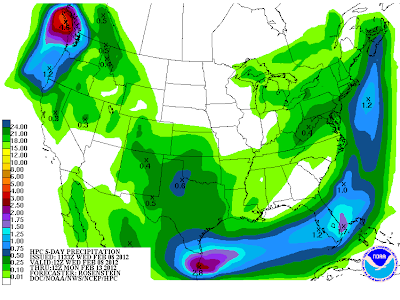 NWS HPC 5-Day Precipitation Forecast.
(Valid Today - Next Monday.)
Two upper-level storms will phase together tomorrow and Friday and bring a chance of rain and snow showers to our area. A cutoff upper-level low at the 500 millibar, or roughly about the 18,000' Mean Sea Level, will continue to drop southward to just south of the southern tip of Baja, California by noontime tomorrow. Meanwhile a short wave trough of low pressure at the 500 millibar level, will swing southeastward across the state and phase, or combine with the cutoff low located way off to our south tomorrow afternoon.
A few light rain showers may break out over parts of the area later tonight, and these will increase in coverage Thursday afternoon into Friday morning. Its possible that a light mix of rain and snow showers may dot the northern areas late tonight into early tomorrow morning. Scattered rain showers may change over to and mix with light snow showers over parts of SE NM late Thursday night into early Friday morning. At this time accumulating snowfall is not anticipated across the local area.
There is a slight chance that a few scattered rain and snow showers will break out over the Guadalupe, Sacramento, and Capitan Mountains later today and tonight. These will increase in coverage Thursday into Friday. Snow level will generally remain above 7,000' MSL during the daytime hours tomorrow and Friday. Its possible that the higher elevations of the mountains above 7,000' could see up to 3" of snow by Friday.
Some of the models are hinting at yet another upper-level storm along with a shot of colder air for the weekend, with yet another storm arriving by the middle of next week.
February 8, 1933.
The coldest weather event in the known history of southeastern New Mexico occurred. Thermometers fell to levels that today are still hard to believe for this part of the country!
Seminole, Texas set a new all time state record low temperature of -23 on February 8th. Morgan, Wyoming recorded a new all time state record low temperature of -66 on February 9th. Seneca, Oregon recorded a new all time record low for the state with -54 on February 10th.
Roswell recorded 4.0" of snow on February 7th, Artesia measured 3.5", and Carlsbad measured2.0" in town, and at the airport 7.0" was measured on the 7th. A historically bitterly cold arctic airmass worked its way southward into southeastern New Mexico, after sending thermometers plummeting across much of the western U.S.A. that eventful week.
High/Low Temps Recorded On February 8th, 1933
Corona Climate High 15 Low -12
Clovis Climate High 12 Low -11
Portales Climate High 3 Low -28
Richland Climate (S Of Portales) High 18 Low -29
Roswell Climate High 10 Low -24
Hagerman Climate High 10 Low -34
Capitan Climate High 12 Low -4
Fort Stanton Climate NE Ruidoso High 15 Low -18 (7th)
Cloudcroft Climate High 19 Low -6
Artesia Climate High 7 Low -35
Hope Climate High 1 Low -22
Carlsbad Climate (City) High 20 Low -17
Carlsbad Airport High 20 Low -10
Tatum Climate High 22 Low -32
Lovington Climate High 19 Low -27
Pearl Climate 15 W Hobbs High 9 Low -30
Seminole, TX Climate High 26 Low -23
Lamesa, TX Low -12
Lubbock, TX Climate High 18 Low -17
Midland, TX Climate Low -11
The following quotes were taken from an article printed in the Artesia Advocate on Thursday, February 9th, 1933-
“The official temperature registered at the government station here was thirty-five below zero, which reading checked with other thermometers in Artesia regarded as accurate.
A reading of thirty below was registered by the thermometer at the Continental Refinery (Navajo Refinery today) about 4:00 o’clock Wednesday morning. And the fact that the Continental thermometer was housed in a building probably explains the differences in the readings.
Other thermometers over town registered from 30 to 43 degrees below zero. The thermometer registered six and one half degrees above zero Tuesday morning at the beginning of the storm, the temperature dropped to zero during the day.”
On February 13, 1905, Roswell plummeted to -29 to set their all time record low.
Temperature Data Is Courtesy Of-