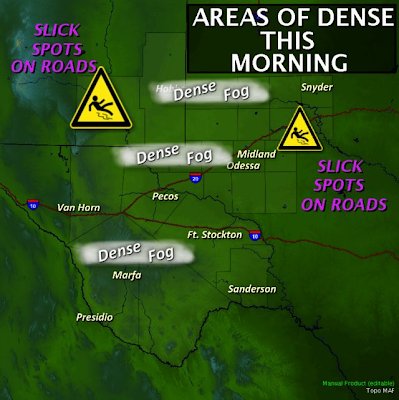 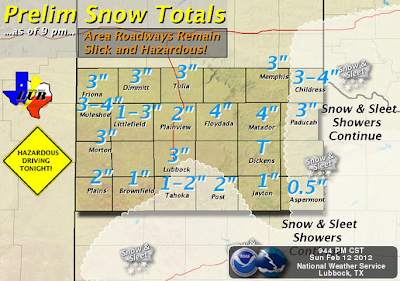 According to the New Mexico Roads Website US Highway 82 has been closed east of Artesia, NM, between mile markers 147-150 at 8:10 AM MST this morning, due to numerous accidents.
Dense Fog Advisory!

A Dense Fog Advisory has been issued for Eddy-Lea-Culberson Co's until 11 AM MST this morning. The visibility will be reduced to less than 1/4 of a mile at times this morning in areas of dense fog, and dense freezing fog.

Areas of dense freezing fog cover parts of SE NM and W TX early this morning. At 5:45 AM MST the visibility at the Carlsbad Airport was 1/2 of a mile in freezing fog with a temp of 30, the Artesia Airport had 1/4 of a mile visibility with a temp of 27, and the Roswell Airport had 11/4 mile visibility with freezing fog and a temp of 28. There may be some slick spots on some of our local roadways so please drive carefully.
Areas of dense freezing fog will prevail through 8:30 AM MST this morning across SE NM, then conditions are forecast to improve. Our skies will clear later this morning and a significant warmup will commence with afternoon high temperatures ranging from 60 to the low 60's across the southeastern plains.

Yesterday's storm was pretty much a bust for most of Chaves and Eddy Counties. At times throughout the day a few light rain showers and a few light showers of sleet fell, but as far as I know no significant accumulations occurred. I managed to pick up .01" with just a trace of sleet.

US Highway 70 was closed east of Las Cruces due to icy conditions and numerous accidents due to the ice. Freezing rain, sleet and snow also caused some problems across Lea County yesterday afternoon and evening with multiple accidents being reported. The same was the case yesterday morning in Albuquerque along I-40. 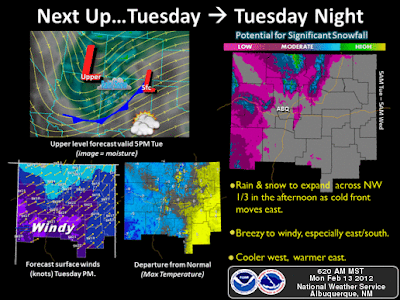 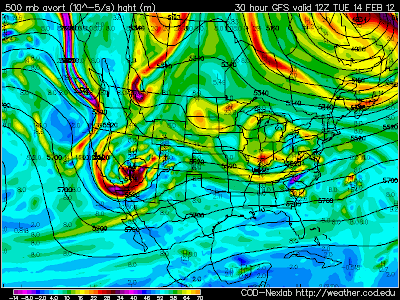 As one storm departs the area today, a second storm will be fast approaching. A closed upper-level low is forecast to dive into northwestern Arizona by sunrise tomorrow morning, then slide eastward across northern New Mexico and into the Texas Panhandle by Wednesday morning. This storm should move too far to the north to produce anything more than breezy conditions on Tuesday. Southwesterly winds will kick up to around 15-25 mph with gusts to up around 35 mph Tuesday afternoon. Our high temps are forecast to climb up into the mid-upper 60's Tuesday and Wednesday. 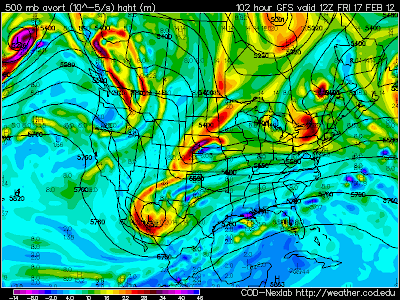 A third upper-level storm is forecast to drop southward into northern Mexico by Friday. This storm has a better chance of producing a few lowland rain showers and perhaps a thunderstorm or two, along with snow across the higher elevations of the mountains. Our high temperatures are forecast to remain in the 60's Thursday and Friday.
The Truth Is Stranger Than Fiction!
My Web Page Is Best Viewed With Google Chrome.
Email Post