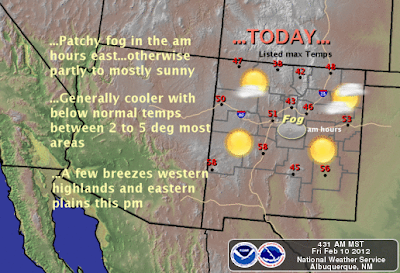 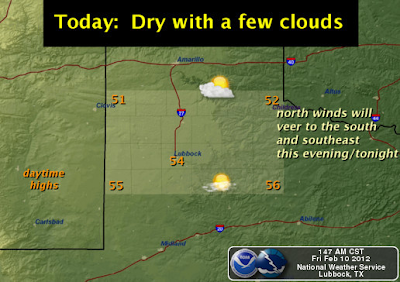 Map is Courtesy Of The Lubbock NWS Office. 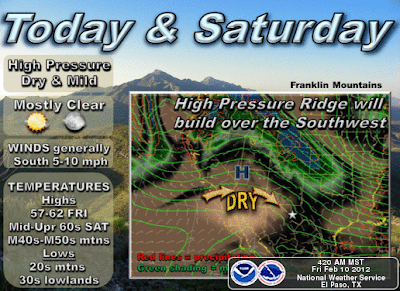 Map is Courtesy Of The El Paso NWS Office.
We can expect sunny skies today along with afternoon high temps generally ranging from 55 - 60 across most of southeastern New Mexico. Yesterday's weak upper-level storm produced a few sprinkles in Artesia, while the Roswell Airport managed to squeeze out .01" of rainfall. Tatum recorded .02" and the 8-Mile Draw Raws located northeast of Roswell measured .01".
Stormy & Colder This Weekend. 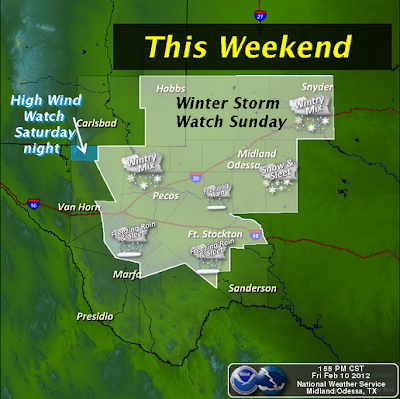 From NWS Midland-
"AN UPPER LEVEL STORM SYSTEM THAT IS APPROACHING FROM THE WEST WILL COMBINE WITH AN UPPER LOW SITTING OVER BAJA/CALIFORNIA. THIS COMBINED SYSTEM WILL BEGIN TO IMPACT THE AREA ON SUNDAY. A MODIFIED ARCTIC AIR MASS WILL ALSO MOVE INTO WEST TEXAS AND SOUTHEAST NEW MEXICO ON SATURDAY. THESE TWO FEATURES WILL RESULT IN A MIX OF WINTRY PRECIPITATION ACROSS SOUTHEAST NEW MEXICO AND WEST TEXAS BEGINNING ON SUNDAY.

A WINTER STORM WATCH HAS BEEN ISSUED FOR THE PERMIAN BASIN...PORTIONS OF LEA COUNTY IN SOUTHEAST NEW MEXICO...THE TRANS PECOS AREA AND THE DAVIS MOUNTAINS AREA FROM 6 AM CST TO 6 PM CST ON SUNDAY. ALSO DUE TO STRONGER WINDS MIXING DOWN TO THE SURFACE WITH THE APPROACH OF THE UPPER LEVEL STORM SYSTEM A HIGH WIND WATCH HAS BEEN ISSUED FOR THE GUADALUPE MOUNTAINS FROM 5 PM MST SATURDAY TO 5 AM MST SUNDAY." 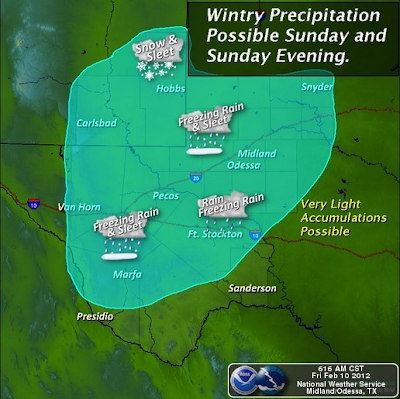 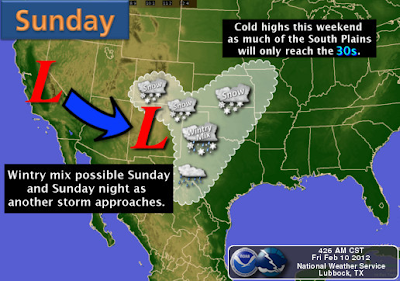 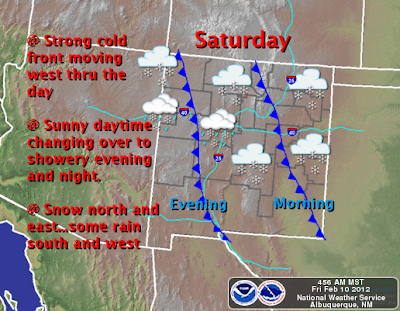 Special Weather Statement From NWS Albuquerque.
A lot of people are asking me if winter is over for SE NM and my answer has been no. Old man winter and mother nature are going to team up once again, and send a couple of winter storms our way over the next week, maybe even beyond that. 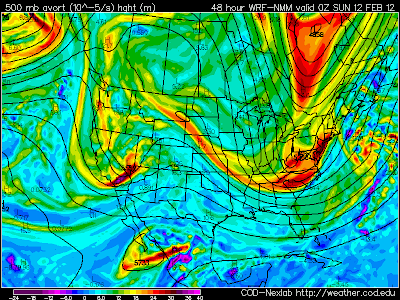 WRF-NMM 500 MB Forecast At 5 PM MST Sat Feb 11, 2012.
Winter storm #2 is forecast to drop southward out of the Pacific Northwest and into southern California by sunset Saturday. It will then crawl eastward across New Mexico over the remainder of the weekend. This one will have to be watched to see if it digs a little further to the south than current model trends indicate. 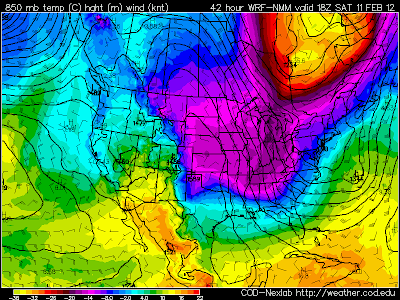 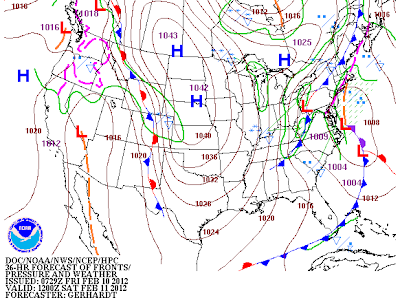 Surface Forecast Map Valid At 5 AM MST Sat Feb 11, 2012.
As the upper-level storm approaches the area from the northwest on Saturday, a modified arctic cold front is forecast to backdoor into eastern and southeastern New Mexico. Our afternoon high temperatures will be tricky Saturday due to the timing of the arrival of the front.
Current National Weather Service forecasts indicate our high temperatures will range from 37 in Hobbs, 48 in Artesia, 49 in Carlsbad, and 56 in Roswell Saturday afternoon. If the front is a little slower in arriving than forecast then our temps will be warmer than forecast.
A colder airmass will overspread the area Saturday night into Sunday with our afternoon highs ranging from 35 - 50 across the area. A wintry mix of light rain, light freezing rain, sleet, and snow will be possible across SE NM Saturday night into Sunday evening. 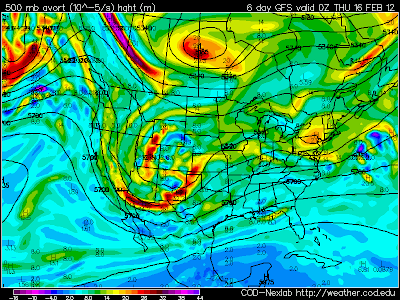 GFS 500 MB Forecast At 5 PM MST Wed Feb 16, 2012.
Winter Storm #3 is slated to impact the state by the middle of next week.
The Truth Is Stranger Than Fiction!
My Web Page Is Best Viewed With Google Chrome.
Email Post