Monday Is Going To Be Windy! 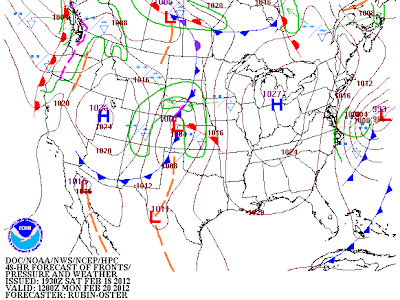 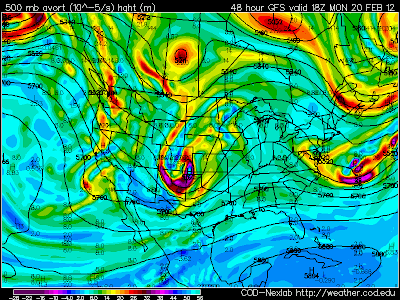 GFS 500 MB Forecast At 11 AM MST Mon Feb 20, 2012.
Skies were slow to clear until late this afternoon across the area, which resulted in seasonably cool afternoon high temperatures. Readings ranged from 56 at the Carlsbad Airport to 55 at the Paduca Raws, 54 at the 8-Mile Draw Raws, 52 at the Roswell Airport, and 50 at the Artesia Airport.

Areas of fog are forecast to develop over parts of southeastern New Mexico and west Texas later tonight and will persists into tomorrow morning.
Sunday will be sunny and much warmer with highs in the upper 60's to the low 70's. Our next weather maker will arrive in the form of a mid-level short wave trough of low pressure, which is forecast to swing across northern New Mexico on Monday.
This storm will generate high winds across the area. A High Wind Watch has been issued for the Guadalupe Mountains for Monday. Westerly winds are forecast to increase to sustained speed of around 35-55 mph with gusts near 70 mph.
Southwesterly to westerly winds are forecast to increase to sustained speeds of around 30-40 mph with gusts to 45-55 mph across the lower elevations of southeastern New Mexico on Monday. Localized areas of blowing dust may occur especially near exposed or freshly plowed or open farmland, lots, and construction sites.
Our afternoon high temperatures on Monday will in the upper 60's to near 70. A Fire Weather Watch has been issued for the local area. Monday will not be a good day for any type of outdoor activity that involves sparks or flame.
The Truth Is Stranger Than Fiction!
My Web Page Is Best Viewed With Google Chrome.
Email Post