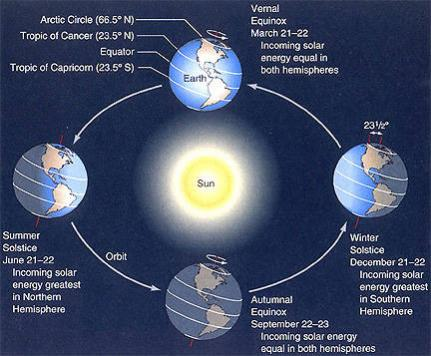 "Today, June 21, 2013, is officially the first day of summer according to what the calendar tells us. That is the beginning of astronomical summer. However, in the meteorological and climatological world, summer has already been in full swing for 20 days. So why do meteorological and astronomical summer start on different days? In short, it is because the astronomical seasons are based on the position of the Earth in relation to the sun, whereas the meteorological seasons are based on the annual temperature cycle.
People have used observable periodic natural phenomena to mark time for thousands of years. The natural rotation of the Earth around the sun forms the basis for the astronomical calendar, in which seasons are defined by two solstices and two equinoxes. Both the solstices and equinoxes are determined based on the Earth’s tilt and the sun’s alignment over the equator. The solstices mark the times when the sun’s annual path is farthest, north or south, from the Earth’s equator. The equinoxes mark the times when the sun passes directly above the equator. In the Northern Hemisphere, the summer solstice falls on or around June 21, the winter solstice on or around December 22, the vernal (spring) equinox on or around March 21, and the autumnal equinox on or around September 22. These seasons are reversed but begin on the same dates in the Southern Hemisphere.
Because the Earth actually travels around the sun in 365.24 days, an extra day is needed every fourth year, creating what we know as Leap Year. This also causes the exact date of the solstices and equinoxes to vary. Additionally, the elliptical shape of the Earth’s orbit around the sun causes the lengths of the astronomical seasons to vary between 89 and 93 days. These variations in season length and season start would make it very difficult to consistently compare climatological statistics for a particular season from one year to the next. Thus, the meteorological seasons were born.
Meteorologists and climatologists break the seasons down into groupings of three months based on the annual temperature cycle as well as our calendar. We generally think of winter as the coldest time of the year and summer as the warmest time of the year, with spring and fall being the transition seasons, and that is what the meteorological seasons are based on. Meteorological spring includes March, April, and May; meteorological summer includes June, July, and August; meteorological fall includes September, October, and November; and meteorological winter includes December, January, and February. These seasons were created for meteorological observing and forecasting purposes, and they are more closely tied to our monthly civil calendar than the astronomical seasons are. The length of the seasons is also more consistent for the meteorological seasons, ranging from 90 days for winter of a non-leap year to 92 days for spring and summer. By following the civil calendar and having less variation in season length and season start, it becomes much easier to calculate seasonal statistics from the monthly statistics, both of which are very useful for agriculture, commerce, and a variety of other purposes."
The Truth Is Stranger Than Fiction!
Email Post