Update On Our Inbound Storm. 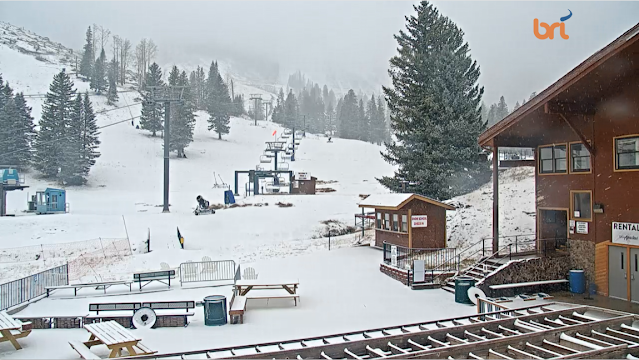 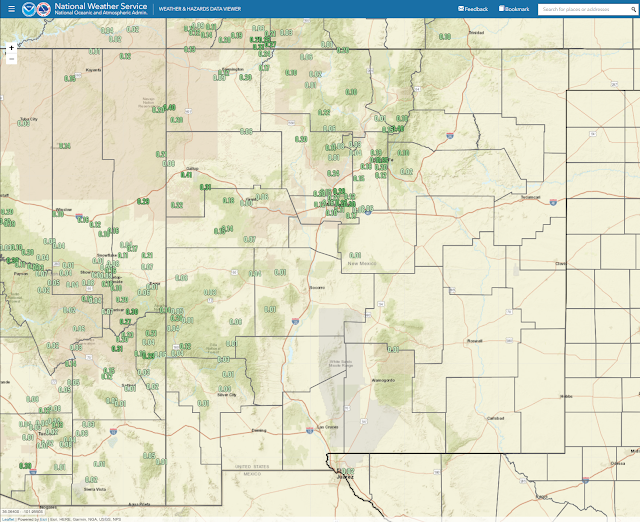 As Of 7 AM MST This Morning.
New Mexico CoCoRaHS 24-Hour Precipitation Totals. 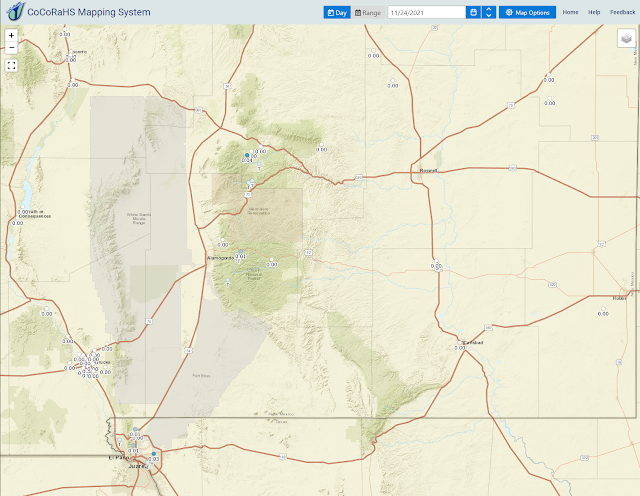 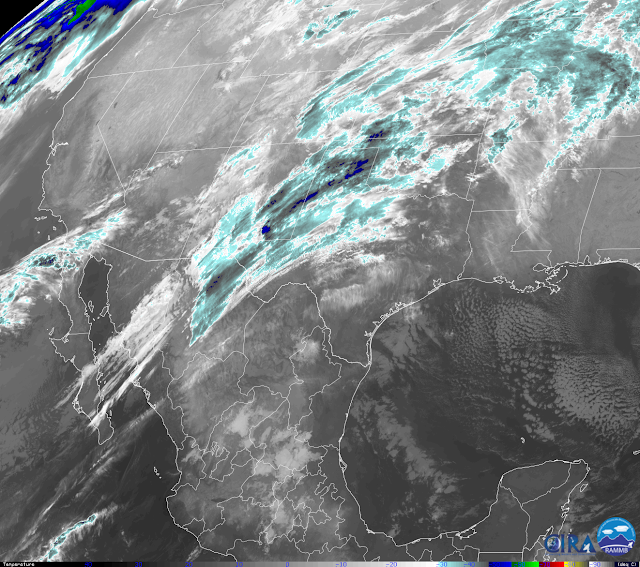 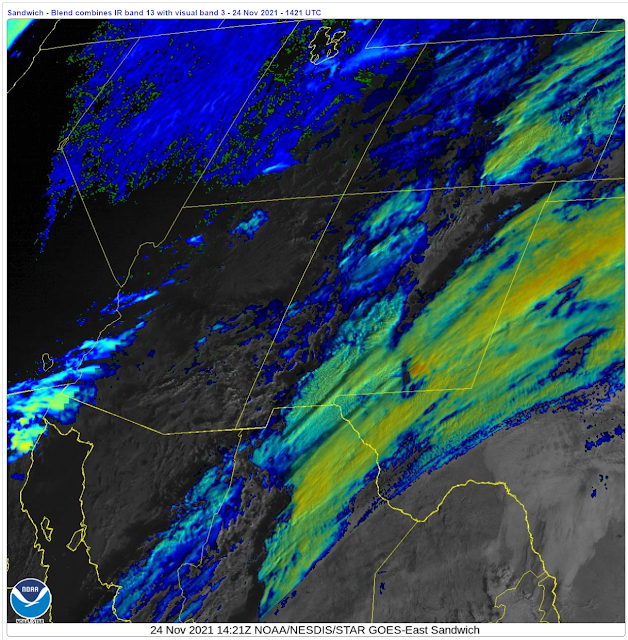 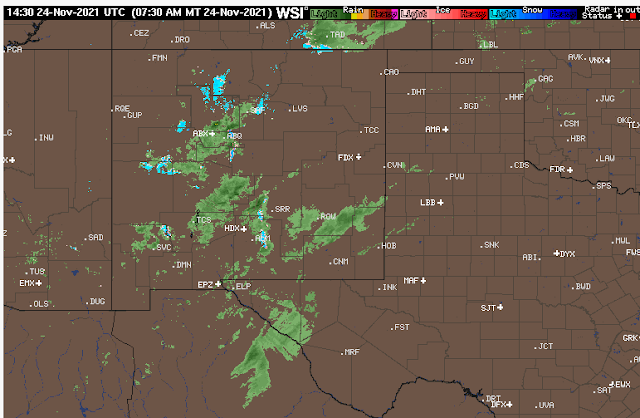 At 7:30 AM MST This Morning.
Rain & Snow Impacting NM This Morning.
Round one of our inbound winter storm is impacting parts of New Mexico this Wednesday morning. Decent rainfall totals are being reported in the Albuquerque and Santa Fe areas as of 7:30 AM MST. Rainfall totals in these areas are ranging from around a tenth of an inch up to three-tenths of an inch. Snow levels in New Mexico are high this morning and are generally 9,000' or higher. The snow level will lower this afternoon into Thanksgiving morning. Down to around 5,000' to 6,000' west of the Central Mountain Chain and down to the valley floors in parts of Eastern New Mexico Thanksgiving morning.

Looking at the Ski Apache webcam it looks like around 1/2" to maybe an inch of snow has fallen so far this morning (as of 7:30 AM MST). Both the Ruidoso and Cloudcroft areas were reporting light rain at the time.

Light rain and snow showers with a few pockets of moderate rain/snow showers will continue off and on over the State today with the activity letting up some this afternoon and evening. This activity will increase in aerial coverage later tonight into Thanksgiving morning. A Pacific cold front will sweep across the state from northwest to southeast today into tonight. Later tonight a backdoor front will move southwestward through the state.
Turning Colder With More Rain & Snow Tonight Into Thanksgiving.
NAM 3K Precipitation Type Forecast. 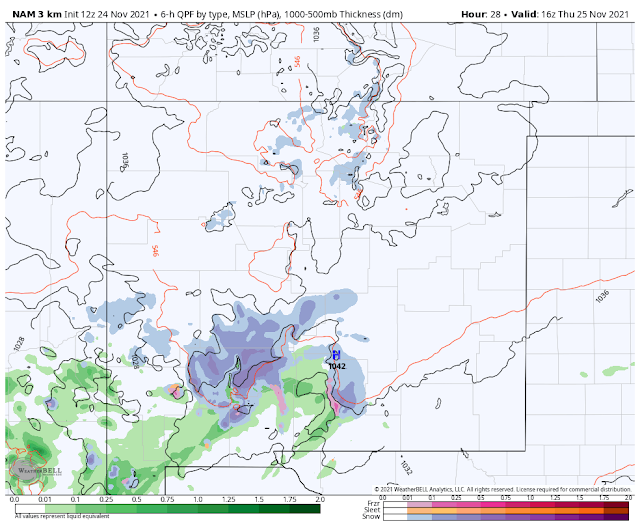 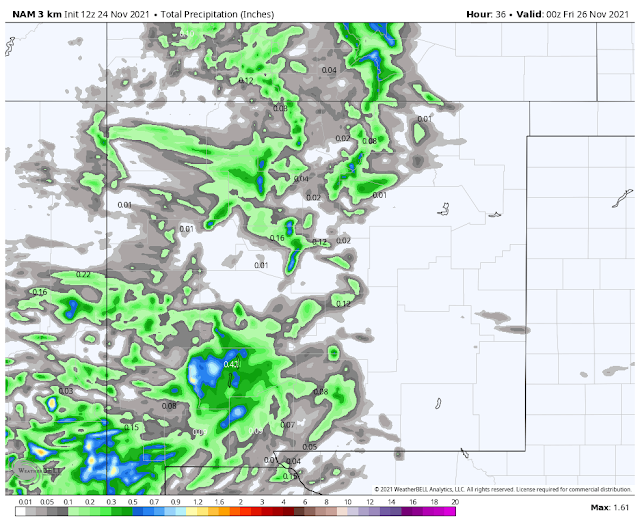 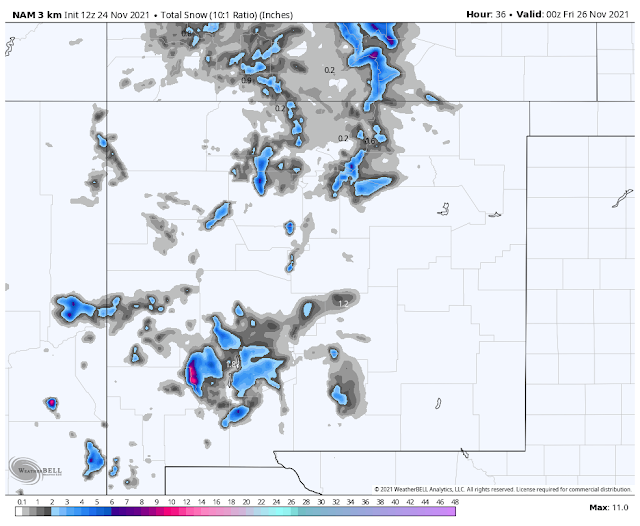 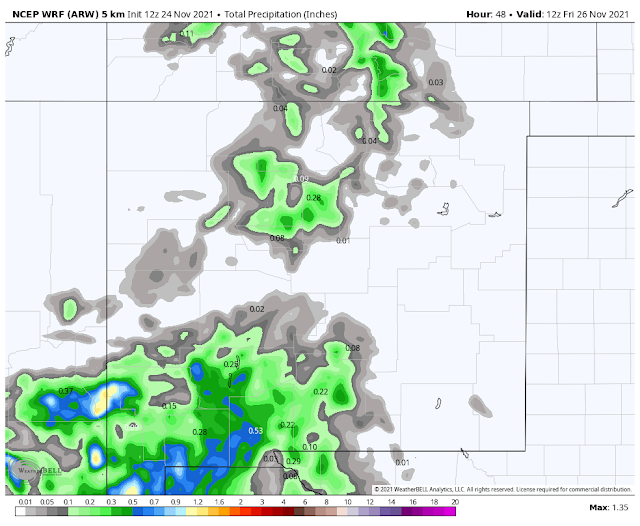 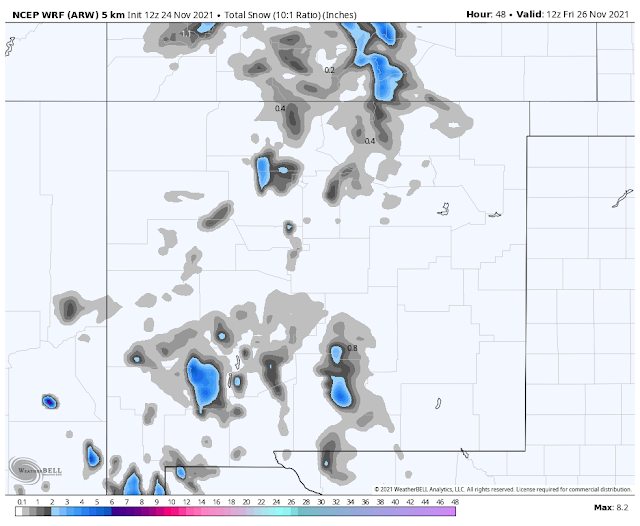 Today Through 5 PM MST Thanksgiving Evening.
As is sometimes the case the forecast models have underestimated the strength of this inbound winter storm. It still is not expected to become a major winter storm but it has already produced heavier rainfall totals than what was forecast. The models are used as guidance by us folks who forecast and observe the weather. So as conditions have changed I've updated my outlook.
Colder temperatures will envelop the state tonight into Friday. Gusty southwesterly winds will occur today into this evening ahead of the frontal passages. Winds will shift around to the northwest and then northeast late tonight into Thanksgiving morning behind the fronts. Gusts of up around 25-40 mph will be possible.
Ruidoso and nearby areas will see highs today in the mid 50's with the mid 40's on Thanksgiving. Cloudcroft and nearby areas will see the low to mid 40's today and the mid 30's on Thanksgiving.
The Southeastern Plains will see highs today in the low to mid 70's and the low to mid 50's on Thanksgiving.
Round two comes tonight with the main impacts of the storm expected across the southern half of New Mexico.
Precipitation will continue off and on today over much of the state except for the Southeastern Plains. It will be showery in nature so some areas will see several rounds. The brunt of the storm is forecast to impact the local area late tonight into Thanksgiving. All precipitation is forecast to end by Thanksgiving afternoon.
Locally I think that elevations above 5,000' late tonight into Thanksgiving morning in the Sacramento, Capitan, and the Guadalupe Mountains will see rain over change to snow. Accumulating snow is possible above 5,000' tomorrow morning through just after noontime. Locations above 7,000' could end up with an inch or two of snow. Cloudcroft, Sunspot, and Ski Apache may see more...maybe 3"- 4"?
Rainfall across the Southeastern Plains is still forecast to be on the light side with storm totals of less than a quarter of an inch. A mix of light rain and or snow may be possible across parts of the Southeastern Plains Thanksgiving morning especially near the mountains...although chances of this happening as of this writing are not that great.
Happy Thanksgiving Everyone!
The Truth Is Stranger Than Fiction!
at Wednesday, November 24, 2021