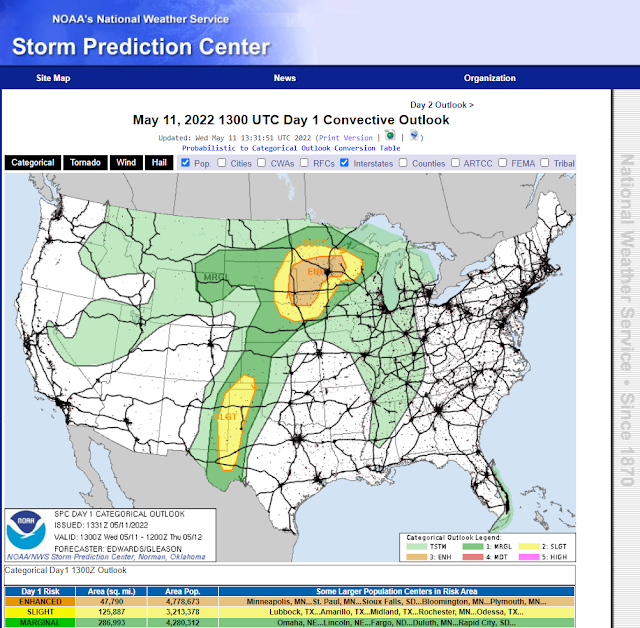 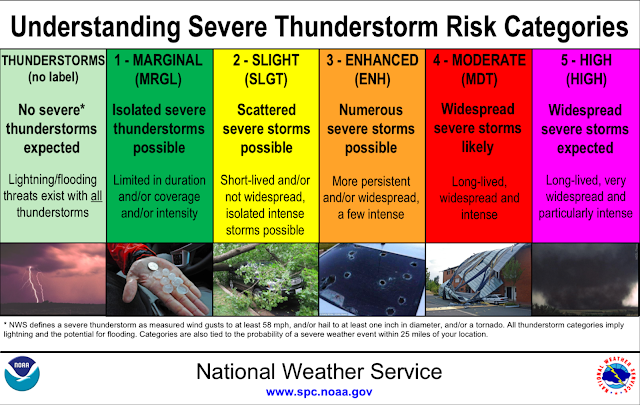 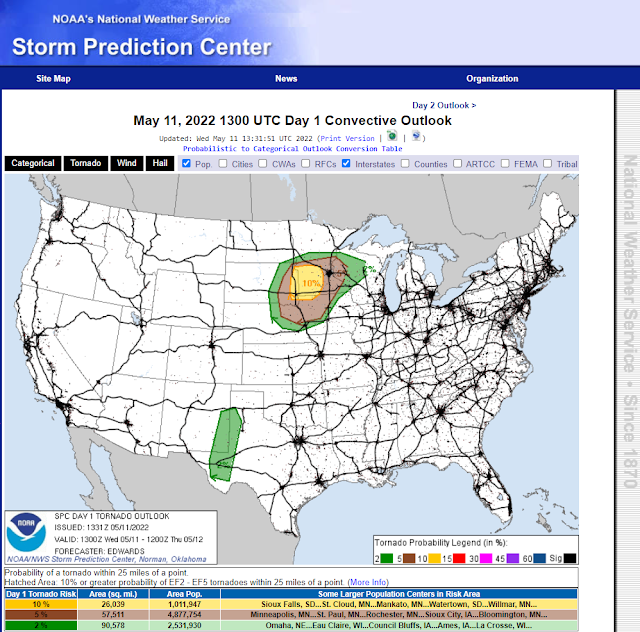 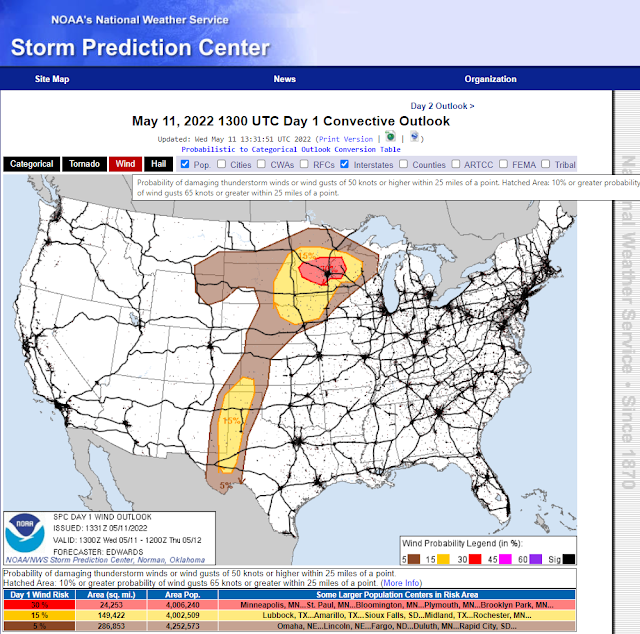 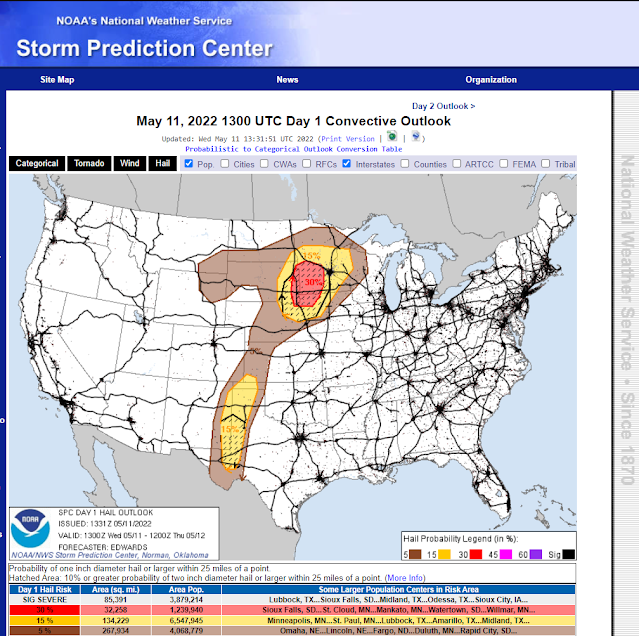 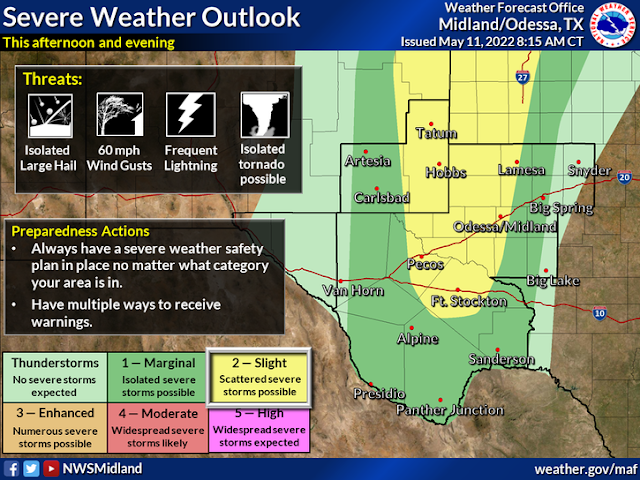 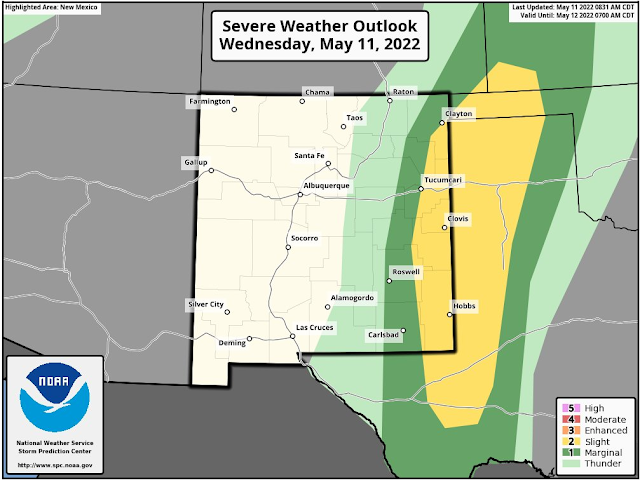 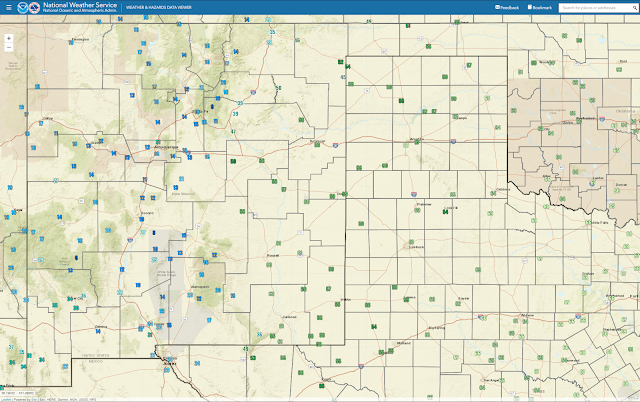 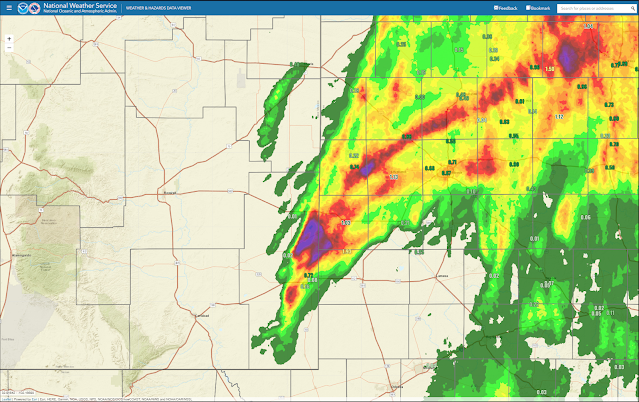 Isolated To Scattered Severe T-Storms Today And This Evening.
A broken line of multicellular thunderstorms developed Tuesday afternoon and stretched from west of Jal northeast to northeast of Tatum. Locally heavy rainfall was indicated by rainfall southeast of Tatum where estimates were close to 5.00". This is likely overdone due to hail contamination in the radar return but no doubt heavy rains did fall from these severe thunderstorms. A Personal Weather Station (PWS) measured .72" of rainfall north of Hobbs and a CoCoRaHS Station southwest of Hobbs measured .64" from yesterday's thunderstorms.
This morning's surface analysis shows that the dryline has backed westward into Southeastern New Mexico. Dew point temperatures have risen up into the 60's in the Pecos Valley but remain in the teens, twenties, and 30's across the Guadalupe, Sacramento, and Capitan Mountains. By this afternoon the dryline is forecast to mix eastward to near the NM/TX state line.
Isolated to scattered mainly multicellular thunderstorms are in our forecast across parts of Northeastern, Eastern, and Southeastern New Mexico and West Texas this afternoon and evening. A few supercell thunderstorms are also possible. Generally, our chances for rain across Northeastern, Eastern, and Southeastern New Mexico are in the 20% to 40% range today into this evening.
Today's severe weather hazards include large hail, damaging thunderstorm wind gusts in excess of 58 mph, and perhaps an isolated tornado or two. Blinding localized dust storms will occur with these damaging thunderstorm winds gusts reducing the visibility down to near zero with little to no advanced warning. I suspect a few haboobs may occur from these thunderstorm wind gusts. Localized heavy rainfall may also produce localized flash flooding in a few locations. Widespread drought relieving rainfall is not going to occur today from these thunderstorms since they will be widely scattered in nature and highly localized.
Dry Lightning Threat Over The Plains And Mountains.
Storm Prediction Center (SPC) Fire Weather Outlook Today. 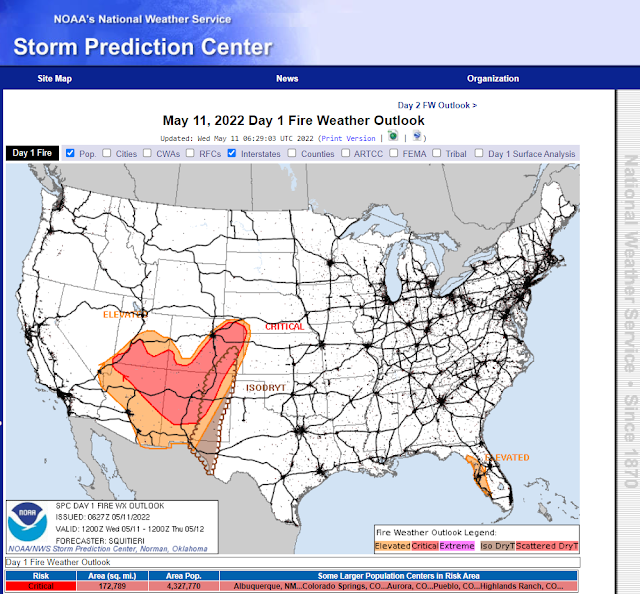 Some of today's thunderstorms are going to be "dry" in nature and produce dry lightning. Meaning that some thunderstorms will produce very little rainfall but lots of gusty winds and cloud-to-ground lightning strikes. This activity will be possible over the east slopes of the Sacramento and Guadalupe Mountains, and the Eastern and Southeastern Plains. Thus further aggravating an already dangerous fire weather set up over the area.
Critically Dangerous Fire Weather Conditions are forecast to continue over much of New Mexico today and Thursday. New Mexico will get somewhat of a break Friday into the weekend but sadly strong winds and Critically Dangerous Fire Weather Conditions will return next week.
Long Range Temperature & Precipitation Forecasts.