Latest Update This Afternoon On Our Winter Storm.

Good morning everyone (Thursday morning @ 8:20 AM). I am still working on today's blog update. Lots going on and will have it posted in an hour or so. Thanks for stopping by. 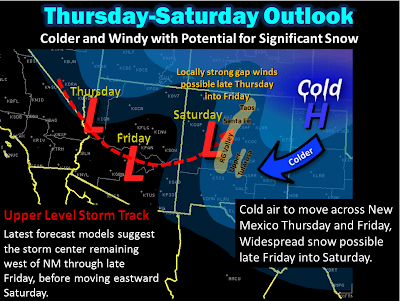 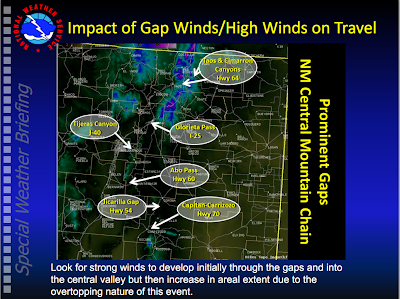 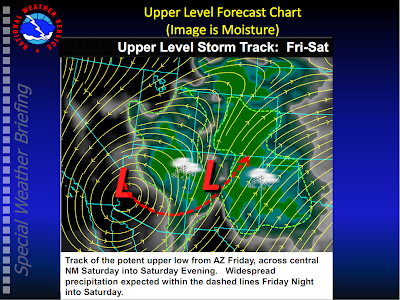 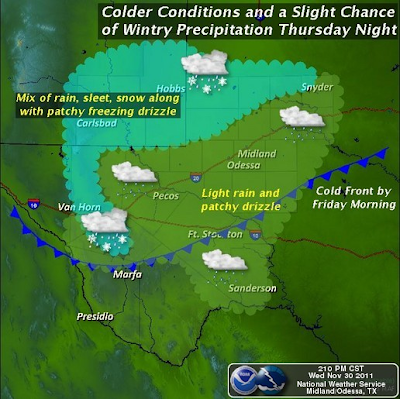 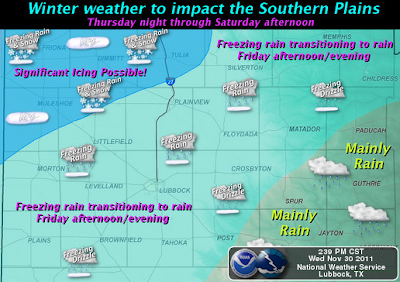 I sat in on a special conference call and web briefing hosted by the Albuquerque National Weather Service Office this afternoon, concerning the Major Winter Storm that is going to impact most of New Mexico tomorrow into this weekend. Here are some of the forecasters thoughts on this significant event.

As the arctic cold front races southward down the eastern plains tomorrow, it will dam up against the central mountain chain of the state. It looks like this is going to be one of those rare occasions to where not only are these areas facing a potentially damaging gap high wind event, (strong northeasterly-easterly winds pushes westward through the mountain passes) but also a over-topping high wind event as well.

The depth of the arctic air should be deep enough by around sunset tomorrow evening to over-top the Sandia and Manznao mountains, and spill down the western slopes into the northeastern heights of Albuquerque and nearby areas. These winds have the potential to reach speeds of 70 mph, and could very well produce some damage. As these powerful wind gusts spill over the tops of the mountains, they will blow snow off of the mountain tops and into the northeast heights of Albuquerque.

The upper-level low now located over southern Nevada, will continue its plunge southward into southwestern Arizona where it will stall through Friday. By Friday night the upper-level low will begin to eject east and northeast towards the state. Widespread snows should develop across much of New Mexico on Friday. By Friday night a significant frontogenetical band of heavy snow should develop somewhere near a Carrizozo-Santa Rosa-Clayton line. There is the potential for significant heavy snowfall totals across the eastern plains of the state. Just where this band of heavy snow sets up is still a little in question and will be dependent upon the exact track of the upper level low.

Bands of heavy snow are forecast to develop across the northeastern and eastern plains of New Mexico Friday night into Saturday. Blowing and drifting snow will be a problem in some of these areas with near whiteout conditions possible. Travel across I-25 and I-40 will be significantly impacted in these areas, and road closures are possible not on just the interstates but also across many secondary roads in these areas. Travel problems are also anticipated across the western areas of the state due to heavy snow and blowing and drifting snow.

A second surge of arctic air is forecast to move southward down the eastern plains on Saturday. Wind chill values to drop down into the single digits and teens across many areas of the state tomorrow night into Friday.

A secondary upper-level low is forecast to dive rapidly southward across Utah on Saturday, and this will help to kick the secondary surge or arctic air southward down the eastern plains. This second upper-level low is forecast to meander slowly eastward across New Mexico Sunday night into Monday. These two features may produce round two of winter weather across the state. Cold air will continue to grip the state into next week.

Not much has changed on the timing of the arrival of the arctic cold front in SE NM tomorrow. Gusty northerly winds of 20-30 mph with higher gusts will accompany the frontal passage, along with rapidly falling temperatures. Our afternoon highs are in the mid-upper 60's today...by Friday and Saturday we will be looking at high temperatures in the low-upper 30's. A High Wind Watch remains in effect for the Guadalupe Pass area for tomorrow afternoon into tomorrow night for northeasterly winds of 30-50G60 mph.

A complicated weather pattern will develop across SE NM Thursday night into Friday. A pocket of warmer moist laded air located roughly between about 5,000' to 10,000' will override the shallow arctic airmass near the surface. This will help to produce a mixed bag of wintry precipitation of drizzle, freezing drizzle, rain, light freezing rain, sleet, and snow across the local area late Thursday night into Friday morning.

Things get even more complicated Friday night. A surface low may form over the south plains of West Texas, and this will keep the warm air advection pattern ongoing, actually increasing it somewhat. Elevated instability could help to produce a few thunderstorms across the area Friday night.

Heavy snow may be a possibility across parts of Chaves County depending upon the track of the upper-level storm. A Winter Storm Watch has been posted for Chaves and Lincoln Counties, from Friday afternoon through Saturday afternoon. The higher areas of the Sacramento and Capitan mountains could receive over a foot of snow. The lower elevations across eastern and parts of southeastern New Mexico could receive over 6 inches of snow.

Travel problems could become widespread across areas of the state from tomorrow night into Sunday. Please visit the New Mexico Road web site for current road conditions across the state.

The Truth Is Stranger Than Fiction!
at Wednesday, November 30, 2011