Meteorological Winter Starts Thursday - It Will Feel Like It. 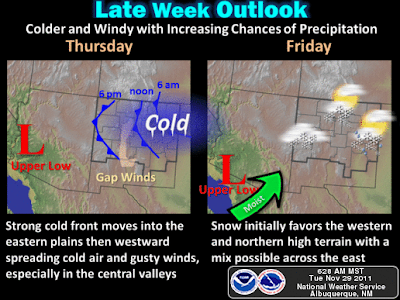 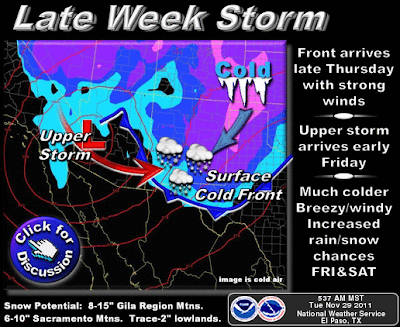 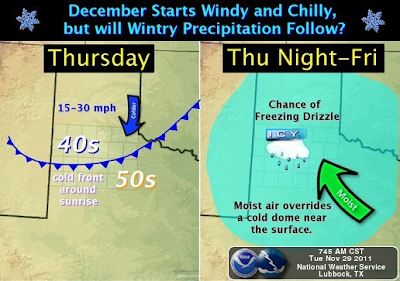 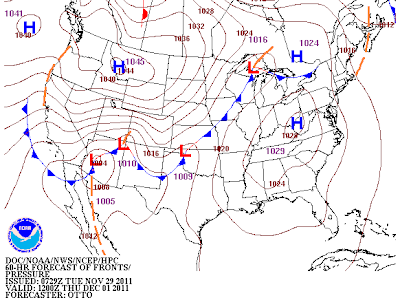 Map Is Courtesy Of The NWS HPC.
A modified surge of arctic air is forecast to arrive in southeastern New Mexico on Thursday. The timing of the arrival of the front is still a little uncertain this morning. This mornings forecast high temperatures for Thursday (courtesy of the Albuquerque and Midland NWS Offices) range from 45 in Clovis, 49 in Tatum, 56 in Roswell, 58 in Artesia, 59 in Carlsbad, to 53 in Hobbs. If the front arrives Thursday morning then these temperatures will be colder than what is being forecast. If the front is a little slower and arrives Thursday afternoon or evening then these temperatures may be a little too cool.
Temperatures will fall fairly rapidly once this arctic cold front arrives in the area. Gusty northerly winds at around 20 - 30 mph will accompany the frontal passage and will persists into Friday. Wind chill values over the area will dive into at least the teens (if not colder in a few places) Thursday night into Friday morning.
One thing is for certain this morning and that is that much colder air is going to invade not only southeastern New Mexico, but much of New Mexico as well. Current forecasts are calling for daytime high temperatures on Friday in the low-mid 30's. This colder airmass is forecast to hang around into the weekend, and hang around into at least the first of next week. Most of the area will not get out of the 30's and 40's during this time frame, and it may even be colder than this in places.
Potential For Major Winter Storm. 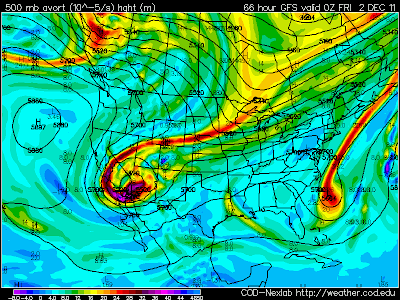 GFS 500 MB Heights/Vorticity Forecast.
Valid At 5 PM MST Thursday.
A strong short wave trough of low pressure will enter the Pacific Northwest today, and then dive southward through the Great Basin, and into southern California on Thursday. The latest model trends indicate that there still remains some uncertainty concerning the forecast track, and speed of this potentially strong mid-upper level winter storm. The GFS moves the upper-level storm across the state on Sunday, while the WRF/NAM is faster in moving the storm out of the state.
Last nights 00Z/5 PM MST run of the ECMWF model, was trying to throw a kink in the forecasts by developing a second lobe of energy on the backside of the upper-level low, then digging the storm further to the south, while stalling it south of southern California into next Tuesday at least.
5-Day Precipitation Forecast Today - Sunday. 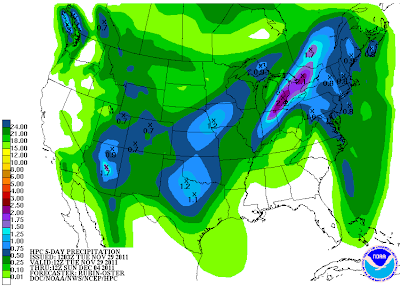 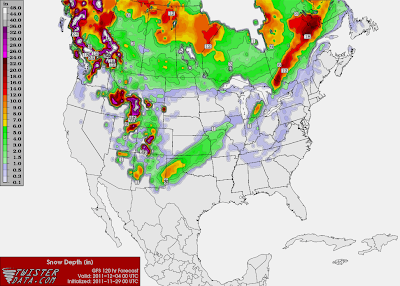 Last Nights 00Z/ 5 PM MST GFS Snow Depth Forecast Map.
Valid At 5 PM MST Saturday.
I still think that this is going to turn out to be a messy storm for us. A mixed bag of sloppy precipitation is anticipated from Thursday night into at least Saturday. Light freezing drizzle, or perhaps light freezing rain, may develop over E/SE NM and parts of west Texas Thursday night into Friday morning. A mix of rain, or freezing rain and sleet, and snow looks possible across SE NM on Friday. For now our chances of seeing measurable precipitation are in the 30% - 40% range.
How much snow is going to fall locally is still a very tough question to answer this morning. The models keep changing their tune with each new run that comes out every six hours. Some of the models yesterday, and last night, were hammering eastern New Mexico with 6" - 10" of snow. I still think its too early to try and nail down any exact totals. I do believe that we have a decent shot of getting some of the white stuff on the ground, I am just not sure of the totals yet.
This winter storm looks like it will be a classic setup for the mountains of the state to receive some heavy snowfall totals. If the storm takes the southerly track and stalls, then the states southern areas, and especially the mountains, would be favored for heavy snowfall.
This mornings Area Forecast Discussion (AFD) from the El Paso National Weather Service Office, discusses the possibility of the Gila Mountains getting 10" - 15"of snow out of this storm, and the Sacramento's picking up around 10". Ski Apache, and Ski Cloudcroft, both could do very well as far as snowfall totals are concerned with this storm.
Current forecast model trends indicate that the lowlands of southern New Mexico as well as southeastern New Mexico may at least pick up a couple of inches of the white stuff. This is not written in stone yet and could easily change.
Thursday is the start of our meteorological winter and it will certainly feel like winter by nightfall. As I have mentioned several times over the past couple of days there remains a lot of unknowns concerning this potentially major winter storm that is due to impact the state. Please check back here often, and I will keep you up to date on the very latest details concerning this impending winter storm. Or visit our local National Weather Service Forecast Office web pages via the links listed below.
El Paso NWS Office
Midland NWS Office
Lubbock NWS Office
Albuquerque NWS Office
The Truth Is Stranger Than Fiction!
at Tuesday, November 29, 2011