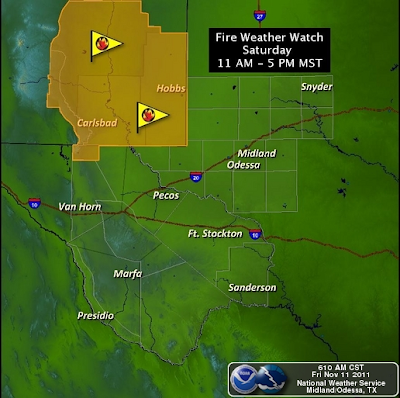 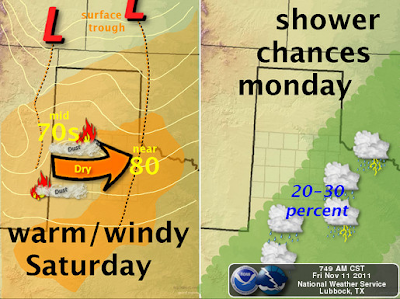 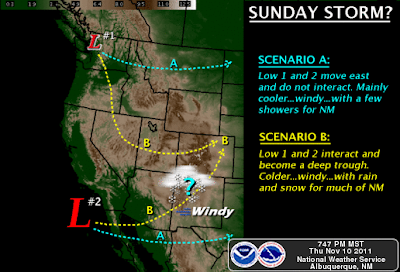 Map Is Courtesy Of The Allbuquerque NWS Office.
Warmer Today Into The Weekend.
High clouds will dominate our skies today as our afternoon high temperatures climb up into the upper 60's. Our highs tomorrow will be about 10-degrees warmer with most of us seeing the upper 70's to the low 80's, maybe the mid 80's in a few places. Sunday's highs are forecast to be in the mid 70's.
Cutoff Upper-Level Low To Affect Our Weather. 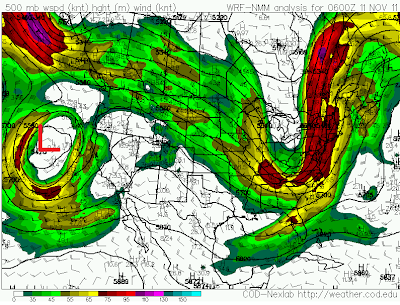 WRF-NMM 500 MB Analysis At 11 PM MST Last Night.
Our next weather maker will come from a cutoff upper-level storm dropping southward down the California coast this morning. The models still have not resolved the details concerning the exact track and timing of this next storm poised to impact the state.
If this next storm tracks to the south, and slows down, then our chances of seeing measurable rain and snow across the local area would go up. If it tracks further to the north and moves eastward faster than currently being forecast, then our chances for seeing precipitation would dwindle.
A Fire Weather Watch has been issued for for southeastern New Mexico for Saturday. Southwesterly winds are forecast to kick up at around 20-25 mph with stronger gusts Saturday afternoon. So please refrain from any type of outdoor activity involving the use of flame or sparks. It will not be a good day to do any type of outdoor burning.
West Texas & SE NM Weather Trivia-
(For November 11th.)
"On this day in 1911, in Texas, a powerful cold front that swept across the treeless plains on strong north winds is called a "blue norther." On this date, one of the most powerful cold fronts in history was doing just that. The temperature contrasts across the front were incredible. Kansas City recorded a temperature of 68 degrees while North Platte at the same time was only 4 above. Kansas city rose to 76 by late morning, the temperature then began to drop and it was snowing by early afternoon. By midnig the temperature was 11 above zero. Oklahoma City recorded a record high (83) and a record low (17) on the same day. At Independence, Kansas the temperature dropped from 83 to 33 degrees in one hour. An F4 tornado killed 9 and injured 50. Survivors of the tornado had to dig through the rubble in zero degree temperatures and blizzard conditions."

More On This Historic Weather Event In 1911. 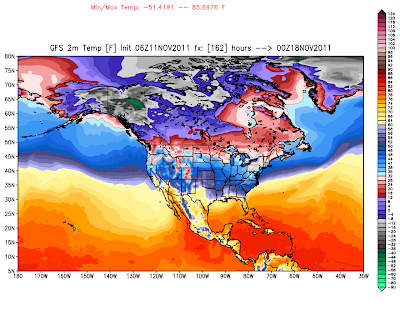 Map Is Courtesy Of Policlimate.
The US GFS model (above) continues to forecast some
unbelievably cold temperatures across Eastern Alaska
and Northwestern Canada next week. That green blob is
temps in the -40F to -50F range, surrounded by
a large area of -20F to -30F temps. 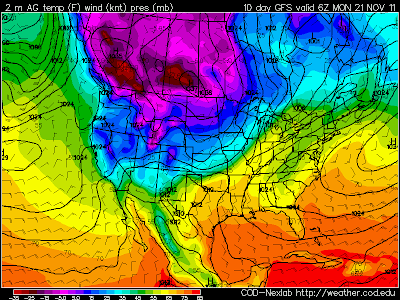 GFS 10-Day Surface Temperature Forecast.
Taking a long look into the future, we can see that the GFS
brings this massive slug of bitterly cold arctic air into the
the Northern Plains and Rockies by the 21st. This is a
long way out and mostly speculation at this point. But
this bears watching, since this arctic airmass has the
potential to affect our weather Thanksgiving week.
The Truth Is Stranger Than Fiction!
at Friday, November 11, 2011