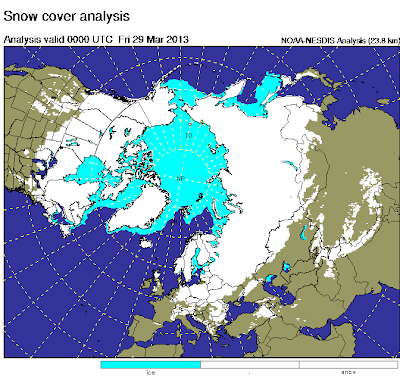 "Incredibly, British Summer Time officially starts tomorrow but millions of brassed off Brits pining for warmth will have to endure freezing temperatures and biting winds until May.The misery will continue with daytime temperatures struggling to reach a bracing 5C (41F). The only ray of sunshine, forecasters said, is that it will stay dry.

As if the outlook wasn’t bleak enough already, meteorologists believe the shivering start to 2013 has been the coldest in more than 200 years.

More worryingly, the combination of sub-zero temperatures and heavy snow experienced across much of the country recently could be the prelude to a new Ice Age that will begin next year and last for 200 years.

Dr Abdussamatov believes Earth was on an “unavoidable advance towards a deep temperature drop”. The last big freeze, known as the Little Ice Age, was between 1650 and 1850.

Today he said: “The last global decrease of temperature (the most cold phase of the Little Ice Age) was observed in Europe, North America and Greenland.

“All channels in the Netherlands were frozen, glaciers were on the advance in Greenland and people were forced to leave their settlements, inhabited for several centuries.

“The Thames river in London and Seine in Paris were frozen over every year. Humanity has always been prospering during the warm periods and suffering during the cold ones. The climate has never been and will never be stable.”

My Web Page Is Best Viewed With Google Chrome.
at Saturday, March 30, 2013