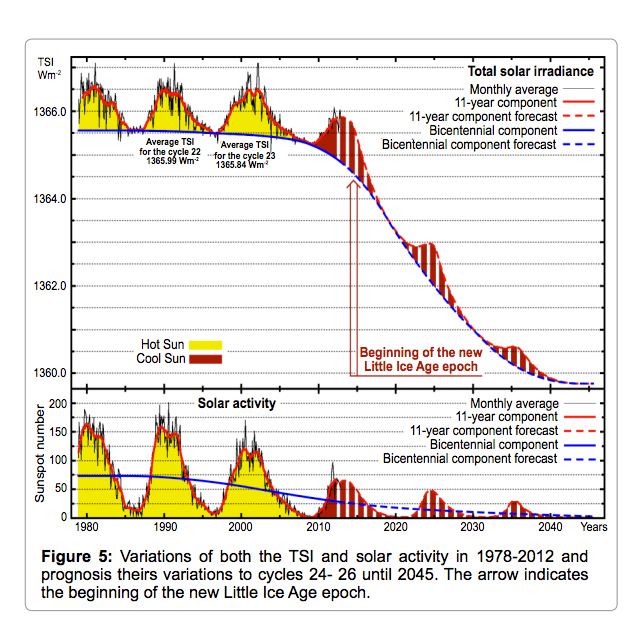 Recent poles indicate that most Americans aren't really concerned about Global Warming or Climate Change. Very few believe that this is an important issue that needs to be addressed. Like many other controversial issues facing us this one is way down on the bottom of most peoples priority list.

For those of you who read my blogs you know that I too do not believe in Global Warming, in that we as humans are the cause of it. Global warming in fact, and Global Cooling, both occur in cycles when you step back and look at the big picture over a long period of time. I do believe we are headed into another Little Ice Age...quickly. We may not be concerned about this now but trust me in the coming years ahead we are going to be very concerned about it.

What startles and concerns me is just how strong the push from the Political Left is becoming in promoting their "Climate Change Agenda." I don't have the time to get into all of the reasons why but simply put its part of a continuing plan to destroy America...mainly capitalist America. This is nothing more than a tool to take more of our freedoms and rights away from us the American people. They want to be in charge...of everything.

First we had the Global Cooling scare during the mid and late 1970's. That didn't go very far because it was based on bad science and political lies. The same folks who came up with that fiasco then invented or created the Global Warming lie over roughly the past 20 years. When that didn't pan out too well for them and people begin to loose interest they changed the name to Climate Change.

Recently the Pope of Rome threw in his support for the Climate Change Agenda. Now here comes the scary part of all of this. So have the Muslim Religious Leaders! They are teeming up with the Pope, the Political Left to save the planet. At whose expense? Take a guess.

As a student of history I know that when religion and politics marry it always ends up in a bad divorce for humanity. Brings to mind this: "George Santayana: Those who cannot remember the past are condemned to repeat it."  Mr. Santayana no doubt borrowed this quote from Edmund Burke who many attribute to be the father of modern day conservatism. Quote: "Those who don't know history are destined to repeat it." Mr. Burke also said: "All that is necessary for the triumph of evil is that good men do nothing." Apathy is killing America today.

"Human beings could cause the ending of life on the planet, says a group of Islamic scholars − and countries round the world, particularly the rich ones, must face up to their responsibilities.
Climate change, they say, is induced by human beings: “As we are woven into the fabric of the natural world, its gifts are for us to savour – but we have abused these gifts to the extent that climate change is upon us.”
The views of the scholars – some of the strongest yet expressed on climate from within the Muslim community – are contained in a draft declaration on climate change to be launched officially at a major Islamic symposium in Istanbul in mid-August.
Allah, says the declaration, created the world in mizan (balance), but through fasad (corruption), human beings have caused climate change, together with a range of negative effects on the environment that include deforestation, the destruction of biodiversity, and pollution of the oceans and of water systems.
Natural resources
The draft declaration has been compiled by the Islamic Foundation for Ecology and Environmental Sciences (IFEES), a UK-based charity focused on environmental protection and the management of natural resources. The declaration mirrors many of the themes contained in a recent encyclical issued by Pope Francis, the head of the Catholic church.
Analysis: After the Pope’s plea, what do other faiths think on climate?
The Islamic declaration makes particularly strong criticism of the world’s richer and more powerful countries, which, it says, have delayed through their selfishness the implementation of a comprehensive climate change agreement.
“Their reluctance to share in the burden they have imposed on the rest of the human community by their own profligacy is noted with great concern,” the declaration says.
Interestingly, the draft declaration – which is still being worked on by various Muslim academics around the world – says that, in particular, wealthy oil-producing countries must “refocus their concerns from profit to the environment and to the poor of the world”. Saudi Arabia, where Mecca is located, is one of the world’s leading oil-producing countries.
Carbon footprint
The declaration says a new economic growth model should be found that recognises that the planet’s resources are finite.
It also calls on big business to face up to its social responsibilities and not exploit scarce resources in poor countries, and says that businesses should also take a more active role in reducing their carbon footprint.
Report: Pope Francis’ climate call to action in encyclical
The declaration says Muslims everywhere in their particular spheres of influence should seek to play a role in tackling climate change – and that other faith and religious groups should also join in realising the aims of the Islamic scholars “to compete with us in this endeavour so we can all be winners in this race”.
The declaration quotes extensively from the Qur’an, the Muslim holy book, as the basis of its arguments.
Besides IFEES, Islamic Relief Worldwide, the Climate Action Network International and GreenFaith have also been involved in formulating the declaration."
This article was produced by the Climate News Network
The Truth Is Stranger Than Fiction!
Email Post