A Change In The Storm Track Will Bring Winter Back. 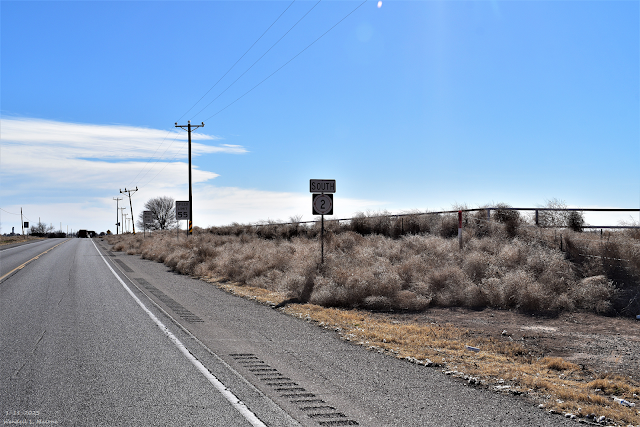 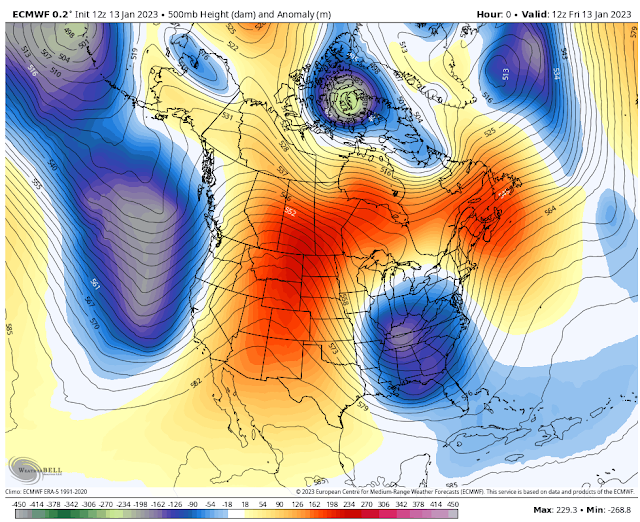 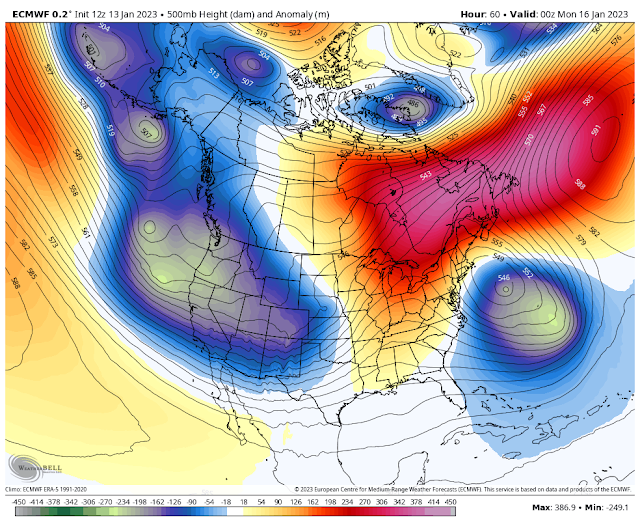 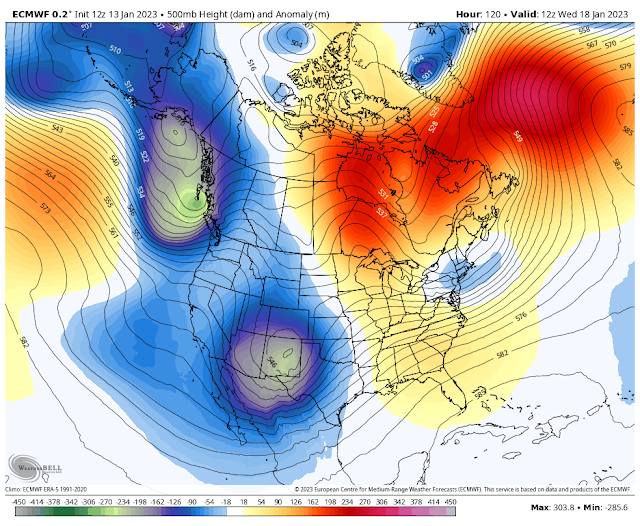 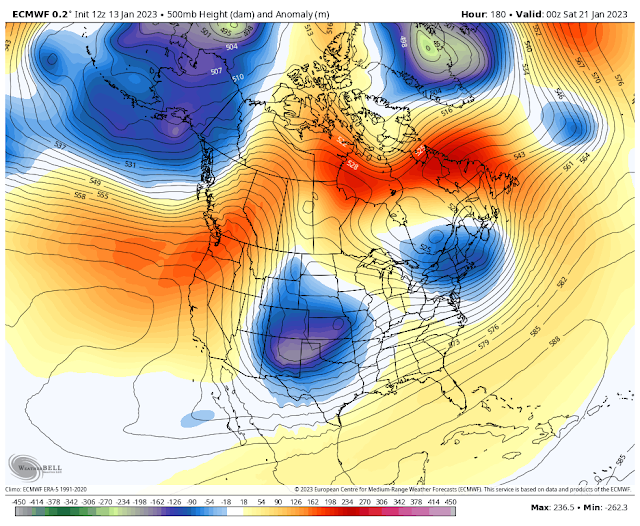 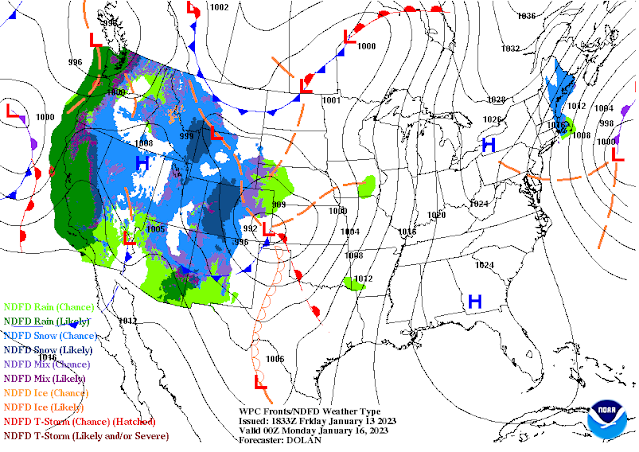 Valid At 5 PM MST Sunday.
A Change In The Storm Track Will Bring Winter Back.
After the Christmas holidays I mentioned that about the middle of January we would see a change in the storm track which would cause our local weather to become more active. That change is now underway. Out over the north-central Pacific Ocean a split flow is developing in the jet stream. Meaning that the subtropical jet stream will be phasing with the Polar jet stream west of California over the next week. In short this means a more active storm track for New Mexico and the Desert Southwest. From Sunday into the end of next week three different storms will affect us.
ECMWF Total Precipitation Forecast. 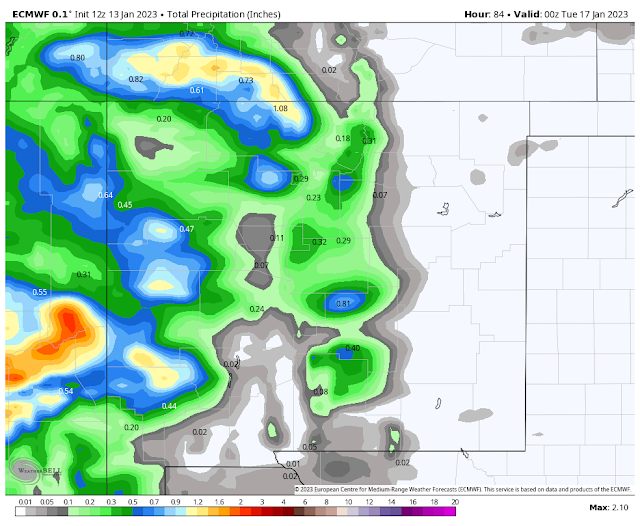 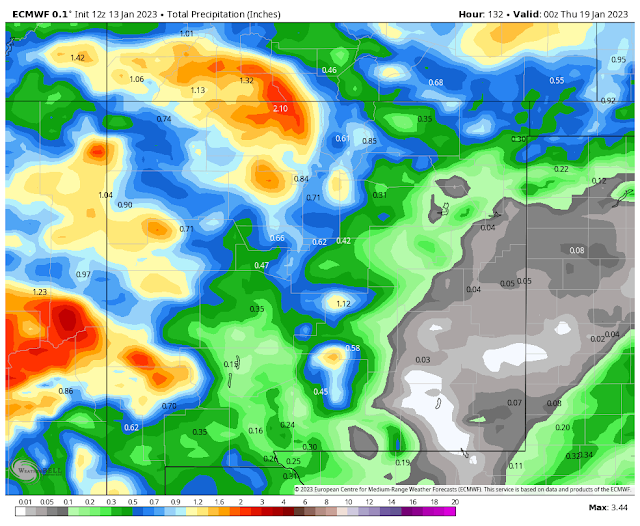 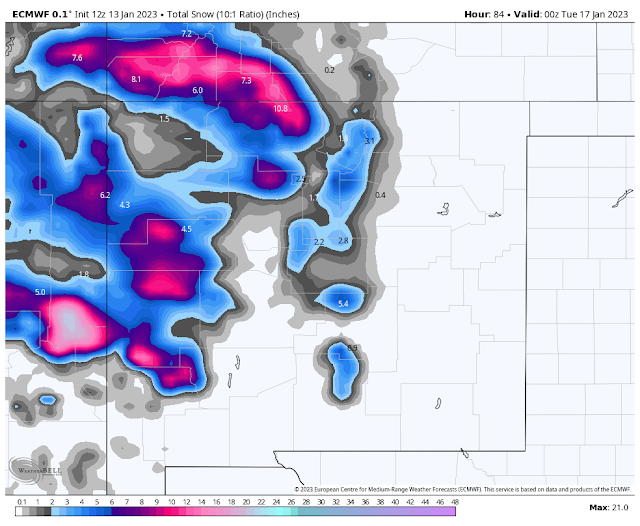 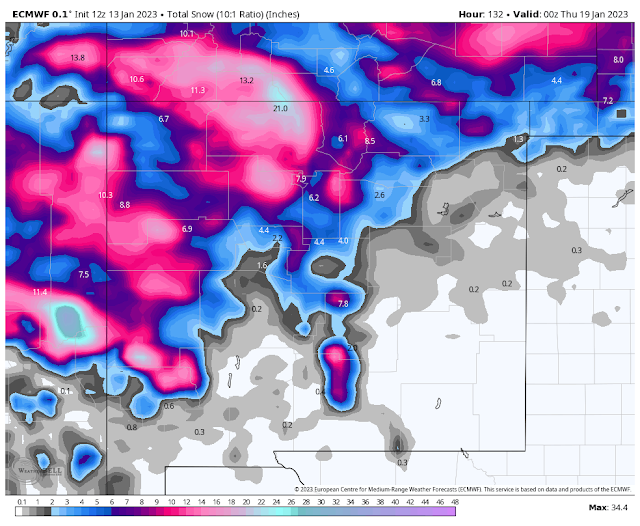 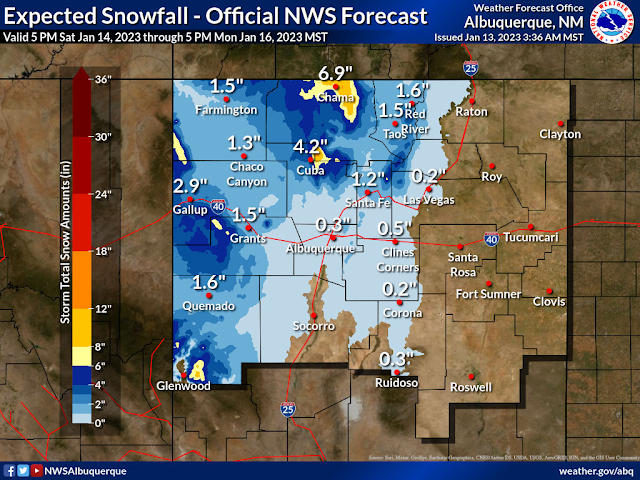 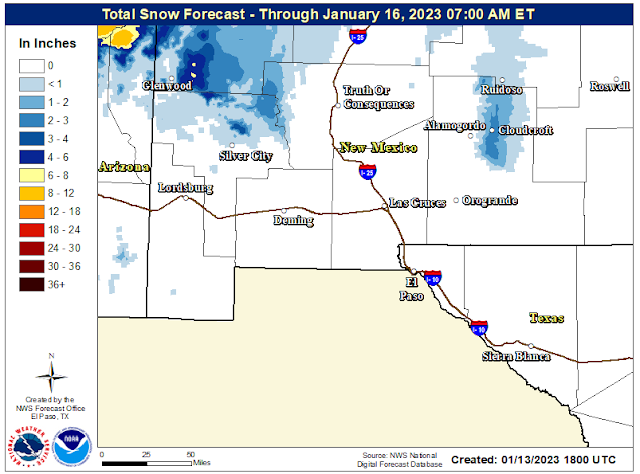 Special Weather Statement From NWS Albuquerque.
Our first winter storm will begin impacting the western and northern areas of New Mexico Saturday night. A combination of lowland rain showers and mountain snows with lowering snow levels are expected Saturday into Sunday. Potentially heavy snows are possible over parts of the southwestern, western, and northern mountains Saturday through Monday.
Current forecasts indicate that the Sac's may see 2" - 4" of snowfall Sunday into Monday. Snow levels will start out around 5,500' Sunday morning rising up to 7,500' Sunday afternoon.Snow levels will drop down to around 6,000' by Tuesday. Additional heavier snowfall is possible Tuesday into Wednesday with storm number two. And again with storm number three by the end of next week.

Windy weather is forecast also for Sunday and Monday. In fact current forecasts are calling for westerly winds sustained at around 35-40 mph with gusts near 70-75 mph Sunday into Sunday night for the Cloudcroft area. The Ruidoso area will have gusts in the 50-60 mph range if not higher. Gusts near 45 to 50 mph are forecast for Monday. Blowing snow may create travel hazards along with the moderate snowfall.
For the southeastern plains Sunday will be windy also with west winds gusting up into at least the 40-50 mph range. Additional High Wind Watches/Warnings and Wind Advisories are possible for the local area including the Southeastern Plains and Sacramento and Capitan mountains for Sunday.

A High Wind Watch is now in effect for the Guadalupe mountains of Eddy and Culberson Counties Sunday morning through Monday evening. West winds sustained at around 40 to 60 mph with gusts up to around 85 mph range are expected. Localized areas of blowing dust are also possible. Rain is not in our local forecast for the southeastern plains until storm number two arrives next Tuesday and Wednesday...then maybe.

Record Cold In Siberia May Affect Us In The Long Range.

Extreme cold is gripping Siberia as temperatures fall to the lowest levels since 2002. Sometimes these brutal Siberian record cold outbreaks will work themselves out of Siberia and across the north pole then southward into Canada and the U.S. We will need to watch to see if this happens in about a week to ten days from now. Meantime expect more Pacific storms to hammer California and the Southwest including New Mexico. Winter is back!

"Headlining the cold were temperature readings from the northern Siberia town of Zhilinda, which dropped to 80 degrees Fahrenheit below zero (62.1 degrees Celsius below zero) both Wednesday morning and Thursday morning, local time. Not only were these readings the coldest at this rural station since 1942 and represented new records for the month of January, but they were also the lowest temperatures recorded in all of Russia since 2002.

Always Check The Home Page For The Latest/Current Watch/Warning/Forecast Information.
at Friday, January 13, 2023