As Our Latest Winter Storm Departs-Another Is On The Way. 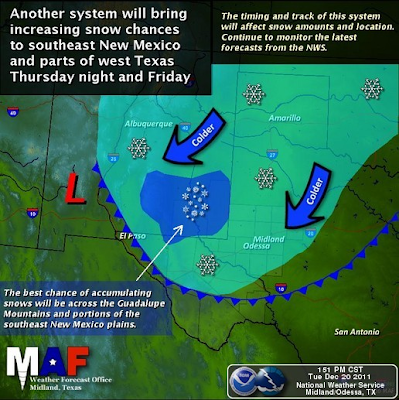 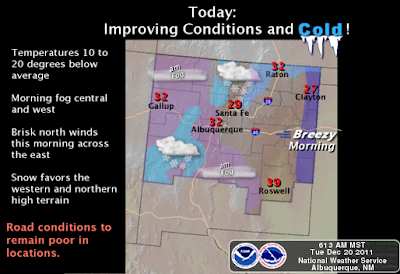 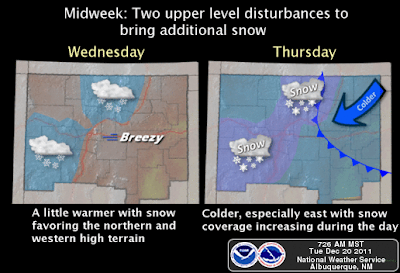 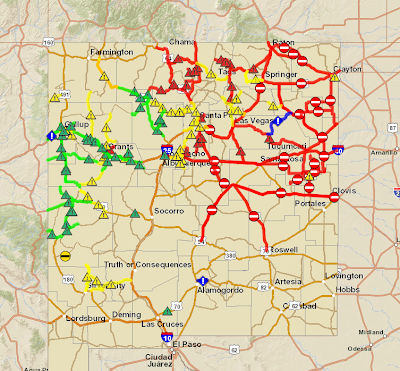 Road Closures Across New Mexico At 8 AM This Morning.

As of 8 AM MST this morning nearly every road across this area (see the map above) remained closed. Four people were killed and two others seriously injured in a two-vehicle accident on U.S. 60/84 east of Melrose, the Curry County Sheriff's Office reported late Monday.

A report of 24" of new snow was received yesterday 25 miles north of Pie Town in western New Mexico. Other significant totals include 14" in Grants, 12" at Bluewater Lake, 10" 11 miles SSE of Tijeras. For additional snowfall totals compiled by the Albuquerque NWS Office, please visit this link.

Two day local snowfall totals include 8.0" 1.8 miles SW of Cloudcroft, 6.7" in Cloudcroft, 4.7" in High Rolls, and 2" at Ski Apache. Light snow was reported for a little bit yesterday afternoon at the Roswell Airport, and sleet mixed in with the rain for a few minutes in the Artesia area. A couple inches of snow was reported in the Pine Springs and Guadalupe Pass areas yesterday.

There was ample low and mid-level moisture associated with this powerful winter storm. So why didn't southeastern and eastern New Mexico see more snow? Its was simply a matter of timing.

The strong upper-level storm arrived near Roswell yesterday afternoon, and then slowly moved off to the northeast, where it was located over the Texas Panhandle early this morning. The colder air did not arrive until late yesterday afternoon...by then it was too late for any snow here locally, since the best lift and upper-level dynamics needed to produce snow were well north of the area.

We simply got dry slotted by the strong downslopping southwesterly winds on the southern side of the upper-level low as it slid off to our northeast. The cold moist air needed to be in place first, before the upper-level storm arrived, for the best set up...and the upper level storm needed to come across the area a little further to the south. As I had previously mentioned, cutoff upper-level lows, and closed upper-level lows that produce our winter storms, are extremely difficult to forecast at times, and this was certainly true with this storm.

Some of the stronger wind gusts reported yesterday include 72 mph at Clayton, 63 mph at the Pinery Raws in the Guadalupe Mountains National Park, 60 mph at Raton, and Tucumcari, 54 mph at the Carlsbad Airport, and 41 mph at the Artesia Airport. These strong wind gusts played havoc with my outside Christmas decorations and I'm sure I wasn't the only one who suffered this dilemma.

Winter Storm #2 Is Just Around The Bend. 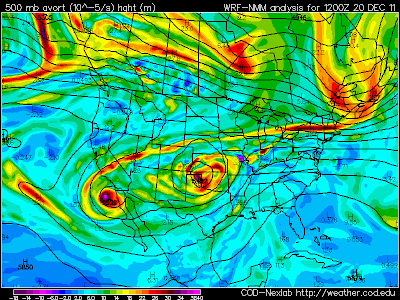 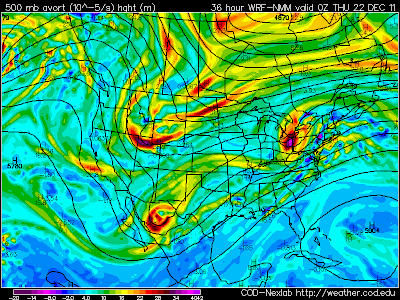 By sunset tomorrow evening, this second upper-level storm should be moving across northern Mexico just to our south. Current thinking is that it will have little impact on the area since it will not have a lot of moisture to work with. A third upper-level storm can be seen taking shape over northern Utah at this time as well.

Which Model Forecast Will Be Right? 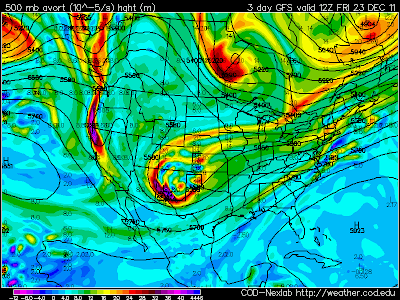 This Mornings 5 AM MST GFS 500 MB Forecast.
Valid At 5 AM MST Friday Morning.

This mornings 5 AM MST run of the GFS 500 MB forecast model (image above), depicts this next winter storm to be located over central New Mexico by Friday morning. 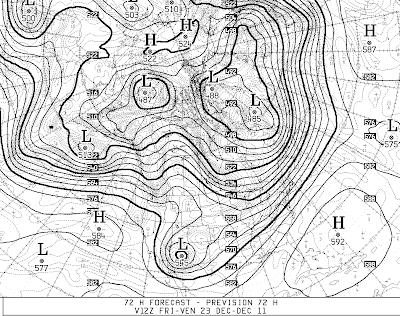 This Mornings 5 AM MST Canadian 500 MB Forecast.
Valid At 5 AM Friday.

The Canadian model (CMC) depicts the same upper-level storm over southeastern Arizona by Friday morning, and continues digging it further to the west and south than the GFS model. 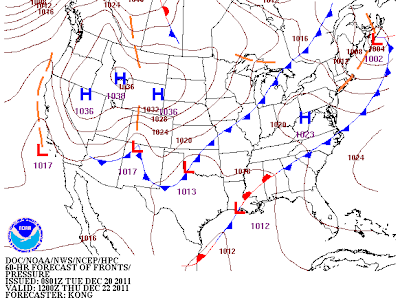 Looking at the models forecasts above its easy to see that another storm is coming to New Mexico. It should arrive in the Four-Corners area by sometime on Thursday. What happens after that is the great dilemma for forecasters.

Last nights 5 PM MST run of the ECMWF model, (this mornings 5 AM MST European, or ECMWF model run is not available yet) kept the storm as a progressive open trough of low pressure, sweeping across the state on Friday. This generally is being rejected by forecasters as the outsider model this morning.

The GFS model depicts a large closed upper-level low over the state by Friday morning. The Canadian model depicts a large closed low over southeastern Arizona, and indicates that it may continue to dig to the south with time. The trend so far this season is for the models to drag these upper-level storms across the state to fast and too weak. The thinking is that this next winter storm will dig further to the south and west, and will also be another strong winter storm. Just how much moisture it will have to work with is somewhat questionable this morning.

Yet another surge of cold air is forecast to move southward down the eastern plains of the state, and into the local area late Wednesday night or early Thursday morning. So it appears that unlike our last storm, cold moist air at the surface will arrive in SE NM ahead of this next upper-level storm. 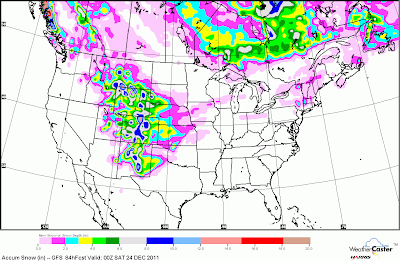 Snow is already in our local forecast for Thursday night into Friday. Please visit the local National Weather Service Forecast links at the top of my web page for the latest up to date forecasts for Roswell, Artesia, Carlsbad, Hobbs, Ruidoso, and Cloudcroft.

This mornings GFS model (depicted above) is forecasting 1"- 5" of snowfall for most of SE NM by 5 PM Friday. This is very interesting, because the GFS model forecast of the upper-level storm, is not as strong as the Canadian (CMC) model forecast, so could we get even more snow than this???

Should the upper-level storm dig further to the west and south as the Canadian model is forecasting, then our setup locally, will be much more favorable for accumulating snowfall. If we are going to see a White Christmas here in SE NM this year...this next winter storm looks like it may give us our best shot at it. A weaker upper-level storm may traverse the area on Christmas Day, more on that later. So stay tuned...we are not out of the running for a White Christmas just yet.

The Truth Is Stranger Than Fiction!
on December 20, 2011
Posted by Wendell Malone