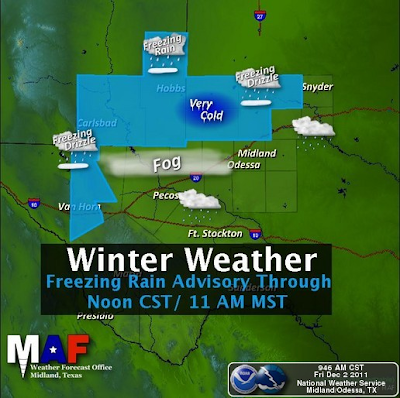 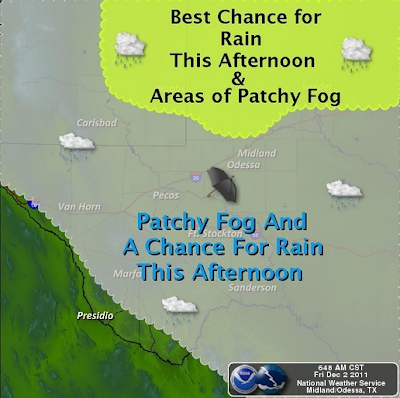 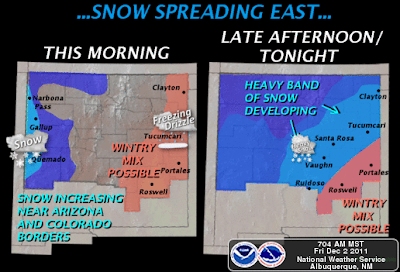 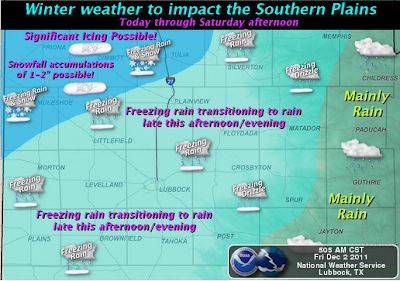 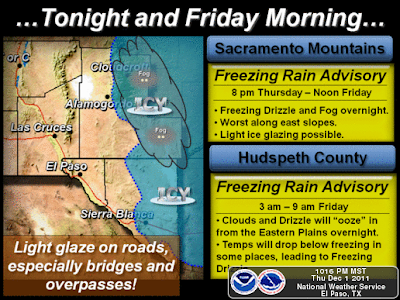 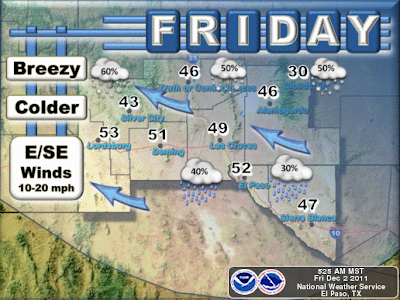 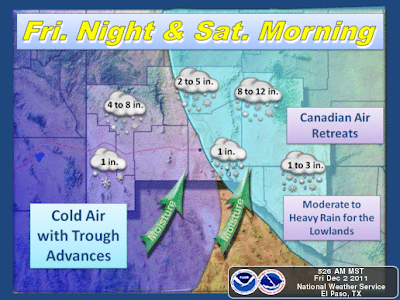 Maps Are Courtesy Of The El Paso NWS Office.
Update 9:25 AM MST.

Good morning everyone. I continue to update my blog as conditions warrant throughout the day. I appreciate the visit. Be safe out there.

Here are the very latest local road problems according to the New Mexico Roads web site.

US 70 between Hondo and Ruidoso has black ice on the road due to light freezing rain and freezing drizzle. US 70 from Kenna to Elida, between mile markers 380 and 398 has black ice also.

At 8:00 CST, the Guadalupe Mtn's Natl Park Service Officials reported that a car slid of off US 62/180 2 miles west of Pine Springs due to icy conditions.
A Freezing Rain Advisory continues in effect for Eddy, Lea, and Culberson Counties until 11 AM MST. The visibilities in these areas may drop down to less than a mile at times. Light icing may develop on area roadways, especially on bridges and overpasses. A High Wind Warning continues in effect until later this morning for the Guadalupe Pass area. Northeast winds of 3-45 mph with gusts near 60 mph are expected. Our forecast high temps today range from the upper 30's to near 40.
A more significant threat for freezing rain is a strong possibility for southeast New Mexico tonight. We are still looking at a mixed bag of rain, freezing rain, sleet, and snow here in Eddy, Lea, and Culberson Counties from tonight into Saturday night.
A very complex and difficult winter storm to forecast is taking aim on the state. Round one of our winter storm is forecast to occur tonight into Saturday. Rounds two and three will occur from Sunday into Tuesday. Cold weather will continue to grip the state into the end of next week.
A deep, and quasi-stationary upper-level low has been parked over southwestern Arizona for the past twenty four hours. It is forecast to open up and move across New Mexico today into tomorrow morning. A second short wave will quickly follow this first one, and enter the state Saturday night. The third short wave is forecast to affect New Mexico Sunday into Tuesday. Long-range models are also forecasting yet another upper-level storm, and even stronger arctic cold front to affect the state late next week.

Winter Storm Warnings continue for Chaves, Lincoln, and Otero Counties. Winter Storm Warnings also cover a great deal of the rest of the northern 2/3rd's of New Mexico. Winter Storm Warnings and Winter Weather Advisories are also out for most of the southern 1/3 of New Mexico.
A Major Winter Snow Event appears to be in the making for many areas of the state today into Saturday. There are some interesting similarities between this storm, and the winter storm that plastered the local area, as well as most of the state between December 13th and 15th, 1987.
Current forecasts indicate that the greatest threat for heavy snow is forecast to develop across the following areas tonight into Saturday night. The Lower Rio Grande Valley- South Central Mountains-Central Mountain Chain-Central High Plains-Sandia/Manzano Mountains-East Central-Northeast Plains of the state. Parts of Southern, Southwestern and Western New Mexico will also receive heavy snow. National Weather Service Forecasters are calling this a potentially significant, if not a Major Snow event for these areas of the state.

A heavy snow band is forecast to occur tonight into Saturday across the Sacramento Mountains eastward and northeastward into the northern southeastern plains, and northward into the eastern and the northeastern plains. Over a foot of snow is very possible in these areas.
Major travel disruptions and road closures and are likely across many of the above mentioned areas tonight into Saturday. Travel across these areas will become difficult if not impossible. This includes the I-40 corridor from Tijeras Canyon to Tucumcari, US Highway 285 from southeast of Santa Fe to Vaughn, and as far south as perhaps Roswell.

Roswell is going to be on the southern edge of this band, of what is being called a potentially major snow event. They may or may not get clobbered with heavy snow. For now they are looking at 2" - 5" of snow with sleet and freezing drizzle mixing in with the snow at times.

Across the southern Sacramento Mountains 6" - 12" of new snow is in the forecast for tonight into tomorrow, higher totals will be possible across the higher peaks. The surrounding lowlands of southern New Mexico could get up to 5", while the El Paso area could see 1" - 2".
The Truth Is Stranger Than Fiction!
Email Post 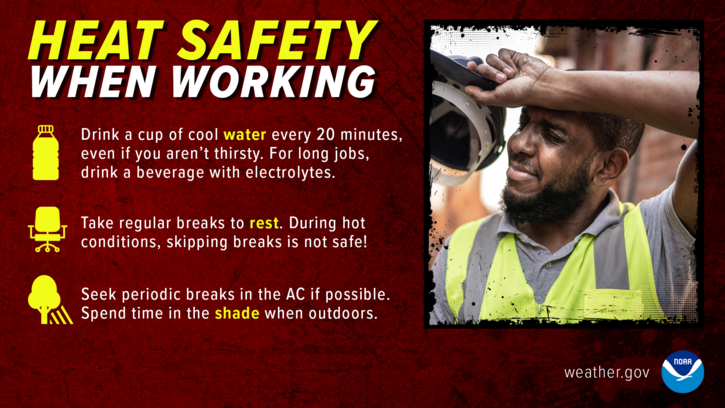 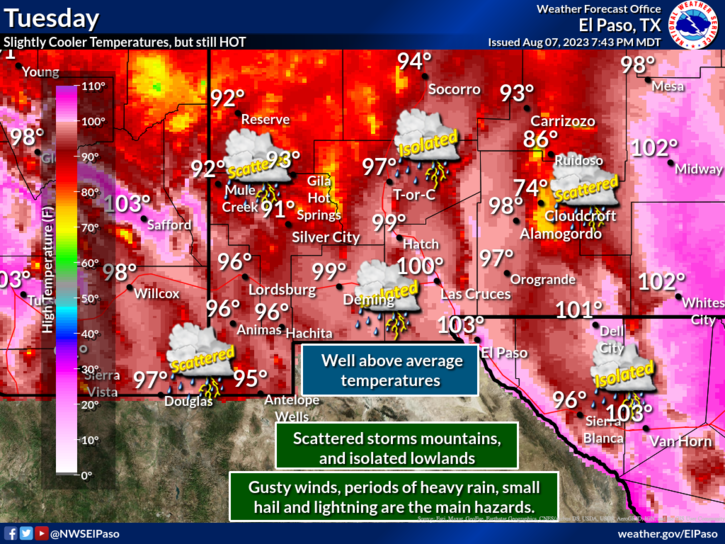 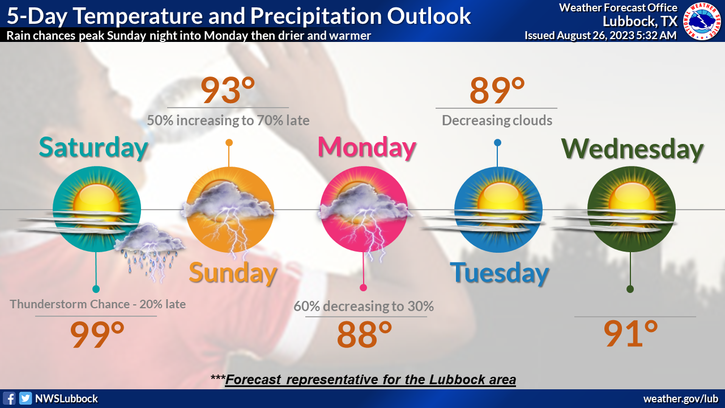