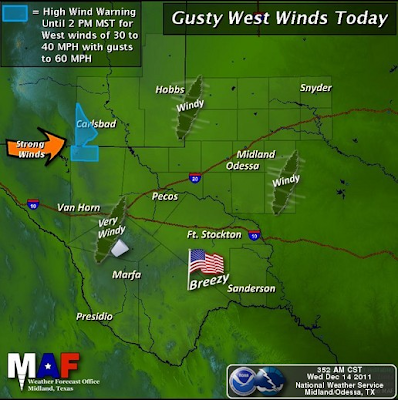 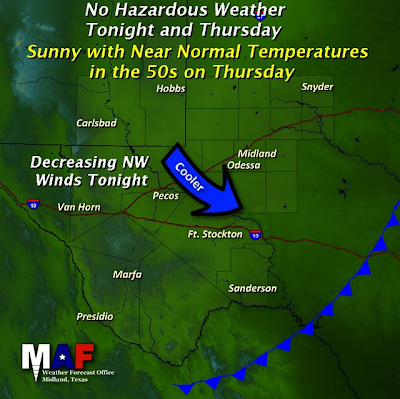 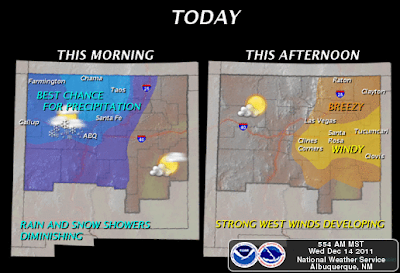 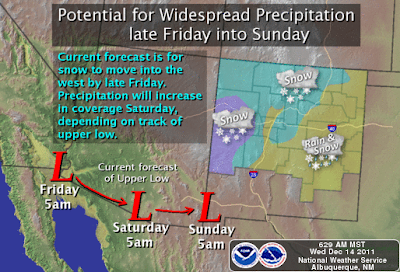 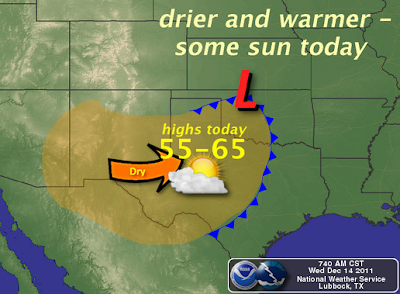 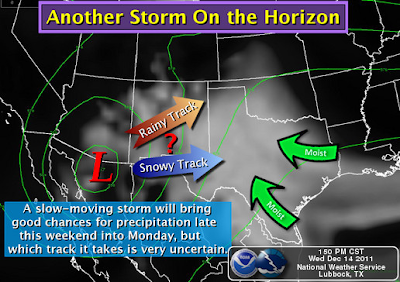 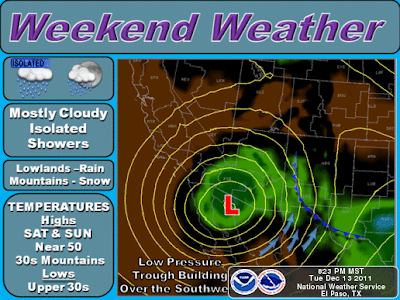 Blog updated at 2:55 PM MST.
Latest New Mexico Snowfall Reports.
Today Into Friday.
Finally the sun is shinning once again, after four days of overcast and foggy skies with lots of drizzle. Not to worry...our "London/Seattle weather" may return again by this weekend.
Our latest winter storm to impact the state is in the process of opening up, and will head east of the state by tonight. A baggy upper-level trough of low pressure will be left behind. This will open the door for our weekend storm to dive southward into the northern Baja California Region by tomorrow night.
Today will be sunny but windy, with westerly winds kicking up at around 20-30 mph with gusts to near 40 mph across SE NM by later this morning. A High Wind Warning remains in effect for the Guadalupe Mountains of Eddy and Culberson Counties through this afternoon for westerly winds at around 30-40G60 mph. Most of us should see our afternoon highs climb up to near 60 this afternoon.
Thursday and Friday will be seasonably cool across SE NM with highs ranging from the low-mid 50's on Thursday, to near 50 on Friday. Mostly sunny skies are anticipated.
Another Weekend Winter Storm. 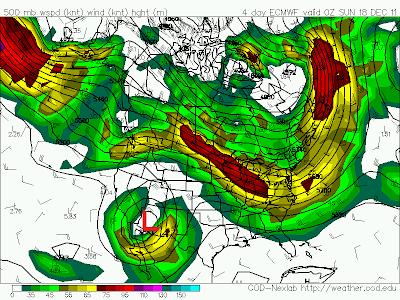 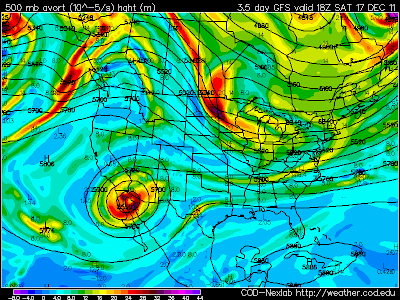 GFS 500 MB Forecast At 11 AM MST Sat Dec 17, 2011.
Both the GFS, and the ECMWF models now agree that a cutoff upper-level low will form over the Northern Baja California Region by Friday. Since this next storm will be "cutoff" from the Polar Jet Stream flow to its north...forecasting its eastward movement is going to be tricky.
This will have a direct effect on what type of precipitation, and how much will fall across the area this weekend into the first of next week. For now it appears that we are looking at the potential for a mixed bag of rain, freezing rain, sleet, and snow over the area. I think that the mountains could end up getting some decent snowfall totals out of this storm, especially since it forecast to take its time moving across the scenic southern route across the area.
Christmas Week. 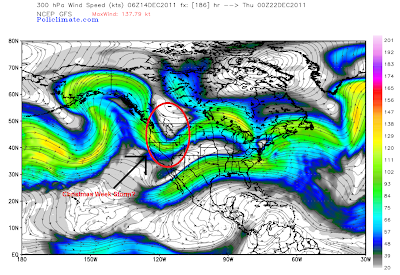 NCEP GFS 300 MB (30,000' MSL) Jet Stream Forecast.
Valid At 5 PM MST Wed Dec 21, 2011.
A split flow in the Jet Stream for the past several weeks has kept one storm after another diving southward out of the Gulf of Alaska and into the Pacific Northwest. These closed upper-level storms then continue southward into the Desert Southwest, where they eventually open up, and move eastward across New Mexico.
The northern branch of the jet stream has been sending wave after wave of cold air southward down the central high plains, and then southward into the eastern plains of the state. At times these cold outbreaks of arctic air have worked their way westward across the state. Combine the two and a winter storm is born. That's the simple explanation of what has been going on with our weather so far this season.
Current model forecasts indicate that this pattern will continue into Christmas week. Yet another winter storm may impact the state by roughly around the middle to end of next week. Again, its simply too far out to try and nail down details of the potential of a white Christmas here in southeastern New Mexico, but its looking really interesting for the state late next week.
The Truth Is Stranger Than Fiction!
Email Post