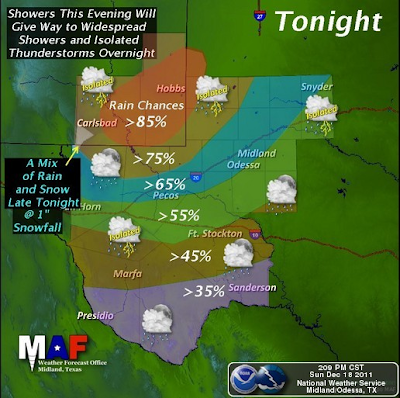 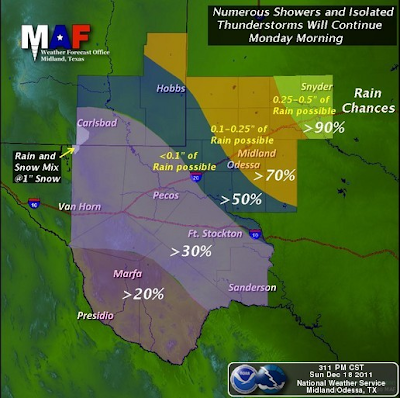 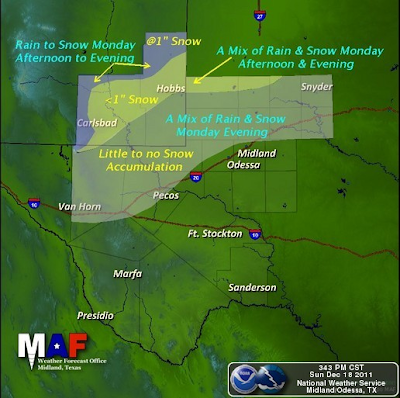 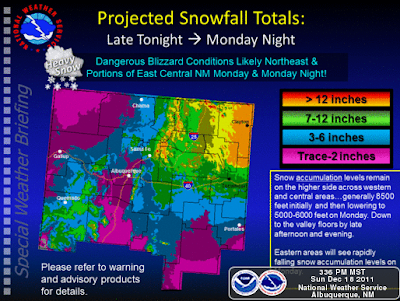 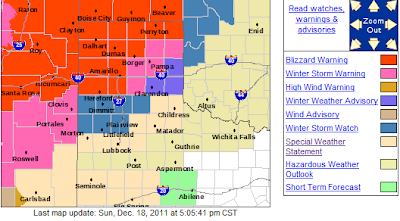 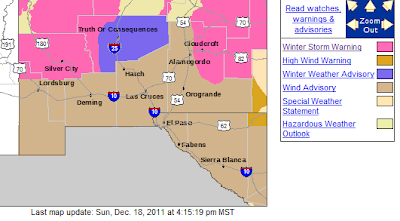 New Mexico hasn't been under a Blizzard Watch since two years ago according to the Albuquerque National Weather Service Office this afternoon. These are fairly rare for the state, which ironically makes them even more important to heed.

I-40 from Tijeras Canyon eastward to the New Mexico and Texas state line, and I-25 from Gloreta Pass eastward, looks to bear the burnt of this next inbound Major Winter Storm. Travel across these areas will likely become impossible in time due to widespread heavy snowfall, blowing snow, and drifting snow. Zero visibilites are expected in the widespread White Out conditions tomorrow into tomorrow night. There are major concerns this evening that this storm is going to catch some people off guard who live are will be traveling in these areas.

New snowfall totals across northeast and east-central New Mexico are expected to be in the 10"- 16" range. Snow drifts of 3' - 4' will likely be common, with significant snow drifts in these areas due to the heavy snow, and northerly winds sustained at 25-35G45+ mph Monday into Monday night. Snow drifts of 5' - 10' (feet) are not out of the question across the northeastern two-thirds of the state!

Again to be blunt folks...I you absolutely do not need to travel north out of Roswell towards the Clines Corners area Monday into Tuesday, and then east or west down I-40, or up the I-25 corridor from Gloreta Pass to the Colorado state line, or across parts of the Texas and Oklahoma Panhandles into southwestern Kansas, then please don't. You could very well be risking your life in doing so in these extremely dangerous Blizzard conditions! Its just a suggestion.

Widespread road closures will be likely across parts of the state tomorrow into Tuesday. For the latest road conditions across the state, please click on this link.

An intense cutoff upper-level low was located near Yuma, Arizona late this afternoon. A few lightning strikes have been noted this afternoon over central Arizona, as well as near Fort Stockton, Texas. Another indicator of a dynamic winter storm.

The models have it slowly working its way eastward, and into southwestern New Mexico near the Boot Heel by around sunrise tomorrow morning. This powerful winter storm is forecast to rapidly deepen over the local area tomorrow, as it begins to ingest the rich supply of low-level moisture streaming northwestward into the state from the Gulf of Mexico.

As the cold core of the upper-level storm moves across SE NM tomorrow afternoon, it is now forecast to intensify from 557dm to 548 dm. The closed upper-level low is then forecast to lift off to the northeast as it opens up and moves into the Texas Panhandle tomorrow night and into southwestern Kansas by Tuesday morning.

Precipitation chances will increase across the area tonight, especially after midnight. There is a good chance of rain, along with a few thunderstorms across SE NM tonight into Monday. The Guadalupe Mountains will start out with rain, which will change over to a rain/snow mix later tonight. 1" -2" of new snowfall is possible across the higher elevations tonight (generally above 6,000') and into tomorrow.

Rain is forecast to mix with, or change over to snow across the southeastern plains of Eddy and Lea Counties tomorrow afternoon. Once again just when this happens will be dependent upon the arrival time of the colder arctic air moving south down the eastern plains.

Current thinking from the Midland National Weather Service forecasters is that we will generally see an inch or less of snow here locally by tomorrow evening. Very windy conditions will accompany the frontal passage tomorrow. North to northwesterly winds sustained at 30-35 mph along with higher gusts will be possible across the lower elevations of SE NM.

The models are a mess with little agreement on the finer details of what is going to transpire with our next two storms. Although the mid-week storm does not look like it will have a lot of moisture to work with, and will be much weaker than tomorrows bear of a winter storm.

Ok, here is my thought for this storm. Take the above with a grain of salt. I have been watching cutoff upper-level lows and closed lows for 35 years now. If I have learned anything, I have learned this. They are one of the most difficult meteorological phenomena to forecast that there is.

They always seem to have a surprise of two in the wings when they move across or close to SE NM. So do not be surprised if there are not some changes to our local forecasts for tomorrow into Tuesday. Any subtle change in the track of the upper-level storm to our west will have a huge bearing on what happens here locally. The same is still true concerning the arrival time of the colder air that will be working its way south towards the local area tomorrow. Thanks for stopping by and checking out my blog. I appreciate it very much.

The Truth Is Stranger Than Fiction!
at Sunday, December 18, 2011