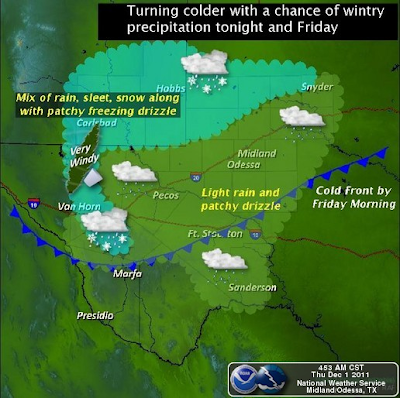 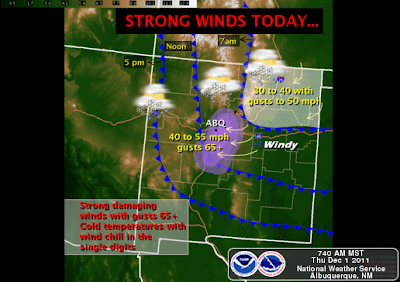 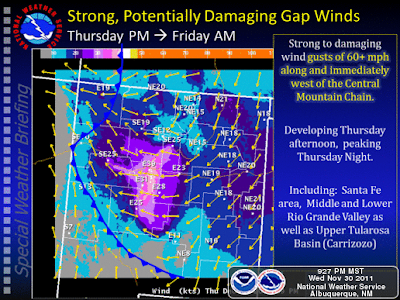 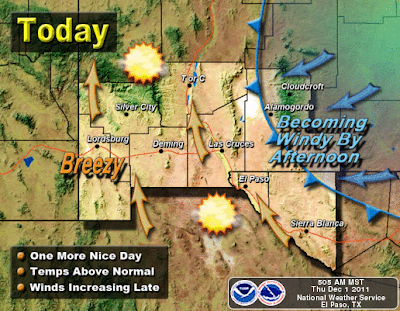 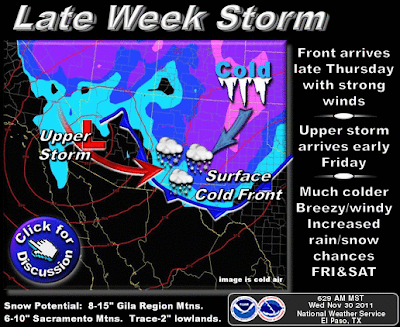 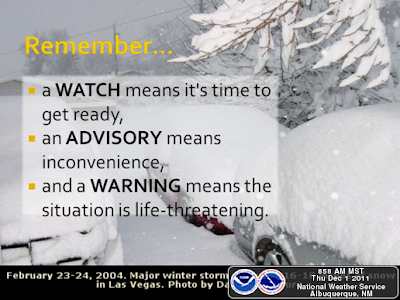 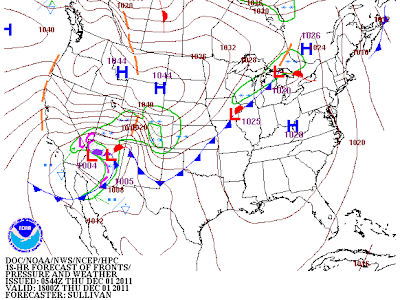 Update at 1:05 PM MST- Click on this link for the latest peak wind gusts reported across the northern 2/3rd's of New Mexico courtesy of the Albuquerque NWS Office.

Update at 1:14 PM MST- At 12:05 PM a measured wind gust to 75 mph was just reported at the base of the Tramway, in the northeast heights of Albuquerque. The highest winds are forecast to impact that area later this evening.

Update at 2:00 PM MST- NWS Midland has issued a Freezing Rain Advisory for Eddy/Lea/Culberson Counties, that will be valid from 8 PM MST tonight through 8 AM MST tomorrow morning.

Light freezing drizzle and light freezing rain may cause some travel difficulties across the affected areas. Visibilities will drop down to less than one mile at times during this time period. This advisory also extends eastward and northeastward to include the Seminole and Lubbock, Texas areas.

Once the cold front arrives, the winds will shift around to the northeast and east at around 20-30 mph with gusts to near 40 mph. A Wind Advisory has been issued for the eastern plains and the Central Mountain Chain. Northeast to easterly winds will gust up to near 55 mph along and behind the frontal passage today.

With falling temperatures tonight, wind chill values will drop down into the single digits and teens across the area. A mixed bag of wintry precipitation is still in our forecast for late tonight into tomorrow. A combination of rain, freezing drizzle and or freezing rain, sleet, and snow, as well as areas of fog and freezing fog are expected. Our high temperatures will likely remain in the 30's tomorrow. A Special Weather Statement has been issued by the Midland National Weather Service Office concerning these events.

Area roadways will likely become hazardous over the state later today into the weekend. Snow, some of which will be heavy at times in some areas, especially across the mountains and east, combined with areas of blowing and drifting snow , will make driving conditions difficult if not impossible. This will be especially true from tomorrow afternoon into Saturday as the first piece of upper-level energy sweeps eastward across the state. For the latest road conditions across the state please visit this site, New Mexico Roads.

A High Wind Warning will go into effect for the Guadalupe Pass Area at 5 PM MST this afternoon and will continue in effect until 8 AM MST tomorrow morning. Northeasterly winds at around 40-55 mph with gusts to 65 mph are forecast.

Some parts of Chaves County may pick up over 6 inches of new snow from Friday night into Saturday evening. Meanwhile the higher elevations of the northern Sacramento Mountains (Ruidoso area) could see over a foot of new snow. Elevations above 7,500' around the Cloudcroft area are expecting 5"-10", while elevations between 6,500' and 7,500' could see 4"-8". Lesser amounts are currently being forecast below 6,500' across the Sacramento's.

A High Wind Warning goes into effect at 11 AM MST this morning, and continues until 5 AM MST tomorrow morning for the Albuquerque Metro Area, the Lower Rio Grande Valley, and the Sandia and Manzano Mountains.

Northeast to easterly winds are forecast to increase to around 30-40 mph this morning with higher gusts. These gap, and over-topping winds, will further increase to 40-55 mph with gusts to 70 mph into early tomorrow morning. Its also possible that the more wind prone areas could receive even higher gusts. This is a serious situation with the potential for damaging winds across the above mentioned areas.

This impending winter storm has the potential to significantly impact many areas of the state from today into the upcoming weekend. A second surge of arctic air is forecast to move southward down the eastern plains, and into southeastern New Mexico Saturday afternoon. This combined with a second upper-level storm that is forecast to close off near southern California Saturday into the first of next week, may keep wintry weather ongoing over the state into the first of next week.

Current thinking is that the heaviest snows will fall Friday night into Saturday along this second arctic cold front as it moves southward down the eastern plains. The heaviest snows may fall along a line roughly from the Sacramento Mountains northeastward, and eastward into the eastern and northeastern plains of the state. Significant snowfall totals will be possible in these areas. Areas of blowing and drifting snow may also add to the travel headaches in these areas.

This continues to be a dynamic and difficult storm to forecast. There could be changes to our local forecasts as new computer model data becomes available later today. Our local National Weather Service Offices will issue their new forecast packages by 4 PM MST this afternoon. I will update my web page by early this evening with these new changes. I appreciate you taking the time to stop by and check out my blogs and web page. Thanks everyone, stay safe.

The Truth Is Stranger Than Fiction!
at Thursday, December 01, 2011