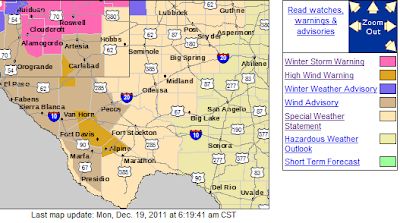 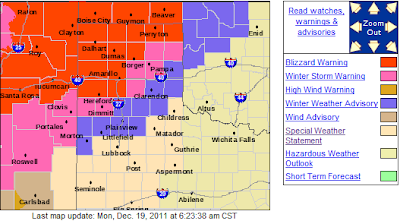 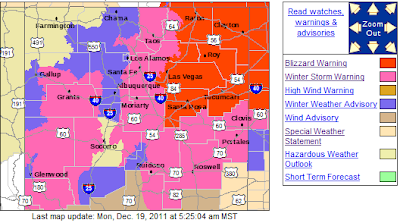 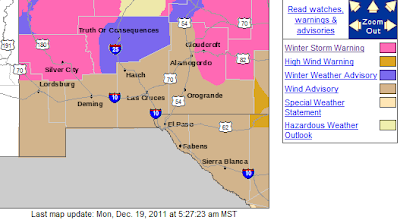 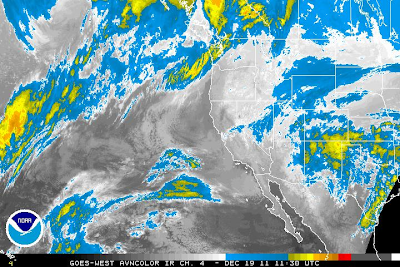 Infrared Satellite Image At 4:30 AM MST. 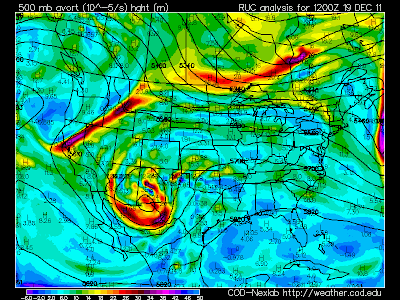 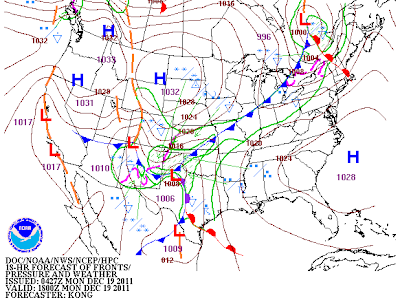 Surface Map Forecast At 11 AM MST This Morning.

I-40 from Tijeras Canyon eastward to the New Mexico and Texas state line, and I-25 from Gloreta Pass eastward, looks to bear the burnt of this next inbound Major Winter Storm. Travel across these areas will likely become impossible in time due to widespread heavy snowfall, blowing snow, and drifting snow. Zero visibilites are expected in the widespread White Out conditions today into tonight. There are major concerns that this storm is going to catch some people off guard who live in the area or who will be traveling in the area.

New snowfall totals across northeast and east-central New Mexico are expected to be in the 10"- 16" range. Snow drifts of 3' - 4' will likely be common, with significant snow drifts in these areas due to the heavy snow, and northerly winds sustained at 25-35G45+ mph. Snow drifts of 5' - 10' (feet) are not out of the question across the northeastern two-thirds of the state!

Again to be blunt folks...If you absolutely do not need to travel north from the Clines Corners area today into Tuesday morning, or east or west down I-40, or up the I-25 corridor from Gloreta Pass to the Colorado state line, or across parts of the Texas and Oklahoma Panhandles into southwestern Kansas, then please don't. You could very well be risking your life in doing so in these extremely dangerous Blizzard conditions! Its just a suggestion.


Widespread road closures will be likely across parts of the state today into Tuesday. This will be especially true across the northeastern 2/3rd's of the state. For the latest road conditions across the state, please click on this link.

An intense closed upper-level low was located near El Paso early this morning. This inbound Major Winter Storm is forecast to deepen over SE NM today as it begins to lift off to the northeast. A few thunderstorms broke out over the area overnight..producing small hail across parts of southern New Mexico. Thunderstorms are occurring early this morning across parts of West Texas to our east.

Much colder arctic air was filtering into northeastern New Mexico early this morning. The cold front should arrive in southeastern New Mexico later this afternoon. Our highs today are forecast to range from the low 40's to near 50 across the local area. Tomorrow will be chilly with highs ranging from the upper 30's to the mid 40's. A brief warm-up is expected on Wednesday with highs in the 50's.

Wrap around moisture, wrapping around the west side, or backside of the upper-level low, will invade the area later this afternoon and evening as the upper-level storm departs off to our northeast. A few more scattered rain showers should dot the landscape throughout the day today. These will mix with, and change over to snow later this afternoon and evening.

Current National Weather Service forecasts still keep our snowfall accumulations to an inch or less here in Eddy and Lea Counties. The higher elevations of the Guadalupe's may pick up a couple of inches of the white stuff. The snowfall will end later tonight as the upper-level storm moves into the Texas Panhandle.

Today is going to be windy with southwesterly-westerly winds picking up later this morning to sustained speeds at around 25-35G50 mph across Eddy County, as well as the lower elevations of Culberson County. As the cold front pushes southward through the area later this afternoon and evening, these winds will switch around to the northwest and north.

Our next winter storm to affect the state is forecast to dive southward and close off near Tijuana, Mexico tonight. It is then forecast to swing eastward across northern Mexico Tuesday into Thursday. A third upper-level storm is forecast by the models to swing across the state Friday into the Christmas weekend. The models are already struggling with this so I won't try and focus on the details just yet.

Another surge of colder air from the north is due to arrive by Thursday or Friday...with the coldest airmass heading our way for Christmas. We still have a chance for seeing a White Christmas here in SE NM.

The Truth Is Stranger Than Fiction!
at Monday, December 19, 2011